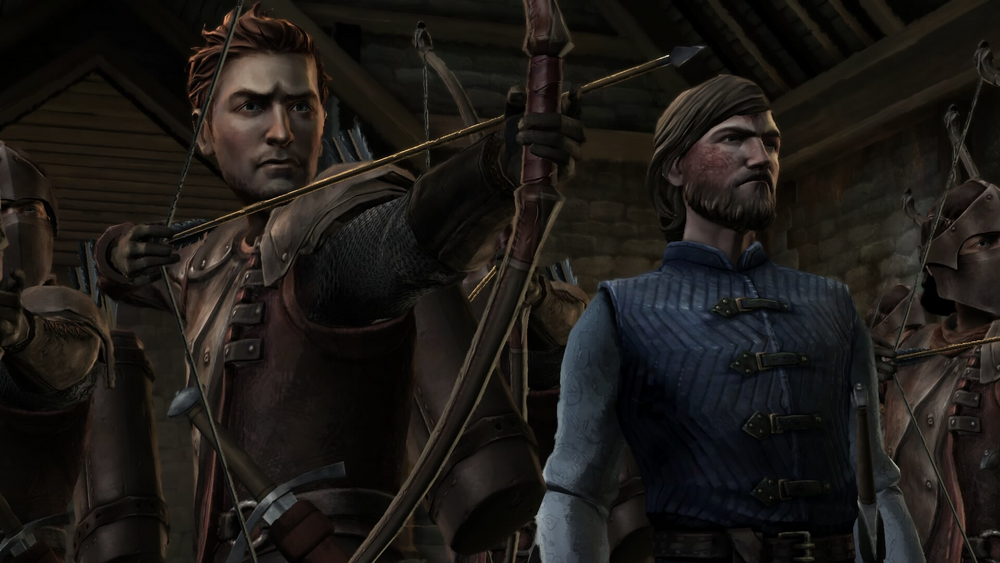 Telltale’s Game of Thrones series follows Stark bannermen “The Forresters” (briefly mentioned in ASOIAF) throughout various settings and stories that have been previously critiqued for mirroring The Starks to a fault. This leads to a sense of predictability of what’s to come that only gets stronger in episode 4 “Sons of Winter.”

The episode opens with Garred Tuttle facing the consequences for killing a brother at The Wall. It’s frustrating that no amount of reasoning or combination of options can dissuade Frostfinger from wanting to take your head, but hey – that’s Game of Thrones. Since there was no reasoning with him, I didn’t even bother wasting my options to kiss ass.

I told him flat out that Britt (the father-murdering, Bolton-serving fuck) deserved exactly what he got. Which, in my episode, was kicking that bastard off the top of The Wall; the highlight of Garred’s story, thus far (in my opinion). Luckily, (and, somewhat predictably) you don’t have your head removed but instead escape with the help of Wildling/Brother: Cotter. As the two of you are escaping, you run into your other Brother with dialogue: Finn, and here is where the first major decision of the game occurs.

[For those unfamiliar with Telltale’s style, it’s a “choose-your-outcome” type, that allows players to act on their own and customize their own episodic experience.]

I will admit, it was a little disappointing that this was Garred’s “tough” decision to make because the choice was pretty clear; going North of The Wall with just you and skinny little Cotter to find the mysterious “North Grove” and you probably wouldn’t get far. That being said, I was with the majority and I brought Finn with me.

The three of you journey on to a wonderful scene in front of the Weirwood tree where you had previously said your vows. You reflect on your new title as a “deserter” and hear the bells that signals the Night’s Watch knows you’ve gone. The three of you flee farther North.

This brings us onto a pack of all female (all Ygritte clones, honestly – they even sound exactly like her!) Wildlings. Cotter says they’re his “people” and can be reasoned with. So naturally, he’s interrogated and you have the choice to reveal yourself. I did, and a fight breaks out as Wildlings are not widely known for their diplomacy. I’m not one for killing women myself, so this wasn’t exactly my cup o’ tea. The action scene itself was well choreographed but it felt like I was stabbing my beloved Ygritte over and over again. Even when the Wilding girl stole the last of our supplies, I couldn’t bring myself to shoot her. I took the shot (and missed) and was left with the parallel of Ygritte/Jon Snow in my mind’s eye. The second part of Garred’s story finds another Wildling who in turn is Cotter’s sister and insists that The North Grove isn’t what we expect.

Onward to my personal favorite story (and playable character), Asher Forrester. Asher is a complimentary contrast to the series as he brings warmth (and dragons) to an already icy story. We open to an exchange with Daenerys (and Viserion – who is wonderfully animated. Great job, Telltale!)

as she speaks with that fire that only a dragon can bring to her. I’ve read reviews where some found her “strangely hostile” but, it’s expected from The Mother of Dragons and her current situation. She asks for proof that you’ve actually seen/interacted with Drogon (as she’s heard similar stories countless times) and you make your decision. I chose to show Drogon’s tooth which brought concern to our Khaleesi. She fears for the safety of her young dragon insisting he is only a child (“a child that can breathe fire!” – Beskha). You strike a deal with The Dragon Queen detailing that if we can infiltrate Meereen for her sellswords to free the slaves, we can use them later to save House Forrester. The action sequences and new location setting bring a freshness to the episode as well as Beskha’s backstory which proves more interesting (again, my opinion) than most of House Forresters. The second part of Asher’s story consists of the action of infiltration and the decision to let Beskha have her vengeance. I was surprised to be in the minority of allowing her to kill her former master as we know Dany is going to do it anyway, so why not. Plus, I was sort of hoping Croft wouldn’t survive the infiltration so how would Dany know?! Dammit, he does and she will (which could null the agreement).

In King’s Landing, Sansa – er, I mean, Mira’s story, was the least action driven of the episode but entertaining nonetheless. Conspiring and eavesdropping on Tommen’s Coronation (which means we are in season 4!) to discover Lord Whitehill’s plan to raise his own private army against The Forresters was a gut-punch shared by Mira and players alike. Also, learning about Lyman Lannister’s drug (milk of the poppy) addiction and seeing Andros turn red after little handmaiden Mira stands up and says she will “destroy” him were both exceptional additions to what could’ve been a stale part of the story.

[Also, the decision in this segment felt rather mute because why would you want to betray Sera’s secret? Unless you take personal enjoyment out of bridge-burning, I was with the majority and kept her secret. Actually, I lied to the old perv and told him that I could vouch for her family.]

Finally, we go back to Ironrath. After submitting to The Whitehills to keep House Forrester safe, it is finally time to take back what is rightfully ours. Elaena Glenmore approaches you with her brother to seek your aid after her father has nulled your bethrothal in favor of Gryff Whitehill (who has spent the majority of the series yelling and kicking your crippled ass). They also lend you their elite fighting force who are trained both in archery and close combat. You re-enter Ironrath as Elaena comments on the status of your forlorn citizens. You hear muffled grunts and cries of agony from The Hall and needless to say, shit hits the fan.

Gryff is beating your Maester claiming he allowed someone of his own to die. You engage with Gryff and have your option of dialogue to start the fight (I chose: come at me, bro!) and nailed that move Royland taught you to put Gryff on his ass. He’s outraged and begins going of as you dramatically signal The Glenmore’s guard by stabbing your cane into the floor. Silence falls after the thud of your cane and the doors burst open and surround the trespassers. Again, your choice of dialogue (“Kill anyone that moves!” queue arrow in the head). Then, the guards hold Gryff in front of you to deliver your justice (well, mine was more vengeance). Again, I was surprised I was in the minority again but I certainly maimed Gryff at least once. I didn’t a second time because, you know, an eye for an eye and I wasn’t trying to blind the world. That, and Lady Forrester and Talia’s looks of sheer horror kept me from such. Instead, I knocked him out as the guards carried him from my sight.

[The second major decision for Rodrick’s story is whether or not The Glenmore’s guard come with you to Highpoint as guard or stay and protect Ironrath. Given we learned through Mira that Whitehill is building an army against us, I had them stay and defend (along with the majority)]

The second part of Rodrick’s story takes us to the second new location of the episode: Highpoint (where the Stark-esque mirroring is considerably strong – you mean, I’m not in the Frey Towers?!) as we are invited by Lord Whitehill and therefore protected by guest right (right…..).

Anyway, this is without a doubt still the highlight of the episode. Whitehill attempts to extort you for your craftsmanship regarding the Ironwood in order to provide weapons to House Bolton…gladly! (Psych – burn in hell, Whitehill!) He basically states that since they still hold your younger brother Ryon hostage (as his “ward”) you don’t really have a choice. In that, we take delight in informing him that Gryff is currently rotting in a dungeon (heard from him, lately?).

He retorts by bringing Ryon out and holds a rotisserie fork to his face stating he doesn’t much care for Gryff. [If you took the time to look at the Whitehill portrait (which, I quite liked. It actually made me feel a small pinch of guilt for maiming Gryff.) then you discover that Gryff was often bullied by his older brothers and his father was always to his rescue because “A Whitehill is still a Whitehill”.] This brings an insane amount of tension as you’re given four choices of action to save Ryon. The first I chose (out of curiosity and I didn’t really take the time to assess) was to fight. This led to the chain of events where Royland chucked an axe at Whitehill’s face (awesome!) then was stabbed through the back (not so awesome) as a rain of crossbow bolts came down taking out Lady Forrester and then you. As you look at her your final word mirrors a former character all too closely (…mother…) and the words “Valar Morghulis” consume the screen in blood red. So, I guess I died? First time that happened. I honestly thought it was part of the story but then I got a second chance! Here, I called his (Whitehill’s) bluff and was spared The Red Wedding scene.

Back to Ironrath as we find it uncomfortably empty and again hear a voice echoing from the hall…this one much more manic and sadistic than Gryff. We open the doors to find none other than Ramsay Snow sitting with our sister. It’s a given that this does not bode well for House Forrester as last time Ramsay was here, he stabbed you in the throat. 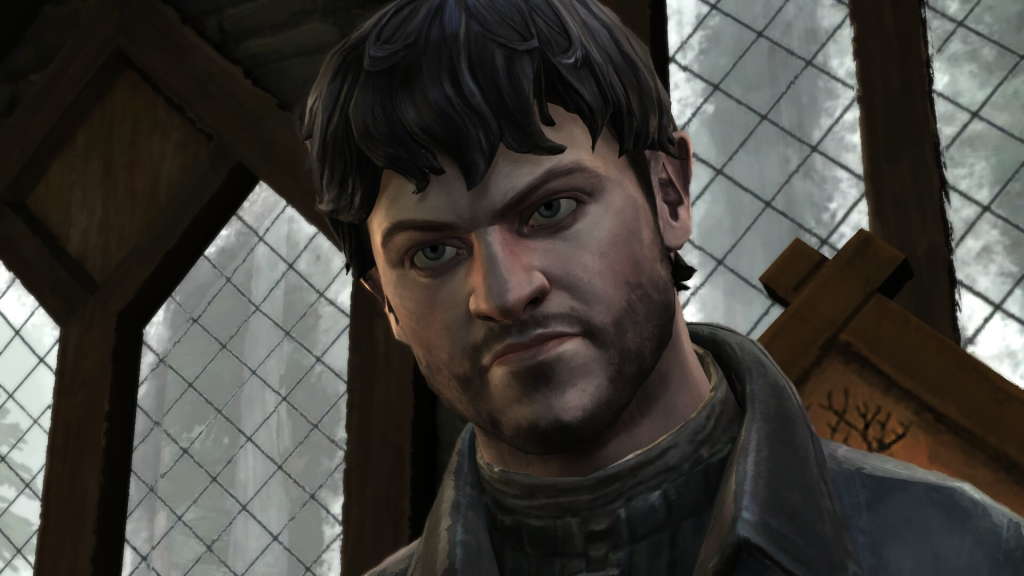 All in all, I found it to be a very solid episode. It wasn’t my favorite, per se, but I did still enjoy it.

– predictability, mirrors (if not copies) The Starks

– all female Wildlings (unless this has meaning later)

– some of the bigger decisions weren’t very impactful

My ranking of the episodes so far:

The episode left me still pretty eager for the next installment: A Nest of Vipers. I was originally hoping for some Martells considering the title but the teaser has me a little deflated. Either way, I’m sure it will still be an enjoyable penultimate episode to get my Game of Thrones fix after Season 5 concludes.

Thanks for reading! I know we have some readers that also play so comment with your choices and what you thought of the episode below!