Sophie Turner talks Sansa's future on Game of Thrones, Amanda Peet stops by Conan and more | Watchers on the Wall | A Game of Thrones Community for Breaking News, Casting, and Commentary 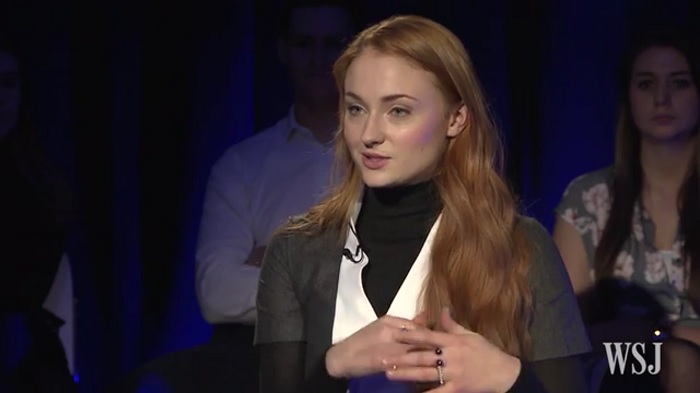 Sophie Turner teases Game of Thrones season 6 and Sansa’s future in a new Wall Street Journal interview. The actress discusses the depiction of women on the show, the new season and more.

On Conan this week, Amanda Peet (aka Mrs. David Benioff) talks to Conan O’Brien about Jon Snow and dream Game of Thrones roles.

The Game of Thrones cast also lay out what they can and cannot promise you if you win the lottery to attend the season 6 premiere and after party (hint: don’t get your hopes up for a flaming sword).

Talking to WSJ, Sophie Turner says that in season 6, it “feels like everything is kind of coming together,” with characters “forming alliances” and “coming towards the same goal.” She addresses the controversial wedding night from last season, plus Game of Thrones‘ depiction of women on the show, and declares GoT to be a “feminist show.”

Turner says that for Sansa, this season “is about her taking charge and being a leader.” She notes that Sansa is “really going to thrive this season.”

Amanda Peet chatted with Conan O’Brien about their ideal roles on Game of Thrones and the ultimatum Peet gave her husband, David Benioff, over Jon Snow ‘s fate.

Members of the Game of Thrones cast appeared in a video to remind fans to enter the lottery for the chance to attend the season 6 premiere and after party in Los Angeles and what the winner can (and cannot) reasonably expect out of the experience.