Sophie Turner and more return to Belfast, and a Game of Thrones location is confirmed! | Watchers on the Wall | A Game of Thrones Community for Breaking News, Casting, and Commentary 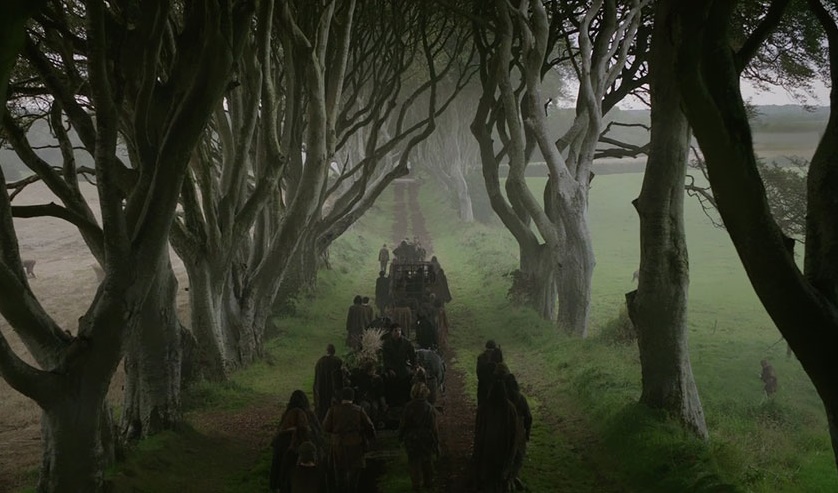 We’ve rounded up the newest Game of Thrones cast sightings today, and we have an update for you all about a season 7 filming location.

Lately, signs have been popping up indicating something might be afoot soon at the Dark Hedges in Northern Ireland. As we’ve previously reported, the Hedges will be closed October 13th through the 16th but it wasn’t clear whether it was for GoT or not.

Today, IrishThrones‘ local sources came through and confirmed for them that Game of Thrones will indeed be returning to the famous tree-lined lane that stands in for the Kingsroad on the show.

Though the Dark Hedges are a popular site for tourism, don’t bet on getting close to shooting. The area will be shut down for filming, the farmland surrounding the lane is privately owned, and will very likely be heavily guarded during the GoT shooting.

Now comes the speculation time: who will be traveling through those hedges just outside of King’s Landing? Really there’s no way to tell. Let’s just pick a name out of the hat and go with…how about Gendry, just because.

In cast sightings news, we have several main cast members in the Belfast area this week. In addition to reports of Emilia Clarke and Kit Harington in town, one fan visiting the Paint Hall mentions she met “Jaime Lannister” (Nikolaj Coster-Waldau) today. Elsewhere, Alfie Allen has turned up posing with a fan in Belfast at a hotel:

And with a few others yesterday at a restaurant in the city:

Another fan was lucky enough to meet Sophie Turner and Aidan Gillen both today!

That moment when you’re greyer than Aidan Gillen ????? Jokes aside, Aidan remembered me from last year before I even said anything ? and he said he’s gonna do another reading in London over the Christmas period (though not at the Globe) yay!

As you can see Sophie is still blonde. At this point, I think we have to accept that she’ll be wearing a wig to play Sansa in season 7. I just hope they set aside a nice chunk of the budget for top of the line lace fronts, because the transition from real hair to wigs after six seasons might be very distracting.