The Three-Eyed Raven has sent new messages today via the Sight, and fans are receiving their glimpses of the future (and seasons past) even as I type. Once again, the Sight includes images teasing Game of Thrones season 5, while also showing images from past years that are likely relevant to the coming season.

Descriptions of the Sight visions, and a video are tucked below the cut!

There are two visions going around so far.

UPDATE: A new HQ copy of the first vision:

WotW reader Greatjon of Slumber has provided a description of the video as well:

–The damned raven again
–A man’s hand reaching out to be shaken – this one does not look familiar, but I think that’s because I’m forgetting where it’s from.
–One of the dragon eggs being placed on a fire (Season 1)
–Underwater shot, clear blue sky above it. Someone jumping or diving into the water. This looked new as I don’t recall Kit or Rose being shot from an under-the-water-jumping-in during “Kissed by Fire,” or at any other time, for that matter.
–Winterfell covered in snow. At first I thought this was new, but it looks too much like Sansa’s version of the castle, down to the Heart Tree looking like a withered stick. I think it’s from Mockingbird.
–One of the dragons flying in the distance
–The camera peering around a corner into a room where a man is sitting, back-lit. If I had to guess, it’s Sam, but it’s very hard to tell at all.
–A hand grasping a ledge of some kind, perhaps a boat
–Someone using sticks on drums (Possibly season 1, unclear)
–A man riding a horse along side a beach (new)
–Water cascading down a flight of stairs (new, I believe)
–Fire
–Overhead shot of Sansa in her bed from First of His Name

-The hand shake: I believe that was Locke’s hand reaching out to Jon in ep. 404
-The person jumping in the water from beneath: Grey Worm jumping into the water in ep. 408
-The snow castle: Sansa’s in ep. 407
The person ahorse was definitely from the shooting on Portstewart Strand. Potentially a Sand Snake.

The under-water shoot is from Meereen, Unsullied jumping in the water. A man giving his hand to shake is Jon and Mance. Water down stairs is new, also the hand on the boat looks like Arya’s.

Dany (old footage)
Grand Sept of Baelor
child’s hand playing with stag toy
Theon as Reek – a new shot from S5, it looks like
wine goblet spilling from Jaime and Tyrion’s scene last season
Moon Door open?
Olly sparring in the Castle Black courtyard- new, I believe
Melisandre (old footage from season 2, I think)
arrival of the Dornish lords from season 4
a dock by the water, with sun glinting on the water (unsure if new or old)
a dragon crying out

WotW Reader Mike has sent us these screencaps of the second vision: 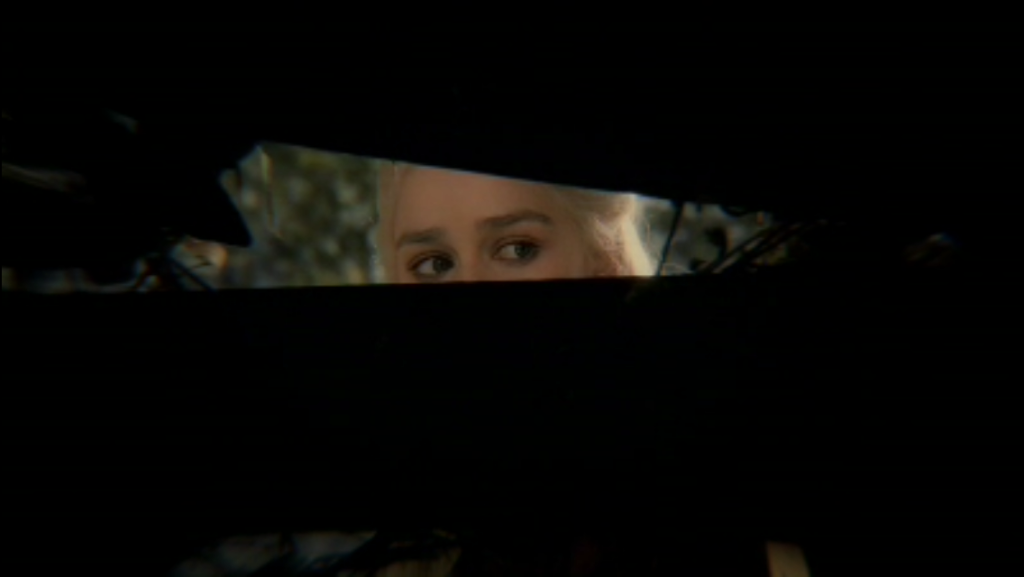 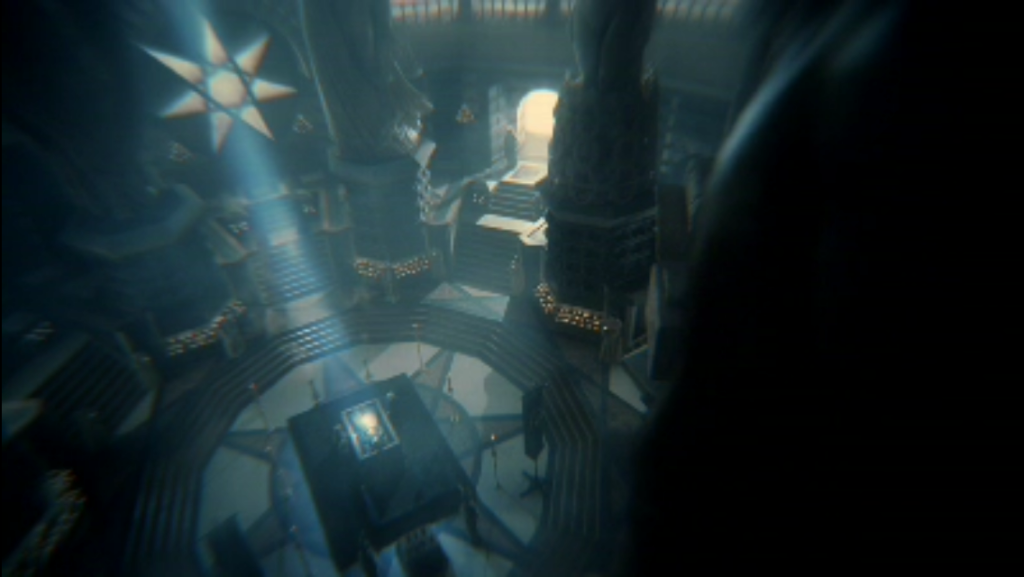 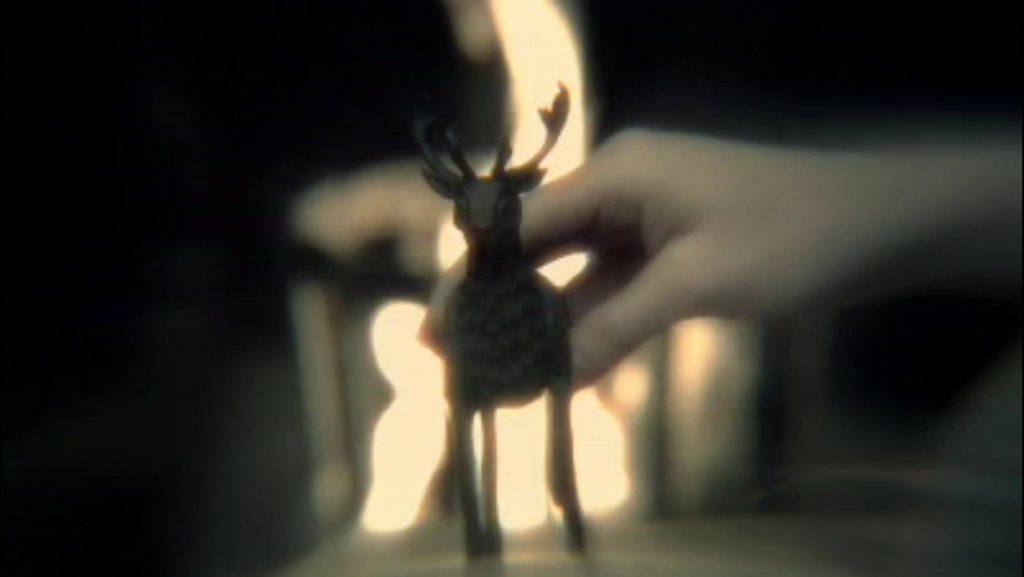 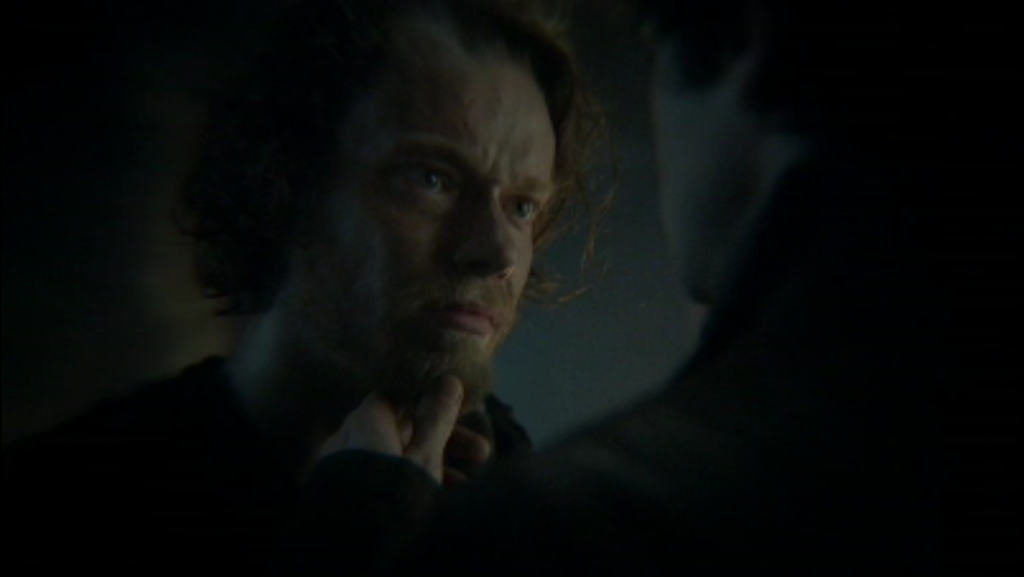 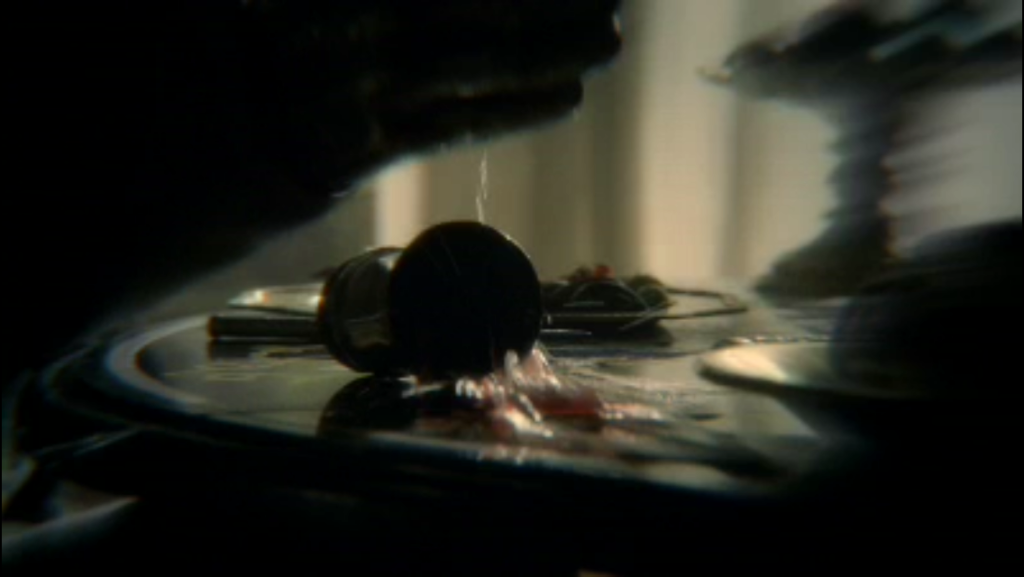 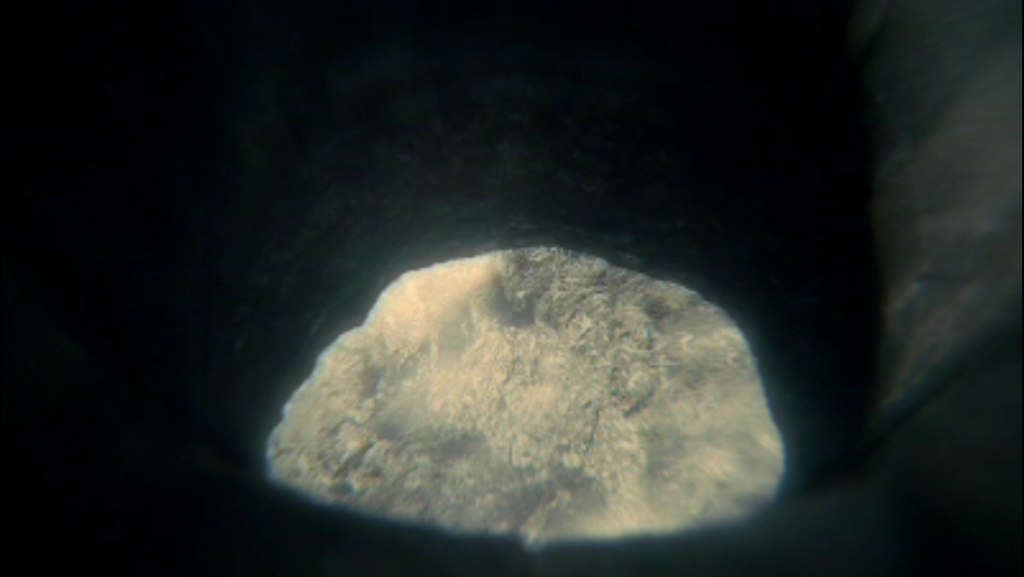 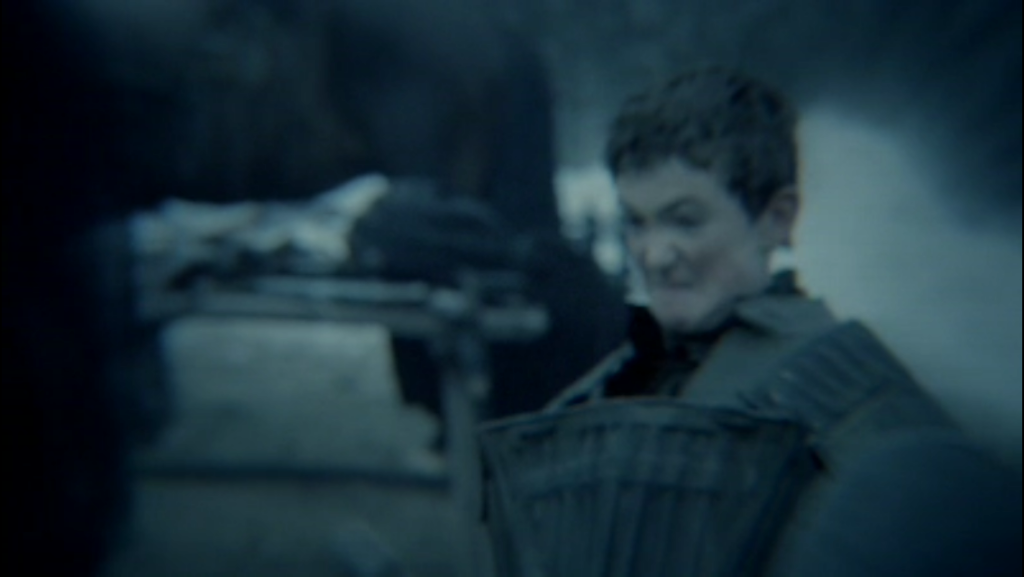 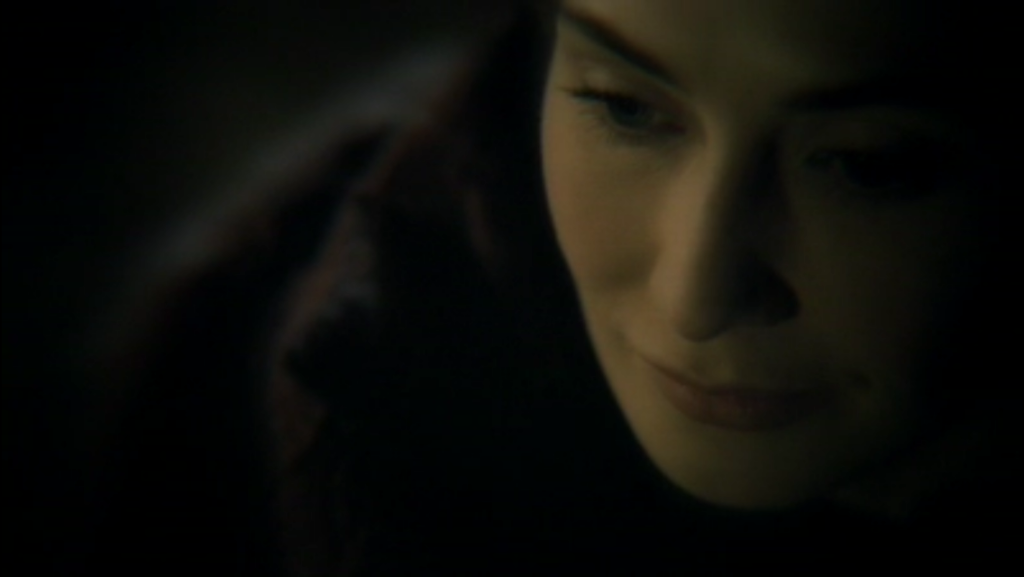 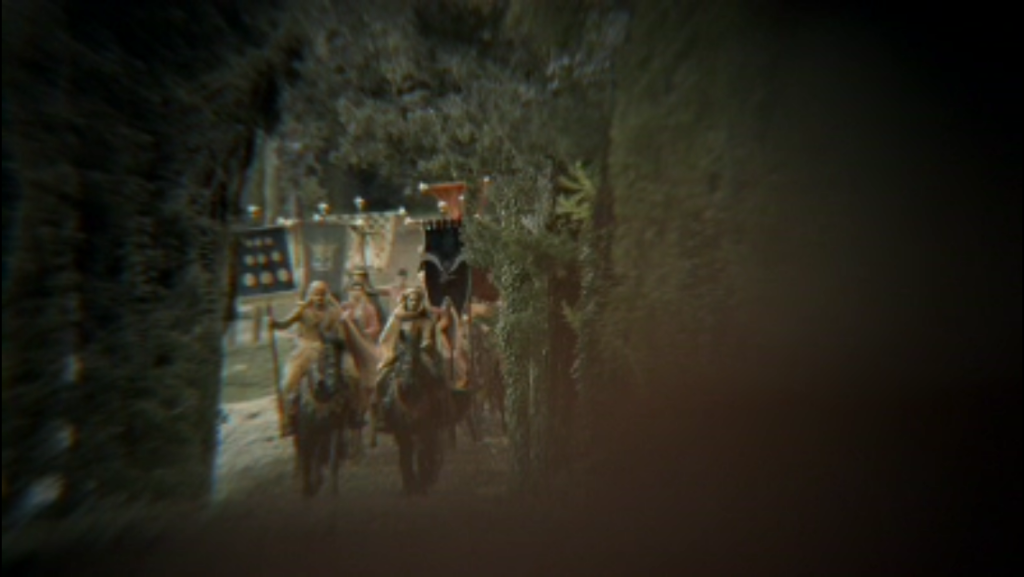 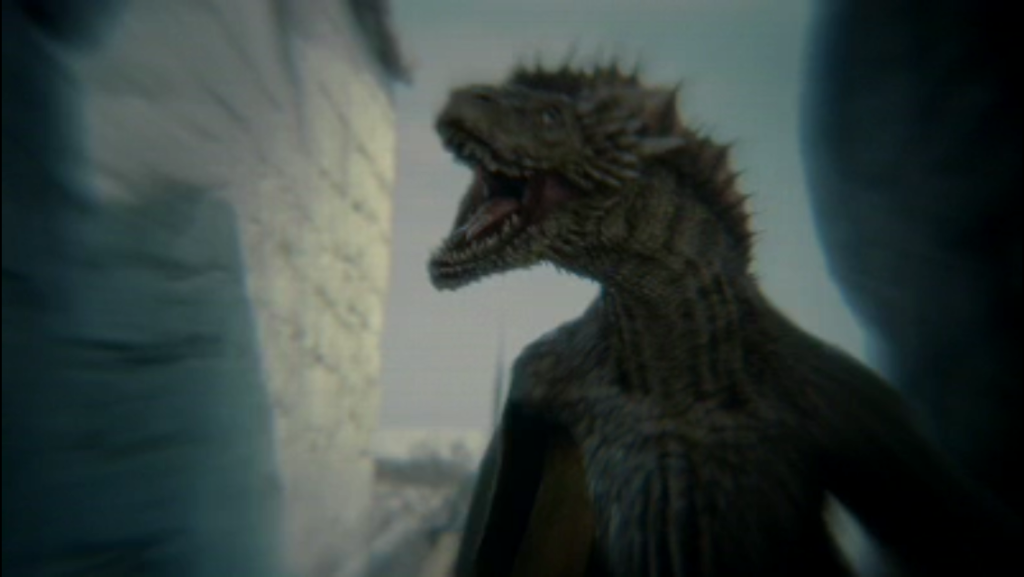 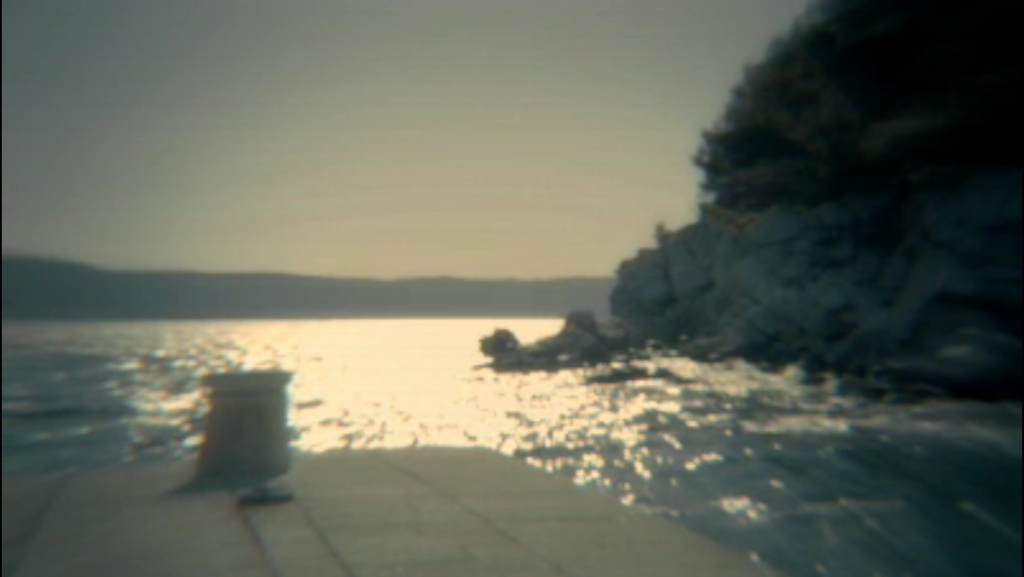 If anyone’s going to a showing of the Game of Thrones IMAX Experience tonight, be sure to report back on the season 5 trailer!