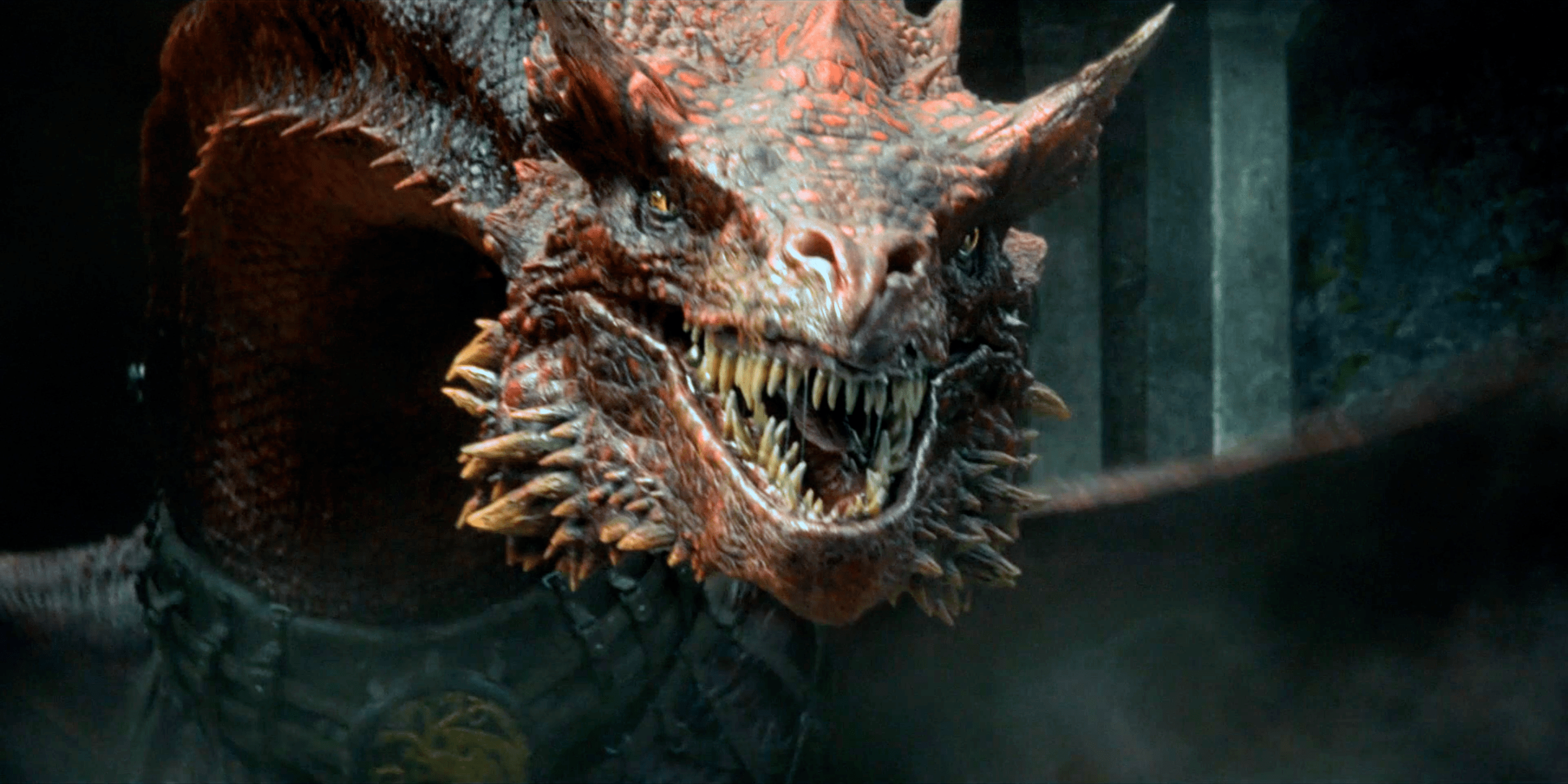 In the latest barrage of press interviews, House of the Dragon showrunners share their favorite scenes from this first season; the untamed dragons that freely roam Dragonstone are teased for the future; Matt Smith and Emma D’arcy discuss how Rhaenyra and Daemon use High Valyrian as their secret language; and more.

At SlashFilm, co-showrunners Miguel Sapochnik and Ryan Condal describe their favorite scenes to shoot, which are what they’re the most excited for people to see: Sapochnik highlights what he calls the “Eye for an Eye” scene, the confrontation between Alicent and Rhaenyra we’ve seen in so many trailers. In this scene featuring the famous Valyrian steel dagger that would later be used for deeds both villanous and heroic in Game of Thrones, “Emma D’Arcy [Rhaenyra Targaryen] and Olivia Cooke [Alicent Hightower] get to go at each other for the first time in a fit of rage that’s been building for seven episodes.” Filming that scene took quite an emotional toll on both actors. Condal’s choice is from the following episode, during “a hearing over a certain succession, not for the throne”, in which “everybody comes into the room carrying a lot of baggage from all of the things that happened over the course of the season”, ending “in such a shocking moment that I think will be on the list of the top five most memorable moments.” If you’ve read Fire and Blood, you may have clocked this has to do with a certain Vaemond Velaryon. And, if they’ve done that moment justice, I can’t help but agree with Condal!

Also, Matt Smith explains what it means for his character, Daemon, to privately speak with Rhaenyra in the language of their ancestors, High Valyrian: “He’s a different person in that language … [T]hat’s who he is at his core. And the fact that he speaks it only to Rhaenyra is really telling.” Emma D’Arcy agrees: “It forms an envelope around them and plucks them out of the world and takes them to a different plane or somewhere incredibly private. Even if they were in public, it creates an immediate intimacy and privacy.” At ScreenRant, Darcy has nothing but good words for his High Valyrian-speaking co-star: “[Matt] has such a gift for finding freedom on camera. He doesn’t want to know what happens. He wants to surprise you; he wants the thing to live. And as soon as I understood that, not only is he a gift of a scene partner, but it’s also a privilege to know what someone needs.”

Finally, at Entertainment Weekly, co-showrunner Miguel Sapochnik is joined by the dragonriding cast in talking extensively (and effusively!) of the many dragons in the show — from how the director had the cast interact with the imaginary creatures in order to depict the special relationship between dragon and dragonrider to the many different designs they came up with to differentiate them: “There’s the dragons that are dinosaur-like; they have a big bridge on their nose. There are the dragons that are canine, which usually have the convex feel to them; they feel wolf-like. And then, there’s the dragons that are like horses, which are somewhere in between,” the director says, before suggesting Vhagar, the only surviving dragon from before Aegon’s conquest, as an example of how to set each of the creatures apart: “She’s like a cantankerous old lady. Bits of her are falling off, and getting her in the air is a nightmare. When she’s up and running, she’s like a B52 bomber. She’s stunning and a force to be reckoned with. Landing her is a nightmare.”

Perhaps most interestingly to readers of Fire and Blood, although there had been a lot of speculation that all or some of the wild dragons that roam Dragonstone could have been cut from this adaptation, it appears that’s not the case! Although we won’t see Sheepstealer, Grey Ghost or the savage Cannibal this year, they were designed for the next season along with the rest. And they’re Sapochnik’s favorites!