Shooting dates and extras casting in Girona, Spain for Game of Thrones confirmed | Watchers on the Wall | A Game of Thrones Community for Breaking News, Casting, and Commentary 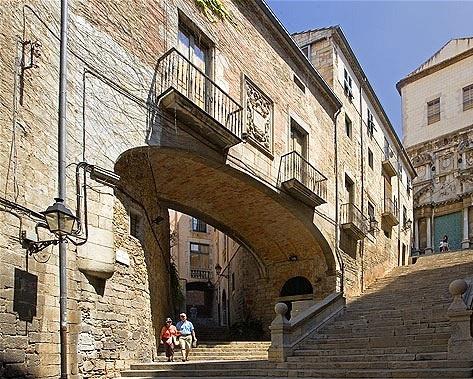 Today’s Game of Thrones season 6 news: a notice posted on Twitter by Modexpor Casting provides a great deal of information about the hunt for extras in Girona. Modexpor, who handles GoT‘s extras throughout Spain, will be looking for people in the city on June 29th and 30th, from 9AM to 8PM both days.

As we discovered last year, thousands will sign up to be extras on Game of Thrones, but the company can only screen 1200 men and 1200 women from the applicants in Girona. The precise final number of extras sought in the city is not known.

Rehearsal and filming in Girona will take place with extras from September 3rd through the 18th of this year, according to the casting notice.

What location info can be gleaned from the Girona casting call? Well, it’s different than the Spanish casting calls last year, when applicants all had to be dark-haired. That suggests Girona will not be Dorne or Meereen but may stand in for other locations. With the city’s old quarter streets, it could easily be a part of existing GoT places like King’s Landing or Braavos, or stand in for a new location such as Oldtown.

We have heard from multiple sources of ours that Game of Thrones isn’t using Dubrovnik and Croatia in general quite as much this year, so it would make sense to have some of that location shooting shifting to Spain, as the show needs fresh places to film.

The casting call itself from Modexpor Casting, with more information: 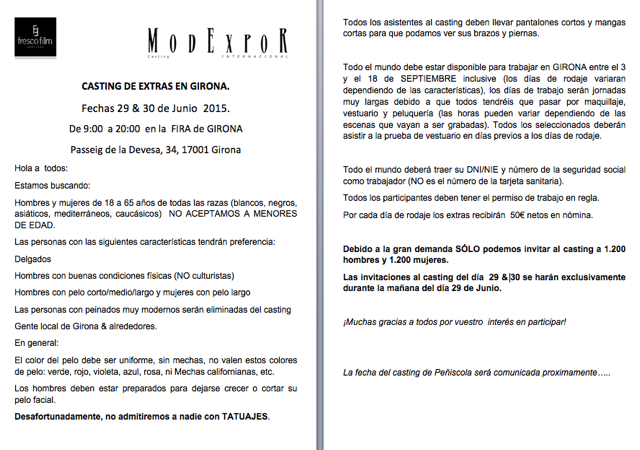 Some highlights from the extras casting call:

at the Fira de Girona

Specifically, they’re searching for people who are between 18-65, all races, and with these characteristics preferably:

People should have hair color that’s uniform, without streaks, no hair colors that is: green, red, purple, blue, pink, etc. (Editor’s note: Non-natural colors and looks, essentially.)
Men should be prepared to be grow out or cut their facial hair.
No tattoos.
People attending the casting should wear shorts and short-sleeved shirts so casting can see their arms and legs.
People must be available to work in Girona from September 3rd through the 18th. Working days will be very long hours because they go through makeup, costumes and hairdresser (times vary depending on the scenes rolling).
Due to high demand we can only invite the casting to 1200 men and 1200 women.

Invitations to the casting on June 29th and June 30th will be made exclusively on the morning of June 29th. People seeking more information on extras casting should contact Modexpor.

Additionally, the casting date for Peñíscola will be communicated shortly.

A couple weeks back, it was reported that there would be extras casting on July 1st and 2nd. Perhaps that will be that Peñíscola casting?

As reported yesterday, extras casting in Almería, Spain will take place on July 9th and 10th.

Thanks to Los Siete Reinos for the heads up on the casting notice!