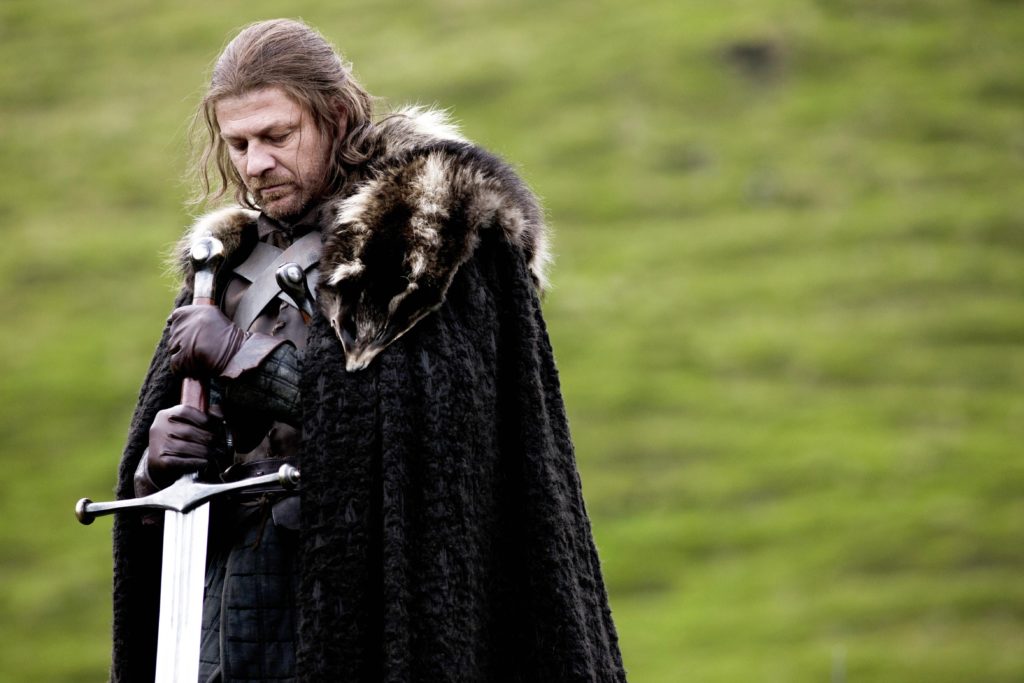 To go forward we must go back. Well, okay, “must” might be too strong of a word. Still, it is fitting that, mere months before the final season of Game of Thrones airs, we get a peek at the script of the very first and much maligned Game of Thrones pilot that-never-was.

Bill Bradley of the Huffington Post recently paid a visit to George R.R. Martin’s collection at the Texas A&M’s Cushing Memorial Library, where Martin’s been depositing drafts of his work for years. There, Bradley found a production draft of that ill-fated Game of Thrones pilot that never aired.

Bradley reported that, after reading the script, he had two takeaways:

Bradley did not upload the entire script online. However, from the snippets that he has provided, we can appreciate some of the most apparent differences between the original pilot and the version of “Winter is Coming” that we got.

While the conversation between Ned and Robert at Lyanna’s tomb plays out more or less the same as it does in the official pilot, what follows is a bit different.

The incineration of Robert’s feather would have precluded Sansa from returning it to its place in season 5 (a small but meaningful character beat, in my opinion) and its significance as a symbol of Jon’s parentage and/or Bran in the season 8 teaser. However, this act of Cersei’s offers us insight into her relationship with Robert and Lyanna that, in final version of season 1, we don’t get until much later.

*Sigh* Okay, let’s get into this. In this more faithful adaptation of the scene from the book, Khal Drogo gives Daenerys the opportunity to refuse him. Thus, Daenerys has agency when she chooses to have sex with her new husband. In the version of “Winter is Coming” that we got, Daenerys is given no such option and she is raped.

This is one of those controversies that I generally avoid like the plague. But, while we’re here, I’m just going to point out that there’s no indication in this production draft that the show planned to omit the other rape scene between Khal Drogo and Daenerys in episode 2 … the one that’s also in the books in which Daenerys buries her face in her pillows to muffle her screams.

My point is, sexual violence is a part of Khal Drogo and Daenerys’ relationship in both the books and the show and their dynamic has always been more complicated than what can be extrapolated from the wedding night alone.

Continuing the trend of uncomfortable sex scenes, the twincest that Bran walked in on was originally going to be much more disturbing.

Ugh. Reading this makes the rape scene in season 4 feel sort of inevitable, as if the writers didn’t understand the significance of Jaime ignoring Cersei saying “stop” from the get go.

On a lighter note, the original pilot was going to introduce the fully developed language of the White Walkers, which David J Peterson dubbed “Skroth” 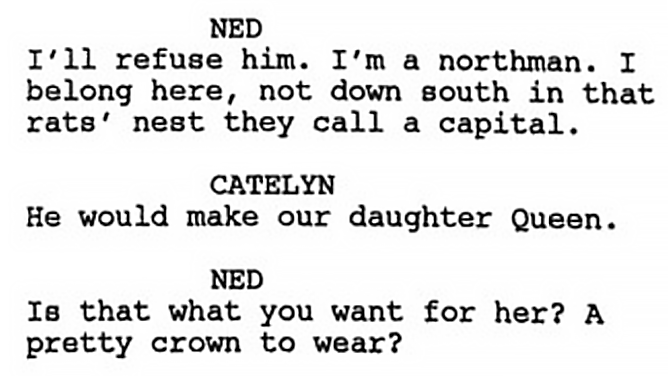 Giving Catelyn royal ambitions for her eldest daughter would have certainly established Catelyn Stark as a very different sort of character than the one we eventually got. It’s not clear in Bradley’s article but I have to assume that the original pilot did not include Catelyn’s pre-feast conversation with Sansa which establishes the mother and daughter’s different stances on moving to King’s Landing.

There are more differences uncovered by Bradley- check them out at HuffingtonPost.com!

So, what do you think about about the production draft of the unaired pilot? Tell us below.