One of the major highlights of the latest episode of Game of Thrones was the long-awaited Tower of Joy scene. The epic fight sequence features a youthful version of Ned Stark and his friends taking on Targaryen-era Kingsguard knights in an effort to reach his sister Lyanna in the tower.  This week, Robert Aramayo, the 23-year-old English actor who brought young Ned to life speaks with Access Hollywood and The Hollywood Reporter about taking on the iconic role originated by Sean Bean.

“I don’t think I can comprehend how lucky I am to be able to play such an iconic character, such a loved character,” the actor tells Access Hollywood. He says that he loves Game of Thrones. “It’s the only show that I watch religiously, and it was an honor and a gift to be able to be a part of it.”

On transforming into the younger Ned, Aramayo tells AH he didn’t try to impersonate Bean. “He sounds very earthy and gritty and grounded and stuff, so I just had to sort of think about where that comes from in terms of your voice and sort of trying to find that within myself because the last thing that I wanted to do is sort of impersonate Sean. I didn’t want to do — in the strictness sense — an impersonation of the man. I wanted to think more about Ned, and him years before the Ned that we know so well and the things that a younger man possess that an older man has figured out. So, that was really where my work was situated was in figuring out the parameters that surrounded this scene, this moment in time.”

Though witnessing the scene along with Bran, we learned that Ned’s defeat over Ser Arthur Dayne wasn’t necessarily as heroic as people have always been told, or as honorable as some would have assumed. But how the Tower of Joy’s fight played out may have a big impact on Ned’s character. Aramayo explains, “I do feel like that’s a lesson learned for Ned about like honor and beginning to sort of — because the told story is that Ned beat Arthur Dayne, which is of course, certainly in the portrayal [in ‘Oathbreaker’], kind of untrue, really. And I think that speaks to how honor began to sort of operate for Ned and I would argue that in the [subsequent] years, he would live his life from an honorable place, having been dishonored in this moment.”

Aramayo was aware of the significance of the Tower of Joy among the Game of Thrones fandom.  Quite the weight to be carrying for the recent Juilliard grad who was new to television. He tells Access Hollywood, “‘Game of Thrones’… was the first time that I’ve been on a television set. … It was scary. I didn’t know what to expect, but thankfully everybody — everybody’s been very lovely. And when you do something like this, which is very sort of spoken about, the Tower of Joy is spoken a lot amongst fans of the show, and readers of the book — it’s a very heavily spoken about event in history, so you just endeavored to sort of like give it everything you’ve got and hope that the people who’ve been waiting for this scene, respond in – have gotten everything that they need from that scene.”

There’s even more at the source so be sure to check out the complete article at Access Hollywood!

The Hollywood Reporter also has details to share on the actor, including more about his background as a fan of the show, sharing it with family and friends. 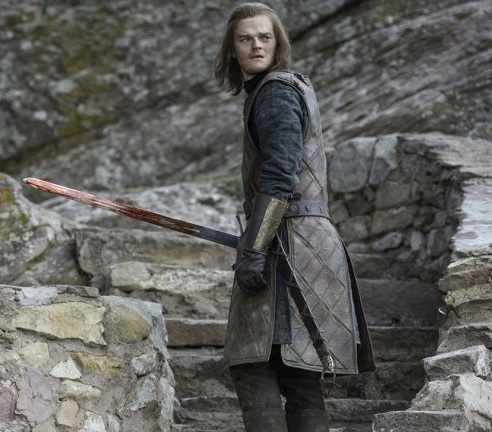 “I’ve watched the series since the beginning, since I was 17, with my dad. We were watching it from the beginning when it first aired in the U.K., and we were hooked,” he tells THR. “I’ve watched it ever since. Ned was always my favorite character. I was distraught when he left the show. I didn’t think it was possible. I didn’t think they could do that — killing such a well-loved character was such a shock to me. I’ve always felt very sad that Ned left the show so quickly. He was such an impactful character on the story, and still is to this day. I haven’t read the books, but I have a big circle of friends who are avid book readers, so that was very useful when I was cast in the role.”

Aramayo explains he didn’t know it was Ned he was auditioning for when he read for the part, but after winning the role, he watched season 1 scenes again to get a feel for Ned. “I was especially keen to watch the fight between him and Jaime Lannister (Nikolaj Coster-Waldau), because that’s a great example of the way that he fought.”

For research purposes, he did also turn to the written material. “I read the [Tower of Joy] scene in the books. My friend was kind enough to show it to me. My best friend is a very avid book reader, and he wrote down on four sheets of paper everything that I was not allowed to forget.”

(This sounds like something one of us would do, quite frankly.)

And most importantly, he speaks on creating the epic fight scene:

We all went through a bunch of training, which continued through our three- or four-day shoot in Spain. It was intense. It was not easy. I did not find it easy to shoot that fight sequence. It’s not an easy routine at all. And Luke Roberts [who plays Arther Dayne], he’s incredible, man. What a badass, dual-wielding swords and fighting four guys at the same time and dispatching three of them. It was fantastic to delve into that kind of work, because it’s the same…playing a moment in a fight is just like playing a moment as an actor. You have to have an intention. If your move’s getting blocked, you obviously can’t know that, just like when you’re playing a scene through dialogue. You can’t know the response your scene partner gives you is going to be the response you’ll get. You hope it is. Likewise, in a fight, if you’re going to chop somebody’s arm off or stab them in the gut — the intention is to chop that arm off or stab someone in the gut, and you have to play that intention fully. I didn’t expect it, but it takes a lot of skill in terms of acting to play. That’s why I feel the stunt team is so talented, that they can pull off telling you what you’re going for, that this is what you’re going for, and hopefully you’ll get it.

Aramayo’s hard work paid off and he did one hell of a job as Ned. Game of Thrones has an amazing track record when it comes to casting and the show’s award-winning stunt team.

By the way, there’s lots more interesting info and background in The Hollywood Reporter‘s piece so I recommend checking it out!