Review: My Watch Has Ended with a bittersweet finish | Watchers on the Wall | A Game of Thrones Community for Breaking News, Casting, and Commentary 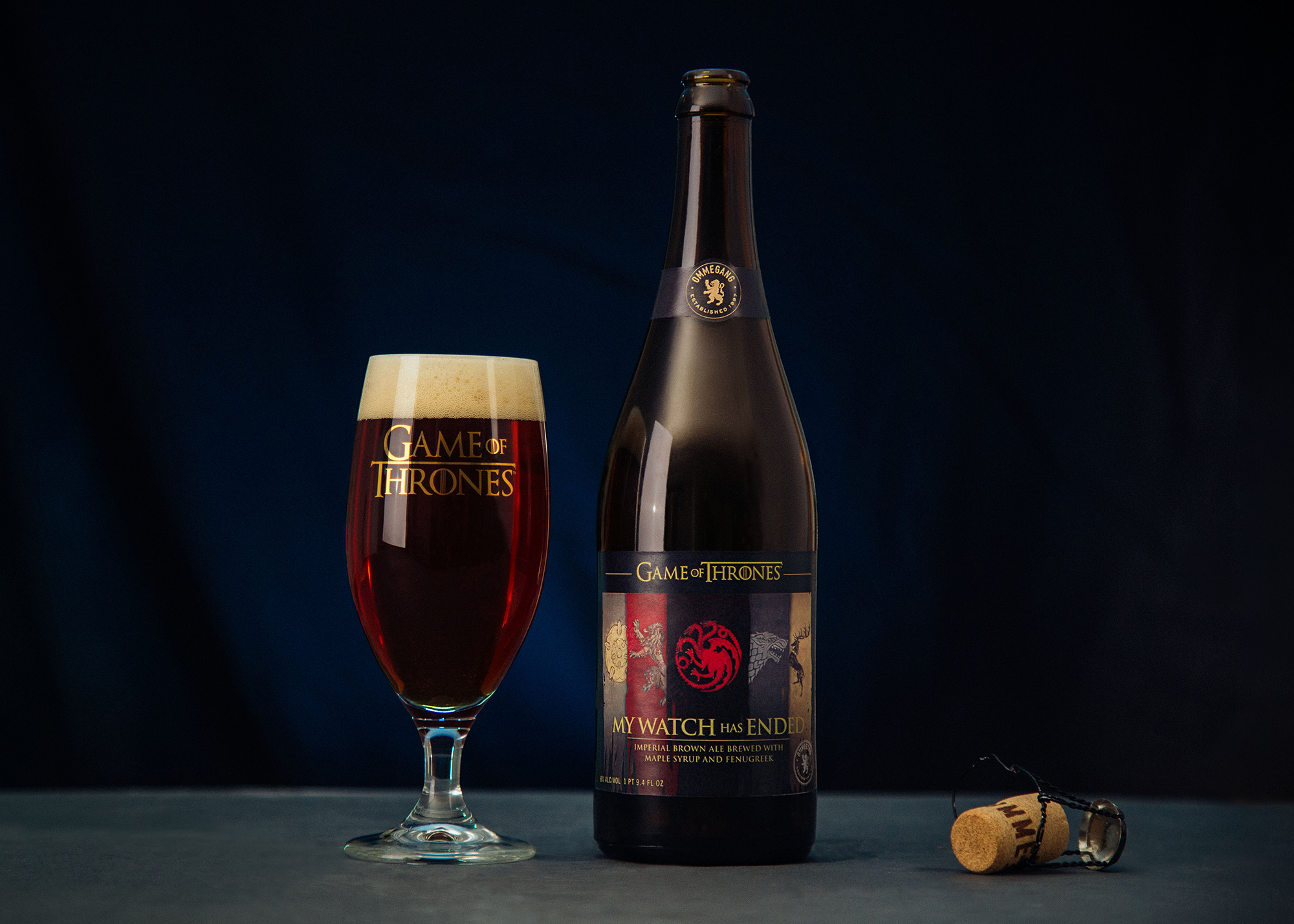 Game of Thrones has come to an end, our long watch has finally come to a close. To mark the passing, Brewery Ommegang has delivered their final installment in their series of Game of Thrones-inspired beers with the poignantly titled “My Watch Has Ended”.  This last in the series is an Imperial brown ale brewed with maple syrup and Fenugreek.

As Ommegang describes it:

My Watch Has Ended is brewed with two-row base malt, specialty grains such as oat flakes and chocolate malt, plus maple syrup and fenugreek, an herb with a maple-like aroma and flavor. Hopped with Hallertau Magnum and Styrian Golding varietals and fermented with an English ale yeast, with aromas of sweet maple and caramelized sugar, the beer pours a rich mahogany. Notes of cocoa and toffee and a smooth, velvety mouthfeel finish dry, with gently smoldering roast.

As is a running gag in my previous reviews, darker beers are generally not my go-to, yet I’m always excited when Ommegang presents us with a reason to give a new taste a shot. They have an endearing way of taking what you think you know about a beer variety and then giving you brand new take on it. The previous entry, For the Throne, was a golden ale co-fermented with pinot grigio and Viognier grape juices, and although I had no idea what that would taste like, it became one of my favorite ones they’ve made.

Before we get to taste, let’s take a moment and talk about the packaging and bottle design. 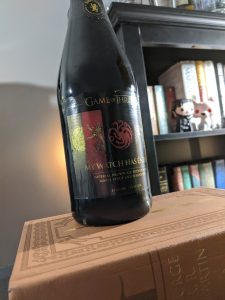 Over the years Ommegang’s Game of Thrones bottles have become collector’s items, with people even finding buyers for the empty bottles. Their original designs were more typical of what you see in craft beer with stickers on the front and back, a ring around the neck, and a corked top held on with a wire cage in a brown glass bottle. The Royal Reserve Collection was more experimental using blacked out bottles, bottle caps, and simple yet distinctive color schemes. My Watch Has Ended though returns to the original design showing off a label featuring the House Tyrell, Lannister, Targaryen, Stark, and Baratheon banners across the front. A bit busy, and makes the lettering hard to read but a welcome return for their final entry in the series.

Onto the contents of that bottle, which at first reminded me heavily of their previous offering, King in the North Imperial Stout. It has a very similar dark color, almost black, and also the same tan foam head which dissolves away quickly. The smell surprised me; from the bottle promotion of maple syrup and fenugreek (an herb often used as a maple syrup flavoring) I wondered if it would smell like pouring pancakes into a glass. Instead you get a pleasant aroma of caramel, cocoa, and a little bit of coffee which again reminded me of the King in the North stout. 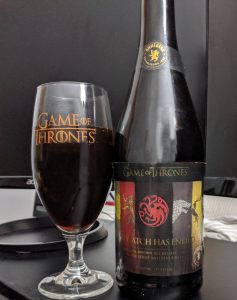 The taste starts off very smooth with very little bitterness and no hard liquor bite unlike previous beers such as Hand of the Queen. Which makes sense- My Watch Has Ended is 8% ABV ale compared with the King in the North stout which had a direwolf-sized 11% ABV. Very quickly you get the maple syrup and fenugreek showing up in force, offsetting the small bitter taste. It’s like the brewers at Ommegang read my previous reviews and my dislike of bitter dark beers and made one for me. The taste is not something very sweet, it comes off more as a smooth inviting taste. Generally with Imperial ales and stouts, I have to remind myself to take a drink and brace myself and can sometimes get that feeling of a never ending glass due to small drinks. My Watch Has Ended is far more inviting and drinkable though, and found it disappeared much quicker.

The flavor mixture is fantastic, and the aftertaste lasts for quite a while like The King in the North with similar pleasant results. And again, Ommegang has gotten me to drink and end up enjoying something that I probably would not pick up from the shelf based on the description. That’s the real greatness of their Game of Thrones collaboration. Just by engaging with the collectibility of Thrones you end up trying a far wider range of tastes and styles than you normally would.

George R.R. Martin has been on record saying that the end of his book series will have a bittersweet ending and I can’t help but feel that’s what Ommegang tried to make with My Watch Has Ended. The beer is a little bitter, a little sweet, and leaves you wanting more. It is coming to your local stores soon, and will be available on draft and in 750 ml bottles (suggested retail price of $11.99/bottle).

Also coming soon, in December, will be a re-release of the popular Take the Black Stout, Fire and Blood Red Ale, and Winter Is Here Double Wit beers in holiday packs complete with glasses. You can use Ommegang’s handy beer finder on their website to help you find these products near to you.