Peter Dinklage loves fan theories, but assures nothing is revealed in Doritos commercial | Watchers on the Wall | A Game of Thrones Community for Breaking News, Casting, and Commentary 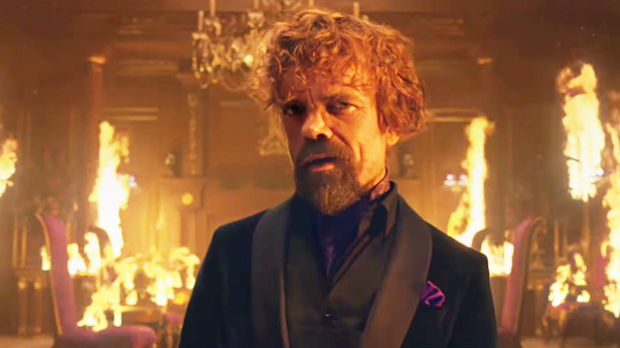 Peter Dinklage was on fire in a recent Super Bowl commercial, which had the internet rife with speculation that it was confirming a long-held fan theory about Tyrion Lannister’s true parentage.

Thanks to its early release on Jan. 30, we knew we’d be seeing Peter Dinklage and Morgan Freeman in the rap battle to end all rap battles in a joint Doritos/Mt. Dew commercial for Super Bowl LII — what we didn’t know was how far people would run with a long-held Game of Thrones fan theory after watching it.

The cherished notion that Tyrion Lannister is a secret Targaryen (thanks to the Mad King taking “liberties” with Tyrion’s mother, Joanna Lannister) has been around for years, but it took off again faster than a speeding dragon after the commercial aired during the game on Feb. 4. In it, Dinklage lip-syncs the words to Busta Rhymes’ famous “Look At Me Now” as the room erupts in fire thanks to spicy Doritos Blaze chips (Freeman’s half has him rapping along to Missy Elliot’s classic “Get Ur Freak On” as the room becomes encased in ice due to his chilly Mt. Dew).

Twitter and other corners of the internet went crazy, with people proclaiming that the commercial was a not-so-subtle hint at Tyrion’s true parentage, but when HuffPost asked Dinklage about the fervor on Monday, his response aimed to bring down the enthusiasm a notch or two.

“I love every single theory the fans of our show have, because they’re so much fun,” he said. “They get to show the dedication and love they have for the show, but you have to understand that it is a Doritos commercial.”

“[Fans] are sort of stretching the limit with that theory when you’re branching out to Frito-Lay commercials,” he added. “But I say that with all love and respect. Please, I love them. I love the fan theories that they have until the show is finally over.”

So there you have it — no major reveals about Tyrion’s heritage via Doritos commercial. Or perhaps this is all an elaborate ruse, and Dinklage and Thrones are secretly working with Frito-Lay to hide a bombshell of a message! We can dream, can’t we?