Game of Thrones preparations in Spain roll along this week, with the next stop in the Valencian town of Peñíscola planned for tomorrow.

According to ModExpor International, who handles extras casting in Spain, Game of Thrones will be hunting for locals in Peñíscola on July 6th to take part in filming the show this fall. The announcement provides hints as to what locale the town might stand in for, and also provides the shooting dates this October. The casting notice: 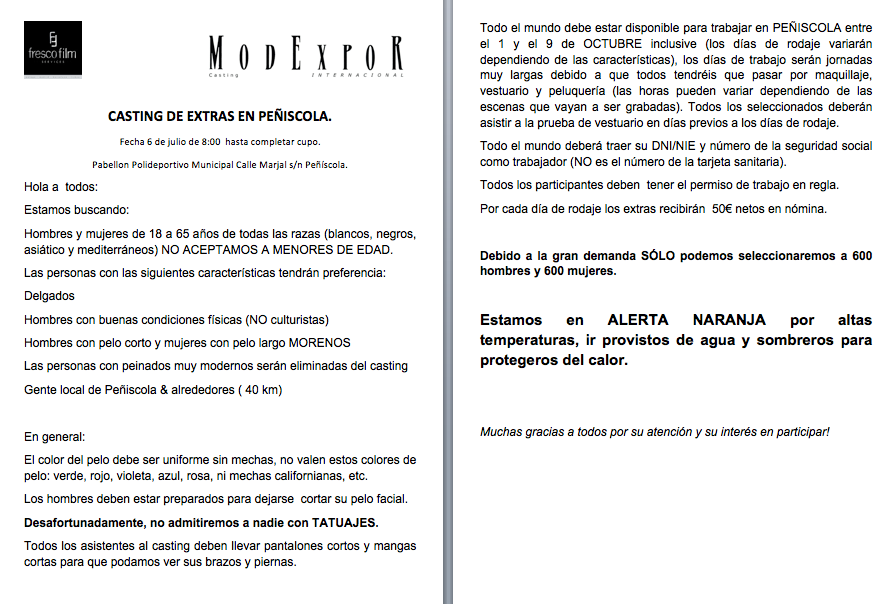 The announcement says that that on July 6th, starting at 8:00 AM, ModExpor is searching for extras at the Pabellion Polideportivo Municipal Calle Marjal in Peñíscola.

They’re looking for men and women ages 18-65 of all races (white, black, Asian, and Mediterranean are mentioned on the casting announcement)

They prefer applicants to be or particularly looking for extras that are:

Thin
Men in good physical condition (No bodybuilders)
Men with short hair and women with long hair (dark-haired preferably), with no modern hairstyles or unnatural colors like green, purple, blue, pink, etc.
Men may have to cut their facial hair
No tattoos and they will be checking arms and legs.

Extras will be booked from October 1st through 9th, and so this confirms the shooting dates in that area. There may be some rehearsal time in there but it’s safe to assume most of this is the filming schedule.

The announcement concludes with the statement that, “Due to high demand we can only select 600 men and 600 women.” It doesn’t specify whether this is the initial screening number or if this is the final number of extras they will be booking. 1200 would be a very large of extras for a final amount, however.

The broadness of the casting call in some respects but still preferring dark hair suggests Meereen/Essos, to me. The interiors of the castle could be used in a variety of ways, of course, and the castle itself reminds me of some of the fortresses we saw in Croatia.