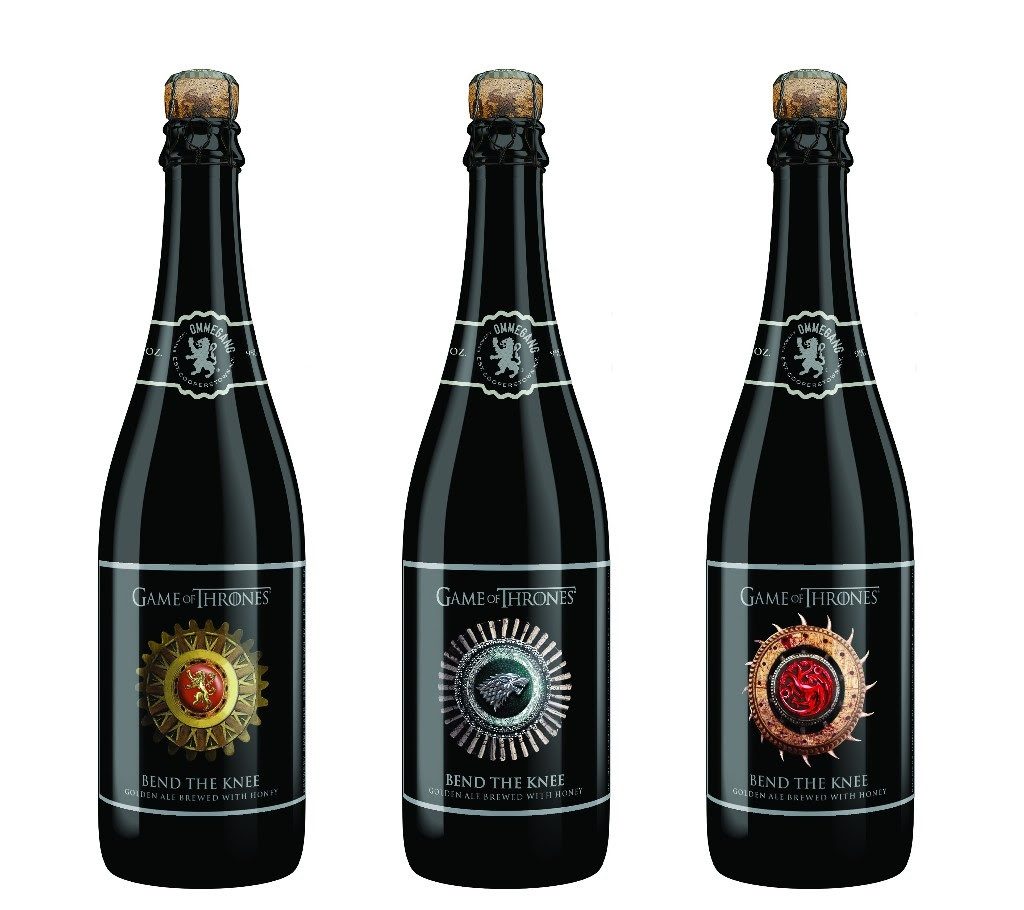 Arriving in stores, your front porch, or your very best dreams is the newest beer in the Game of Thrones series from Brewery Ommegang and HBO Global Licensing: Bend the Knee Golden Ale.

“Pils malt, flaked oats, Saaz, Bravo, and Styrian Golding hops all work together to create a beer that’s equally as complex and exciting as the Emmy Award-winning series,” Ommegang says of their latest offering.

Ingredients aside, what are some first impressions of Bend the Knee, especially compared to the previous Game of Thrones brews fans have sipped and savored? The name of the beer and the talk of great houses struggling for power on the label is deceptive! If nothing else, Bend the Knee is delightful. This heady, warm ale puts a shandy to shame as a lovely summer beer; it’s like fluttering butterflies over verdant greens of Highgarden. 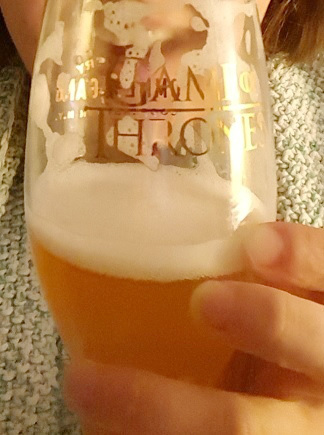 Bend the Knee has a welcoming aroma less bold than Ommegang’s other Belgian brews. Under a layer of thick, swelling foam in one of the gorgeous Ommegang Game of Thrones glasses (10/10 recommend) is a honey-colored beer, apt since the label says it is brewed with honey. Don’t worry about sipping a mead; there is a ghostly, ephemeral sweetness lying on the edge of Bend the Knee’s flavor that hovers on the tongue between sips, barely noticeable.

There is a sneakily enjoyable aspect to this beer that hides under a first taste. It’s lace: airy and pleasing, complex and well-crafted.

As one keeps drinking, a bit of a bite developes in the aftertaste. This brief bitterness doesn’t detract from the beer at all; it’s always pleasing to see a brew that has some surprises. Some of the most disappointing beers, well, just lie there flavor-wise. A solid beer is ambrosia of the gods in this reviewer’s opinion, with an ability to beguile, envelop and surprise.

Stray observation: The texture seemed different to me than the other brews. No value judgment here, just another quirk of this beer.

Bend the Knee is the kind of beer that I would take out on a screen porch on a hot summer day and sip in the shade, watching dandelion fluff pirouette in the wind and dragonflies zoom through the emerald grass. 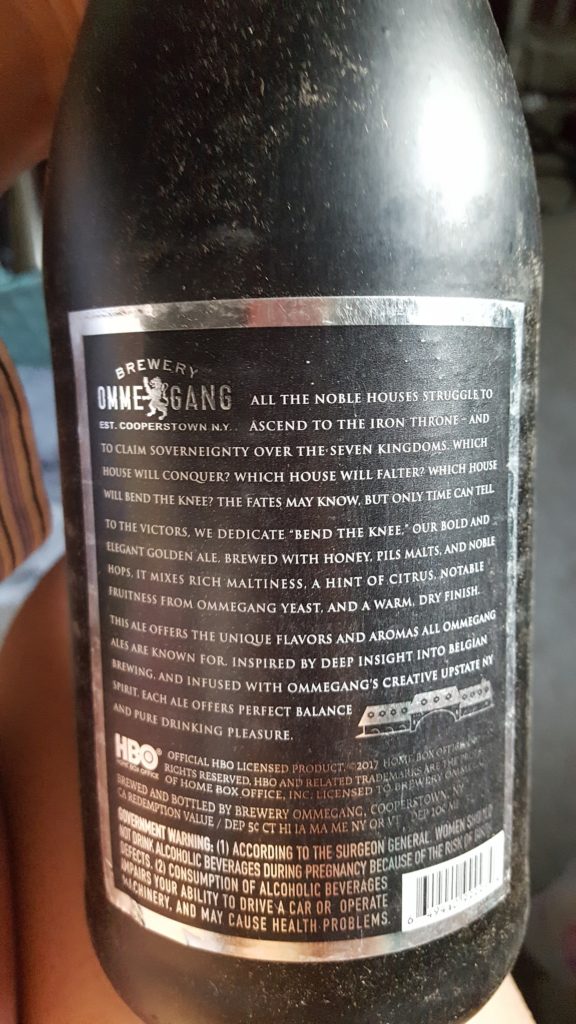 ut we’re in Westeros, right? Bend the Knee is perfect for an afternoon in the Water Gardens, listening to children’s laughter and closing your eyes to the hot sun overhead that stubbornly tries to reach you as you lounge in the cool shade. But unlike the stubborn Dorne in the face of conquering Targaryens in ages gone by, for this latest Ommegang Game of Thrones offering, one should not hesitate to bend the knee.

Maybe I’m biased, but I have yet to drink an Ommegang beer, including ones in the popular Thrones series, that wasn’t a winner. Because of my aversion to IPAs (I didn’t know what to expect with broadly-described “golden ale”), I thought I would need a friend to taste it with me to help with my review (accepting applications for beer friends in DC), but this ale has surprised me. I can say confidently that I do not recall tasting anything quite like it.

I was going to have just a few sips to write this review but it’s fun drinking something from Ommegang that isn’t as bold and Belgian-y as their usual fare (which is delicious). This is a nice departure from what they’ve done in the past. When everything around seems either crafty dark or IPA, it is kind of refreshing and novel to have a cheerful beer as summer approaches. No Night King to see around here! What do you think the Night King’s drink of choice is?

As the bottle steadily emptied itself, Bend the Knee seemed to be a rather forceful name for something so pleasant. I willingly swear my allegiance.

Bend the Knee is available now, in a series of three collectible 750ml corked bottles (SRP $9.99 each), all finished in matte black and adorned with one of the three Great House sigils: Stark, Targaryen, or Lannister.