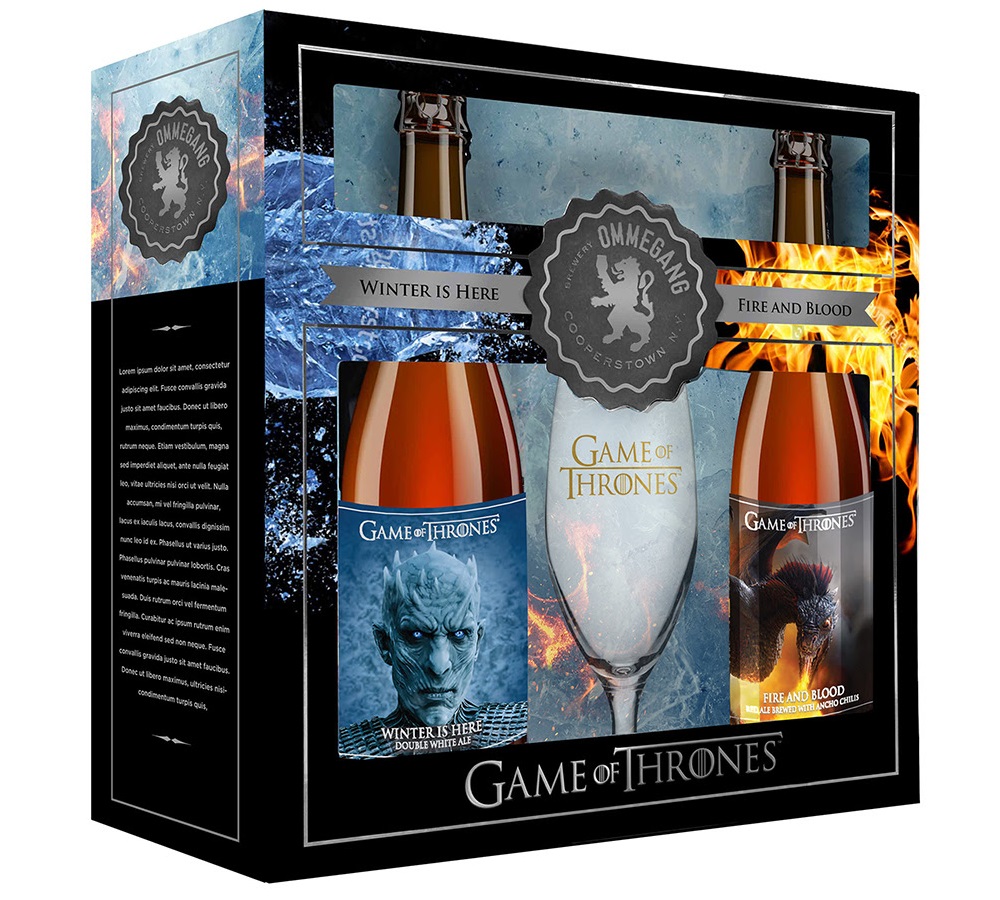 Brewery Ommegang would like to wish you all a happy holidays with a new gift pack to toast the holiday season. This season has two different brews: “Winter is Here” double white ale, which is a new addition, and the previously released “Fire and Blood.” Many thanks to Brewery Ommegang for providing the beers reviewed below!

Like with other Game of Thrones Ommegang packs, there are two 750ml beers in gleaming mahogany-hued bottles with a lovely glass bearing the title of the show in gold. From great scientific research (I’ve drunk a lot of these), the beers always taste better when you use one of the included glasses. Plus they make your Belgian-style beers from idyllic Cooperstown, NY look super fancy.

Starting with “Winter is Here,” the latest beer in the Game of Thrones lineup, the label bears the face of the dreaded Night King who, keeping it real, has sort of a sassy expression. The Night King’s sass may be warranted because as a Brewery Ommegang enthusiast, “Winter is Here” is unlike any Ommegang beer I’ve tried before. My first thought after tasting was “Wow! That’s really different!”

I love comparing Ommegang beers to each other, so “Winter is Here” would be the rowdy cousin to Witte, with a bold, flourishing sip that ends smooth with a hint of sweetness.

As described by Ommegang:

We’ve developed a fortifying double wheat ale with a warming spice, sure to outlast the endless cold. If anything can stand against the Night King, surely it must be beer!

It is forever canon for me that the people of Westeros prevailed against the army of the Night King drunk on Ommegang beer. Make it so, D&D.

More on the beer:

One of Ommegang’s strengths is their ability to infuse their beers with flavors you can taste individually, but which blend together the longer you savor them. This beer has got a KICK, not unlike some of the other ones, but there is spiciness followed by a really surprising smoothness; pepper chased by a whisper of honey. It’s aggressively delicious.

Between the bold flavor and the 8.3% ABV (that’s high, y’all), this is not a chuggable beer so please park yourself somewhere and enjoy sipping it because you’re wasting the flavor (and getting legitimately buzzed) if you guzzle it. Respect the beer!

“Fire and Blood” comes to us again this season, and was the third beer in the Game of Thrones/Ommegang collaboration in 2014.

According to the Brewery:

It’s brewed with pilsner, spelt, rye, and other specialty malts, hopped with Styrian Golding and German Tettnang hops, and spiced with ancho chilies for additional complexity. The hue is deep, dark red with a persistent, creamy, off-white head. The flavor of sweet malt gives way to faint dryness and is balanced by spicy rye and hop flavors with underlying raisin and prune notes. The finish offers balanced malt and spicy characteristics from hop and rye.

It’s an interesting pairing because I had a similar reaction when I first drank “Fire and Blood”: “Wow, this is different from anything I’ve had from Ommegang!” It’s similarly spicy with a swirl of flavors that present separately, then blend into something awesome. This one is 6.8% ABV with cool artwork on the label depicting Drogon. If you had to break up the set, this might be a better beer to gift purely on visual grounds, because dragon > Sass King, infrastructure destroyer and sedate javelin-throwing enthusiast. Taste-wise, if you’re looking to give something lively in an unusual away, part ways with “Winter is Here.”

As the beer correspondent of Watchers on the Wall (Editor’s Note: that’s not a real thing), I rule this a perfect present for beer lovers and Game of Thrones fans you know, and a great White Elephant present if you like your coworkers. Or one could just buy it and drink it by themselves, no judgment here. Plus, at less than $25 suggested retail, it’s inexpensive! Win.

Based on the comments for these, the Game of Thrones Brewery Ommegang beers are a commodity that can be hard to find. Pro-tip: the website has a feature to locate Ommegang near you. Happy hunting, and more importantly, happy drinking!