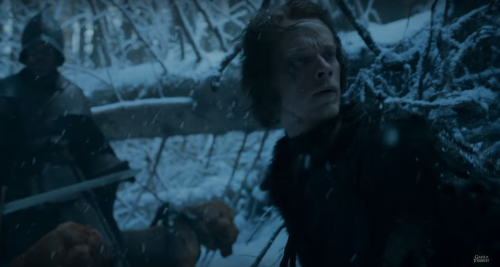 Alfie Allen says that Game of Thrones season 6 is “going to blow people’s minds” and Isaac Hempstead-Wright calls it a “big season.” Casting director, Nina Gold, is to be honored at the BAFTAs and Season 5 is set to rank #1 on the Official Video Chart.

Alfie Allen sat down with Susannah Guthrie of The New Daily. They discussed season 5’s controversies and his mum’s reaction to his torture scenes in season 3. Though he was careful not to give away too much about season 6, Allen promised “more of a Greyjoy presence without the shadow of a doubt … not so much a Theon presence. There may be still be Reek there.”

With lots of deferential glances over at the “HBO snipers,” he mentioned a scene involving Pilou Asbæk that he’s “very much looking forward to” and hinted at a development towards the end of the season comparable to the Red Wedding “in term of epic-ness” that he says “is going to blow people’s minds.”

Allen also participated in a Gameshow of Thrones with Newsweek to test his Greyjoy knowledge … with a cheat sheet.

In an interview for his participation in Run to Ramsgate for Sport Relief, Isaac Hempstead-Wright said that season 6 of Game of Thrones “will be one of the coolest,” that “there’s a lot of things starting to tie up Bran’s storyline … it’s a big season.”

According to Official Charts, Game of Thrones season 5 is set to top the Official Video Chart at #1 and that the show is currently outselling the rest of the Top 10 list combined.

At the British Academy Television Craft Awards in London on April 24, Game of Thrones‘ casting director, Nina Gold, is going to receive a BAFTA Special Award in recognition of “outstanding contribution in casting” for her work in more than 100 film and television productions including Star Wars: Episode VII The Force Awakens and The Theory of Everything as well as Game of Thrones.