New Emilia Clarke and Kit Haringon interviews; Photographers Helen Sloan and Macall Polay discuss the chaos of Game of Thrones | Watchers on the Wall | A Game of Thrones Community for Breaking News, Casting, and Commentary 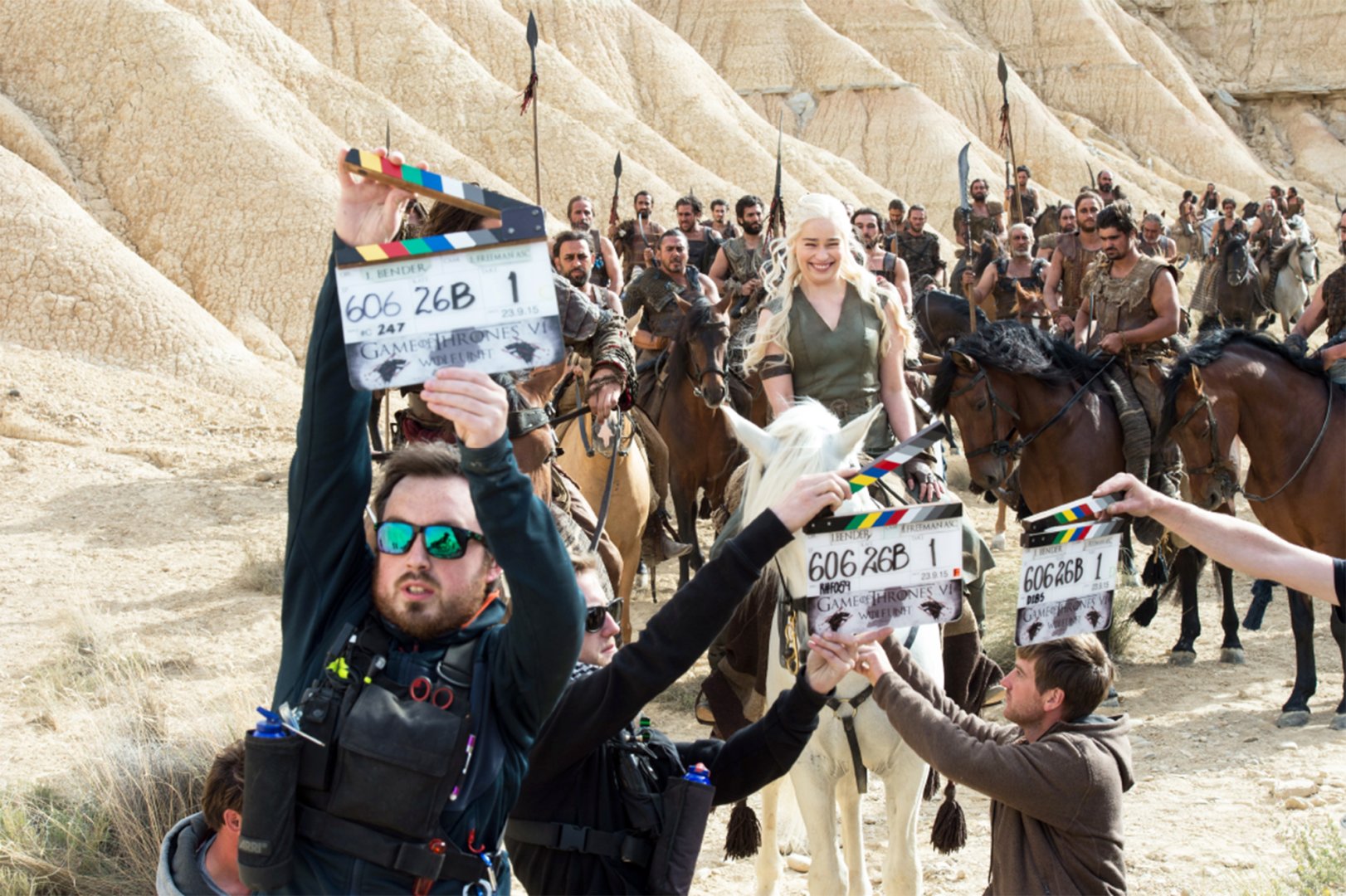 In addition to the Game of Thrones cover story, Time also brings us several interviews today. First up, Emilia Clarke shares how playing Daenerys has changed her, her mixed feelings about onscreen nudity, and her love for her dragons.

When Clarke was offered the role of Daenerys Targaryen, she had recently graduated from drama school and Thrones was her first real job. Consequently, she felt real pressure to perform. “I was just petrified! I genuinely was so scared — I was so fresh out, a year and a bit, so I’d done a couple of little things, but this was the first proper thing that I’d ever done,” Clarke admits. “I was just thinking at any moment they would fire me, and at any moment they’d be like, Just joking, take the wig off.”

Despite her fears, Clarke has made the role her own and has even taken on some of Daenerys’ characteristics herself. “Growing up on the show…there’s a number of times when the parallels between me and her have been sort of astonishing. Ultimately, Daenerys’s main arc is the arc of a girl to a woman. And then to a kind of woman who’s like, Wait a second! OK, I got here, I’m a big girl, but maybe I’m going to be a totally different person!” She continues, “And that’s really exciting because her changes have come at a point where I feel comfortable enough to explore them as a human being.”

Regarding her early nude scenes and subsequent decision to remain clothed on the show, Clarke feels both choices were necessary for the character.  “I’ve said it a thousand times and I’ll say it again: People wouldn’t give two sh-ts about Daenerys if you didn’t see her suffer. We saw her suffer in season 1. Did I suffer a little bit from that? Of course I did, it’s my first job!” As her character has matured, however, Clarke believes the nudity is no longer necessary. “I don’t think that it was an active, ‘I’m never going to take my clothes off choice.’ It’s just a thing where, the roles that came up and the show itself has unfolded in a way where she no longer does that. Where you want to draw parallels as a character, with Daenerys’s strength in keeping her clothes, is kind of obvious.”

Daenerys also finds strength in her dragons. According to Clarke, “There’s something about this maternal connection I had with the dragons from day [one]. I really got into Daenerys’s head, and the dragons are on so many levels the only children she’ll ever know. She has a huge amount of love to give, and all her family’s gone. She’s alone. There is no one character that has ever connected with her in a way that has left her feeling secure.”

For the full interview, head over to Time.

Next up, Kit Harington dishes about the strenuous nature of filming for the sweeping, larger-than-life world of Game of Thrones. “You have to sometimes go into a zone with Thrones where you just shut off everything around you, because everything has to be so detailed. The background has to be in exactly the right place, the smoke has to be the right level, the light has to be right — there’s a hundred things that have to be right. At any one moment, the take could not work, because of any of those elements,” he explains. “It’s exactly like shooting Lord of the Rings. Any big, epic movie would be like that. And it’s a different way of acting where it can get very frustrating, but you have to zone out the background noise a bit.”

Harington experiences more than his share of grueling shoots playing Jon Snow, but he wouldn’t have it any other way. “I think I was picked to be Jon Snow because there’s quite a lot of me in Jon Snow…How [showrunners David Benioff and Dan Weiss] envisioned Jon Snow — they found, hopefully the right person for it.” Harington has tried to live up to their expectations, saying, “How I’ve shaped him over the years, I always felt it was going to be a long journey, it was always going to be eight years in my mind. So you want that character to learn and learn and learn, and then develop.” He continues, “This year there is this huge seismic shift where all of what he’s learned over the years, suddenly… He’s still the same Jon, but he grows up.”

Does Harington have any inkling what’s in store for Jon’s future? “I had certain theories and things up until this last year, so many theories,” he admits. “[For my performance,] I shouldn’t be trying to endgame. He doesn’t know the end, I don’t know the end — he’s living it bit by bit. But I can’t wait to read it. I feel like it’s going to be one of those things where they get us into a room to read them, so there’s no leakage.”

As the show winds to a close, Harington is trying to make his peace with leaving Game of Thrones behind. “I think we’ve all tried to come to terms with that this year. I sound like someone’s dying, but it does feel like someone’s dying. We won’t have time to say goodbye to it, emotionally. For all of us, it’s been an emotional thing in our lives—it’s been all of my twenties.” He isn’t one for long farewells however. “I’m trying to say a quiet goodbye to it this year, so next year I can just do my job and get the f–k out.”

Read the entire interview at Time. 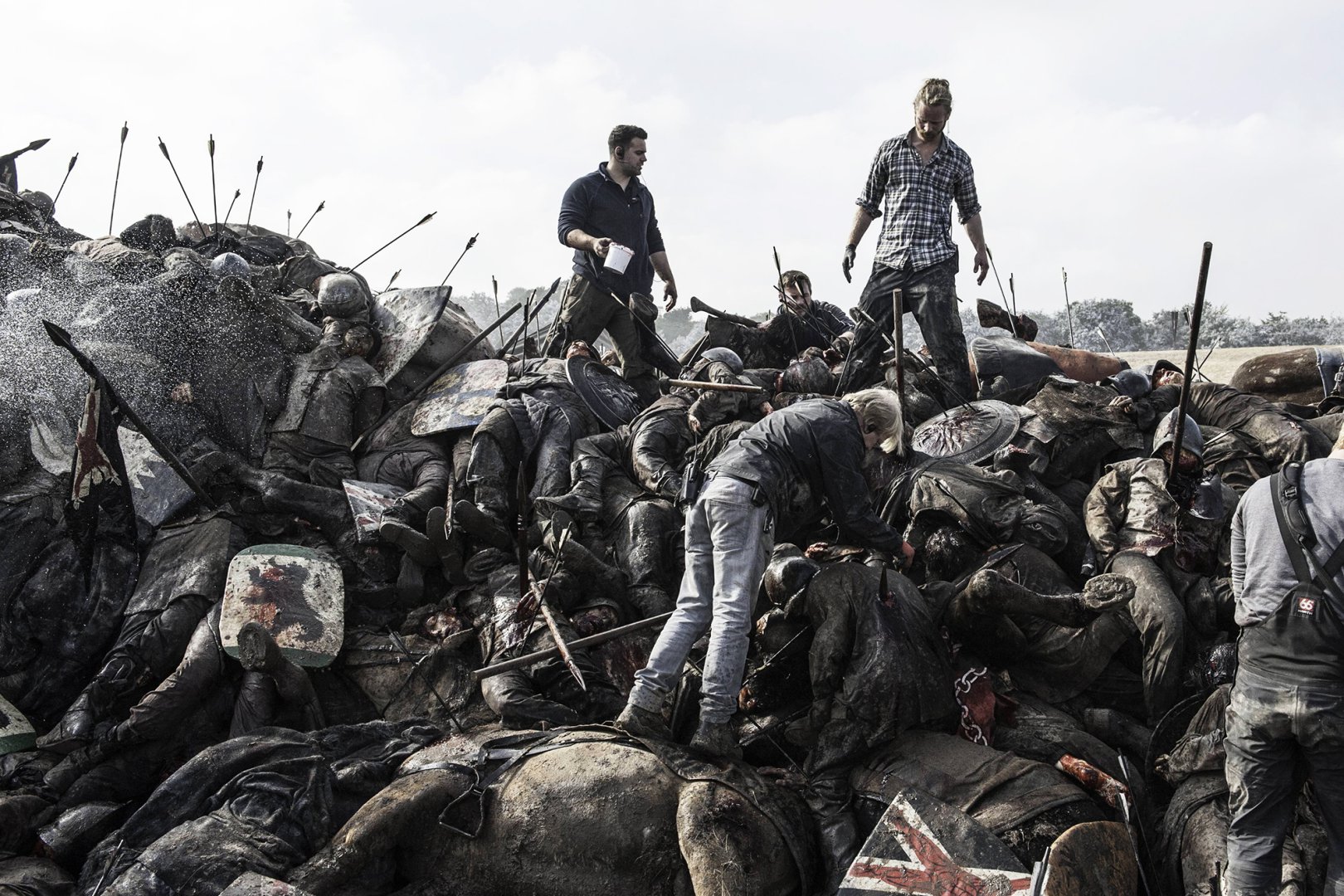 Finally, set photographers Helen Sloan and Macall Polay reveal that actors aren’t the only ones who have rough days on set. It can be difficult to remain unobtrusive during the constant action of Thrones, as they can attest. “You want to be as stealth as possible,” Polay says. “There’s no sort of normal day on Game of Thrones. One day we’re kind of on a nice boat in the middle of a lake and the next day we’re setting fire to Dave the stuntman and chucking him off the side of said boat,” Sloan adds. “You have to just approach each day as it comes.”

Staying focused in the midst of the sprawling sets and multitude of cast and crew is not an easy job. “It’s really hard to explain this kind of bizarre dance to anyone who hasn’t been on a film set and it’s my job to capture this crazy circus,” Sloan admits. “Your senses are bombarded.”

There is definitely one scene that stands out for Sloan in terms of difficulty, however. “I think for me, the most difficult thing to shoot and to deal with of the seven seasons has been the Battle of the Bastards,” she says. “It was just chaos. I’m standing there and there’s 360 degrees of cool stuff to take photos of. You’re constantly going, ‘I’m not getting everything, I’m not covering it.’ There’s just so much going on.”

The show coming to a close weighs on Sloan’s mind as well. “I think it’s going to be really hard when it’s all over, I think that’s when it’s going to be hard to adjust back to normal life. It’ll be like that romance that you just never get over.”

Check out the rest at Time.