Cast members confirmed and exciting new views in Osuna | Watchers on the Wall | A Game of Thrones Community for Breaking News, Casting, and Commentary

News from Osuna and the Meereense plot continues to trickle in.  WotW sources have confirmed a couple of new cast members.

First there is the announcer for Daznak’s Pit.  This is the role we announced back in early October and will be played by Nicholas Boulton (lead photo above).

The second confirmed casting is for a new, non-book character named “Keyr”, who will be played by Reece Noi.  You may remember him as the unnamed slave who argued for rebellion during the Season 4 episode, “Oathkeeper“. 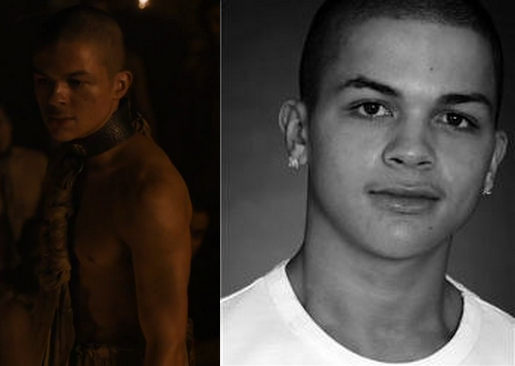 The actor himself confirmed it as well.

12 flights, 4 countries, 3months, 2 languages. Laughter all day every day. Thank You GoT5 X

In addition, thanks to commenter Cami and Gameofthronesfan.org we have some interesting photos and video clip from Osuna below the cut.

From Cami and Gameofthronesfan.org we have some photos and a video clip from Osuna and Daznak’s Pit.   These are not necessarily news to us book-readers who have been following the shooting for the Pit scene closely.  They are, however, good detailed views providing more grist for the speculation mill.  The most exciting item has to be this clip of a flame thrower being used most effectively.

We see Jorah, Daario and Missandei with Dany and a variety of people in what appears to be various poses of distress in the stands behind them.

Next we see Dany on the run and Jorah trying to restrain or drag her away.

Talk about whetting our appetite!