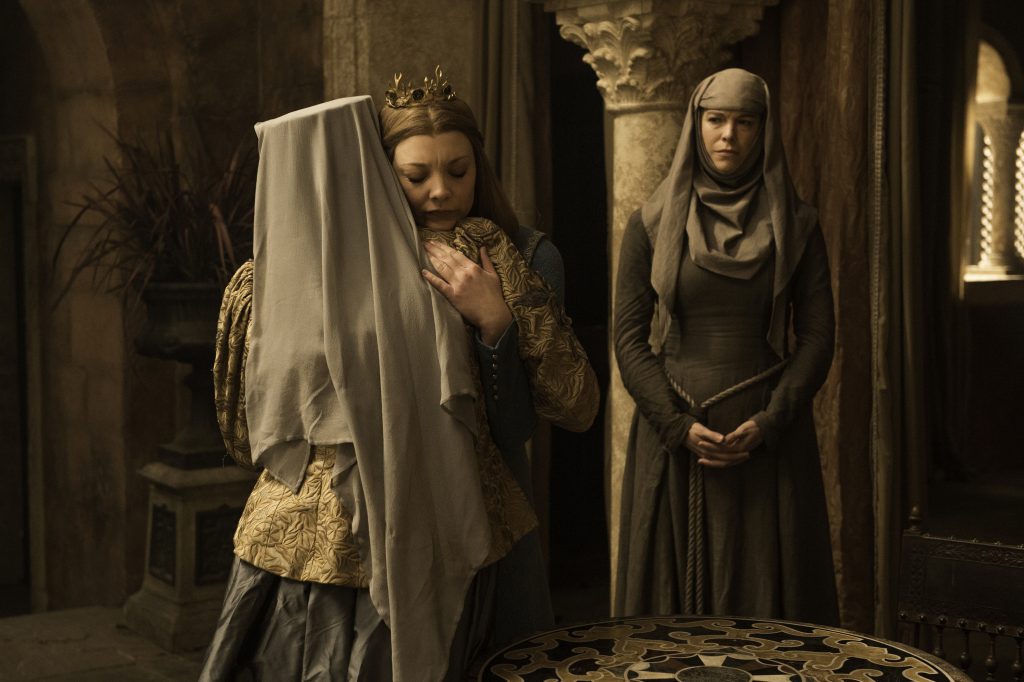 The late Queen Margaery, Natalie Dormer, has a new interview over at MakingGameofThrones that is a worthwhile read, and we’ve snagged a few of the highlights for your enjoyment here. The actress discusses her final season on the show, and the finale in which we saw Margaery realize fatally too late that she’d been outplayed by Cersei.

“They gave her the privileged position of being the only person to realize what’s happening, a moment of vindication that just summed up her personality. She was always a couple of steps ahead of everyone else, even to her last moment. I’m very grateful, because Margaery Tyrell was never a victim – even in her last moment they allowed her to not be,” Dormer tells MGoT, and adds, “It’s also very poignant that she’s standing there holding Loras, because her love and her closeness with her sibling has always been in the background. For Finn [Jones, who plays Loras] and I to go out together, literally holding on to each other, was a beautiful moment.”

The interview delves Margaery’s line to Tommen, “I’ve had lots of time to think about how good I was at seeming good?” Was Margaery being genuine in any way when she spoke the line or was it just another ploy? Dormer acknowledges the truth buried in her character’s deception.

“I think she’s articulating out loud something she’s always known about herself,” she says. “If any of us were forced to sit in a dark cell on our own, we would do some soul searching. But I’ve always held firm that Margaery’s heart is true – I don’t think she has a dark spirit. She’s giving a narrative to Tommen that helps convert him at that moment. Maybe she was able to mix a bit of the truth in there – that’s the most effective kind of lying isn’t it?”

Her final moments on set were not in the fiery blast at the sept but while filming a much less violent, though still tense, scene. The actress says, “My actual last day was with Diana Rigg [Olenna], where I hand her the bit of paper with the rose drawing. It was very fitting: the actor hugging the actor goodbye, and the character hugging the character. Dan and David were both there in order to give me the proper send-off. It was an emotional day.”

She didn’t leave empty-handed though. “They gave me Margaery’s wedding crown, with the roses interwoven around the Baratheon antlers which sits on my bookshelf and will be loved from now until the rest of my days.” A very nice parting gift, indeed!