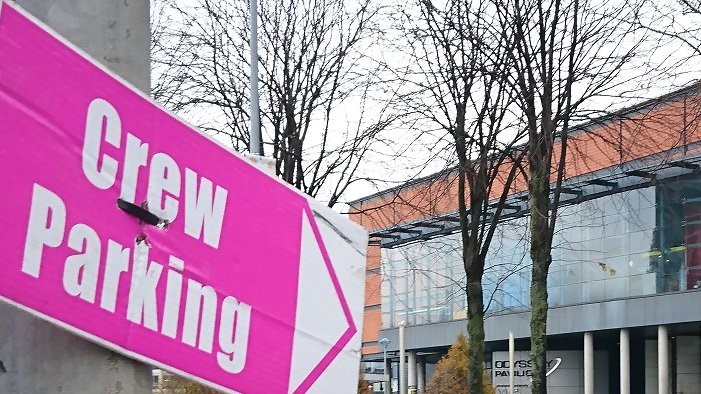 The crew is parking near the studios, which can’t hold everyone anymore! | Photo: Irish Thrones

A week into filming season eight, the Game of Thrones cast continues popping up in Belfast, where, incidentally, the mysterious new set being built on the parking lot of Titanic Studios has seen a spike in activity — they are going all in with this one.

Despite the many cast sightings, it appears they are sticking pretty close to the new rule we’ve been hearing about lately: “No selfies allowed.” Still, according to reports, throughout the week a number of Game of Thrones stars have been in Belfast, namely Kit Harington, Sophie Turner, Maisie Williams, John Bradley, and Emilia Clarke

Can’t believe i met Sam Tarly and the main guy behind Game of Thrones in some bar in belfast last night!

Flight to Belfast last night included stars from Game of Thrones. Flight home we’ve got Gove. I can never unsee the contents of his wash bag

We also lack photos of the set developments, but reports show production is ramping up at Linen Mill, where a number of sets are held (the ships; Riverrun, which turned into Casterly Rock; Volantis, formerly Harrenhal; and more), and at the massive set in construction next to Titanic Studios. Here it all is, courtesy of Irish Thrones:

#GameOfThrones Pink signs now up & pointing at Linenmill studios at Corbet, near Banbridge in Ireland. Sets of Riverrun courtyard & more!

The new large set @ Titanic Exhibition ctr, Belfast, production staff moving back & forth between it & the Titanic Studios #GameOfThrones HQ

Hopefully we’ll have more photos of the new set soon. Despite its public location, the crew may do a better job at hiding it once filming begins within, so there’s a relatively short window of opportunity in which the set will be done but filming won’t have started there yet, and so we may learn what this castle-sized set is supposed to depict at last.