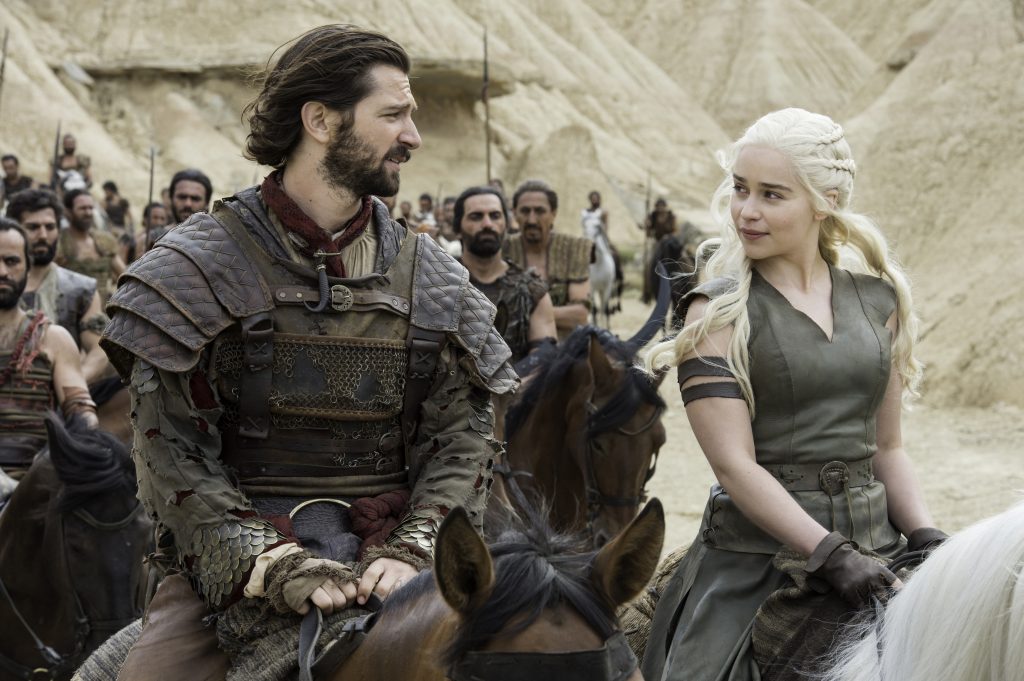 With the opening of Game of Thrones‘ Hall of Faces at SDCC, fans were treated to the presence of cast members such as Liam Cunningham and Kristian Nairn, and joined by GoT’s Emmy-award-winning costume designer Michele Clapton. Clapton is back on board full-time with Game of Thrones for season 7 after taking a partial step back during season 6 (April Ferry took on costume design duties for the first three-quarters of the season). Today, the designer speaks with Hypable at the Hall of Faces about her work on season 6, and teases what’s to come next year.

In particular, Clapton discusses Daenerys’s clothing and jewelry choices, which have shifted throughout the series, reflecting her development. Come the end of season 6, Daenerys has moved from blue and white gowns to deep gray.

“It’s not quite black,” Clapton tells Hypable’s Michal Schick. “It’s just sort of going that [Targaryen] direction a little bit. I just want this sort of strength…and I wanted the embroidery on her to become more metallic and stronger.”

She adds, “It’ll be interesting to see the direction she goes in next season.”

As for next season, she tells Hypable, “I’ve just started prepping on 7. We always do it the same, we read the storylines and we design accordingly, so everything should make sense to where they’re going. And sometimes it foretells things.”

Clapton says that Dany’s hand-wrap will likely be seen in season seven as well. “I quite like jewelry that isn’t just too traditional. I like to take it further,” she says. “I was looking at this wonderful cage that can sit on shoulders, and I was thinking I’ve got to do — I’ve got someone in mind, but I’m not sure if I’m going to do it or not… I’m going to see if I can work out a way to do this for this one character, but I can’t say!”

Hypable delves in the Hall of Faces costume display and discusses Clapton’s Game of Thrones MEY jewelry line, so check out the complete article at the source!