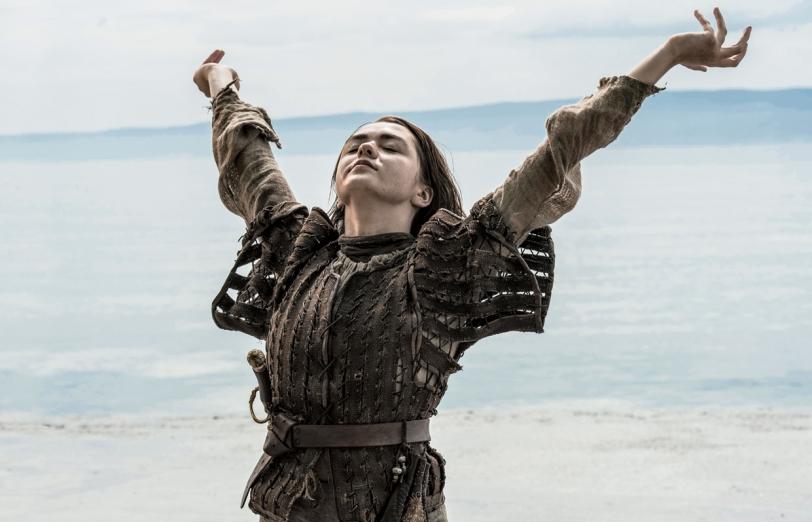 In a new interview, Maisie Williams gives unexpected insight into the final season… in a way. She divulges no spoilers, but she does discuss how the ever-growing importance of female characters will continue in the final season. We are also told what Maisie does to prepare when she adorns the mantle of Game of Thrones‘s resident “serial killer everyone’s rooting for” (her words), among other interesting soundbites. We’ll take it!

Maisie tells Elle that season seven was a turning point for Arya, because prior to it, we had largely seen her killing an assortment of bad eggs, including pedophiles (Meryn Trant), traitors (Walder Frey), and fellow psychopaths (The Waif), among many others:

“Arya was always killing the baddies, Williams notes. “But then we saw her start to use those manipulative powers. It’s not until she had that whole dialogue with her sister Sansa in the last season that you realise what she’s become, that she’s being awful to someone who we love. For me, it was a really great moment as an actor to be able to play the character you love as a baddie.”

Maisie goes on to discuss her friendship with fellow Stark sister, Sophie Turner:

“Also Sophie is my best friend. Who gets to be on set with their best friend? Me!”

As a guy who acted in high school alongside his best friend throughout many a stage production, I can attest that it’s pretty damn cool. Their real life bond has gone so far that the sisters will pair up when Maisie joins Sophie’s side at Sophie’s wedding. As fans, we are incredibly happy for them. As devout fans, we hope their wedding is neither red, nor purple, nor any other color. But I digress…

How does Maisie get into Arya’s head? It’s not always so easy, she says, as she uses a technique known as ’emotional memory’: “I find it very helpful, but it’s horrible. You have to draw on things from your own life. So sometimes, to get inside Arya’s head, I’m thinking about some awful things. It’s hard to just drop that and let it go.”

Additionally, Maisie acknowledges the show has grown with the changing tide of awareness: “For me, [Game of Thrones] is a medieval world in which women don’t have a lot of rights, and yet they still prevail. But I do think that as the seasons have gone on, it’s become more and more amazing for women.”

The ‘sexposition’ of seasons’ past has been nowhere near as prevalent in seasons 6 and 7. Then again, we recall a casting notice for season 8, reading ‘actress, aged 18-25, will have to go naked above-the-waist.’ So hey, ‘tits and dragons,’ I guess?  In all seriousness, Maisie is not wrong. The women’s power dynamics shifted drastically over the last few seasons, particularly when season 6 ended with Cersei atop the throne, Yara making a pact with Daenerys, who finally set sail for Westeros, and Sophie emerging as Lady Stark of Winterfell. While season 7 certainly furthered these plots for better or worse for the women involved, the power moves women have made as the show has gone on have increased dramatically, and this is an excellent direction, I’d say. So would Maisie, as she teases this trend will continue in season eight:

“[T]his final season is going to be incredible. It just feels great, being on set with all these girls. They’re all ruling, you know, they’re all back on top – it’s pretty impressive.”

So, will Arya Stark make it to the finale alive and well? The closest thing we get to a spoiler is Maisie’s personal desire: “Season one to eight, that’s what I wanted. I was in the first episode and I want to be in the last.” Note how she ‘wants’ to and does not confirm that she is. If I’m hedging my bets, however, I think Arya is one of the most assured characters to survive the entire show. Whether it’s a happy ending for her, or a sad and lonely one, I think there will be an ending involving life. If it’s a happy ending though, perhaps I haven’t been paying attention.

Check out the full interview for more on Maisie’s perceived parallels between herself and Arya, as well as on her relationship with her boyfriend and family.