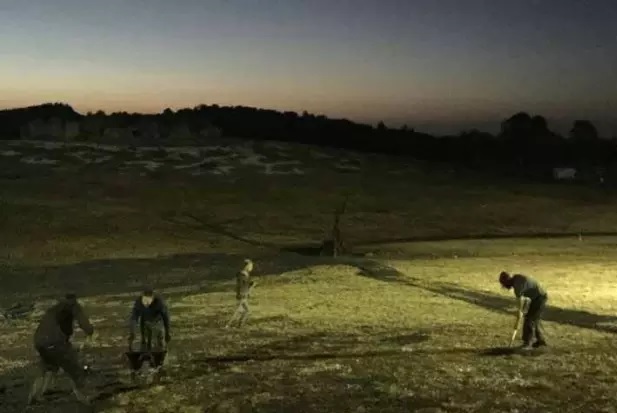 Offering a look inside the Game of Thrones art department, The Banbridge Leader has interviewed Greensman Garth Hill, who talks iconic sets, season seven and how it feels going to work every day with the White Walkers.

Garth Hill has been a member of the Thrones team for the past six years, initially coming to work as an outside contractor for Head Greensman Michael Gibson. He now works for Fire and Blood Productions, with an Emmy certificate hanging on his wall besides.  But what exactly is it that a Greensman does? Garth explains:

I suppose it would be building and dressing sets, using natural and artificial materials.  For the indoor sets it’s mainly artificial because the lights would kill the living plants, and we do a lot of ground cover.

As a local man (Garth hails from Holywood) he has been involved in several of the Northern Ireland location shoots, such as the Kingsroad and the first scene he was ever in charge of, the Iron Islands at Ballintoy Harbour.

I hadn’t a clue.  I’d never done anything like that before and it was handed to me to do…We had to hide a lot of concrete, and green out the houses and cottages and lighting cables.  We knew a farmer up there and he gave us his field (so we) stripped his field and transported that down to the harbour in tractor loads.

Garth goes on to talk about some of his biggest jobs for the series, including Hardhome, the Godswood tree and the Battle of the Bastards:

We were just given a huge field, and we had to make it look like a dead, sparse place. They wanted it white and grey, as if there was no life about.  We knew there was going to be trouble with drainage and with all the horses and action, it was going to be a quagmire. So we put about 400 ton of stone into that field…we covered the field with a thing called haylage, then we dug up a field of reeds, I think it would have been about 1000 reeds, just to get textures, so it didn’t just look like a flat field.  Everyone pulled together on that one because it was such a big production, with 500 extras and 80 horses.

Whilst we won’t see the fruits of his most recent labours for another year or so, Garth assures readers that his work on season seven is well under way and that he can already tell it’s going to be great. However, going to work every day on a fantasy series such as Thrones can be a little weird, with Garth noting:

You’re in the Paint Hall and you see a giant just walking over to get a cup of coffee, or Daenerys dandering about, or the Lannister Guards, all sitting around chatting. The White Walkers are incredible when you see them. The prosthetics are incredible. Most of that is real, it’s not visual effects what you see with them.

Finally, Garth discussed his most poignant scene so far:

I was very involved with the making of the Hodor scenes last series.  That was between special effects and us on the door. They’d made three or four doors, one main wooden heavy one and then they had the fake ones, and we had to dress that door inside and out with roots, and of course they had to retake that scene several times so when they put the next door on to shoot again, they all had to match the exact same. “It was quite an intense wee scene with the amount of work that went into it. It was a big iconic scene; it was sad. A lot of time went into that scene.

You can read the entire interview on the Banbridge Leader site.