Location filming begins with Trystane and Myrcella, despite the rain in Spain | Watchers on the Wall | A Game of Thrones Community for Breaking News, Casting, and Commentary

Spain was chosen to stand in for the warm desert-like region of Dorne, but you wouldn’t know it from the rain in the country today. However that didn’t stop Game of Thrones from shooting, despite some questions as to whether cameras would roll once the poor weather forecast became known.

According to ElCorreo, the show started shooting at 6 in the morning. Extras were present, taking on the roles of soldiers and servants, many people clad in Martell orange.

ElCorreo even managed to catch a glimpse of Nell Tiger Free and Toby Sebastian: 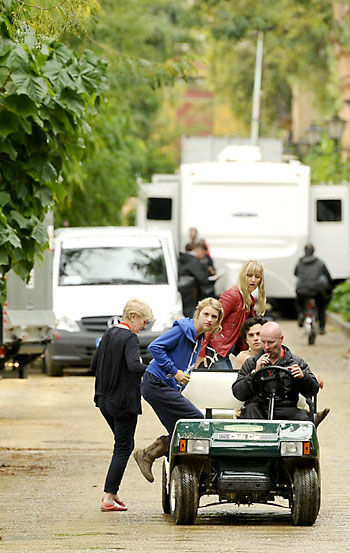 Free took the time to meet and pose with a few lucky fans of the show near the Alcazar:

NOTE: This next piece of information contains SPOILERS!

In other filming news:

This Croatian TV report holds an interesting bit of info. Around the 1:44 mark, Conleth Hill in Varys costume is spotted at the Villa Sheherezade, around the distinctive gate. Crews were seen in the area of the villa in early October. Boxes were seen outside the villa marked “Illyrio’s,” hinting that the show is headed back to Pentos to see Magister Illyrio Mopatis.