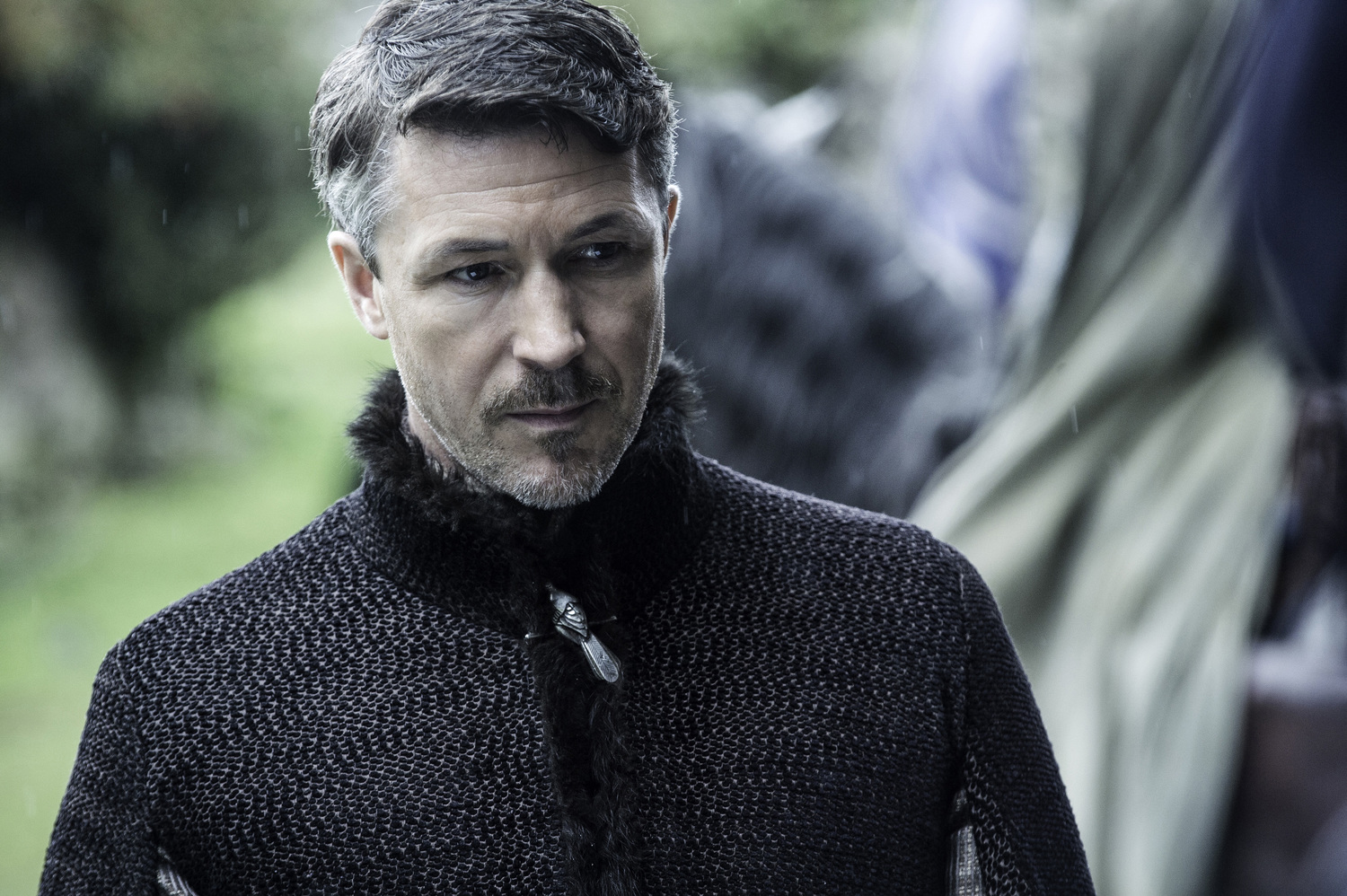 I did warn you not to trust me

These words from Petyr “Littlefinger” Baelish, uttered ironically in Season One of Game of Thrones, came back to haunt him in the Season Seven finale, as Three-Eyed Raven Bran Stark pulled Baelish’s statement out of some mystical archive to use as evidence in a surprise trial. Littlefinger failed to achieve his desired destiny of being on the Iron Throne with Sansa Stark by his side; he instead met a more grisly fate delivered by the blade of Faceless Man Arya Stark.

Littlefinger’s rise to power and influence, through treachery and double-dealing, appeared to be the winning Game of Thrones philosophy over the honorable ethos shown by Lord Eddard Stark, with Ned’s honesty and plain-dealing being seen as a disadvantage in comparison. Baelish’s comment on trust is entirely about Ned Stark’s lack-of-success in King’s Landing. Trust no one, would be Littlefinger’s advice. But now Lord Baelish has been taken out of the game as well.

So is Littlefinger’s fall a repudiation of his treacherous ways? Well, not just by itself.

There’s a certain satisfaction in honorable aw-shucks Ned Stark’s daughters taking revenge for their father’s death, with Sansa being the one to pass the sentence and Arya being the one to swing the steel. But I don’t know if his demise necessarily invalidates Littlefinger’s methodology. Sometimes one plays the Game of Thrones and still loses, regardless of how skillful a player they might be.

After all, Margaery Tyrell was considered a savvy political operative, and although she survived her time in the capital longer than Ned did, she ended up just as dead – by making the same mistakes Lord Eddard had made:

It might not be that Littlefinger played the game badly, it might just have been that his number was up. We’ll come back to the topic of his gaming proficiency near the end of this… 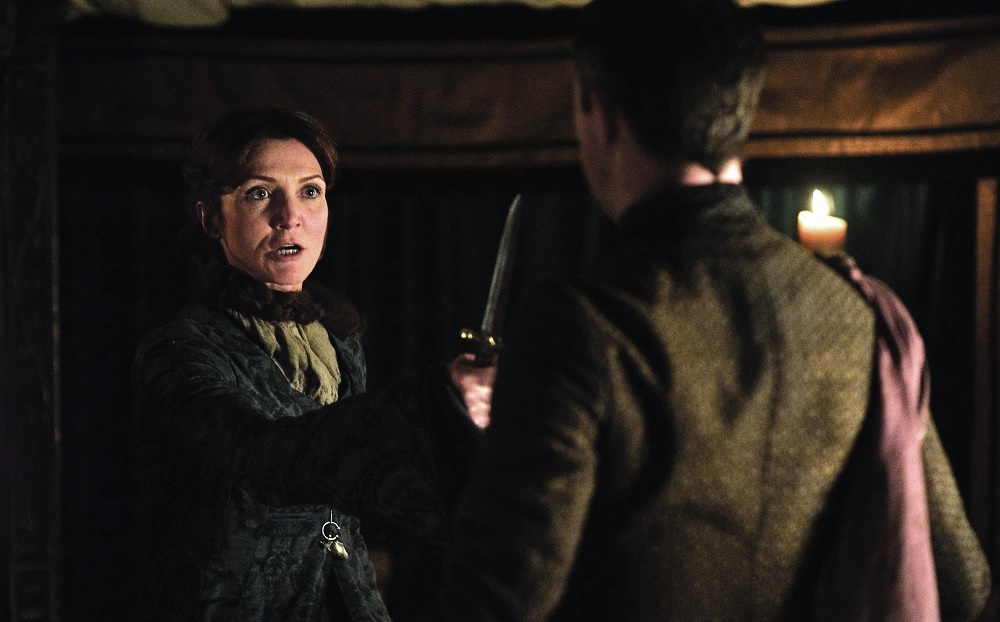 To return to the first question I posed: is the justice meted out by honorable Ned Stark’s daughters a repudiation of treachery and a validation of honor? I somewhat think it is, but not only because of Ned Stark.

Let’s not forget that Arya and Sansa are also Catelyn Stark’s daughters.

Catelyn often gets brought up in the context of Littlefinger’s storyline. The core of his shady backstory starts with him ill-advisedly challenging Brandon “I Kill Things It’s What I Do” Stark to a duel, with unmarried Catelyn Tully’s hand as the prize. (Her hand and the rest of her.)

Baelish seemed ever-ready to talk wistfully of his love for Catelyn at the drop of a hat. You know, to random whores who were auditioning for work, to Lysa Arryn right before he pushed her out the Moon Door, to nearly everyone with some relation to Catelyn.

Baelish: You know, I loved your mother…
Sansa: Uh, cool?

Baelish: Did you know that I loved your estranged and forbidding step-mother? Or did you know nothing about this?
Jon Snow: That is literally the last thing I’ve ever wanted to know about.

I’m sort of surprised a scene like this didn’t happen at Harrenhal when Littlefinger was visiting Lord Tywin in Season Two:

Baelish: I say, little plucky serving girl, did you know that I once loved Lady Catelyn Stark? It’s true. We always had a certain undeniable chemistry. A certain Je ne sais quoi. That’s High Valyrian for “she could get it.”
Arya: JAQEN! I have my third name for you!
Jaqen: A man is in the privy! Bother a man with names later! 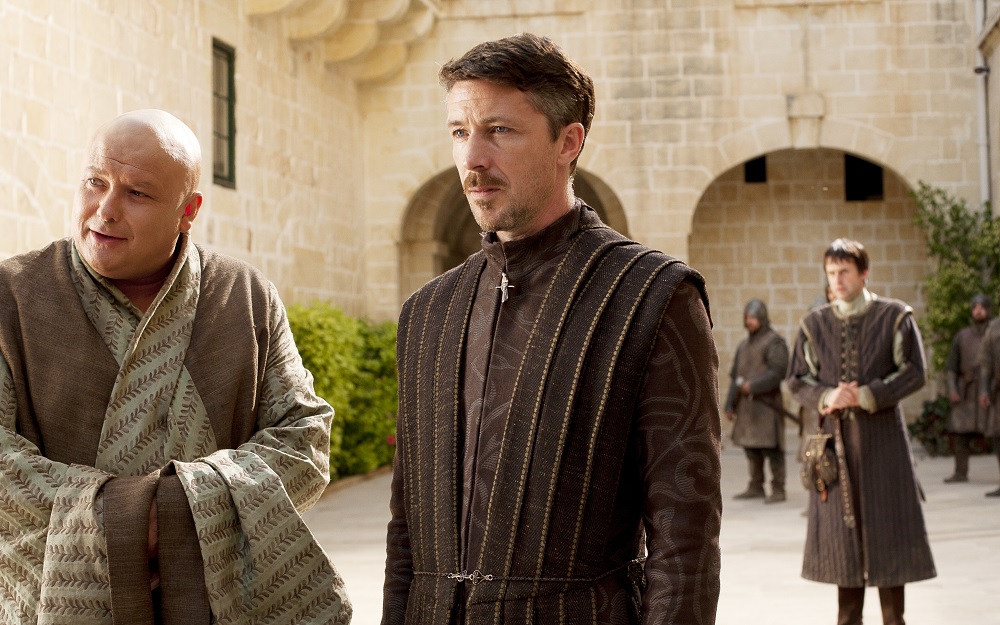 Littlefinger did set Ned up for a coup-de-main after Robert’s death, when Ned planned to enforce Robert’s last wishes for a Stark regency until Robert’s heir could come of age and be crowned. Which would have gone something like this…

Joffrey: Why do I have to wait any amount of time to be king?
Ned: Just relax…
Stannis: I’m here. You, septon. Tell me I’m king.
Septon: You’re king?
Stannis: That’s that. I do like an efficient coronation We’re done here, vassals, go get busy vassaling.
Ned: Thank the Old Gods! I’m heading back North.
Stannis: Whatever. I have some housecleaning to do.

… but the larger betrayal was Littlefinger’s bold lies to Catelyn about the backstory of the Valyrian steel dagger used by the bargain-basement assassin who tried to kill Bran Stark, catching Tyrion Lannister in the web of false statements. Catelyn trusted Baelish because of their childhood together; she considered Lord Petyr almost like a little brother, and we know family is important to the Tullys.

Catelyn: Pete, you’ll take care of Ned, won’t you?
Baelish: Oh, I’ll take good care of him. You can trust me on that.

Because of his falsehoods (and using Catelyn’s sister to murder Hand of the King Jon Arryn and unjustly blame the innocent Lannisters) Catelyn was primed, armed, and fired by Baelish like a weapon to provide a reason for Tywin Lannister’s rampage through the Riverlands and the near-destruction of House Tully.

But these aren’t the aspects of Catelyn that I want to focus on. I don’t want to dwell on her as the object of any skeevy guy’s affections, or the victim of his puppetmaster machinations.

I want to talk about Catelyn taking a direct action that led to Baelish’s downfall, an action that wasn’t in the Littlefinger Chaos-is-a-Ladder rulebook. An action that Baelish would have dismissed and mocked.

I’m talking about Catelyn putting her trust and faith in someone. Someone not necessarily known for his honor and fidelity. 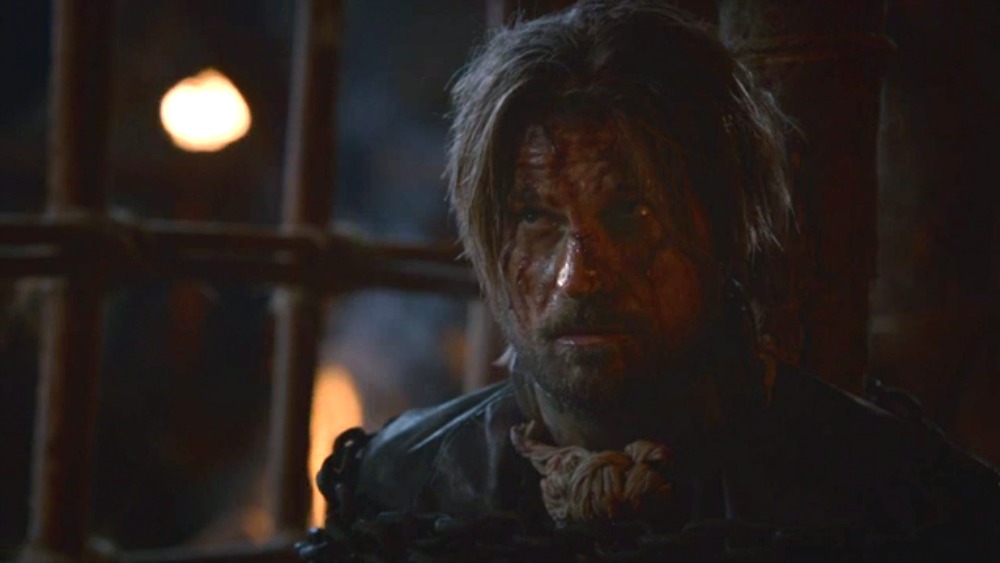 Despite his reputation, Catelyn saw fit to place her trust in Ser Jaime Lannister, the Kingslayer. She charged him to honor her releasing him as a fair hostage exchange for Sansa and Arya (both were believed to be held at King’s Landing.)

And Jaime did. (It was touch and go a bit there, but he did.)

Catelyn did not live to see this happen, she died at the Red Wedding long before there were any positive outcomes from the release of the Kingslayer to free the girls. But Jaime followed through as best as he could.

Arya’s fate was unknown, and with Sansa a fugitive from King’s Landing after the death of his son Joffrey, Jaime authorized Brienne of Tarth to seek out, serve, and protect the Stark girls. He granted the maid of Tarth armor, resources, Podrick Payne, and a priceless Valyrian steel sword, forged from Ned Stark’s greatsword Ice.

Brienne sought the girls in the Riverlands, tracking Sansa north into Winterfell and rescuing her from Flayed Man search parties after Sansa and Theon Greyjoy’s escape from Bolton captivity. Free from the Boltons, who were now robbed of their political advantage over the North, Sansa was free to assist Jon Snow in rousing what loyal support he could. She even brought Littlefinger in with a force of knights from the Vale.

Sansa: Please come with a bunch of guys. You’ll get a reward.
Baelish: Will I? Nice.
Sansa: Yup. You’ll get what’s coming to you.

Brienne directly assisted Sansa, allowing her to venture on a path that led her to the Great Hall, sitting in judgment on Baelish. I think that’s reasonably clear. But can the same be said about Arya, Catelyn’s other daughter?

Sort of. In a different way. 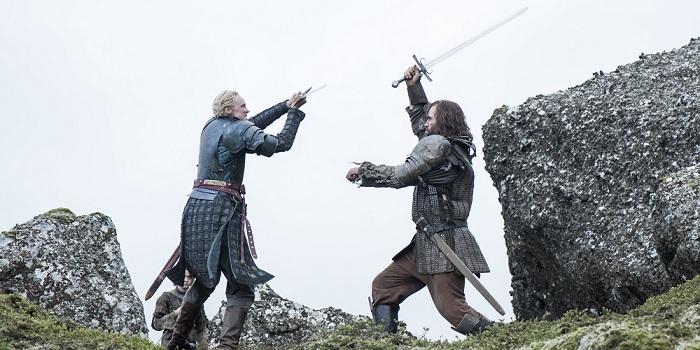 Brienne tried to serve Arya, running across her and the Hound in the Riverlands. Due to a reasonable distrust of motives (Brienne and all that Lannister-financed gear) Brienne and the Hound fought an epic battle, allowing Arya to escape from Brienne, but also from the Hound. From there, Arya traveled to Braavos and obtained some skills from the Faceless Men assassins. Skills which obviously including a proficiency for killing.

So what benefit did Brienne bring for Arya? In essence, she allowed Arya to have her own agency and follow her own course. Had Brienne not debilitated the Hound, Arya might not have left his side so easily. (Book readers, no need to correct me on this, I’m working from the show here.)

Growing up, Sansa was the one Catelyn had the most influence on – Arya was quite the wild child. So it seems appropriate the Catelyn’s gift from beyond the grave to her girls, the service of Brienne, followed suit. Brienne was the loyal and valiant knight that the lady Sansa needed. Arya had no such use for a knight in shining armor, but she did need to go her own way. Brienne’s intervention took care of that.

The gift of Brienne was made manifest by the release of Jaime Lannister. Whom Cat trusted to do the honorable thing.

So, I prefer to think that it wasn’t so much the spirit of Ned Stark in the Hall, guiding the events and bringing a dishonorable traitor to his end, but the ghost of Catelyn Stark, both Lady and hard-hearted Avenger, dispatching an enemy who’d lived in opposition to the House Tully words of “Family, Duty, Honor.”

Family, duty, and honor are the kinds of things that live on, that are hard to overcome in the long term. The North remembers, it doesn’t forget. 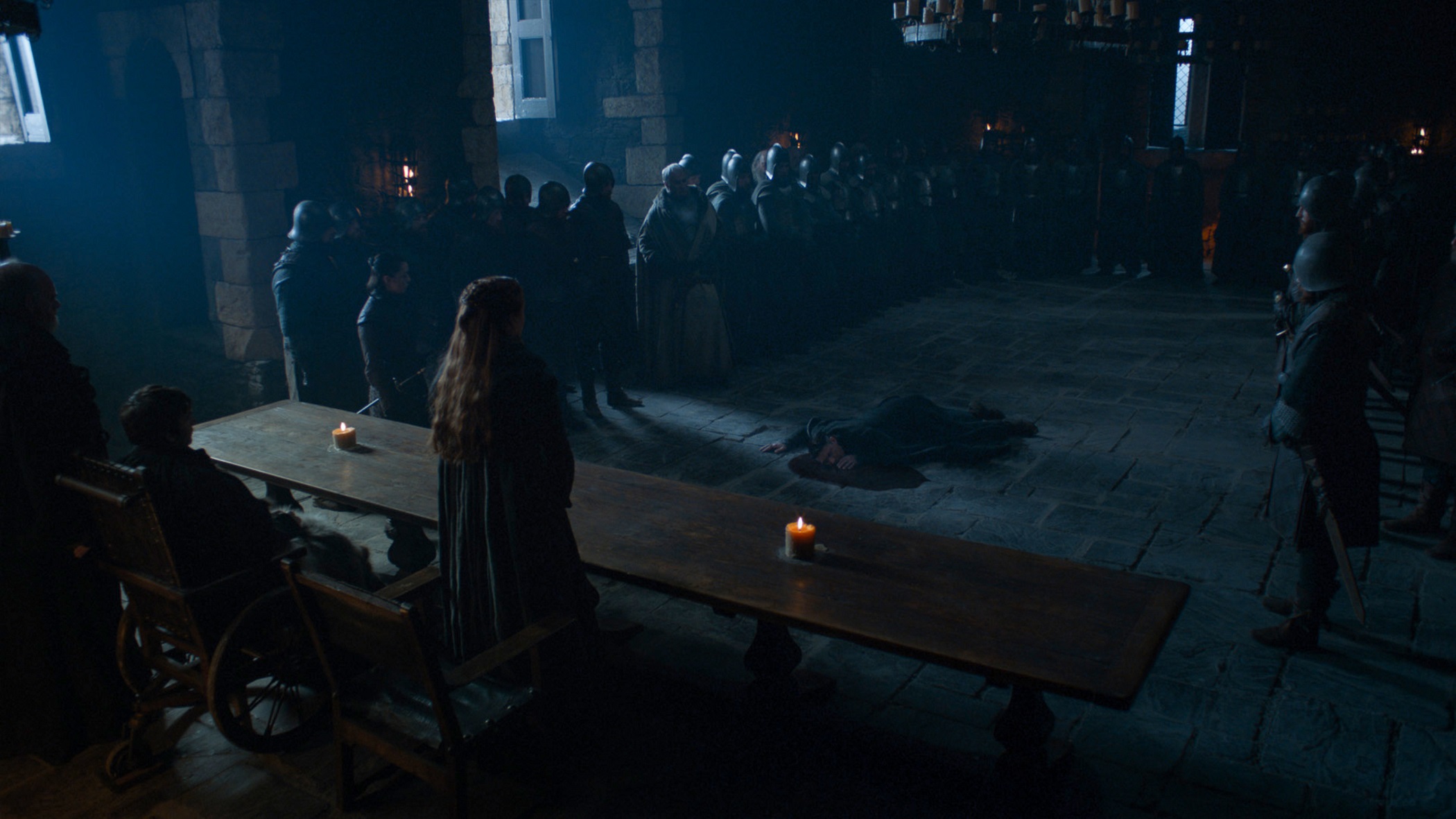 Baelish had played a good game, it’s quite possible that he could have engineered an escape earlier had he not been so focused on the vision of having Sansa Stark be the companion to his grand ambitions. He’d made a similar error in challenging the elder Brandon Stark for Catelyn.

Bran Stark: I feel like I’m not getting any credit here. I did bring up the whole “I did warn you not to trust me” line at the trial. Boom.
Me: Okay, fine. This was the second time a Bran Stark punked Petyr Baelish. Are you happy now?
Bran: Happiness is overrated. I feel a combination of enlightenment and –
Me: Dude, please stop talking.

So, I hope in whatever cosmology holds legitimate sway in Westeros, that Catelyn Stark is pleased that her faith in Jaime Lannister paid off.

Jaime Lannister: I hope I get a warm reception at Winterfell. These winter roads are freezing! (And I hope Bran doesn’t remember me tossing him out a window.)
Bran: I remember everything. You can trust me on this.