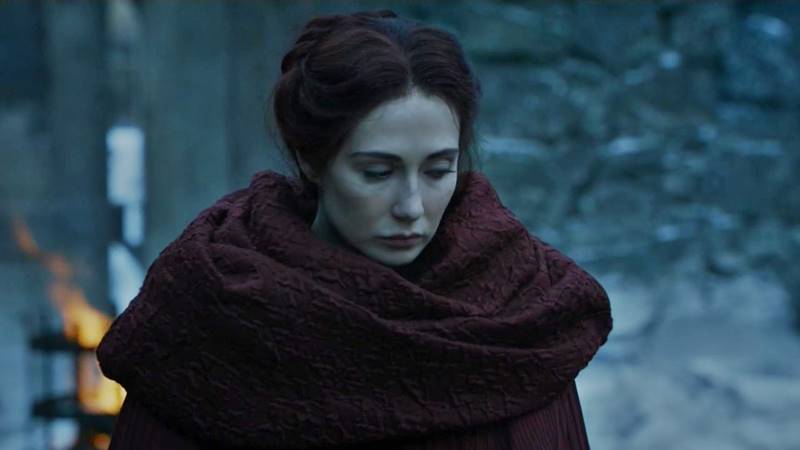 Cunningham and van Houten spoke to Express.co.uk about how the events at the end of season 5 will impact their characters going forward.

Van Houten described Melisandre as a woman whose “whole world is shaken” and who is “completely confused” at the beginning of season 6.

“What the f*** is happening? She’s been on this mission and all of a sudden it makes no sense and her tricks didn’t work – the sacrifice of this girl didn’t work,” she said. “But I think it’s slowly getting to her that she might have been slightly wrong about things, so that’s where we leave her in season five and that’s definitely where she starts off in season six.”

Cunningham concurred that Melisandre’s faith is “shaken” at the beginning of next season and said that Davos and Melisandre find themselves in a similar situation. “It’s a little odd, you do find yourself in no man’s land. You have to remember that myself and [Melisandre], the reason for being in the show, which is Stannis, has been taken away from us. So what our trajectory was, it’s gone that way.”

However, he teased an amazing journey in store for the characters. “The first episode to kick off with [Mesliandre] – without saying anything again – is astonishing. There’s absolutely amazing stuff coming [up], just so left of field, unexpected and just watching your and my favorite characters being put in these situations that are just so unpredictable and just so unexpected and it’s one of the trademarks of the show.”

In an interview with Radio Times, Kit Harington admitted that he got a little lazy playing Jon Snow season after season and discussed the importance of changing it up as an actor.

“All actors crave variety and there can be a laziness you slip into when you go back to a character every year, and I definitely slipped into it in the past,” he said. “So there’s a point where you go, ‘I’m an actor. I got into this to play lots of different roles.’ I need to do everything possible in my ‘out’ period. That gap in series needs to be as challenging as possible.”