Lexicon - Watchers on the Wall

Disclaimer:  Some of the following memes and phrases were exclusively created and used by the WotW community. Many others were created elsewhere out in the GoT and ASoIaF fandom and their specific origin is not known to WotW staff.

Always Support the Bottom = Originated when HBO was still in the early stages of production and GoT had not yet aired. HBO used to make riddles and puzzles for the fans to solve to pass the time waiting for Season 1. The fans analyzed these things obsessively, looking for every little bit of information about the soon to air show. One of the things HBO gave to the fans, in particular a scroll sent to WinterPhil, had barely readable letters on the back.

After a fairly long time of racking their brains and some Photoshop wizardry they made out the words “Always Support the Bottom”. What could it mean? Was it a reference to Fleabottom? As it turned out it meant nothing at all. The document had been treated to look older, and what ever substance they used for it, had been stored in a container with the words “Always Support the Bottom” at, well, the bottom.

Since then “Always Support the Bottom” has become a symbol for the dedication of the fandom. Using this phrase means “Let’s stand together on this. We have been through much and will stay loyal to each other.” Loyal fans helping out the community are called “bottom supporters”. A more detailed explanation can be found here.

Aragorn’s tax policy – GRRM’s books frequently deal with themes that are not traditionally included in the fantasy genre such as the effect of financing on armed conflict and the difficulties of ruling kingdoms without the support of bankers.  This phrase was taken from a Rolling Stone interview in which GRRM questioned why Tolkien never addressed the difficulties of actually ruling a kingdom by quipping, “What was Aragorn’s tax policy?”

Asoiaf = A Song of Ice and Fire. Abbreviation of the book series on which GoT is based. Also used as the name of another fan site and wiki for the books.

Asoiaf Book Acronyms = The following is a list of frequently used abbreviations for the book titles.

BCog = Acronym for Brian Cogman, a Writer and now Assistant Producer for GoT. Also used for his on-again/off-again Twitter account. BCog is also an occasional guest of GOO.

Canon = Used to indicate that something was/is accurate to the original story in the books.  Usually refers to the show being in line with the books.  However, something can also be specified as “show canon” meaning something that is now part of the show story that is not part of the book story.

Chair = One of the first scandals or “gates” was one about a chair, so someone coined “Chair” as a bastard name for House Gatewatch.

D&D = Abbreviation for David Benioff and D.B. Weiss, Executive Producers for GoT

Gate = As in scandal, not really created by this community obviously, but has been used in various contexts of the show.  Some of the most well-known “gates” include the following:

GRRM = George R. R. Martin. Abbreviation for author of the series of books that GoT is based upon.

GOO = Game of Owns. A GoT podcast that recaps and reviews episodes during the season and analyzes book chapters in between. Show hosts are Kate, Eric, Micah and Zack.

Hodor = Besides the one and only vocabulary word for the character Hodor, it is often the first thing the first commenter of every post says.  WotW commenters often compete to see who can be the first one to say it.

Honeypot theory = A theory that posits Lady Talisa was a Lannister Spy, i.e., a honeypot.  A honeypot is a term that means a spy that uses sex to blackmail or kill agents.   Many fans believed this theory because of Talisa’s occasionally suspicious behavior, like writing letters in a language no one could read and then hiding the letters when people approached.   A fan produced video that explains the theory in more detail can be found here.

House Gatewatch = Referring to the site as the watcher and creator of all Game of Thrones scandals or “gates”. 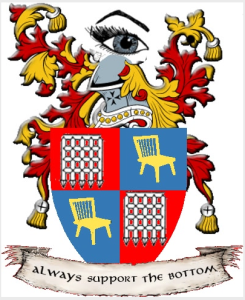 Coat of Arms for House Gatewatch

Indigo = From “The Great Indigo Debate”. Axechucker (aka, AxeyFabulous, FaBio, FaB, Kenny) declared that Indigo should not be part of the rainbow spectrum, that there should only be six colors. Axechucker asked Sophie Turner if she was willing to take a stand with him on this position but she refused. However, several other cast members took an opposing stance and defended Indigo’s status (including Lena Heady, Emilia Clarke, Nikolaj Coster-Waldau, and others). Axechucker then interviewed and won John Bradley to his side to oppose the inclusion of Indigo. In response, Aimee Richardson and some of her family and friends vociferously opposed Axechucker’s idea sending out pro-Indigo messages via Twitter. Richardson was so enthusiastic about the debate that she showed up to a TitanCon interview with Axechucker and Hear Marko Roar wearing a pro-Indigo t-shirt and Indigo colored shoes. In a conciliatory gesture, however, she also brought an anti-Indigo shirt for Axechucker. Since Aimee ‘Indigo Is the Way To Go’ Richardson has been recast in Season 5 the meme will probably only be preserved here–unless there is some reason to revive the debate.

Iron Price – In terms of the WotW community this phrase is often used to refer to the phenomena of “show piracy,” wherein hundreds of thousands of faithful viewers obtain the show via illegal means instead of subscribing to HBO.

In Nina Gold we trust = Referring to Nina Gold, GoT casting director. This phrase is used whenever there is some controversy about casting and the commenter wishes to eschew the argument indicating a belief that Nina Gold has always chosen the right person for the job and will continue to do so.

It is known = In the Asoiaf books from which it originated it is a Dothraki phrase that WotW commenters often use. Daenerys’ handmaidens would use it when they heard her say something that contradicts their commonly accepted reality. They would respond with what they think is the truth and follow that with “It is known.” There is an implied “you should already know this” vibe in it. For example:

Jojenpaste = The theory that the Children of the Forest engage in blood magic and upon Jojen’s death, used his remains to create a paste that they then fed to Bran.

Kuuh!  Kuuh!  Kuuh!  = The sound that Tyrion made as he described his cousin killing beetles.  Used within the community to indicate literal smashing but also figurative smashing as when D&D and/or GRRM dashes fan expectations and hopes.

Little birds = In the Asoiaf books Varys uses this phrase to refer to his many spies, which often included children. On WotW it is used to refer to the various contacts in and around the industry and online that feed the site news regarding GoT.

Littlefinger’s Jet Pack = A sarcastic reference to the fact that Littlefinger, on the show, seems to be able to travel great distances in extremely short periods of time in contradiction to what appears to be the natural progression of time for other characters.

Lord/Lady Gatewatch = Referring to the main force behind the site, WinterPhil (who is not now associated with the WotW community). The closest person to this would probably be Sue the Fury.

Nodor = An expression of discontent that Hodor will not make an appearance in an episode.

#NOONEUNDERSTAAANDS = Twitter hash tag created by @AngryGoTFan to indicate anger and despair at changes made in GoT from the Asoiaf books. WotW commenters and book fans also use it as a sign of sarcasm and humor.

Only Cat = What Littlefinger says to Lysa Arryn as he pushes her out of the Moon Door, “I have loved only one woman in my life.  Only Cat.”, which is book canon.  On the show, Littlefinger says “Your sister” instead.  This phrase can also refer to the online controversy that arose as a result of this change.

PW = Acronym for the Purple Wedding, which occurred in episode two of season 4 entitled “The Lion and the Rose.”  Also used to characterize something as being violent and tumultuous but resulting in a positive outcome.

RW = Acronym for the infamous Red Wedding, which occurred in ninth episode of the third season entitled “The Rains of Castamere.”  Also used to characterize something as being horrific, violent and bloody.

SanSan = the combination of  the names of Sansa Stark and Sandor Clegane, used by shippers who wish these two characters to be together romantically

Sullied = GoT watchers who have read the Asoiaf books. Most of the WotW staff are Sullied.

The Watchers = Four of the community’s original contributors. The four founders of WotW include: Sue the Fury, Hear Marko Roar, Axechucker, and Oz of Thrones.

Unsullied = GoT watchers who have not read the Asoiaf books. Oz of Thrones and Zack (of GOO fame) remain the only two Unsullied viewers on the WotW staff.