Lena Headey and the Starks on Season 6; Helen Sloan on her work on Game of Thrones | Watchers on the Wall | A Game of Thrones Community for Breaking News, Casting, and Commentary 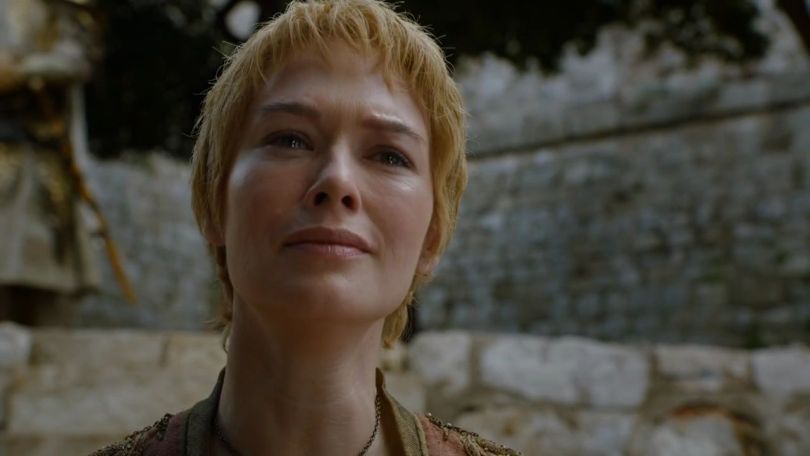 With less than a week to go, the cast is as chatty as ever in anticipation for Game of Thrones season 6. Entertainment Weekly has Lena Headey (Cersei Lannister) who reviews her character’s fall from grace last season and her choice of violence this season. The Stark Squad (term coined here at The Wall) reflect growing up on set and the chances of a reunion in USA Today. Lastly, but most certainly not least, series photographer Helen Sloan explores her experience on set and her astounding eye for photography at Tech Insider.

Writer James Hibberd kicks off by contrasting Headey in person with her character on Game of Thrones noting her tattoos, comfortable clothes, and short black hair because, as Headey says, “Why the f–k why not?” She’s about as different from Cersei as we could’ve hoped for and much cooler than we knew.

On Cersei’s new position in Season 6, Headey describes it as such:

Just a right laugh, really. It’s probably her most interesting season – because now she really has nothing to lose and she has everything to gain from a horrible position she finds herself in. Her relationship with Jaime is at an all-time weird level. Even though they’re back together, a part of her must f–king hate him. He let Tyrion go. He failed to protect Myrcella.

Yeah. She’s also super emotionally vulnerable in a way she’s never been before. It’s an interesting moment [in the season premiere] when she realized Jaime’s comes back with a dead daughter. [Showrunners David Benioff and Dan Weiss] write about Cersei showing nothing – no screaming – and then later there’s a moment with Jaime where she’s broken and it’s so genuine. It’s purely a mother lamenting the purity of her child. I never thought Cersei would say out loud what’s said in this scene; it was quite a beautiful moment. And then it gets all f–ked up.

Headey could be referring to the clip we previously saw released by HBO but before the episodes air, it’s purely speculation.

She goes on discuss Cersei’s Walk of Shame last season and the comments she received after for using a stunt double.

It’s worsened things! I don’t think she’s found any humility. She’s even more self-preservatory. She can’t believe that happened to her, of all people. It’s fueled her desire for power and her desperation to prove that she’s somebody worth considering.

Really great ones. But some people thought I was less of an actress because I didn’t get my t-ts out.

She continues this lesson of badassery by defending her decision (even though she didn’t have to).

You know what? It was really a bit shocking. I’ve done nudity. I’m not adverse to it. But I know I’m a very emotional actor and I get really driven by that. In order to do my job, I allow myself to be really vulnerable. I don’t know any other way to do my job. Things really affect me. And the thought of being naked for three days and trying to contain her in the way she would be I think I would feel very angry. I didn’t want to be angry. I don’t think Cersei would be angry. I did what I thought she would do, emotionally. And wonderful Rebecca [Van Cleave, Headey’s stand-in] was able to contain herself and be naked. She found it very difficult, obviously. It’s not a natural thing to do. I film every year and I have kids and they know me now and [being naked in the scene] was just too much on top of that. So yeah, people that get it thought it was great. I didn’t phone it in; I was actually there for three days with Rebecca.

Then ends by further teasing Season 6:

It just keep getting better. It’s so juicy, and it’s so f–king dark, and so emotionally clever, in this landscape. It sounds so cheesy, but I’m really grateful to be part of something so cherished.

Headey displays more of her down to Earth attitude by going into the Franken-Mountain, Faith Militant, and the series’ Emmy win at Entertainment Weekly. 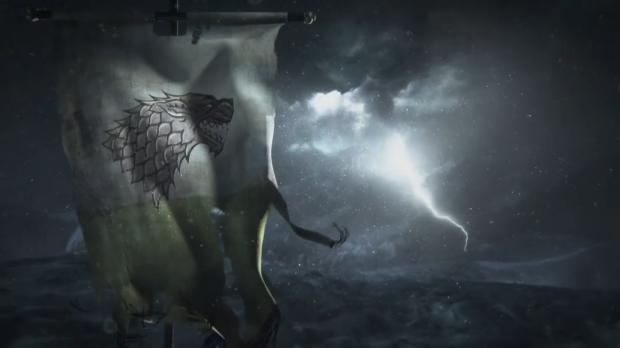 Game of Thrones first began as a story of The Stark family and through the seasons, we’ve seen that family torn apart in just about every direction in Westeros. The Young Wolves –Maisie Williams, Sophie Turner, and Isaac Hempstead Wright- talk their characters current position and offer thoughts on a family reunion:

Maisie: I think that would be very cool, but it would almost be too much of a happy ending for this show.

Sadly, she’s probably right. The cast continues by reflecting on their personal growth on the show and their character’s.

Sophie: I can’t begin to think of how much she’s changed. [At the start] She’s vulnerable, naïve and sees the world through rose-tinted glasses. Now, she’s hardened. The only way to survive now is to be her own woman and a leader in her own right.

Maisie: Arya is now learning to use her ears and other senses [which ultimately will] make her a better assassin. But the beginning will be spent as an underdog and will be a real struggle.

She definitely experiences more than any 12-year-old, more than any human, should have. She’s got this (kill) list and she’s carried the pain of losing her family members. It changes a person. This season, we see her get lost in someone else for a bit.

Isaac: I like to imagine it’s as if he’s watching the show, with the idea of seeing what’s going on all over.

There’s an enormous amount of hubris with his power. Bran needs the Raven to tell him to stay on the right track, master his power and then use it.

[He concludes by noting Bran is taking the Tully route and doing his duty.]

He’s followed his destiny relentlessly. He had the opportunity on his way to the Raven’s cave to give up. It’s a great metaphor for doing what you feel you have to do, no matter what.

USA Today has much more of this in-depth interview where the cast discusses growing up on set, their future roles, and more. 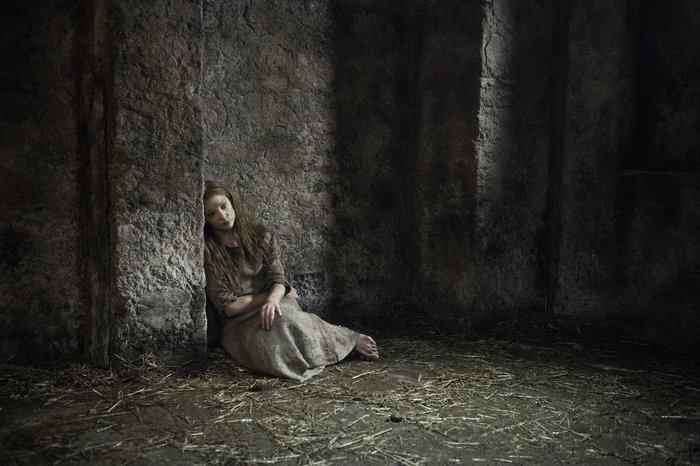 Aside from having the best job in the world (she gets to watch the series unfold live and document it throughout), lead photographer Helen Sloan does an astonishing job capturing the huge moments on set. She shares her experience with Kim Renfro at Tech Insider.

I can’t remember a time when I wasn’t the one who took photos.

She reminisces getting her first camera at the young age of 11 and adopting a “fly on the wall” persona. She further shares how she became involved in film and what it means to her.

[Working in the film industry] was something I always wanted to do but I thought only people in America did that, not people from a small town in Ireland.

Until a very special series found its way to her through first season producer Mark Huffam back in 2011.

[Huffam] said ‘Look, HBO is rolling into town, it’s a huge production. This the pilot that I’m gonna help produce and I think you should put in your portfolio.

Both had their doubts considering there were already another 20 photographers up for the job but Sloan comments that her photography style more than fit the show. 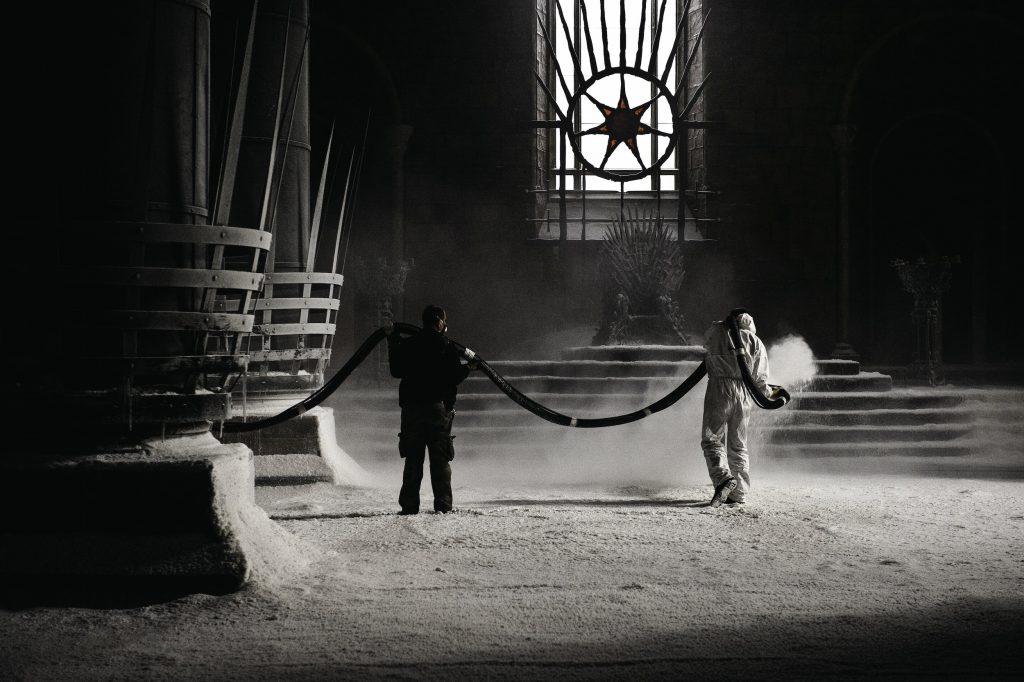 Credit: Helen Sloan as she captures the crew preparing the Throne Room for Dany’s vision in S02E10

Tech Insider has more with Sloan and her incredible photography as she documents the Game of Thrones series.

Sunday night can’t come soon enough! What are your thoughts? Let us know below!