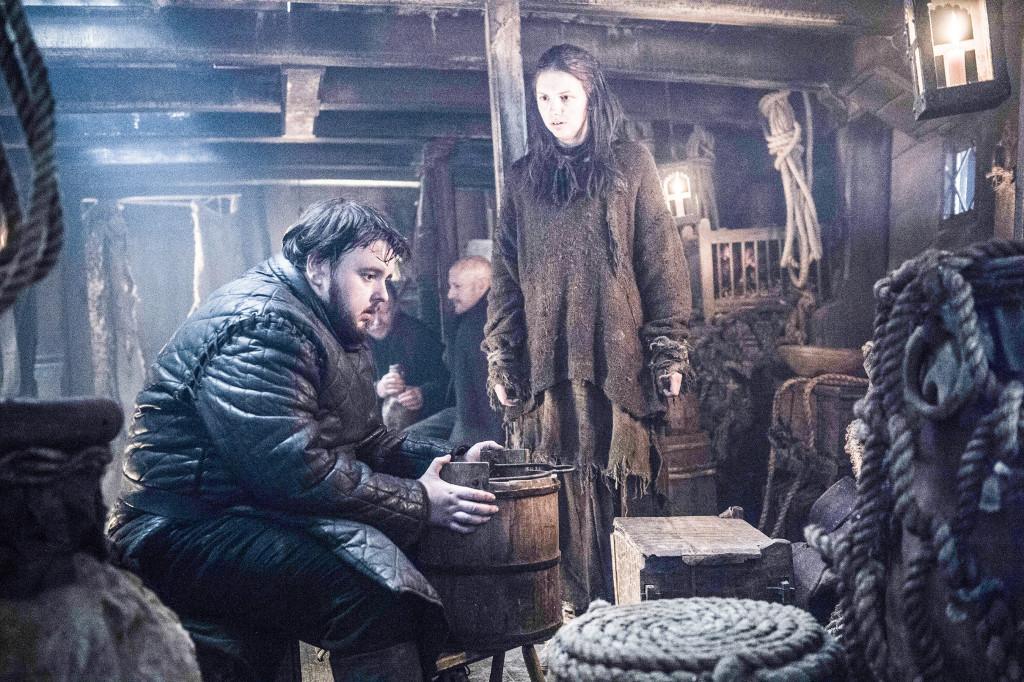 This coming Sunday in “Blood of My Blood,” we’ll finally get to see a moment many Game of Thrones fans have been waiting for, for a long time: Samwell Tarly will be reunited with the harsh father who forced him into the Night’s Watch. With Gilly and the baby by his side, Sam is headed to Horn Hill and we can only imagine how this complicated family reunion is going to play out.

Luckily we have two interviews with John Bradley and Hannah Murray via IGN and The Hollywood Reporter to offer input and a few teases as to what we can expect, in “Blood of My Blood.”

Talking to IGN, Bradley discusses how seeing Horn Hill and the Tarlys sheds new light on Sam and his journey throughout the series:

What I really liked about it was seeing not only Oldtown, but seeing the south and where Sam comes from and his relationship with his family. It all puts everything into context. You see where was raised. It’s a very beautiful place. It’s a kind of bucolic place, and you realize how much of a fish out of water he was at Castle Black, just how hard life must have been there — but how hard life was at home as well. It all makes sense. All of the psychological, emotional, developmental boundaries that he’s got are because of this relationship with his father, with his family. […] You start to make sense of why he’s so damaged, why the journey to Castle Black for him was such a momentous one, and how he was wrenched out of that home life and how alien all of that world was to him. It feels like a different show because they’re such vastly different visual landscapes that they don’t feel like there’s any through line between them.

As for how Gilly handles herself against the imposing Randyll Tarly (James Faulkner) and his wealthy family, Murray explains to IGN:

I think she kind of figures out Randyll pretty quickly and decides he is not a good person, and she’s very clear on how she feels about people like that. Obviously the father kind of looms so large in this story, but it’s also Sam’s mother and Sam’s brother and sister. It’s quite a complicated family, and it’s a very interesting dynamic. It’s not all bad. There’s a lot about that that’s very positive and very interesting to her. I think she expects quite a different reception than she gets, actually.

Read the complete interview at IGN to hear more of their thoughts on the new episode, and about Game of Thrones‘ full-on embracing of fantasy!

In The Hollywood Reporter, Hannah Murray speaks more on Gilly’s mindset, on the journey south, far from the home she knows beyond the Wall.

“It’s so lovely to play somebody who is so excited about everything she experiences,” the actress says.  “Everything is new to her. Her entire world just expands and expands. She was pretty thrilled about the Castle Black kitchen, for one. This adventure, going south for her, it’s like going to a fantasy land. It’s like a fairy tale, really. The fact that she gets to go, and it’s real? She’s blown away by it.”

“One of the things that’s beautiful about them, and they have in common, is that they’re both infinitely curious,” Bradley tells THR. “They both want to know about things. Knowledge blows their minds. With Sam, it’s dragonglass. With Gilly, it’s an orange.”

The actors agree that going back home is very scary for Sam, with his rough childhood under his father’s eye. Murray says, “We’ve seen Sam face these terrifying nightmares, but this is an incredibly different nightmare,” she says. “Your fear is very different when it comes to your family. You can be brave in one big situation, and completely afraid in another. No matter how much of a grownup you are in the world, you go back home and you can regress to being a kid again.”

“The things that scare you as a child tend to scare you your whole life,” John Bradley tells THR. “It’s because you wear the scars. There’s something about the scars that you wear and the regression that exists.”

For more on “Blood of My Blood” and Sam & Gilly, visit the article at the Hollywood Reporter!