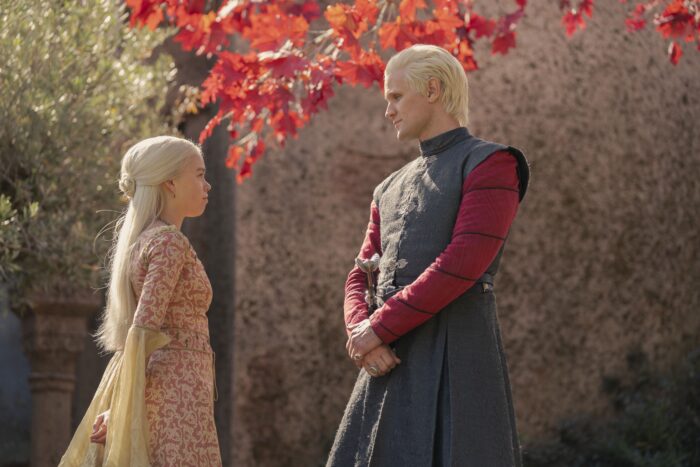 House of the Dragon went full Targaryen last night, as Prince Daemon returned to King’s Landing and tried to seduce his niece. “King of the Narrow Sea” brought us scandal, secrets, spying, a betrothal, and another exile. Let’s get the (regular, not moon) tea on the episode with today’s interviews and videos! 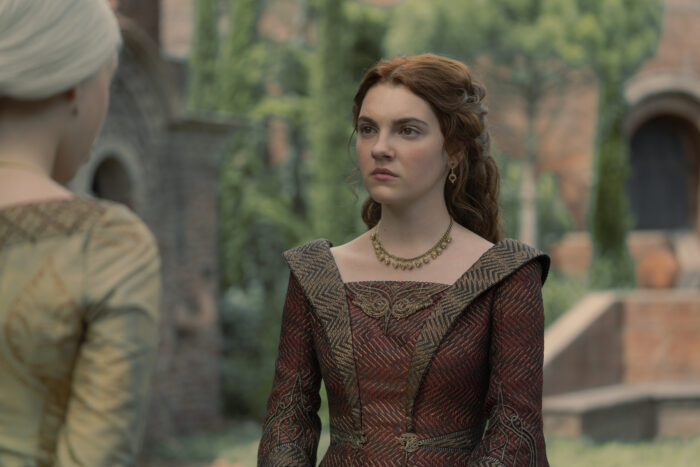 Speaking to Newsweek, Emily Carey explains how she overcame her reservations about filming her sex scene with Paddy Considine. “It scared me, because at that point I still hadn’t met Paddy, I didn’t know how much of a joy he was and how easy he was going to make [the scene], and all I saw was, you know, a 47-year-old man and me, I was a bit concerned. And having that outlet of the intimacy coordinator, to be able to talk everything through and not be shunned, or not feel awkward, or not feel like ‘Oh, this isn’t your job. I don’t want to make you feel uncomfortable but can I ask you…’ it was never any of that, it was just that open dialogue.”

Carey goes on to say that the open dialogue was key to making everyone comfortable on set, as they were told, “‘Look, this is how we’re approaching the show. This is how it’s going to be different from the original. This is what we want to talk about. This is what we want to put out. This is how we want the viewers to view the women in our show.'” Having women involved “behind the scenes” was important as well, as she adds, “We had an amazing team, we had, of course, female directors, I worked with the amazing Clare Kilner who was fierce, and lots of women producing this show as well, and Sarah, one of our writers, amongst many others in the writers room, I’m sure.”

It was an experience that Carey will never forget. “It was an amazing thing, and it was empowering being on that set as a young girl and being treated the same as all of these very established men. It was great, I think they approached this in the best way they could have done.”

Head to Newsweek for more, including Carey’s thoughts on Alicent’s relationships with her father and with Rhaenyra. 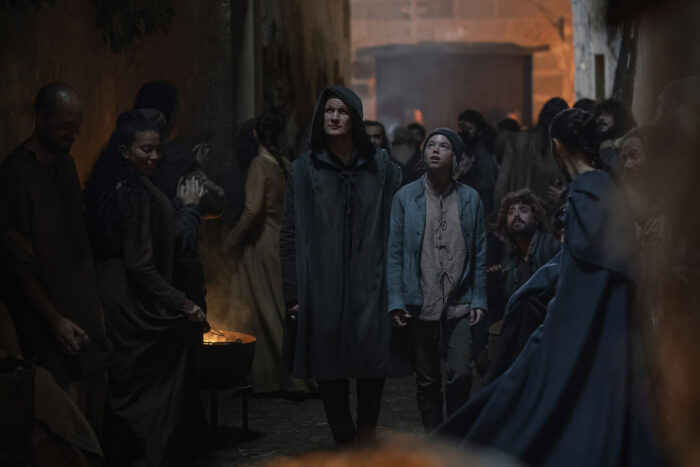 Milly Alcock had an even more revealing sex scene, as well as incestuous kissing in a brothel. In an interview with The New York Post, she shares that while the make out session wasn’t awkward, walking through the brothel certainly was. “[Matt Smith and I] were just kind of mates. So, it was quite comfortable” but that they hadn’t seen any of the brothel scenes in rehearsal, only while filming. “That was quite shocking. You’re like, ‘This is kind of weird and silly.’ There were extras who we had just met who were like, 69-ing for 12 hours. It’s pretty gnarly. We felt pretty overdressed, because everyone else was nude.”

As to how she feels about Rhaenyra’s two love interests in this episode, Alcock says, “I think it’s complicated, I think Daemon is good for her … but whether or not he’s the right thing for her, time will tell.” She continues, “I think that she wants to be seen, and ultimately Daemon and Criston Cole are the only two people who really see her. Both of them see her for different reasons. Daemon kind of has the upper hand, and Rhaenyra has the upper hand with Cole, and that turns her on a bit. I think that she genuinely likes him. But I don’t think she would pick him over Daemon, ultimately.” 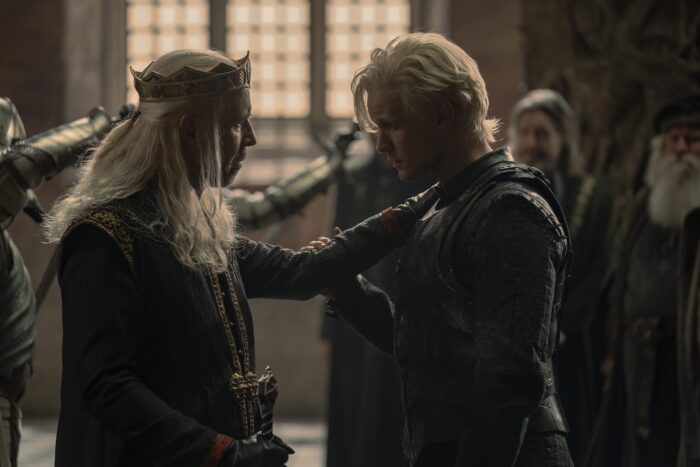 Another complicated relationship is that of Daemon and his brother, King Viserys. Matt Smith gives his thoughts on their brotherly dynamic to Entertainment Weekly. He believes “there are different power dynamics. One time one is in control, then the other is in control. Hopefully you’ll feel a sense of history and brotherhood when you watch it.” He adds, “[Daemon]’s always kind of flipping sides, I suppose, in many ways aligning himself with his brother or he’s not… I don’t think it’s about an ambition to throne and all that. I think a lot of it is about his brother.”

In the same interview, Paddy Considine speaks to the challenges Viserys faces trying to hold his kingdom together. “He understands the politics of what it means to be king. He understands what the throne does to people’s egos, particularly the people around him. He understands the game of thrones. When I played the character, I always had that in the back of my mind. There’s a possibility that people are conspiring around you at all times, and it’s absolutely so important that you find the anchors, the people that you can really, really trust. So it’s a difficult life being the king.”

Considine also clarifies what’s happening to Viserys physically and how it’s symbolic of the toll that “difficult life” is taking. “He’s actually suffering from a form of leprosy. His body is deteriorating, his bones are deteriorating. He is not actually old. He’s still a young man in there. He’s just, unfortunately, got this thing that’s taken over his body. It becomes a metaphor for being king, and the stress and strain that it puts on you, and what it does to you physically, what it does to you mentally.”

Check out the entire article at EW.

In this week’s “Inside the Episode,” showrunners Ryan Condal and Miguel Sapochnik, director Clare Kilner, and cast members Milly Alcock, Rhys Ifans, Paddy Considine, and Emily Carey discuss Daemon and Rhaenyra’s motivations, and how their scandalous night out affects the royal family.

In case you missed it, here is the preview for episode five: