Game of Thrones is confirmed for San Diego Comic Con this year, and HBO is rolling out even more fun for the week. Traditionally, they debut new merch with con exclusives at SDCC, and this year is no exception. Today, HBO announced officially that they’re having a Game of Thrones scavenger hunt at SDCC, encouraging fans to visit booths searching for specified GoT items such as the show’s new Daenerys-themed jewelry or a Night’s King mask, ultimately for the chance to win a sweet Comic Con prize pack.

*Update, per HBO:  Fans will now have until 5PM on Saturday, July 23rd, to complete all of the Twitter photo challenges! Once those are completed, hunters can go to USAopoly’s CLUE: Game of Thrones Experience Booth #1017, between 9:30am-5pm PT on Saturday, to enter their name, contact info and Twitter handle into the raffle for a chance to win one of 15 prize packs.*

How do attendees take part? According to HBO, hunters must complete all of the listed challenges by posting photos of themselves with the GoT products on their public Twitter profiles, along with the hashtag #GoTScavengerHunt.

Once you’ve posted everything required to Twitter using #GoTScavengerHunt, hunters must line up at the USAopoly’s CLUE: Game of Thrones Booth #1017 on Saturday. 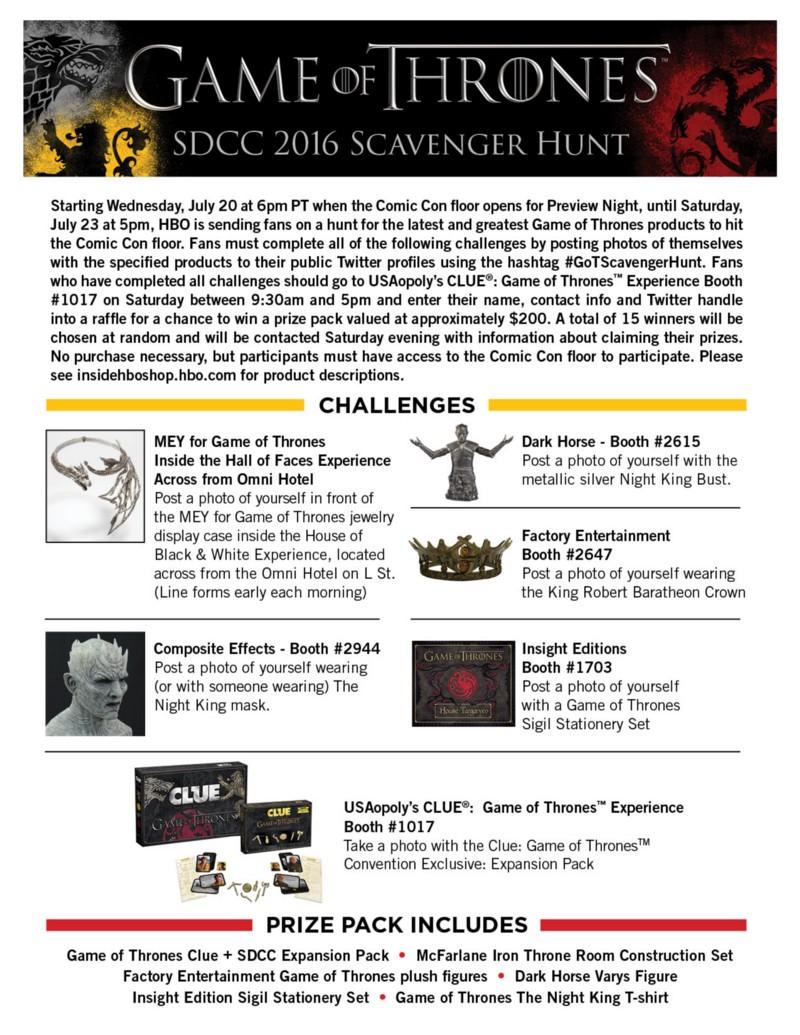 So that’s the challenge! If you’re going to be hitting the floor at the convention, why not take a few photos while you’re at it, and tweet them out. That really is a great prize package.

Some other Game of Thrones products at the convention you may want to check out: