George R.R. Martin Reveals the Title of His New Story | Watchers on the Wall | A Game of Thrones Community for Breaking News, Casting, and Commentary 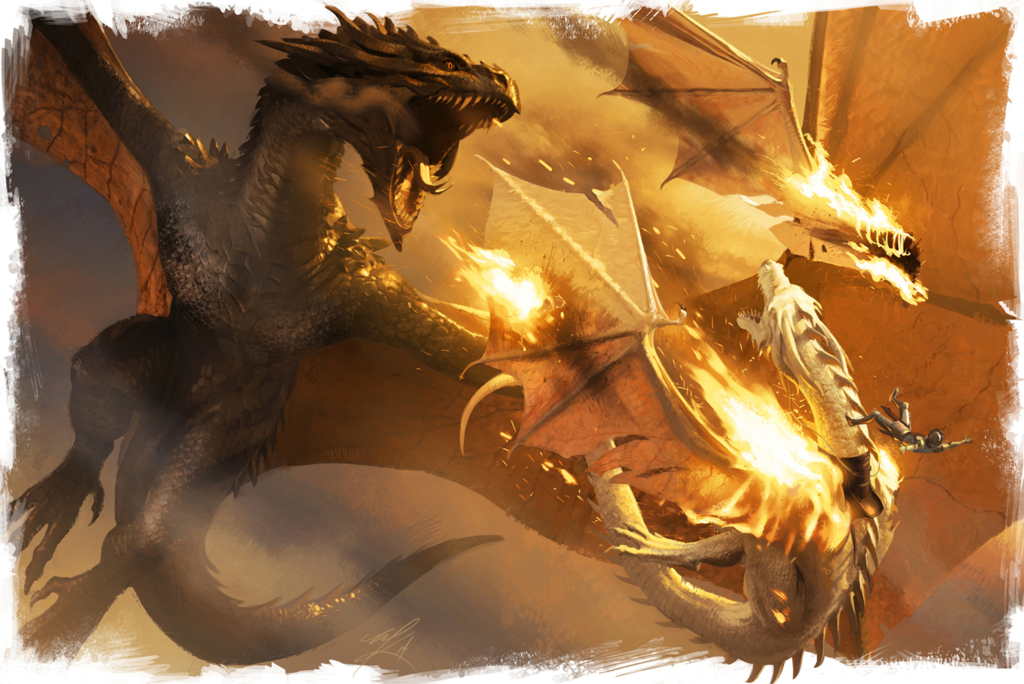 Battle Beneath the Gods Eye, Art by Michael Komarck

There was a flurry of excitement last week, with the news that George R.R. Martin would be releasing a new story from the world of A Song of Ice and Fire. Fans speculated we might see a new addition to the writer’s Dunk & Egg novella series, or another sample from The Winds of Winter. It also seemed very possible we might see another piece of Westerosi history, a la “The Princess and The Queen.”

Yesterday, Martin published a blog entry detailing the new anthology and his own contribution, putting an end to the swirl of rumors.

As many had speculated would be the case, Martin reveals that the novella in Book of Swords will be his Targaryen history piece, “The Sons of the Dragon.” If the title is familiar to you, there’s a reason why. The story is not one-hundred-percent new, as it was first read to fans at LonCon in 2014.

Those of you who enjoyed “The Princess and the Queen” in DANGEROUS WOMEN and “The Rogue Prince” in ROGUES will probably like this one too. It’s water from the same well. A history rather than a traditional narrative. A lot of telling, only a little showing. (The opposite of what I do in my novels). But if you’re fascinated by the politics of Westeros, as many of my readers seem to be, you should enjoy it. As the title suggests, “The Sons of the Dragon” chronicles the reigns of the second and third Targaryen kings, Aenys I and Maegor the Cruel, along with their mothers, wives, sisters, children, friends, enemies, and rivals. If you’re read something to that effect on the web, good, that much is right.

Martin began working on the Targaryen history several years ago for The World of Ice and Fire, and finding he’d written too much, pulled out several large chunks. Ultimately these Targaryen stories detailing the history of Westeros will be presented unabridged together in a book called Fire & Blood.

Martin also shares in his blog entry the “impressive” lineup for Book of Swords, including an introduction by the anthology’s editor Gardner Dozois, and tales from Robin Hobb, C.J. Cherryh, Garth Nix, and many more.

Introduction by Gardner Dozois
THE BEST MAN WINS, by K.J. Parker
HIS FATHER’S SWORD, by Robin Hobb
THE HIDDEN GIRL, by Ken Liu
THE SWORD OF DESTINY, by Matthew Hughes
“I AM A HANDSOME MAN,” SAID APOLLO CROW, by Kate Elliott
THE TRIUMPH OF VIRTUE, by Walter Jon Williams
THE MOCKING TOWER, by Daniel Abraham
HRUNTING, by C.J. Cherryh
A LONG, COLD TRAIL, by Garth Nix
WHEN I WAS A HIGHWAYMAN, by Ellen Kushner
THE SMOKE OF GOLD IS GLORY by Scott Lynch
THE COLGRID CONUNDRUM, by Rich Larson
THE KING’S EVIL, by Elizabeth Bear
WATERFALLING, by Lavie Tidhar
THE SWORD TYRASTE, by Cecelia Holland
THE SONS OF THE DRAGON, by George R.R. Martin

Book of Swords will be in stores this October in hardcover.