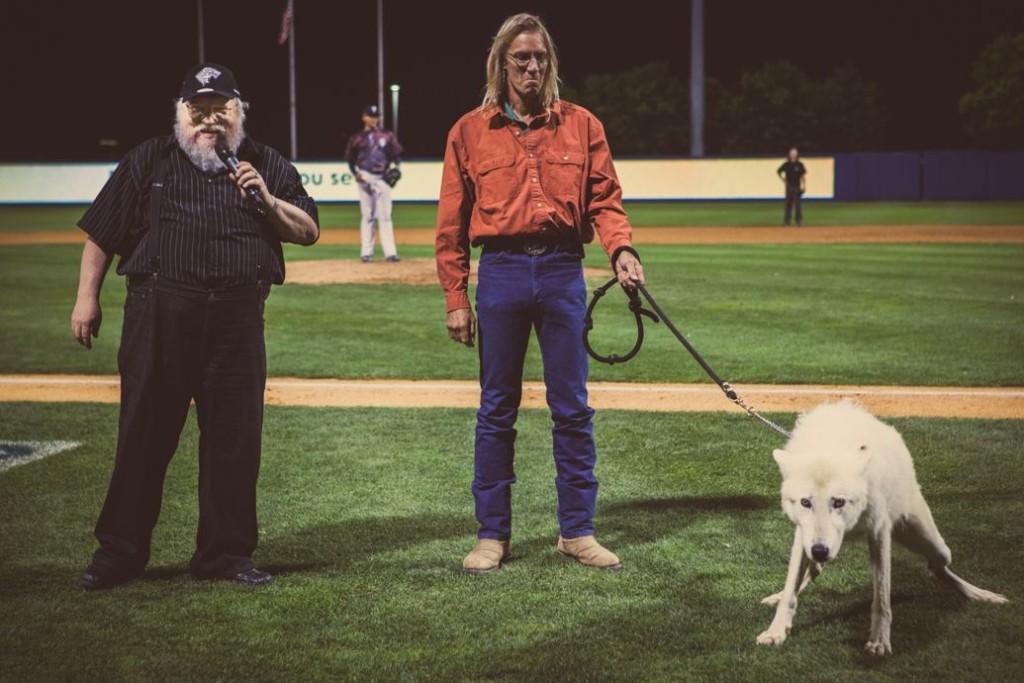 A Song of Ice and Fire author George R.R. Martin comments on the ending of his series while attending a Game of Thrones themed baseball game in Staten Island, New York!

Before he comments on the ending while talking to the Observer, Martin has a few words about the Golden Age of Television and how he feels being a part of it:

It’s great! And I’m very glad that we’re such a prominent part of it. This kind of thing, where there are so many reviewers who review every episode as it comes on, and there are 20 different reviewers, probably more than that, who are reviewing us episode by episode by episode—and not only us but Mad Men and Breaking Bad in their day, and a handful of other shows that are getting a tremendous amount of attention—is very gratifying.

On the ending, if it will be apocalyptic, and being inspired by Tolkien:

I haven’t written the ending yet, so I don’t know, but no. That’s certainly not my intent. I’ve said before that the tone of the ending that I’m going for is bittersweet. I mean, it’s no secret that Tolkien has been a huge influence on me, and I love the way he ended Lord of the Rings. It ends with victory, but it’s a bittersweet victory. Frodo is never whole again, and he goes away to the Undying Lands, and the other people live their lives. And the scouring of the Shire—brilliant piece of work, which I didn’t understand when I was 13 years old: “Why is this here? The story’s over?” But every time I read it I understand the brilliance of that segment more and more. All I can say is that’s the kind of tone I will be aiming for. Whether I achieve it or not, that will be up to people like you and my readers to judge.

He discusses being in the spotlight, clickbait journalism and more over at Observer!

While in Staten Island, Martin also attended a special one-night-only Thrones-themed minor league baseball game, with Rolling Stone writer Sean T. Collins. The game featured the Staten Island Yankees (named the Direwolves for the occasion) and the Hudson Valley Renegades (the Lannisters). He took the time to sign some Direwolves merchandise as well as interact with some lucky fans!

His attendance was also a fundraiser for New Mexico’s Wild Spirit Wolf Sanctuary which is a non-profit rescue facility for our furry friends (in the photograph above).

The team not only wrote a hefty check for the organization but also launched an auction of the custom Thrones-themed jerseys for the cause!

In the end, the Starks finally beat the Lannisters and Martin gave some fitting last words regarding his anticipated sequel:

And remember, Winter is Coming.

Head on over to Rolling Stone for the full story!

It’s nice to see Martin take a break and enjoy himself while also helping a cause! What do you think of his words regarding the ending? Let us know in the comments section!