Game of Thrones now has another accolade to add to its collection. The show has officially been entered into the Guinness World Records 2015 book as the most pirated TV program.

Time Warner CEO Jeff Bewkes once said that “[piracy] leads to more paying subs… Game of Thrones is the most pirated show in the world. That’s better than an Emmy.” Since we’re celebrating the piracy of Thrones, we have some recent statistics that are relevant.

The following numbers are truly staggering, giving a clearer numerical insight into the legions of fans the show has built over the years. All statistics in this post are taken from Tru Optik. 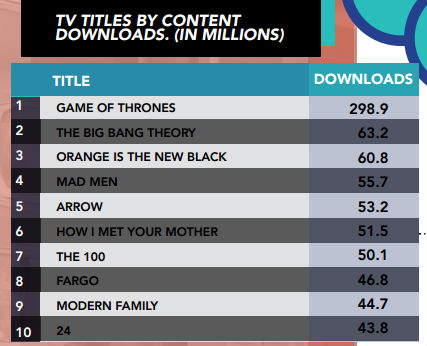 This image shows the number of downloads of the most-pirated shows in Q2 2014 (April, May and June). This is especially significant for Game of Thrones, as these were the only three months in which it aired this year. As we can see, Thrones was pirated almost five times more than its closest competitor, The Big Bang Theory.

Tru Optik provides a chart on the fourth season’s premiere episode, breaking the numbers down further. It shows just how much potential revenue piracy is costing HBO. All numbers are representative of the first 72 hours since the episode aired. 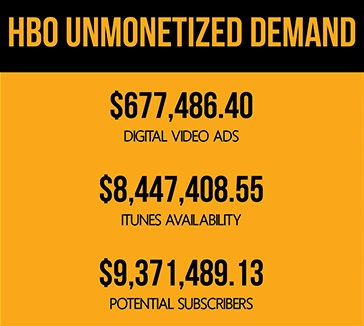 From a demographic perspective, the top ten countries that engaged in this piracy were the United States, Australia, Brazil, Canada, the United Kingdom, India, Sweden, the Netherlands, the Republic of Korea, and Greece. The US itself comprised 12.302% of the downloads. Furthermore, for 21.014% of the pirates, this was their first time torrenting anything.

Finally, we can see what other shows were popular with the Game of Thrones pirates at the time. 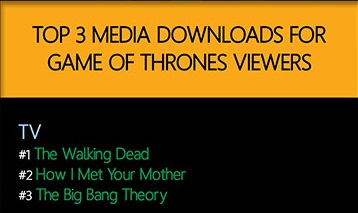 It is important to note that all of these statistics (except those in the first image) are in relation to just one episode. A lot more information can be seen on the full chart at Tru Optik.

Cian: Thanks to The Wolves of Winter for tipping us off to the Tru Optik stats a while back.