Looking for something to do during the Game of Thrones premiere besides beholding its splendor, furiously livetweeting or playing a drinking game? How about a nice (or not so nice) game of bingo? Courtesy of Watchers on the Wall, custom bingo cards for the premiere episode can be downloaded straight from this post.

Keep your eyes peeled for Game of Thrones mainstays such as sex and Cersei drinking but be mindful of Jonaerys (and Jonsa), those dragons, Arya’s murderous capers, blood, the opening credits and flashbacks! 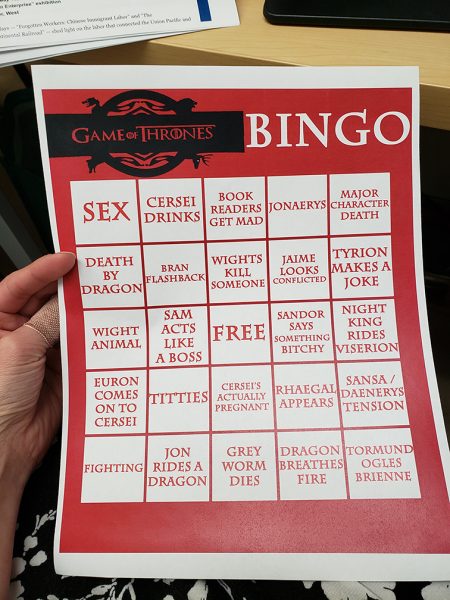 There are four versions for you and your friends to play. If you’re hosting a party, make sure you have a legit prize too. People love prizes. And don’t think too hard about these. If you can prove it, you can claim the square. It’s bingo and I made it in two hours:

Enjoy these and make sure you tag Watchers (@WatchersOTWall) and/or me (@starkalypse) if you get a chance to play, especially if you win! Have a great premiere, everyone!