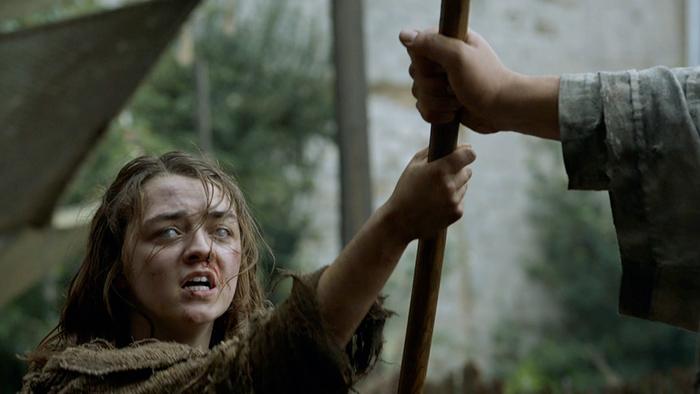 We have a lot of Game of Thrones news for you today as we eagerly await Sunday night! With IGN, Maisie Williams discusses Arya’s character development and new obstacles she faces being blind, and at EW, Hannah Murray discusses Sam and Gilly “setting out on their own path.” Liam Cunningham examines Davos’ journey to find new purpose in season 6 at USA Today. We also have a video interview with Iwan Rheon and more under the cut!

Having seen only a small bit of Arya’s story in Sunday night’s premiere, we still have loads of new Arya moments to look forward to. Talking to IGN, Maisie Williams teases what’s next:

This year is a growing year for Arya, and it’s an important year. Though right now it’s not the Arya that we want to see and are used to, in the future we might look back and be like, ‘Hey, she needed that.’

She further explains Arya will be “learning a lot,” this season and that “She has to rely on a lot of other people, because she can no longer see.”

The lone wolf must begin to trust others again this season which is something we haven’t seen from Arya in quite a while.

That has been the main thing that has kind of been her weapon without even realizing, without knowing she depended solely on her eye sight. Now she has to rely on a lot of other people and trust them in order to help her, which is not a position that she’s usually in. It’s kind of like she’s being blackmailed. She has to trust people that she can’t even see, and rely on them to help her. That’s really, really difficult for her, but ultimately a very, very strong season. She learns a lot of very valuable lessons that she ultimately uses against her teachers.

Maisie talks Arya’s temporary setback, her relationship with the Waif, and more over at IGN.

At USA Today, Liam Cunningham gets into Davos’ recent loss of allies and his new position in Season 6.

It looks like he’s out of a job. Stannis is gone. (Davos’) reason for being in the show is gone. I think people would have liked seeing Jon Snow with someone on his side and Davos seemed like the right man in the right place at the right time. And then, (Jon) is gone.

He reviews Davos’ intentions to serve Jon beyond the grave (as we started to see in the premiere) and his alliance with The Red Woman.

From the get-go this season, there’s an immediate threat to his life. Melisandre is there as well and the powers she has may prove to be very useful.

Cunningham considers what peaked his interest in Game of Thrones, reflects on Davos’ relationship with Stannis, and more with USA Today.

In 60 seconds, Iwan Rheon reveals his most challenging role, dream roles, and more! Check out the video with BAFTA Guru below:

John Bradley and Hannah Murray talk to Entertainment Weekly in a new interview today about Sam and Gilly’s relationship, and how their characters have changed over the seasons.

As Bradley previously confirmed in another interview, the pair aren’t aware of Jon Snow’s death.

Murray shares her thoughts on the matter. “I think it’s interesting about them not knowing about Jon’s death because it’s all been a bubble this year to a certain extent, but actually what it really shows is that these two characters, they’ve broken out on their own.[…] They don’t even know what’s happened, and there’s no turning back for them. They really are setting out on their own path and not looking back.”

The actress also reveals that after several years of wearing various sacks, Gilly will finally have a new costume in season six!

In a hilarious sketch, YouTubers Lemonade Stand play out the battle between the Sullied (book readers) and Unsullied (non-book readers) and what happens now that the show has passed the books.

Last night Amy Schumer parodied Game of Thrones on her show Inside Amy Schumer. Watch the promo below and see the full episode and sketch over at Comedy Central.

Late night host Jimmy Fallon catches you up on what you may have missed on Sunday night’s Game of Thrones premiere with a recap rap from The Roots:

Screen Junkies has created a second “Honest Trailer” for Game of Thrones.

Where do you hope to see Arya and Davos go from the premiere? Are you excited to see Iwan Rheon play another evil role? Found any other Game of Thrones sketches or parodies this week? Let us know in the comments!