Game of Thrones Season Four is UK's fastest-selling box set in a decade | Watchers on the Wall | A Game of Thrones Community for Breaking News, Casting, and Commentary 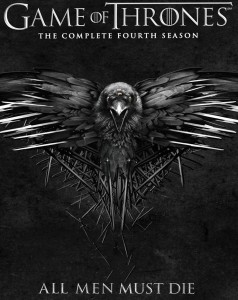 Well well well, season five has not started yet, and we are talking records already. It’s the recently released Season Four box set that is topping the charts at the moment.

Digital Spy reports that the previous season of Thrones has become the fastest selling TV box set in the UK within the last decade. The first week of sales has seen 157,000 copies sold, beating the previous record holder – wait for it – Game of Thrones Third Season box set by over 7,000 copies. Impressive. The UK first-week box set record beyond Thrones is more than ten years old: the first season of Little Britain moved 224,000 copies in the first week in 2004.

We will be on the look out for US numbers as well, of course. Given that Game of Thrones S4 on Blu-ray and DVD are currently 2nd and 3rd place best-sellers, respectively, among all movies and TV shows on Amazon (trailing only Big Hero 6), it would be safe to say those are pretty darn high, too.