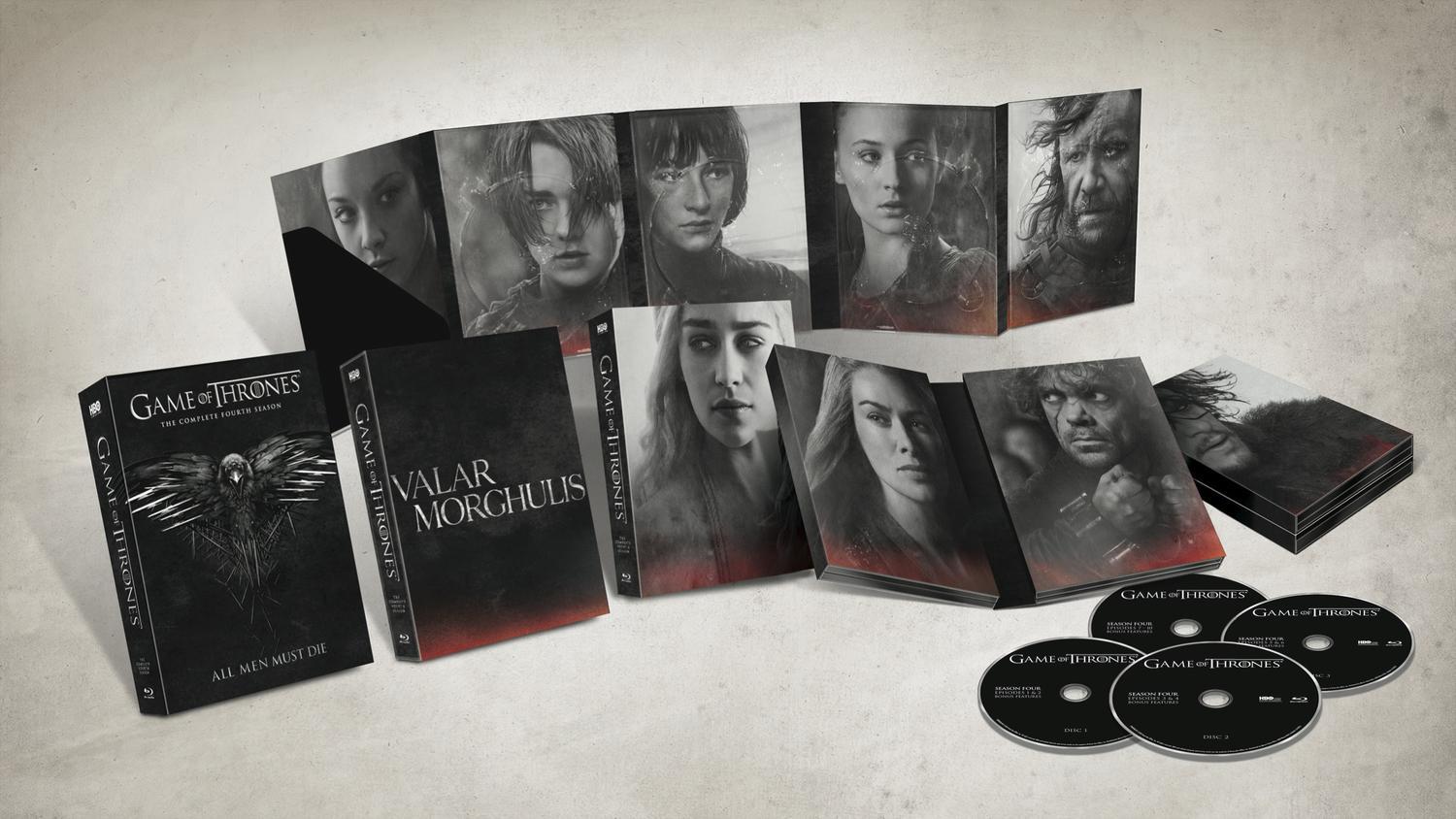 At this late stage in the game (har), we’ve come to expect the best from the box sets of each season of Game of Thrones. Season 4 doesn’t disappoint in this regard. I won’t say my expectations were exceeded – because I knew exactly what to expect – but they were certainly met. The more attentive of us will already have seen the majority of the bonus features via leaks on YouTube, but it was still nice to watch them on a big screen in crisp Blu-ray quality.

Speaking of quality, the video- and audiophiles are in for a treat. This is a great looking show anyway, but the uncompressed 1080p visuals on the Blu-ray are sublime. Visually, three standout sections for me were the Purple Wedding, Oberyn’s “I will be your champion” scene with Tyrion, and the entirety of “The Watchers on the Wall”. The PW is so colourful and vibrant, the set design being deservingly flaunted to its extremity. The scene between Oberyn and Tyrion proves that no corners were cut on the visual side of getting the episodes onto disc. There are absolutely no crushed blacks in the scene, and the lighting really shines (great verb use there) throughout their conversation. I was unlucky enough to be living on the opposite side of the world during the IMAX showings of “The Watchers on the Wall”, but I’ll gladly take the Blu-ray as a replacement. The whole episode is an hour well spent at the best of times, and doubly so in such pristine quality.

On the sound side of things, the set holds up just as well. As always, each episode is delivered with a DTS-HD Master Audio 5.1 surround track, and it lends itself extremely well to the show. Sound plays such a strong, characteristic role in Thrones, and the quality on display here only augments that fact. The mixing is near perfect, with dialogue always remaining clear and audible, foley effects seamlessly interweaving with on-set sounds, and Ramin Djawadi’s score flawlessly gracing setpieces both intimate and dynamic.

Once again, the Histories and Lore section is a standout feature, offering in-depth yet concise insights into areas of note the show is often unable to convey in its limited screentime. Concepts and character motivations are expounded upon, and the art is absolutely gorgeous.

We’ve already shared most of the other extras on the site and they’ve been discussed to death, so I’ll spare the dead horse a beating. I will mention that I found the deleted scenes to be lacking. The Daenerys/Missandei one has some shoddy CGI, and the Bronn/Shae one – while shedding extra light on the situation and containing nice sentiments from the sellsword – doesn’t really warrant a place as one of only two deleted scenes. I will say this in their favour, though: the scenes are edited properly, in that we can see exactly where they would have existed in their respective episodes. Soundtrack cues are also present. On the concept of including deleted or extended scenes? Well, we know from the pre-season trailers that completely different takes/scenes exist… I’d prefer to see some of those. 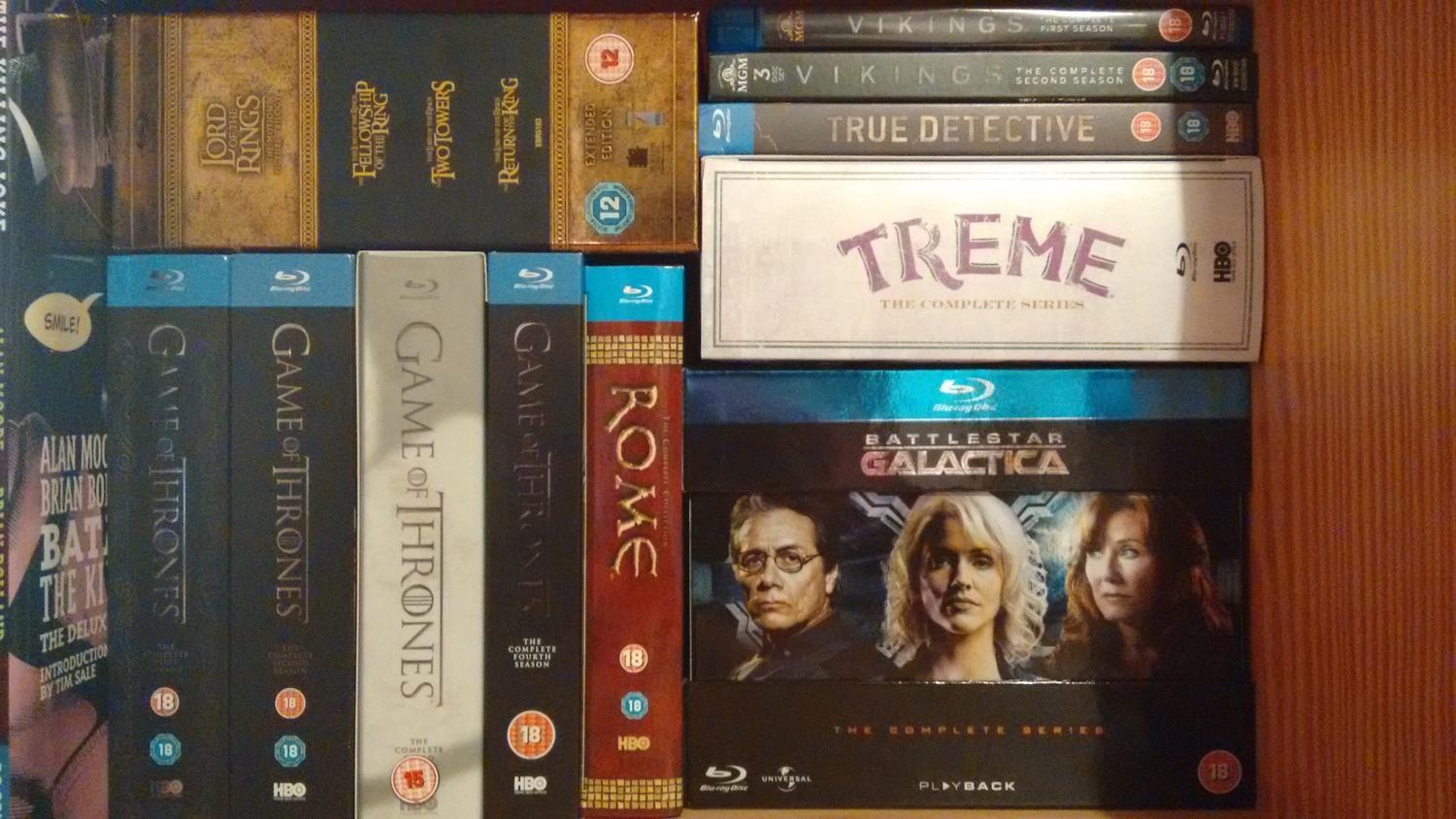 Onto the packaging. Firstly we have the outer sleeve, as usual. There’s also an inner sleeve on which “Valar Morghulis” is printed on the front, and an image of the Iron Throne on the back. Inside this is the usual fold-out case containing the discs and a few information slips. Thankfully, the entire package is black, rebirthing the trend broken by Season 3. Strangely, the packaging is slightly narrower than the previous seasons’. The difference is miniscule, but it was immediately noticeable to me. I’ve attached an image above so you can see for yourself how the spine stacks up against the previous box sets and other Blu-rays.

As a sidenote: what a marvellously-paced season. That only became apparent to me as I watched the whole ten episodes over the weekend. There was never a sense of having to “get an episode out of the way” in order to move on to the next, better one. Of course, there are certain scenes and aspects which we all have gripes with, but as a solid, ten-hour unit? Excellent stuff.

To conclude, I’ve collected a few tidbits of information from the audio commentaries which may be of interest to Watchers on the Wall regulars: