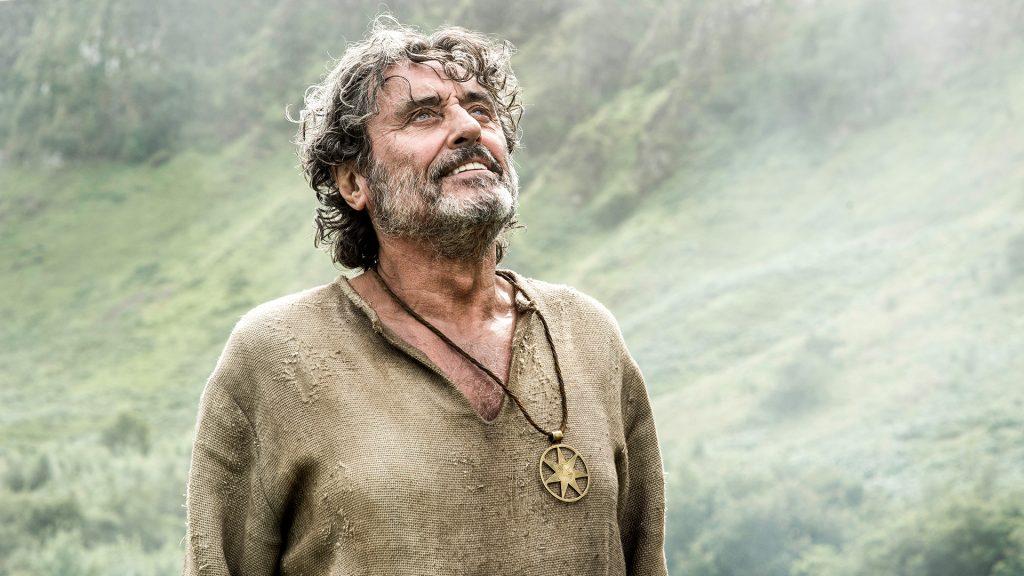 First up: Entertainment Weekly speaks to Ian McShane about his guest role on this week’s episode of Game of Thrones. In the piece (hilariously titled “Ian McShane breaks his silence on secret role” because McShane has been ever so silent about being on GoT), the star discusses his part as the peace-loving Brother Ray.

Major spoilers for “The Broken Man” below the cut!

“I think my main use was to re-introduce a character people thought was long gone and who needed some humanity,” McShane tells EW. “The Hound has not been shown much humanity in his life, and he gets a little from Brother Ray and carries that forward into his character, which makes it more interesting for those who watch him. Also, my daughter, who’s an avid watcher of the show, was like, “Oh, The Hound! That will be good!”

As for the publicity and fan hoopla surrounding the show, the actor says:

People are fascinated by it. Is Jon Snow going to come back? Is it going to be The Hound? [Fans are] involved in the world and then they work it out, which is great. It all about publicity, which is why I’m talking to you, isn’t it? … I did the DVD commentary the other day with [co-executive producer Bryan Cogman] and Natalie Dormer, who seemed lovely. It’s so protected, you walk into the room, and they say, “Can we take your phone?” The screen comes up and it’s watermarked and black and white. It’s like viewing the Navy’s war plan.

McShane has a lot to say at EW about GoT, the Deadwood movie, American Gods and more so check that at the source! 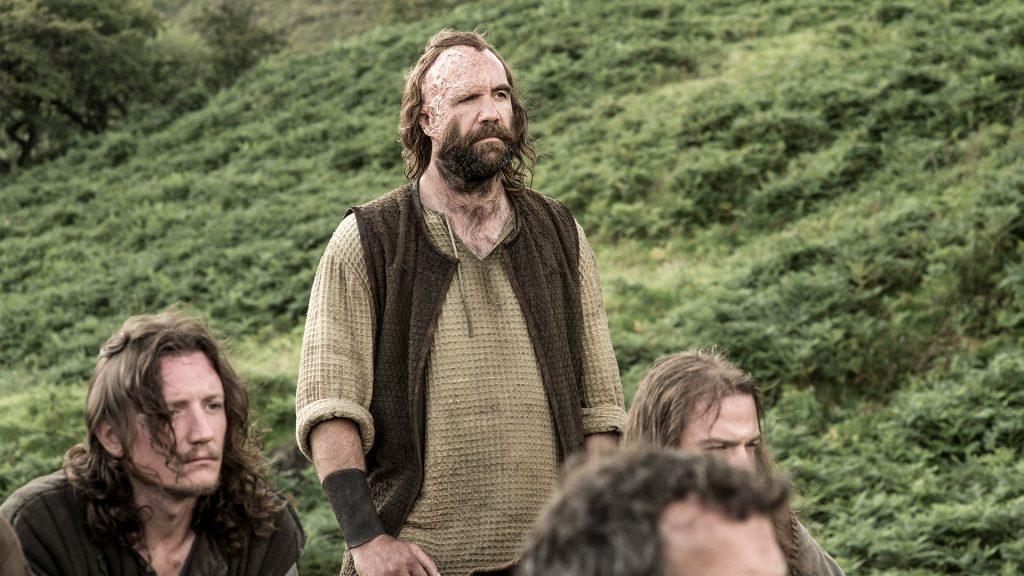 It was my favorite week on Game of Thrones because it’s a beautiful little three-act play. Very much on purpose it tonally doesn’t really feel like Game of Thrones until the end when everyone gets slaughtered. Ian McShane is a New Age ex-warrior with a painful history of violence, and he’s found his own flock trying to rebuild their lives. He sees Sandor as a candidate. He recognizes in Sandor a bit of himself. The Hound, apart from being grateful, starts to open up to him. He’s the first and only friend he’s ever had in his life. And that was an interesting relationship to explore. The scenes have a light touch and gentleness and humanity and humor that you don’t find on the show – then the raiders ride in. The Hound is few miles away chopping wood and they come back and slaughter everybody, pushing him back into the cycle of violence.

Cogman does mention that missing “Broken Man” speech from the books some of us were missing, along with his discussion of the creation of McShane’s character:

[The character of Ray] is a combination of a couple characters in the books – with additional characteristics we added. One of those characters gives a speech in the fourth book referred to as “The Broken Man” speech by A Song of Ice and Fire fans. The speech itself didn’t make it into the episode, but it inspired the character and some of his dialogue. So the title of the episode is a nod to that speech – kind of like when we called episode 205 “The Ghost of Harrenhal,” even though that term wasn’t spoken out loud in the show.

As for the episode’s cold open with the Hound, Cogman explains, “We figured it would make his reveal more impactful if the audience hadn’t seen [McCann’s] name in the opening credits first.” So it was simply a practical choice!

Gemma Whelan talks to MakingGameofThrones today about her work this season on the show. Of  Theon and Yara’s relationship, the actress says:

I think they’re still a little broken. There’s just enough light peeping through the cracks in their relationship to warrant a little hope for Yara, but she’s still far from trusting him after everything that’s happened. But that was a really nicely edited look the two of us shared at the kingsmoot: “Are you serious?” “Yeah, I’m serious.” “Are we doing this?” “Yeah, we’re doing this.”

Yara’s moment with Theon last night was “as close, sentimental and emotional the Ironborn get as family members,” she says. She explains:

She really believes he can overcome this trauma – she wouldn’t trust in a weakling or a fool. She knows she’s got a job on her hands to bring him back, but she wants to and she needs him because there’s nothing like a family ally. She wouldn’t risk everything if she didn’t deep down trust that he wasn’t going to come back and be true to his former self and to her again.

Another question clarifies an area of interest brought to light last night: her character’s sexuality. The interviewer, assuming Yara is gay, asks the actress if she knew about this:

Whelan says, “No, I had no idea! I reckon she’s any way. I don’t think she’d limit herself to one or another. Anything goes. Get the job done with whatever if fun and interesting.”

Check out the rest of the interview at MakingGameofThrones.com! 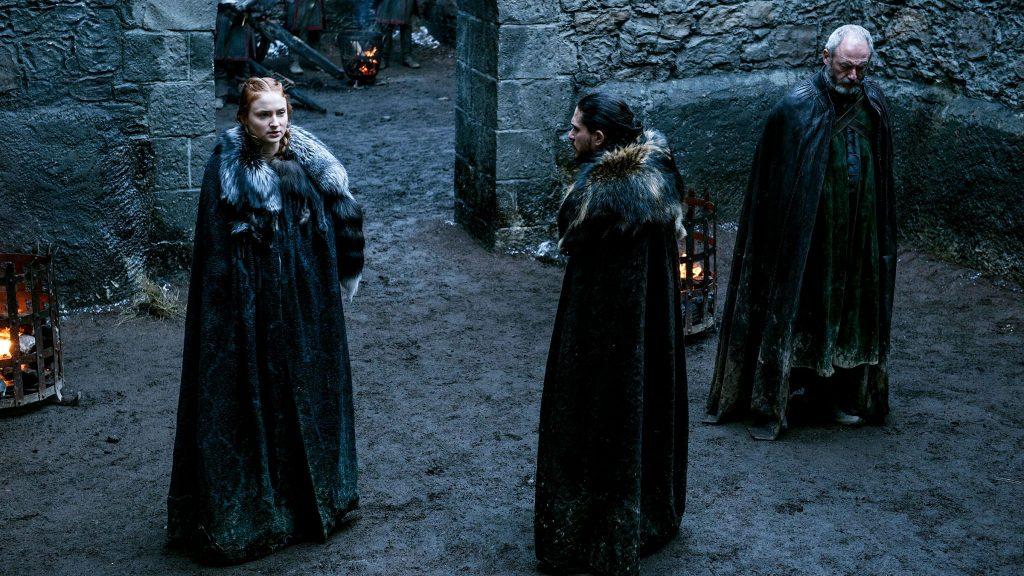 Sophie Turner also talks to MakingGameofThrones this week about playing the game and Sansa’s relationship with Jon Snow. The actress says:

It’s definitely fair to say that Sansa is learning how to “play the game.” She’s had a front seat in watching master manipulators and big players in the game and she’s been learning silently from them. But she’s certainly not done learning how to play just yet. It’s been a slow process. She never had the “Dany emerging from the flames” moment. It’s been more gradual.

Things between Jon and Sansa have been a little strained since their emotional reunion this season. Turner says, “It’s going to be a big adjustment for him to listen to her and view her as an equal, especially when it comes to war tactics, simply because she’s a woman.”

For those who are concerned Sansa may not be there for Jon, I wouldn’t worry too much. Turner explains more of Sansa’s perspective, saying, “None of them know what she’s been through or what she’s learnt. But at the end of the day, Sansa and Jon have each other’s backs.”

In this week’s “Inside the Episode,” David Benioff and D.B. Weiss discuss the Hound’s new life and direction, Jon’s speeches, meeting Lady Mormont, and Yara and Theon’s relationship.

Kristofer Hivju and Liam Cunningham share their insight into the tough job of selling the wildlings on fighting for the cause.