Game of Thrones Memory Lane 506: Unbowed, Unbent, Unbroken | Watchers on the Wall | A Game of Thrones Community for Breaking News, Casting, and Commentary 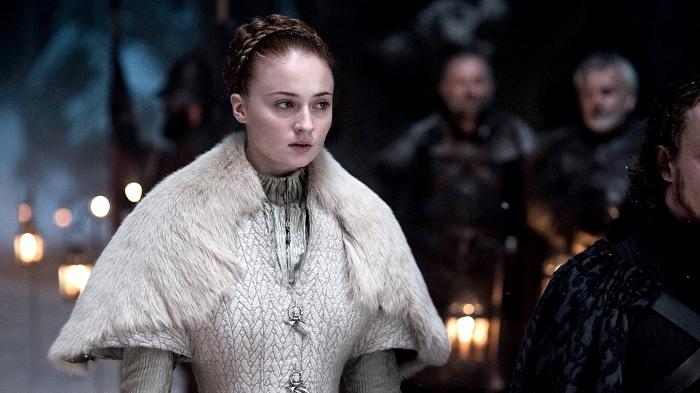 What is there left to say about a Game of Thrones episode that had everyone, from your neighbors to friends you never realized watch the show to a U.S. Senator, throwing in their two cents? There’s no need to rehash all the gory details of the controversy that followed “Unbowed, Unbent, Unbroken” when the debates still rage to this day, and no point in reminiscing about the shocked reactions on social media when we still have Axechucker’s Twitter recap of the episode handy for review.

Last May, the sixth episode of season five, “Unbowed, Unbent, Unbroken,” aired for the first time. Since then discussions of the episode have fixated on the closing scene, but it’s worth looking back today, for our Memory Lane, at all the scenes that structured this polarizing chapter of Game of Thrones. 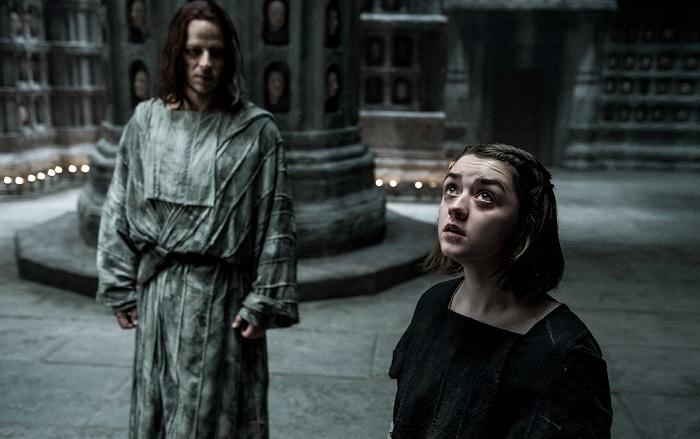 Though the later half of the episode focuses on Sansa, the first half of “Unbowed, Unbent, Unbroken” is largely centered around Arya’s next phase of training. It’s no accident either, I suspect. Both Stark sisters are entrenched in dark worlds, trying to find their way forward, and relying on dangerous mentors with unclear intentions.

Having earned her way into body-washing duties (a promotion in the eyes of the Faceless Men), Arya is learning reverence for death and the dead. Cleansing bodies, there is respect, and peaceful silence in the ritual. This is a significant change for Arya whose encounters with corpses up until now have mostly involved seeing dead bodies created as a side effect of vengeance and cruelty. It’s an extension of the lesson the Hound taught her about relieving the dying man’s agony in “Mockingbird;” she’s still learning that death can be a gift to people.

Part of her next stage of training is the Game of Faces, a very aggressive version of Two Truths and A Lie. She plays with the Waif, and later with a stick-wielding Jaqen who is similarly dissatisfied with her progress. In the game, Arya is forced to admit she doesn’t really hate the Hound.

Arya’s finally inspired to step up her lying game by another girl’s pain. Offering comfort to the dying girl Ghita, Arya crafts a beautiful lie and wins entrance deeper into the House of Black and White. For the first time, Arya -and we the audience- behold the eerie Hall of Faces, the overwhelmingly large library of human faces kept by the Faceless Men.

(Remember the sheer wonder of the Hall of Faces, before the season 6 marketing campaign beat the image to death with a stick?)

Jaqen wisely realizes Arya isn’t ready to become No One, but gives her a chance to become someone else- the next phase in Faceless training, as we’ll see. 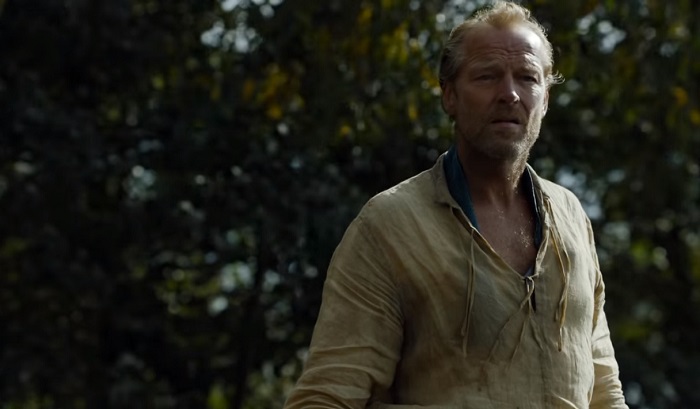 The Jorah and Tyrion Road Show is another highlight of “Unbowed, Unbent, Unbroken,” with Iain Glen turning in some of his finest moments using hardly any words.

The two men aren’t having a great trip so far, having lost their boat, been kidnapped (Tyrion) and contracted greyscale (Jorah). Tyrion has kept Jorah on his toes up until this point, annoying Mormont with his chattering, cutting observations and jokes. It’s in one of Tyrion’s frequent passing comments that Jorah is informed of his father’s death.

The array of expressions that flow over Iain Glen’s face in just a few moments, conveying Jorah’s shocked realization, his contained grief, his digesting of the information Tyrion offers, and finally the painful pushing aside of his emotions. It makes you wonder what Jorah has been thinking all these years- has he been hoping to see his father again someday, if he won a pardon? When did they last speak? It’s a beautifully filmed scene, and it’s a reminder that skillful dialogue can only take you so far. In the end, you need actors like Iain Glen.

After the devastating news is handled with a pragmatic The-Road-Show-Must-Go-On attitude, the men have a fantastic conversation about Daenerys and ruling. Tyrion brings up questions that fans have discussed many times. Sure, Daenerys has dragons, but why does that mean she’ll be a great queen? Why is she entitled to reign, simply because her father did? Why is anyone entitled to rule? Shouldn’t more people in the kingdoms be asking these questions? The dreamers and idealists of any cause need to be balanced out with practicality. Jorah used to be the more realistic of Dany’s advisors, but it seems that being exiled from her side has made his heart-eyes stronger and his common sense weaker. She needs Tyrion more than she knows.

And then the cock-merchant-talking slavers show up, and it all goes to hell. No wait- it works out fantastically, because thanks to Tyrion’s quick tongue, the men have a ship ride to Meereen. Tyrion is at his best when his survival is threatened; he fights for what’s his, as his father Tywin once said. I can’t imagine what Tyrion would fight for harder than his cock. I mean this is Tyrion, after all. 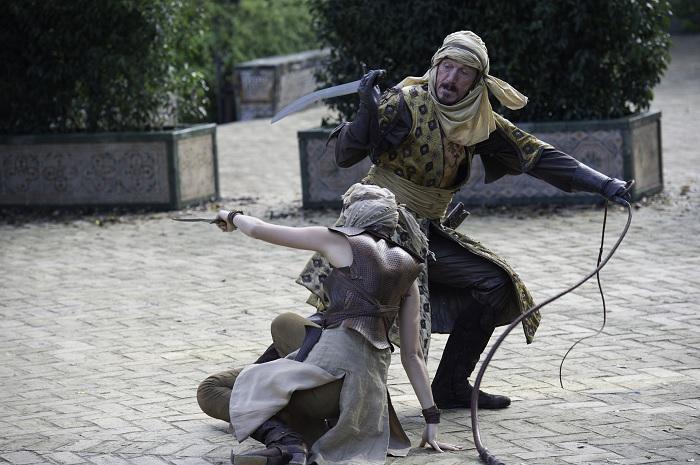 In terms of simple pleasures on Game of Thrones, nothing really beats Jerome Flynn belting out a tune. Bronn treats us to “The Dornishman’s Wife” as he and Jaime head off to smuggle Myrcella out of Dorne. And then we’re smacked over the head with the ridiculous beauty of the Alcaz- sorry, I mean the Water Gardens.

Myrcella isn’t keen on leaving Dorne, where Everything is Awesome and her boyfriend has pouty lips. The Sand Snakes make their move just when Jaime and Bronn do, and I’ll excuse that timing because Jaime and Bronn were seen coming into Dorne so everyone was pretty much waiting for them to show up, and eh, I’m being nice okay?

The Dorne segment of this episode was much maligned after it aired. Some of it justly, and I think some of the criticism was over the top. I will say that Ellaria’s plan is bad. I mean what is this plan? It makes no sense. Jaime’s isn’t much better, but then Jaime is a hothead. I don’t think Ellaria is a great strategist either. This is a demonstration of what happens when hotheads try to plan things.

The real crime is how underused Alexander Siddig is, in all of this. The perfect Doran Martell, only a minute of screen time.

My overall feeling about this scene in retrospect is that with tighter editing, it could’ve come across a lot better. 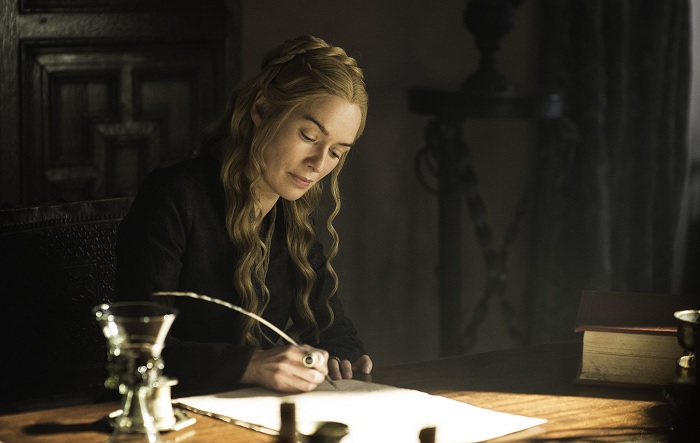 In King’s Landing, Littlefinger makes a major move in this episode. It’s always been unclear how much loyalty he feels toward Sansa, despite her being the daughter of Catelyn whom he supposedly loved. Heading back to the capital, Littlefinger meets with Cersei, and exposes the truth that Sansa is alive and set to marry Ramsay, the Bolton heir. Of course, he leaves out his role in the marriage.

But it’s a ploy, naturally. Cersei is steaming mad but on Baelish’s advice, agrees to let the Boltons and Stannis’s army have it out before acting, and let one of them take out the other. After that, Littlefinger’s Vale knights can swoop in and take over and he will become the Warden of the North.

Nice maneuver, Littlefinger. Very nice. I mean you’re a prick, but that was well done.

Another of Cersei’s meetings goes well- for her anyway. The Queen of Thorns is testy that her grandson Loras has been arrested for general gayness. It’s a sparkling duel of wits, but ultimately, and shockingly, Olenna Tyrell loses this round. The older woman is left shuffling out of the room, with Cersei still in control.

At the inquest for his charges, Loras denies any wrongdoing and his sister Margaery vouches for him. Unfortunately, his occasional bedmate Olyvar takes the stand. As many have pointed out, Olyvar was a squire in his first appearance on the show when he met Loras. It wouldn’t be strange for him to have seen Loras naked and to be able to identify a birthmark- but Loras flips out immediately, and it looks very bad. That guilty-seeming reaction is probably a factor, and also this is an inquest to determine if charges are going forward, not the full trial. He and Margaery are both taken into custody, pending the trial. 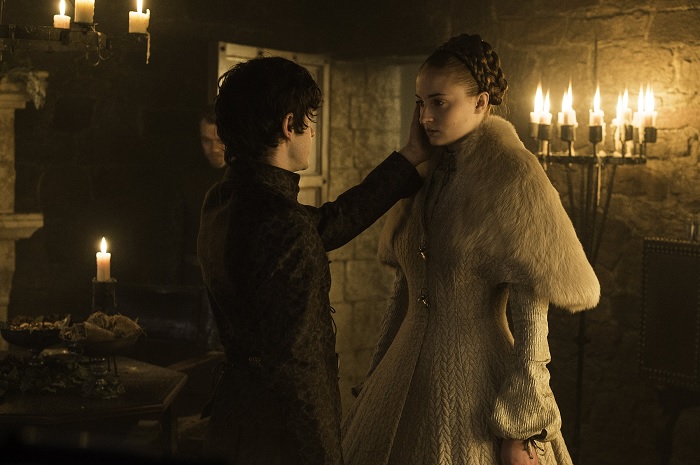 Sansa’s scenes toward the end of “Unbowed, Unbent, Unbroken” incited controversy, and as I said, I feel no need to rehash that; people have already made up their minds. But I think it’s worth acknowledging episode writer Bryan Cogman’s comments regarding the wedding night scene that explained how a few writing and directing choices were made.

The main reason we cut away at the end, frankly, is that this was Sophie’s first scene of this nature, and we didn’t want to show the attack. And so we cut to Theon to hear the attack. I understand why many people reacted to that, [thinking] we were making this scene about Theon and not Sansa. I’m sorry it was viewed that way. All I can say is it’s certainly not my intention when I wrote it or when we were producing it … We could have stayed on her face of the entirety of the attack, that would have been a perfectly valid choice. To me it was about being respectful to Sophie.

I appreciate the thought that went into the process of creating the scene. My own choice, were I the director or writer, would have been to have the camera finish on Turner’s face in close-up. That would have made the moment about her while still not showing the act of rape happening. But you know, I’m not the writer or the director. I’m the viewer. I can’t rewrite what happened, I can only interpret it and choose whether or not I want to factor in any input from directors or writers. I can watch an episode in its entirety and share my thoughts on it. That’s what I can do, as a fan.

There is no value in actively silencing the feelings and opinions of people who take issue with the depiction of rape in Game of Thrones or any other program. For fans who are at peace with the show’s depiction of sexual abuse or women, or both issues, they are also entitled to their opinions. For fans whose feelings lie somewhere in between, the same applies.

Ultimately, we all have our own take on these controversial moments. All we can do when confronted with art that incites a powerful reaction is share our thoughts with respect.

Stray Thoughts from My Actual Notes:

“Still not feeling Faye Marsay’s performance as the Waif”

“This is a shitty plan, Ellaria. Superbad.”

“I like seeing Trystane get punched. It feels right.”

“LF slightly less impressed by the Faith Militant than others. Bullies hold no power over him- he’s gotten that his whole life.”

“How can N. Ireland look so warm?”

The dying girl Ghita (Hattie Gotobed) will surprisingly resurface- her face will, anyway- in the season finale, when Arya goes to confront Meryn Trant.

Deaths: Ghita, who becomes the first face Arya wears from the Hall of Faces.

Beautiful Death: For the gift of death administered in the House of Black and White in this episode: 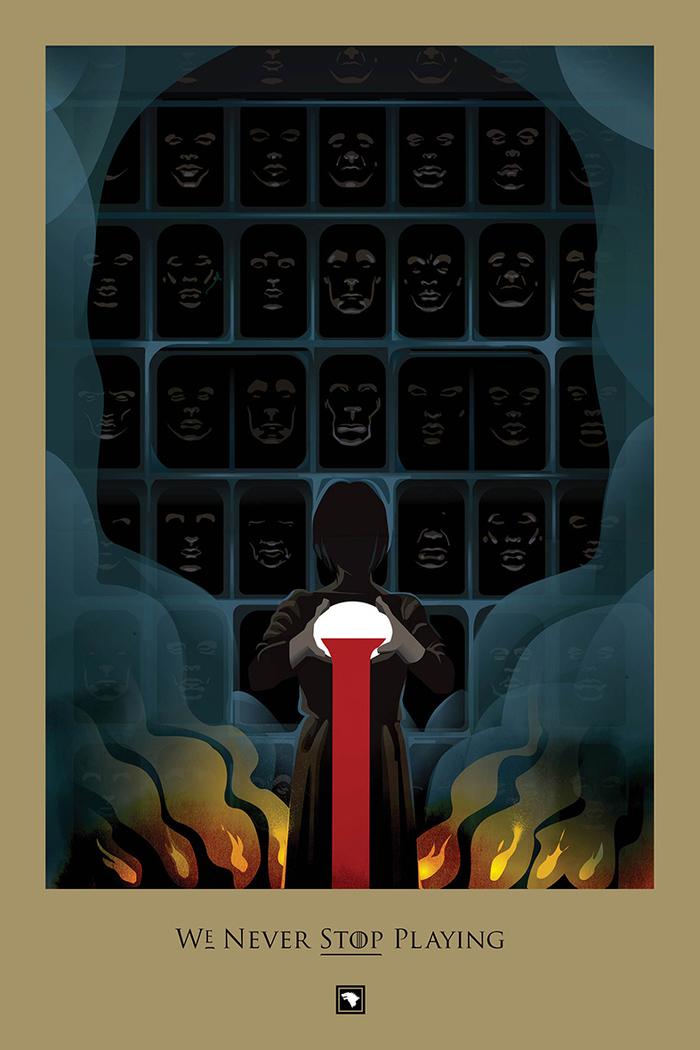