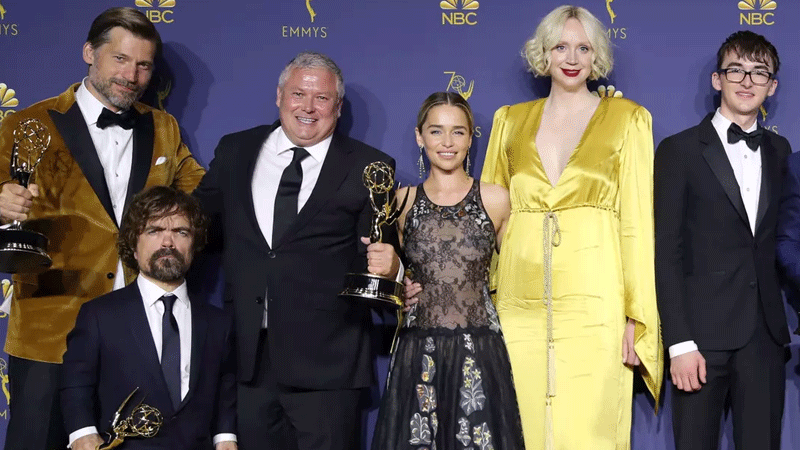 The annual Emmy Awards, honoring the best in television, have come and gone and left Game of Thrones with even more gold hardware to add to its display case — nine awards in all, including Outstanding Supporting Actor in a Drama Series for Peter Dinklage and the coveted Outstanding Drama Series prize (the fact that I can’t add Lena Heady to this list fills me with low-grade rage, but that’s just me). As with any awards show, a bevy of interviews took place before, during and after, and we’ve rounded up some of the best and most intriguing for your reading pleasure.

We start with a piece from Digital Spy that reveals that Dinklage had “concerns” about taking on the role of Tyrion before he met with showrunners David Benioff and Dan Weiss, because he wasn’t “familiar with the complexity of Tyrion at that point … unfortunately before this character, many times people my size weren’t complicated enough for me to be interested in doing it.” I imagine that tune changed pretty quickly, don’t you? Digital Spy also noted that during a separate backstage interview, Benioff acknowledged that Season 8 is “taking a really f**cking long time,” but not because anyone is “going on vacation or slacking off, it’s just that last season is far beyond what we’ve ever attempted before.”

As for the win for best Drama Series, which was — to put it nicely — unexpected by many viewers and industry commentators, don’t worry: the cast felt the same way, according to Vulture. Emilia Clarke said at HBO’s after-party that they were “very surprised,” but George R.R. Martin noted that even though he didn’t expect to win, “you can’t beat dragons.”

Speaking of Martin, the author was talkative on the red carpet and in backstage interviews, although he was predictably coy about the progress on the last two books in the Song of Ice and Fire series, telling US Weekly that the much-anticipated sixth and seventh novels will be done “when they’re done.” However, he reminded us, that with five prequels in various stages of development and two more books to come, “the world of Westeros is not wrapping up.”

Martin also gave a lengthy interview to Variety, saying that he believes the show could’ve gone for “11, 12, 13 seasons,” and that he was advocating for at least 10, but since Dave and Dan are “the ones actually working on it,” eight was the number of seasons eventually settled on. He again referenced the prequels that are in development — one of which, we reported recently, is slated to start filming relatively soon — and that some of them could take place “just 100 years before ‘Game of Thrones,’ some of them 5,000 years before ‘Game of Thrones.’ ” Just a hundred years before? Now, that is intriguing. What do you think that could be?