Game of Threads: The Spoils of War | Watchers on the Wall | A Game of Thrones Community for Breaking News, Casting, and Commentary 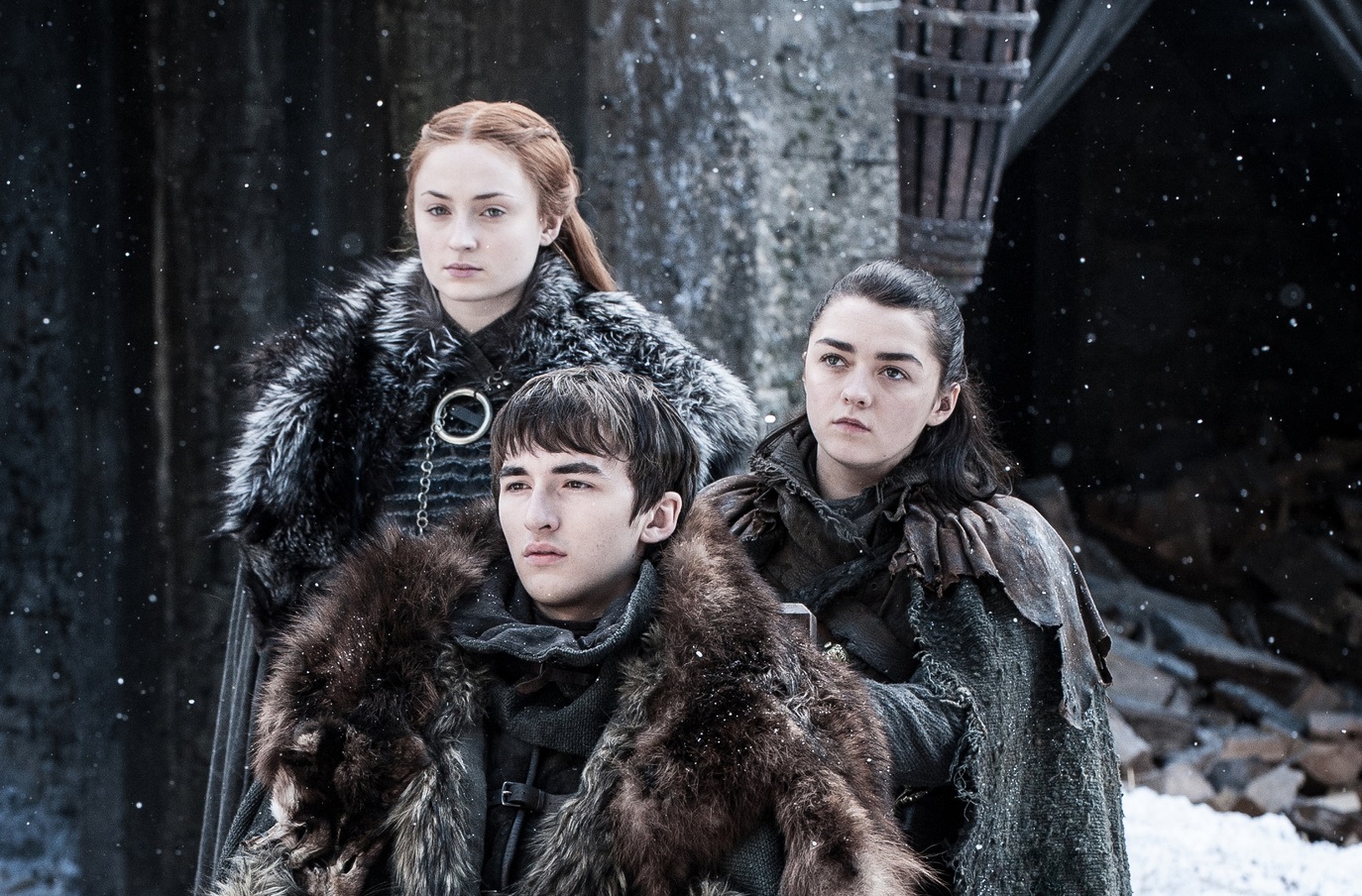 Episode 4 of Game of Thrones, while a pivotal point in moving the story forward, is steeped in sartorial parallels from the past.  A major theme that has been discussed for the past few costume analyses is the idea of the lead characters drawing on their experiences to create their present, fully evolved look, but it becomes all the more clear when they come face to face with a piece of the past that has molded them. 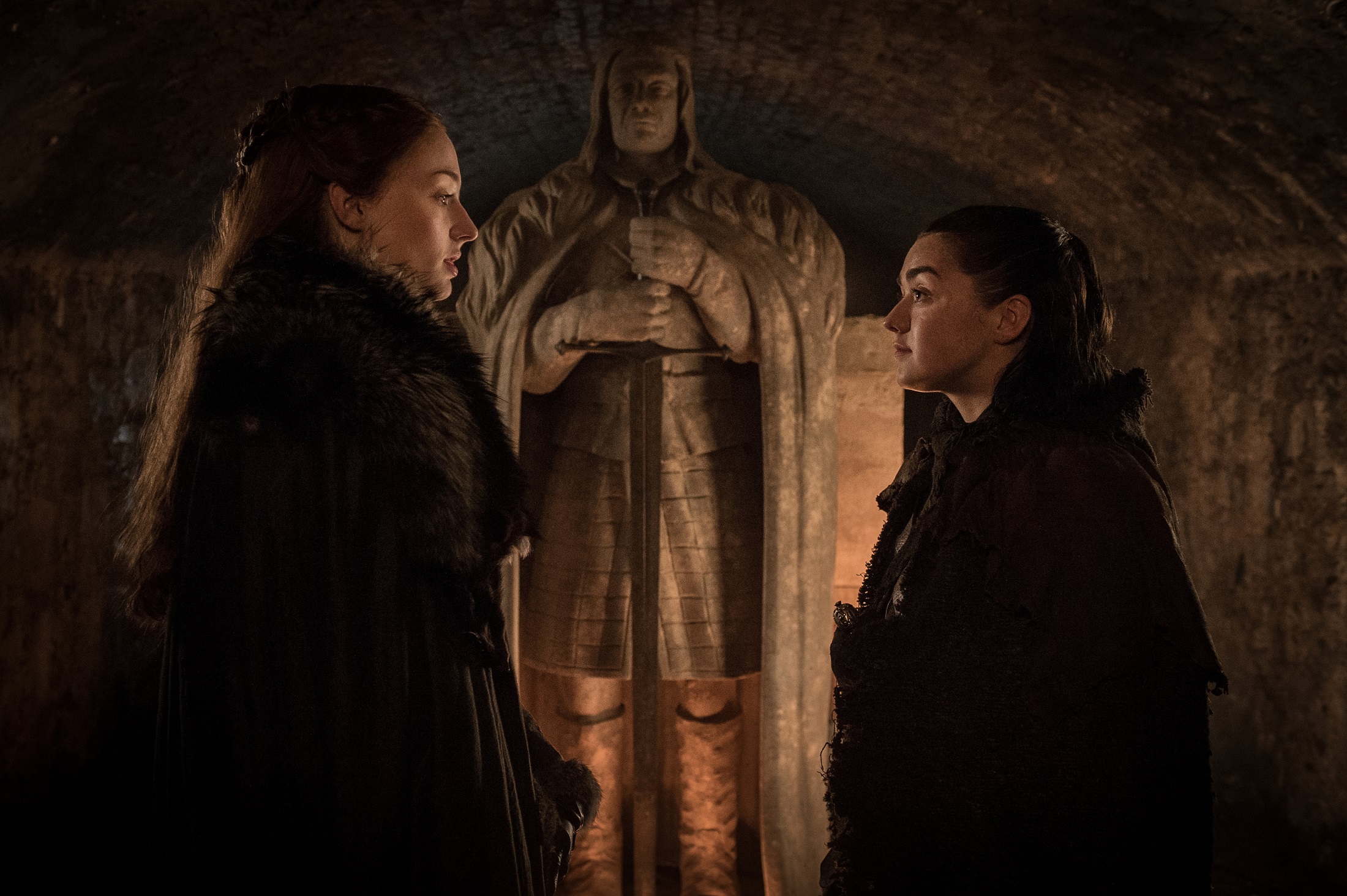 When Arya arrives at Winterfell, she is still wearing the looted Frey sacks and cloaks, but when she and Sansa reunite in the crypt, it brings to mind the differences in their dress in Season 1 when they first came to King’s Landing.  Sansa was a lady in training, and now she is the acting Lady of Winterfell.  Arya preferred to train with a sword and wanted more than a life of gowns and courtly affairs.  Now she is a great assassin.  They have both changed so much and yet not at all, and their clothing reflects their childhood goals that were put through the ringer in order to be achieved. 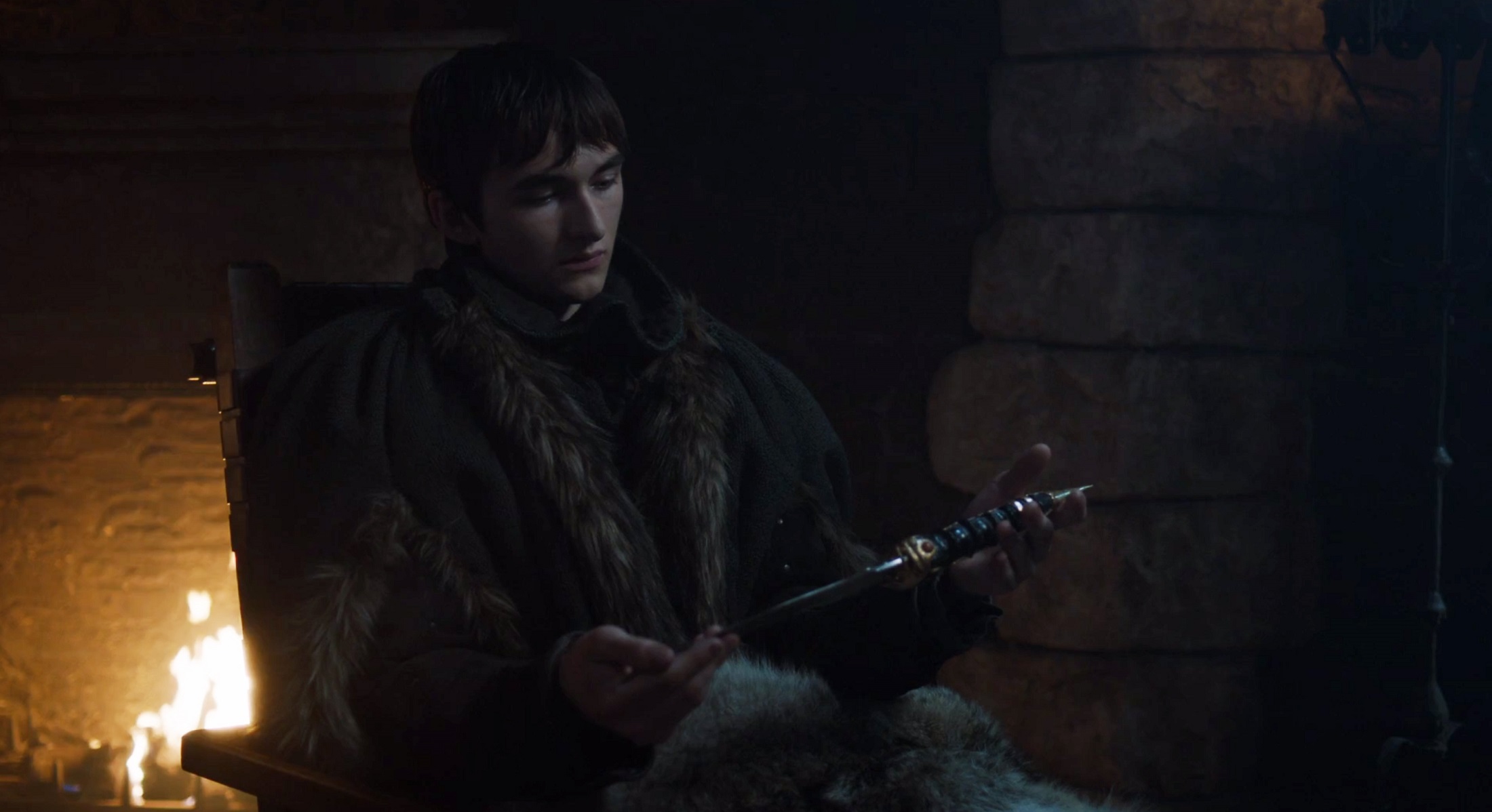 Bran also calls to mind Maester Luwin in his new robe, another Season 1 theme coming full circle.  His childhood dreams of becoming a great knight were dashed, and he didn’t want to accept education in place of glory, but he is now the keeper of all the world’s stories- the ultimate Maester.  Still, there is a lofty element to the shape of the shoulders that Michelle Clapton has mentioned in the past as being a signature of the Stark look (the Northern fur cloaks, Sansa’s Season 5 wedding dress, etc…), so whoever made this for him, possibly even Sansa, is hoping he can remember and retain some of his former self. 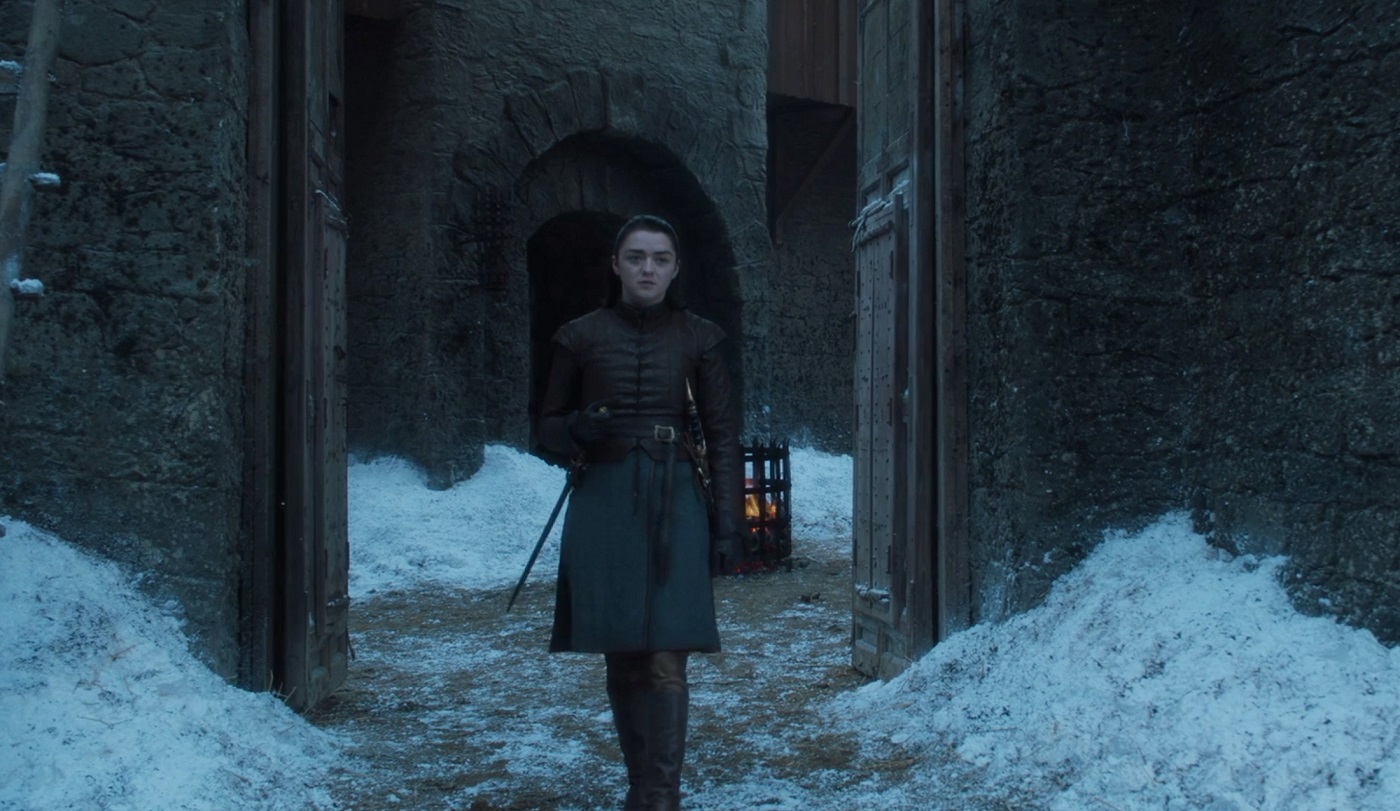 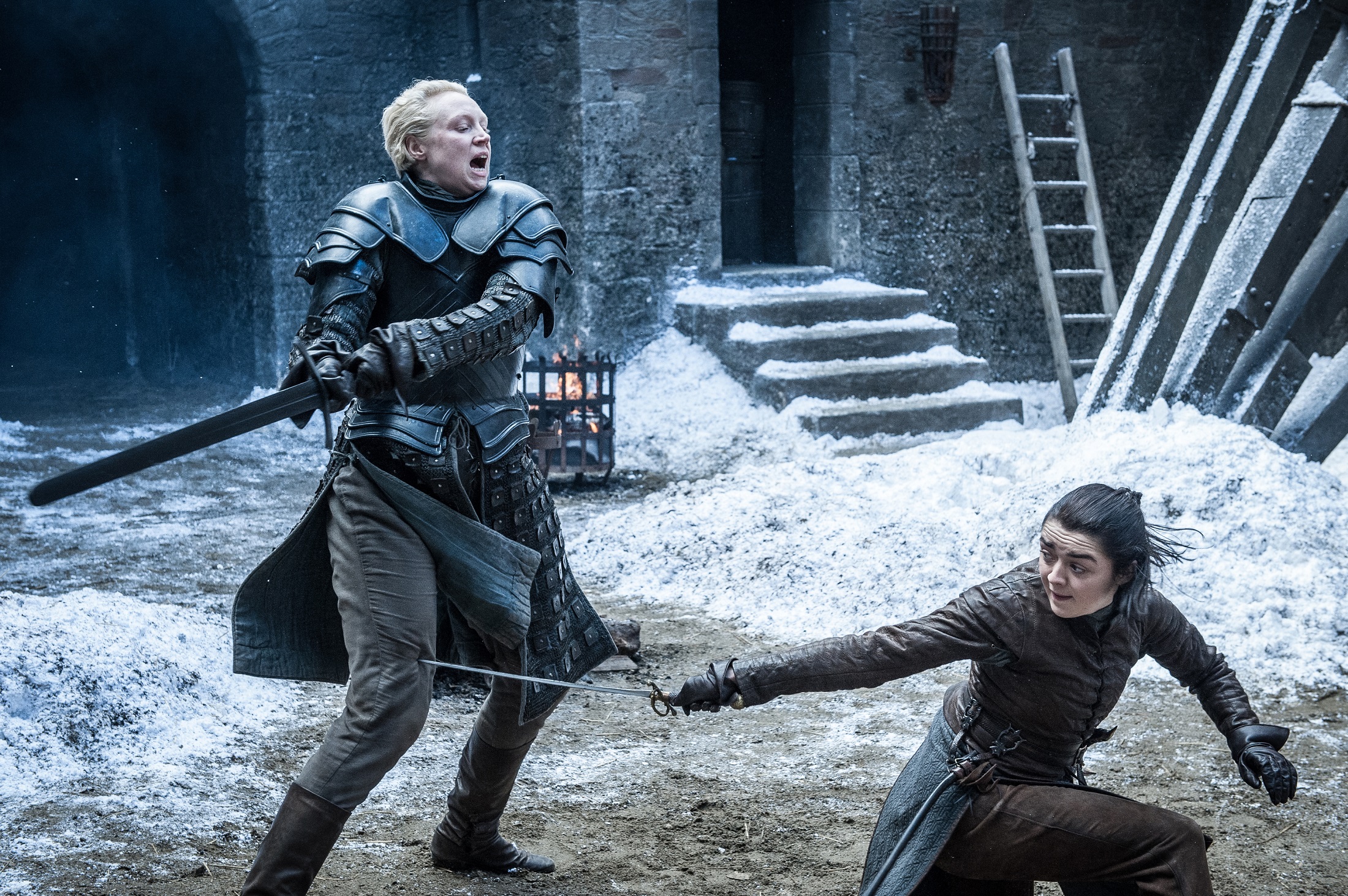 Arya also echoes someone else’s past when she spars with Brienne.  The doublet and leather skirt she wears is undoubtedly something that Brienne would have worn while growing up, and is a variation on the out-of-armor outfits Brienne wears in Season 4 over the course of Joffrey and Margaery’s engagement and wedding, as well as what she appears to be wearing under her furs earlier in the episode.  There is a kindred spirit there and I imagine Arya might someday emulate her further when she gets her own armor. 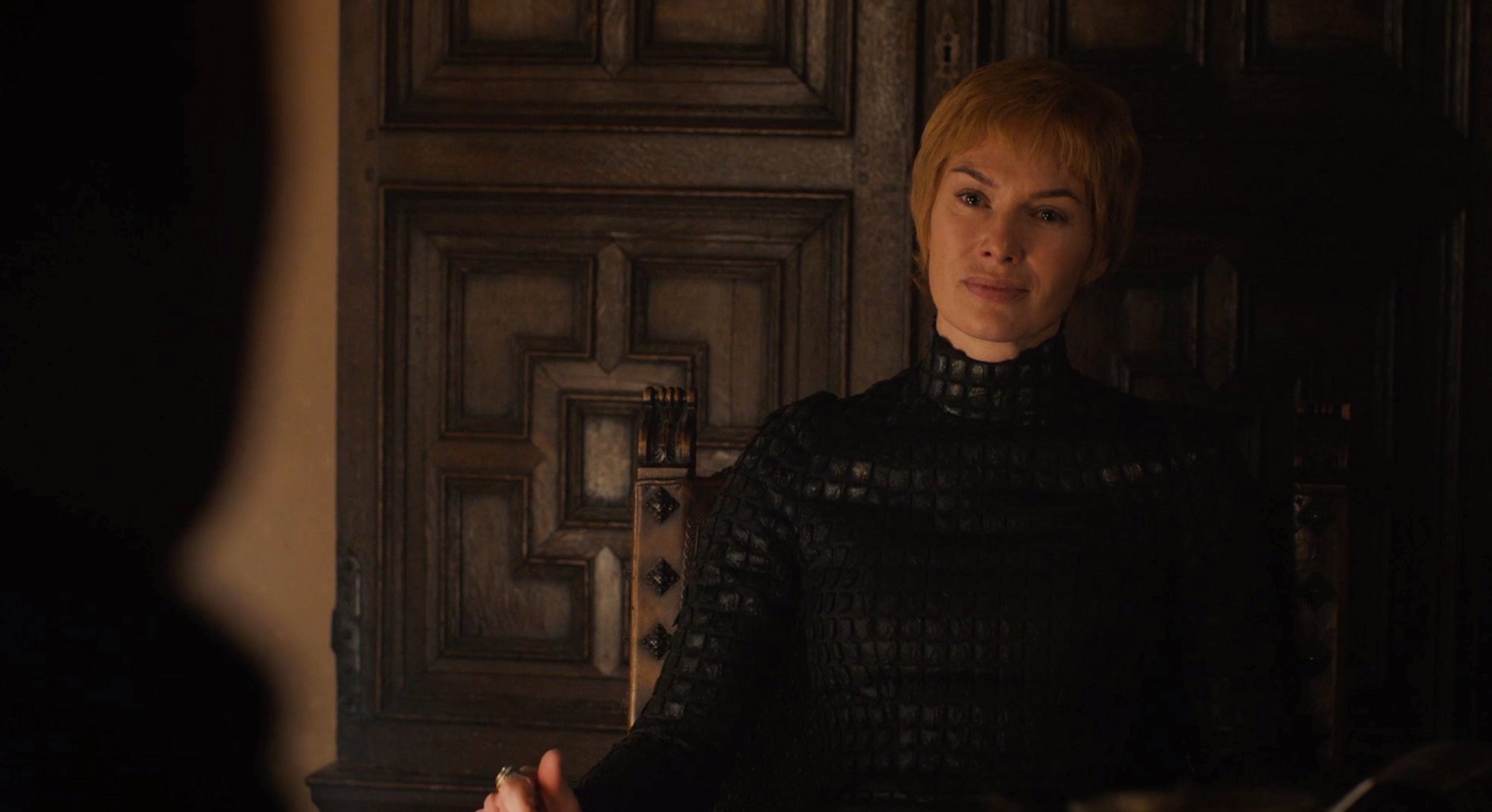 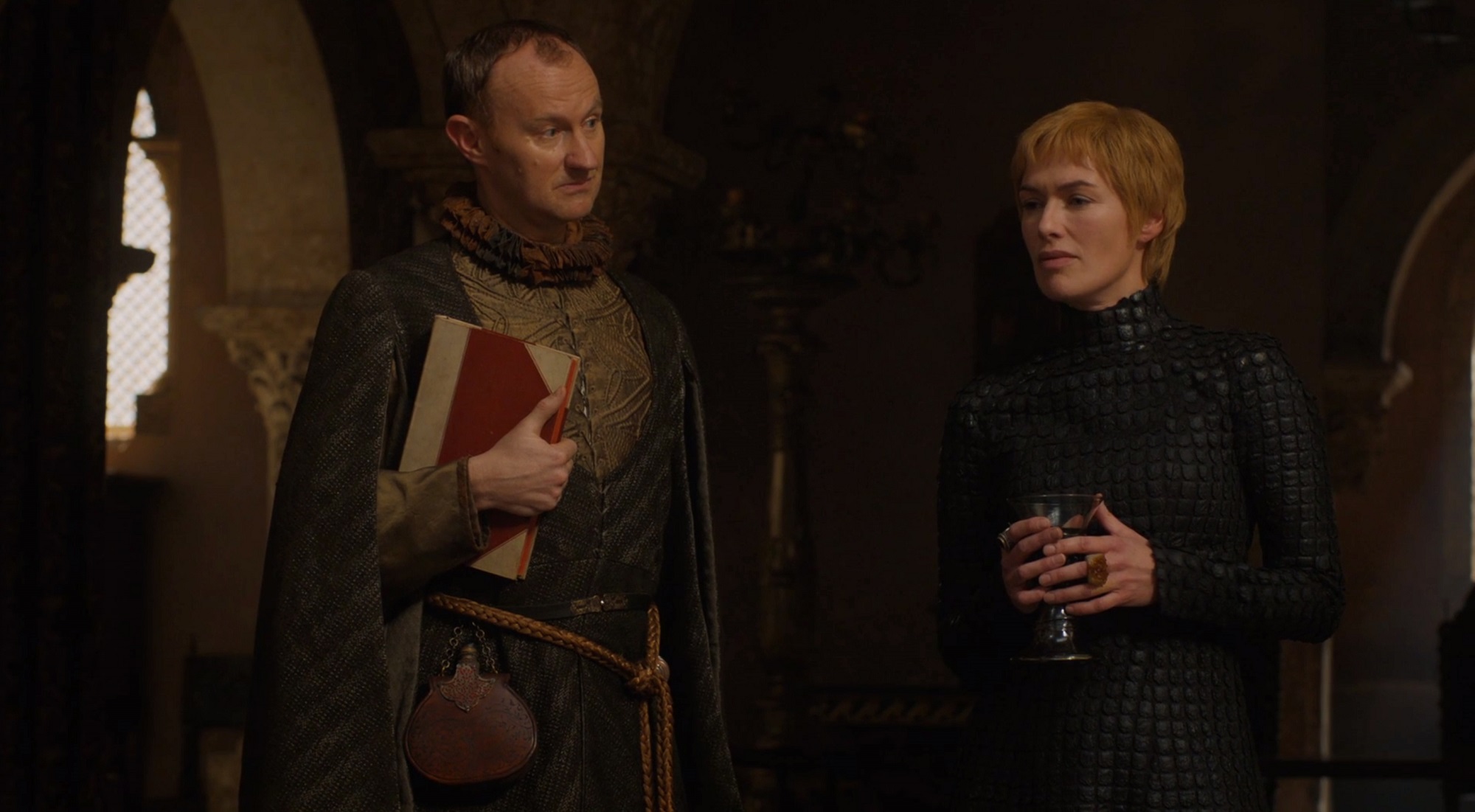 But Arya isn’t the only one emulating Brienne.  Cersei‘s gown is a direct take on the arming doublets that the great fighters of Westeros wear beneath their steel plate.  The square leather pattern is unmistakeable, and suits her as she speaks of war tactics and her spread of power.  Cersei’s square motif can also be seen stitched on Arya’s training vest- two women that are armed and out for blood, furthering the notion of Cersei’s influence not only on Sansa, but on Arya too.  Interestingly, the gown also has a reptilian, scaled element to it, perhaps as an offense to Daenerys, and perhaps as an unknowing evocation of the Mad King, himself. 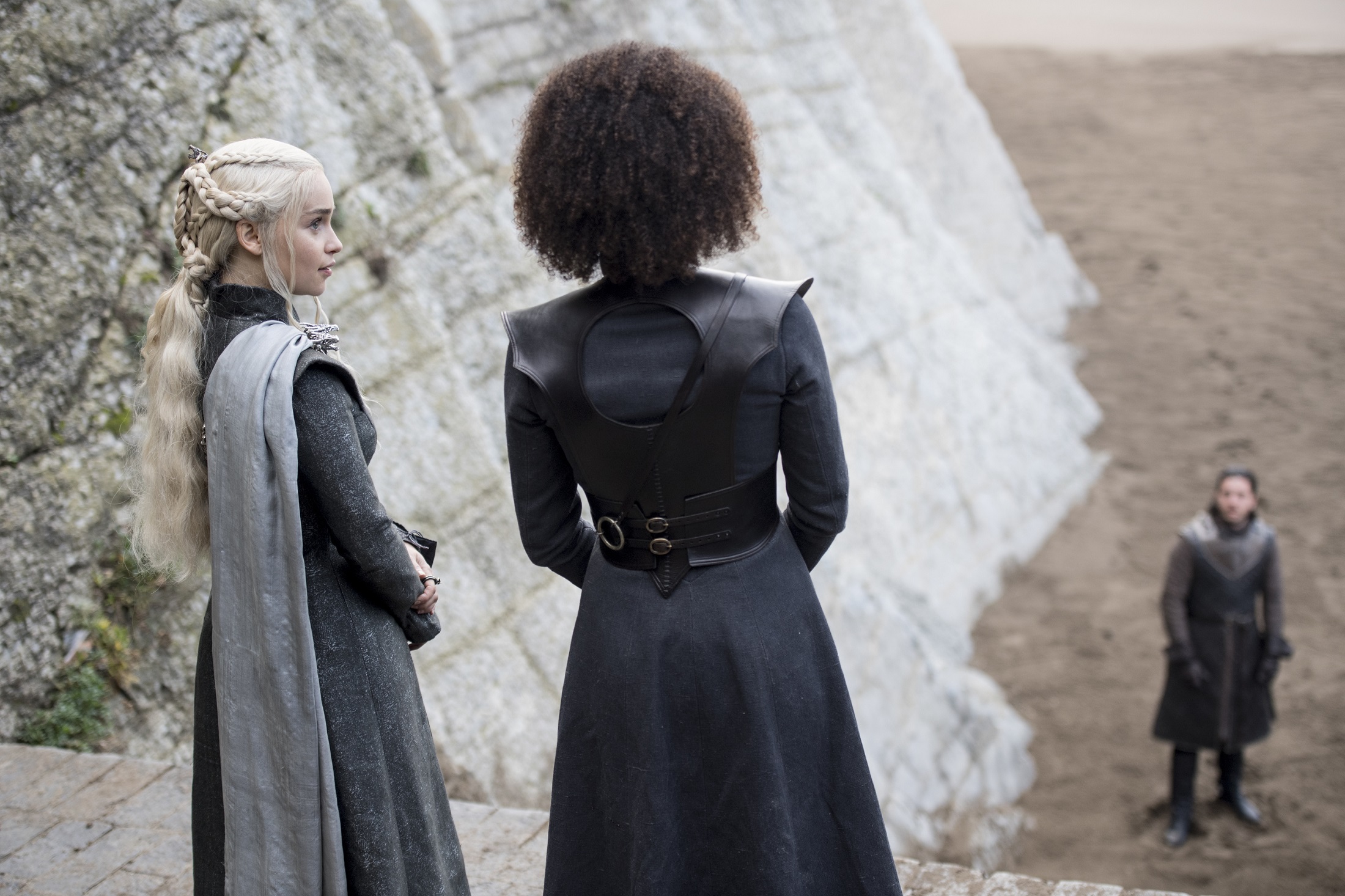 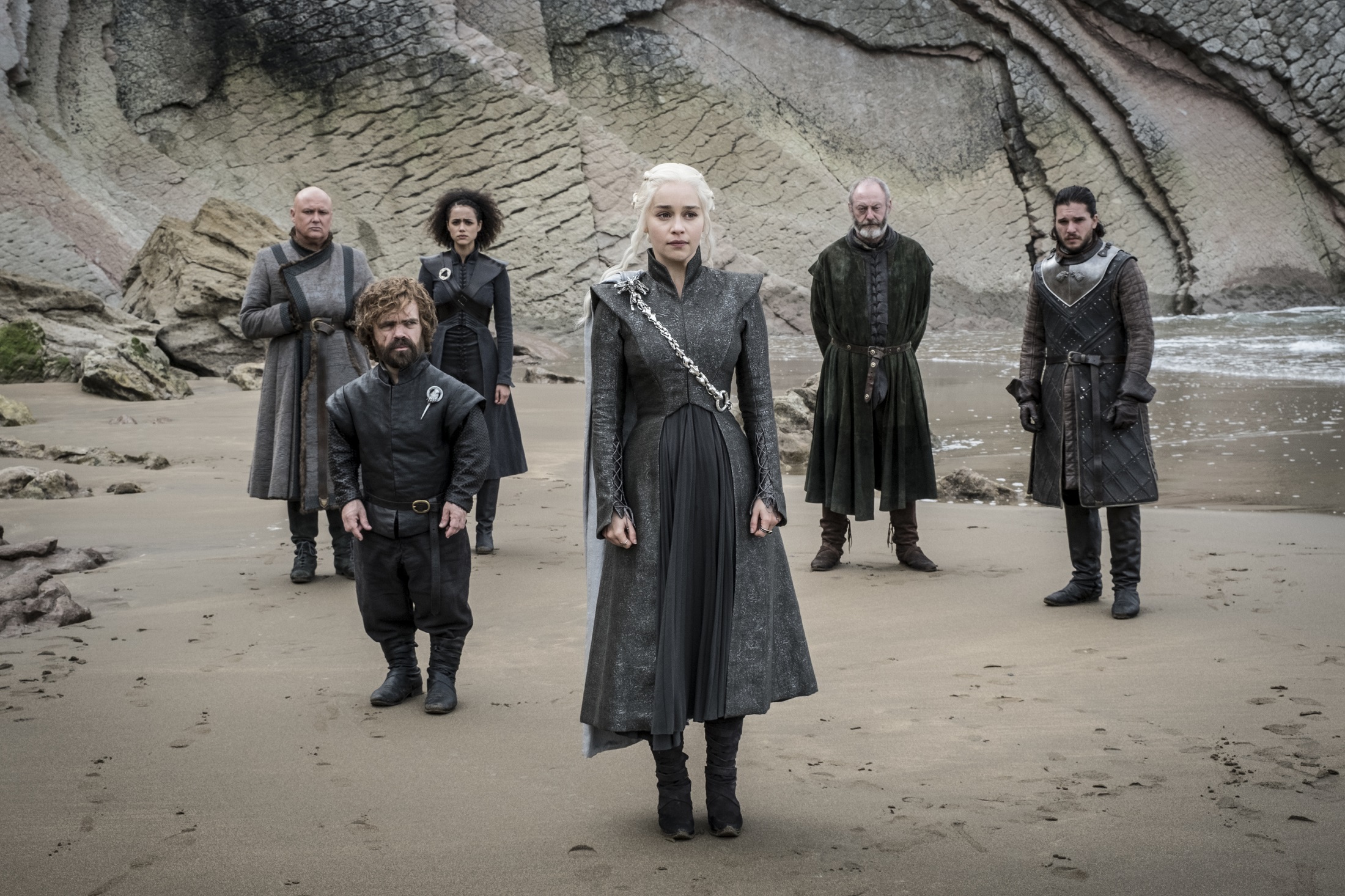 Over in Dragonstone, Daenerys and Missandei meet with Jon and head into the caves.  I’m not certain if we’ve seen a clear shot of Missandei’s leather armor from the back, but the circular back cutout is the same cutout from Dany’s blue gowns when she first took Meereen.  Dany is still wearing her toned-down ensemble from the last episode when she agreed to let Jon mine the dragonglass.  Additionally, the cape that is draped over her shoulder is now a blue-grey, instead of the imposing scaled Targaryen-red, signaling her softening towards the Northerner, but her royal chain and pin remains.  At this point, the chain almost serves as a personal reminder to her of how far she’s come, instead of an intimidation tactic. 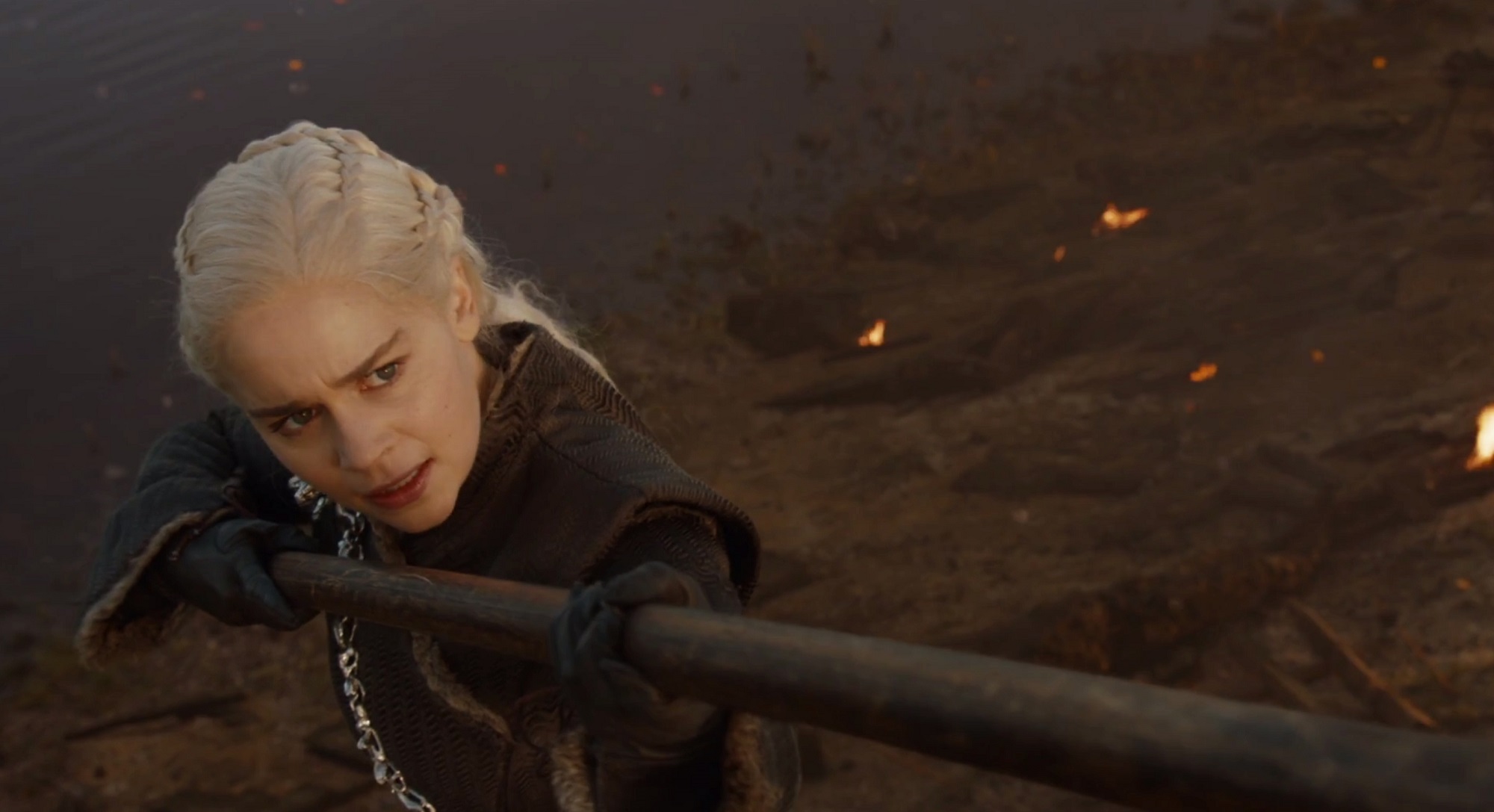 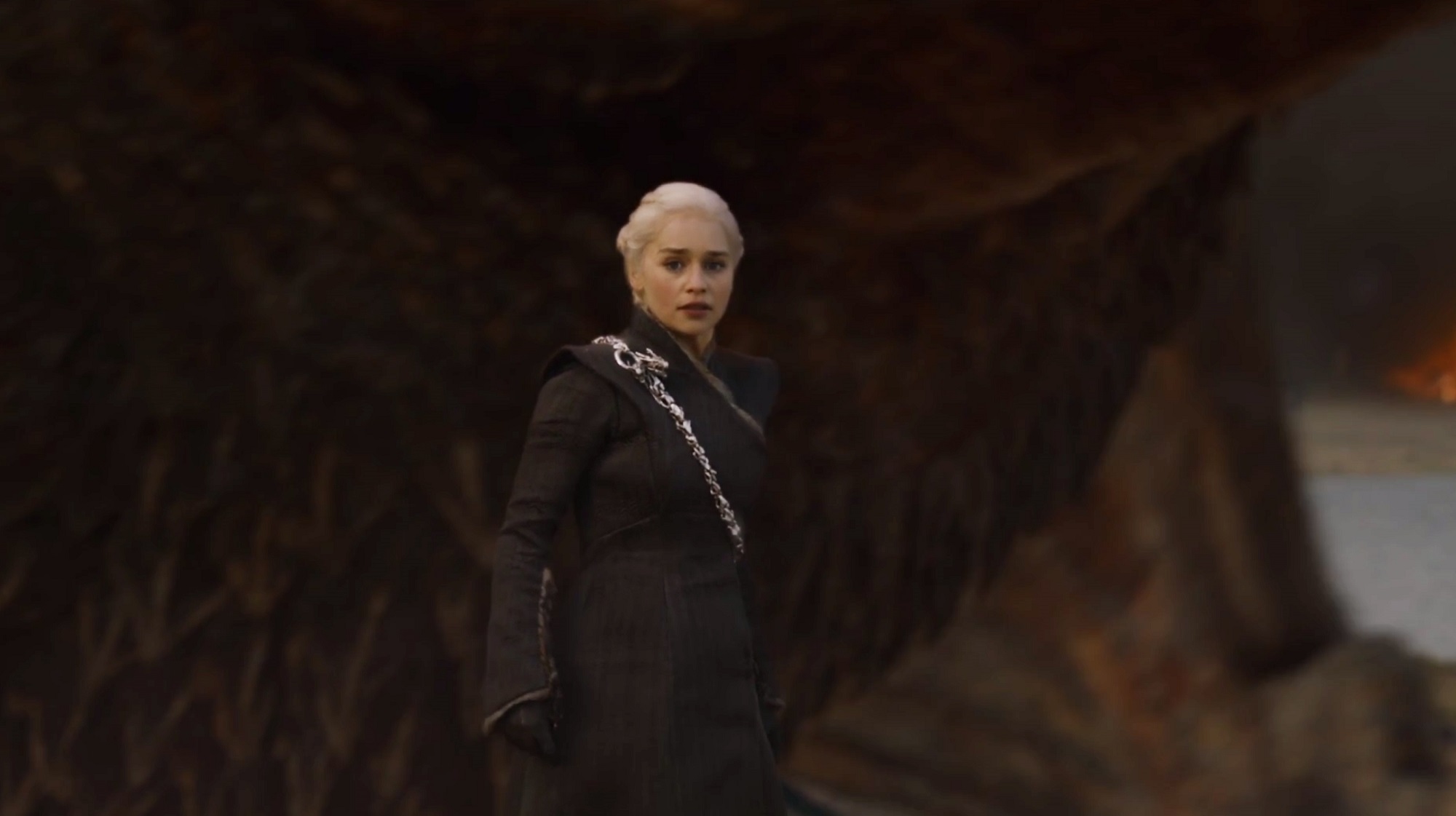 Finally as Dany rides into The Reach, her battle garments, while a similar silhouette to her now-signature look, are lined in fur.  An interesting choice considering The Reach is probably still a lot warmer than Dragonstone, plus she’s about to lay siege with fire, making it even warmer.  Obviously she is immune to the fire’s heat, but unless the fur is providing more protection from weapons aimed at her, I don’t quite understand the reasoning, unless it’s a subtle hint that she’s now supporting the Northern cause, in addition to her claiming the throne.  It is also quite similar to Varys’ new asymmetrical Targaryen fur coats. 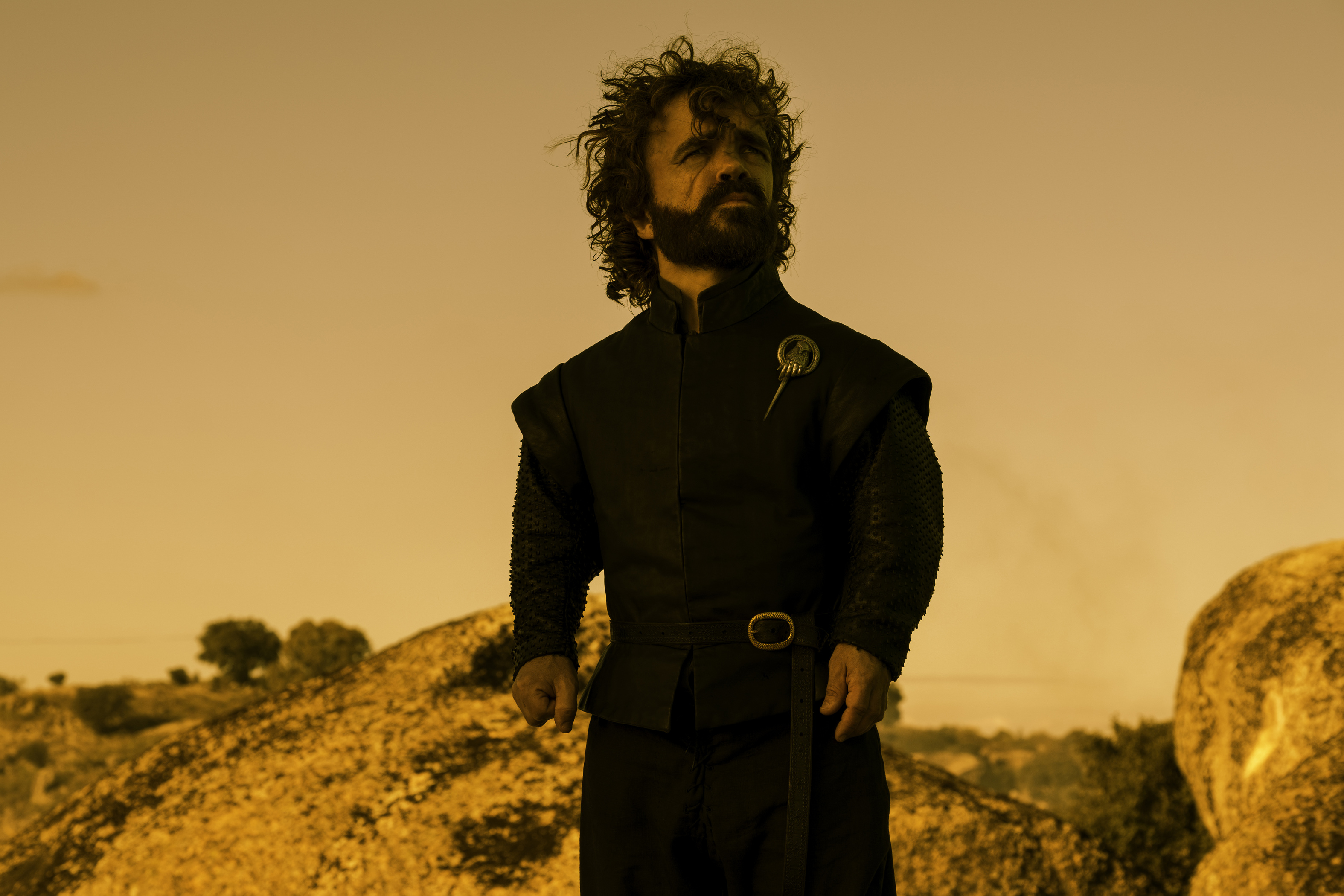 Tyrion is wearing his “Tywin” costume while he looks over the massacre of the Lannister soldiers, and mentally pleads for Jaime to retreat before it’s too late. 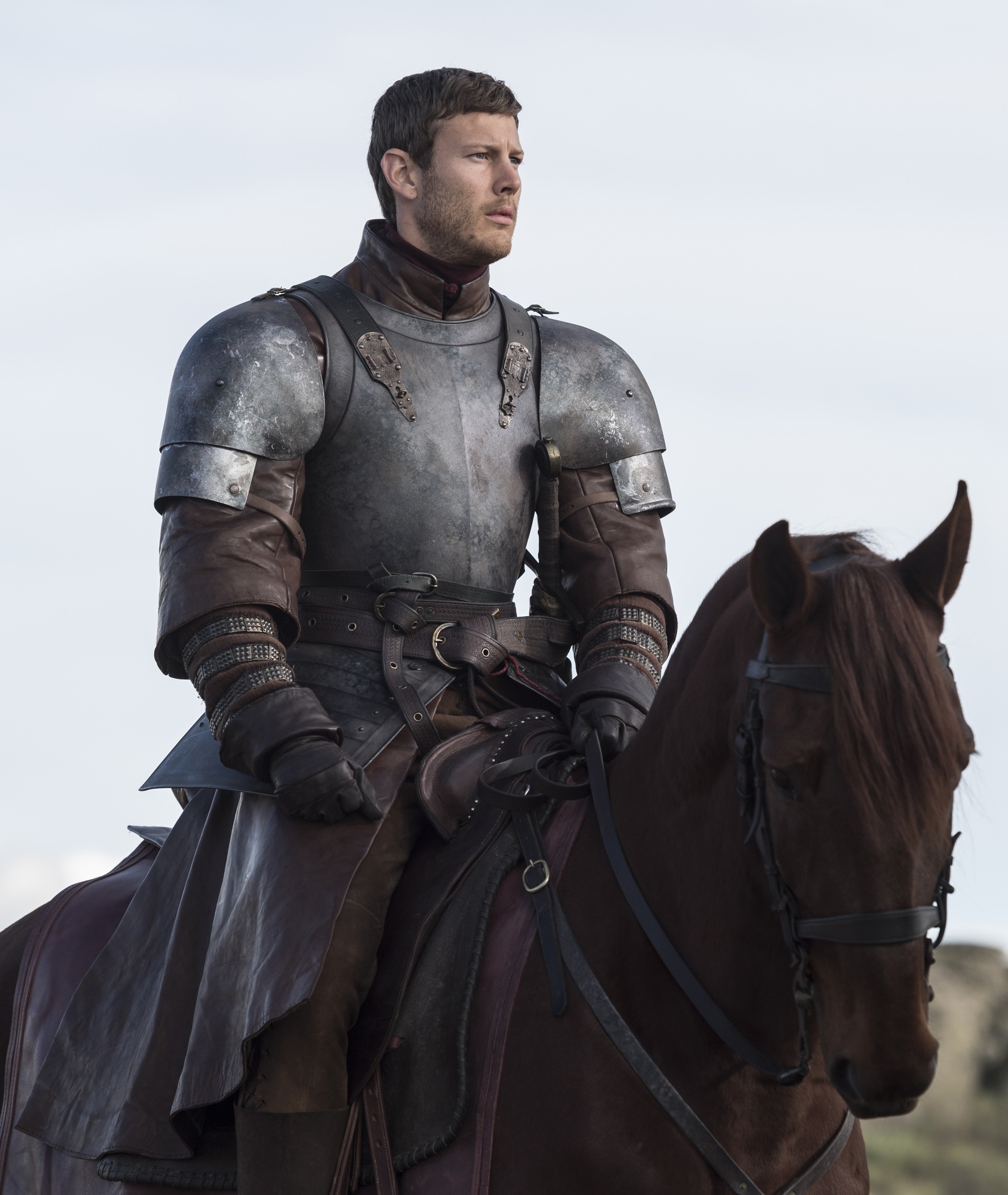 Dickon Tarly‘s armor is quite tarnished and beat up, considering the sacking of Highgarden was his first battle.  It would make sense, though, that Randyll would have no desire to create new and fanciful armor for his son.  He probably inherited the steel from an older family member. 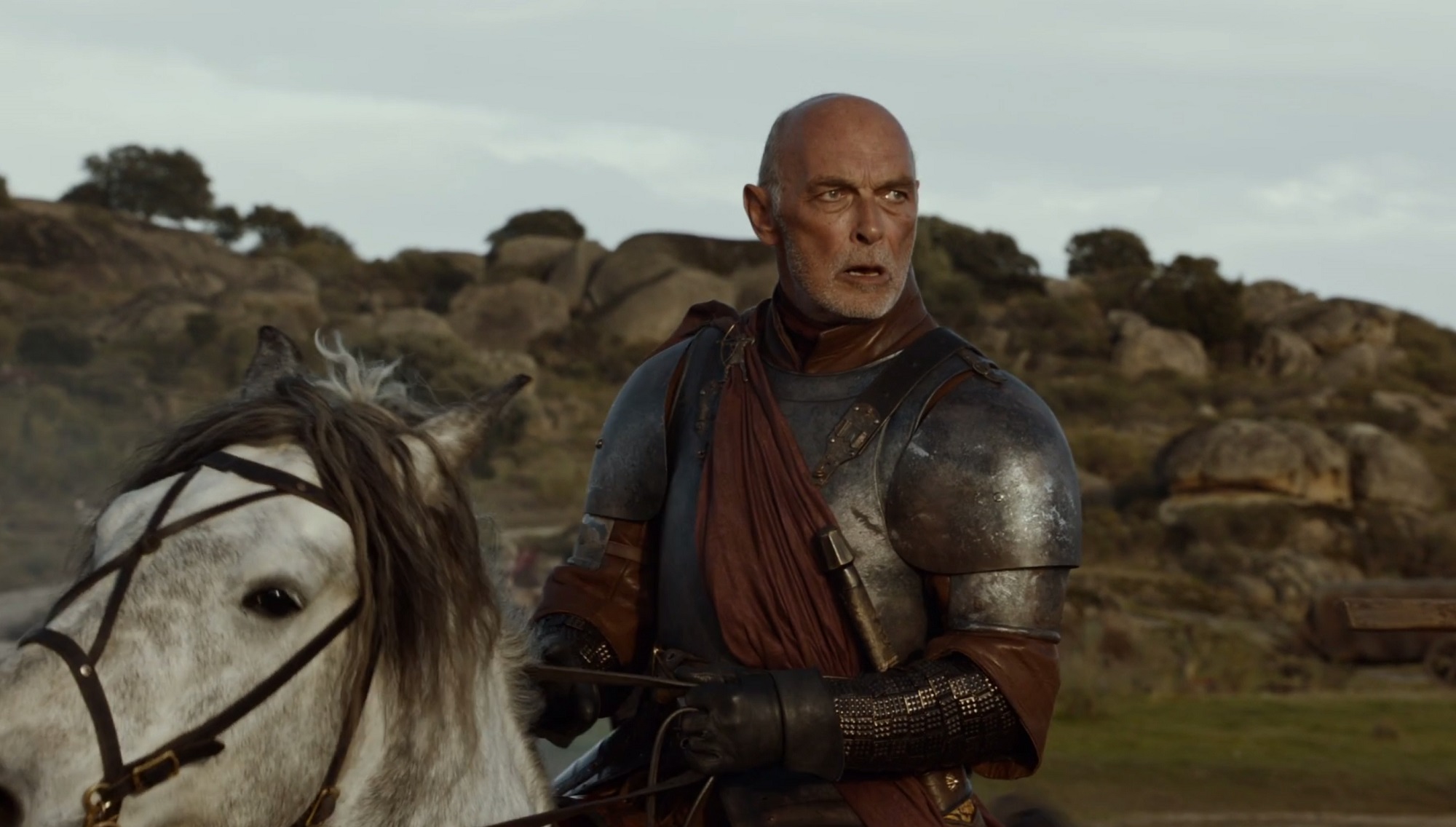 Furthering the idea of Randyll being a military man, it’s amusing to see the Tarly armor next to the decorated Lannister plates, let alone imagine what they must have looked like next their former lords, the Tyrells. 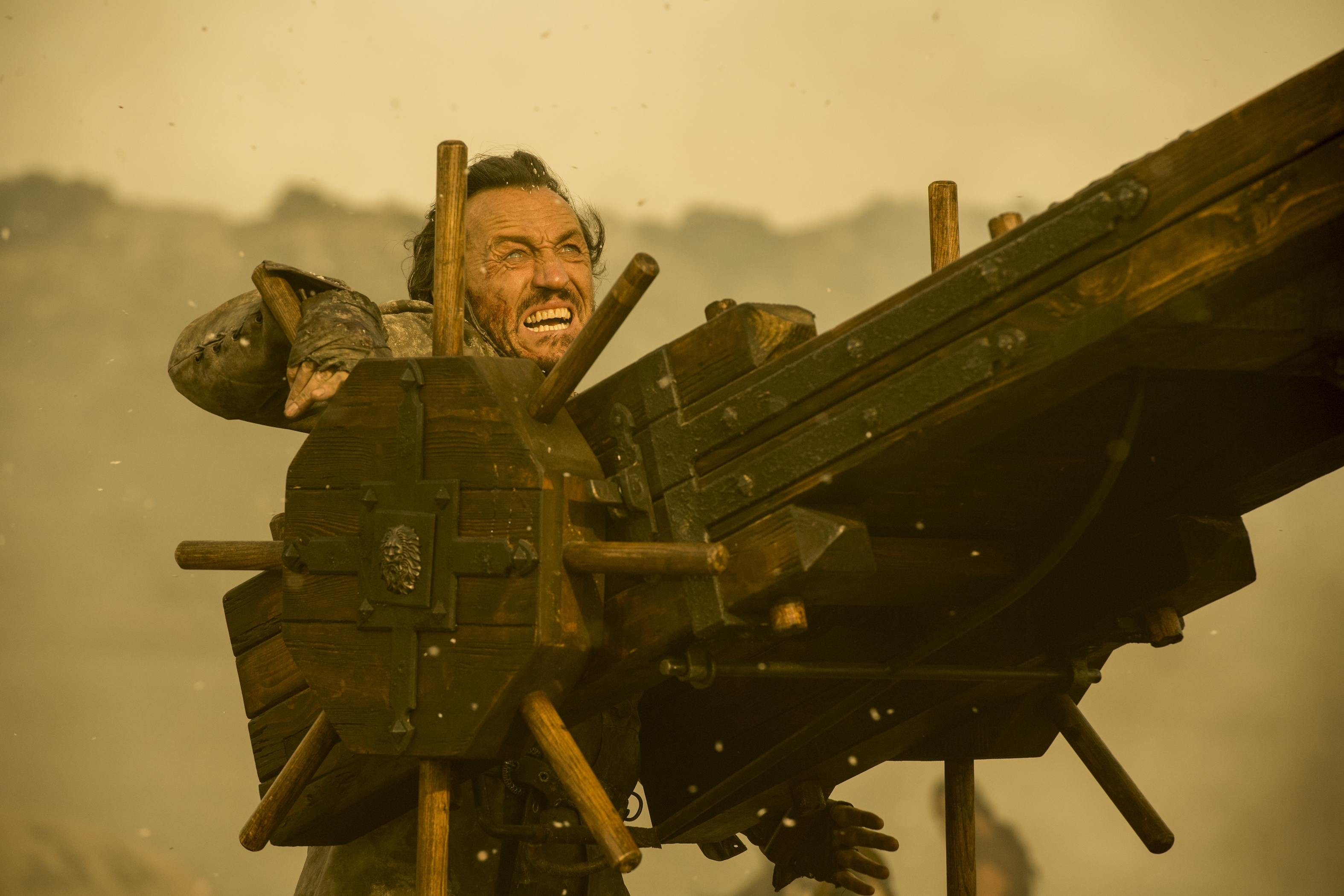 Always the badass, Bronn has no need for armor.  Ever.