Game of Threads: A Lady's Armor - Sansa Stark | Watchers on the Wall | A Game of Thrones Community for Breaking News, Casting, and Commentary 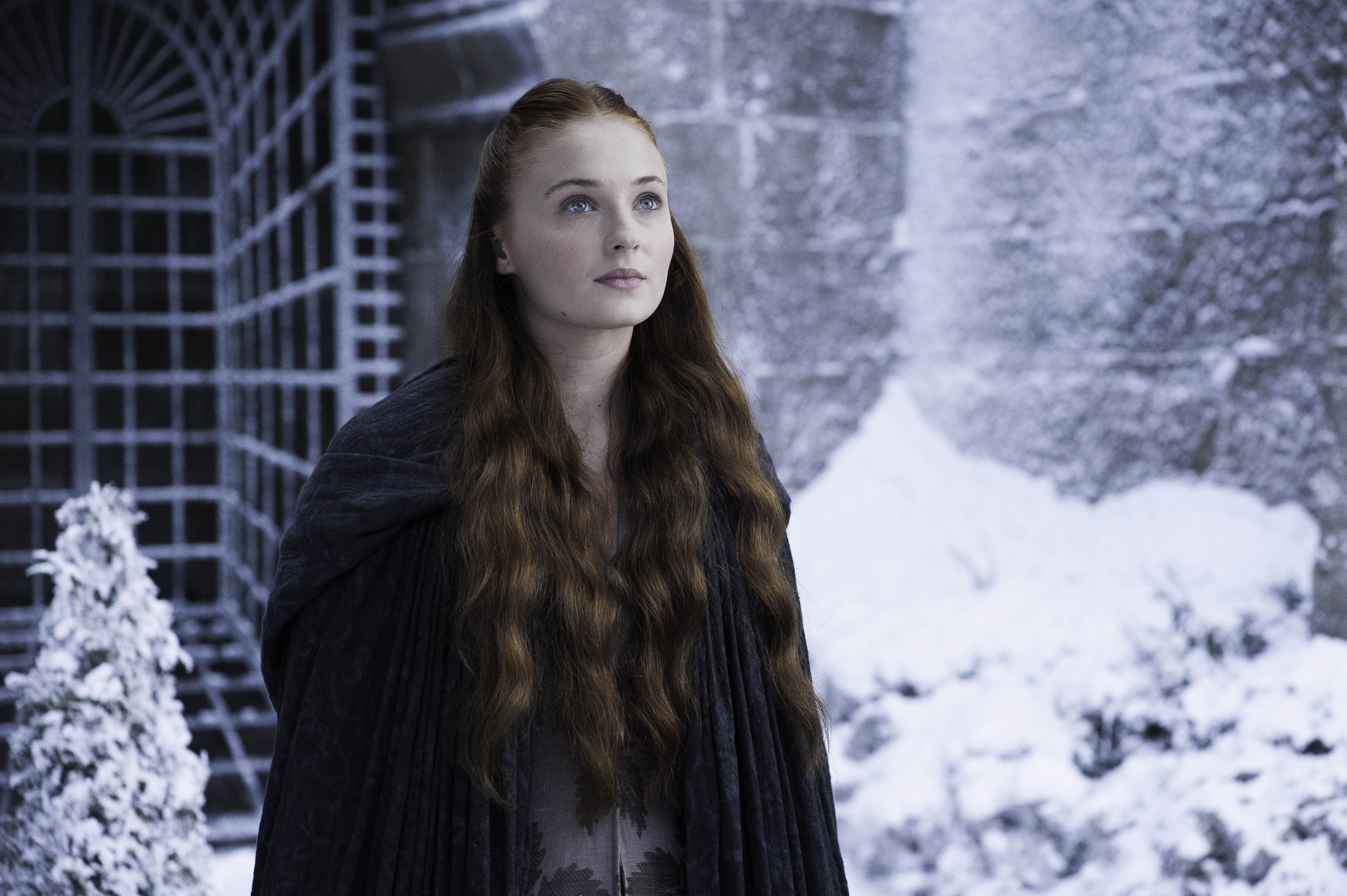 In this edition of “Game of Threads,” we take an in-depth look at Sansa Stark, a character that for the majority of her trajectory uses fashion to adapt or remain under the radar. This is in contrast to characters like Cersei, Daenerys, and Margaery who use the way they dress to exact their station in subtle power plays. This does change, however, in more recent seasons, as she finally comes into her own and begins to use her clothing to show that she is no longer a pawn in another person’s game, but her own person who is now thriving in a position of power. It should be noted that her strongest motif early on is the dragonfly, a symbol of fragility and beauty, but also a creature that goes through many stages of life on the way to its final form. The same can be said for Sansa’s wardrobe. 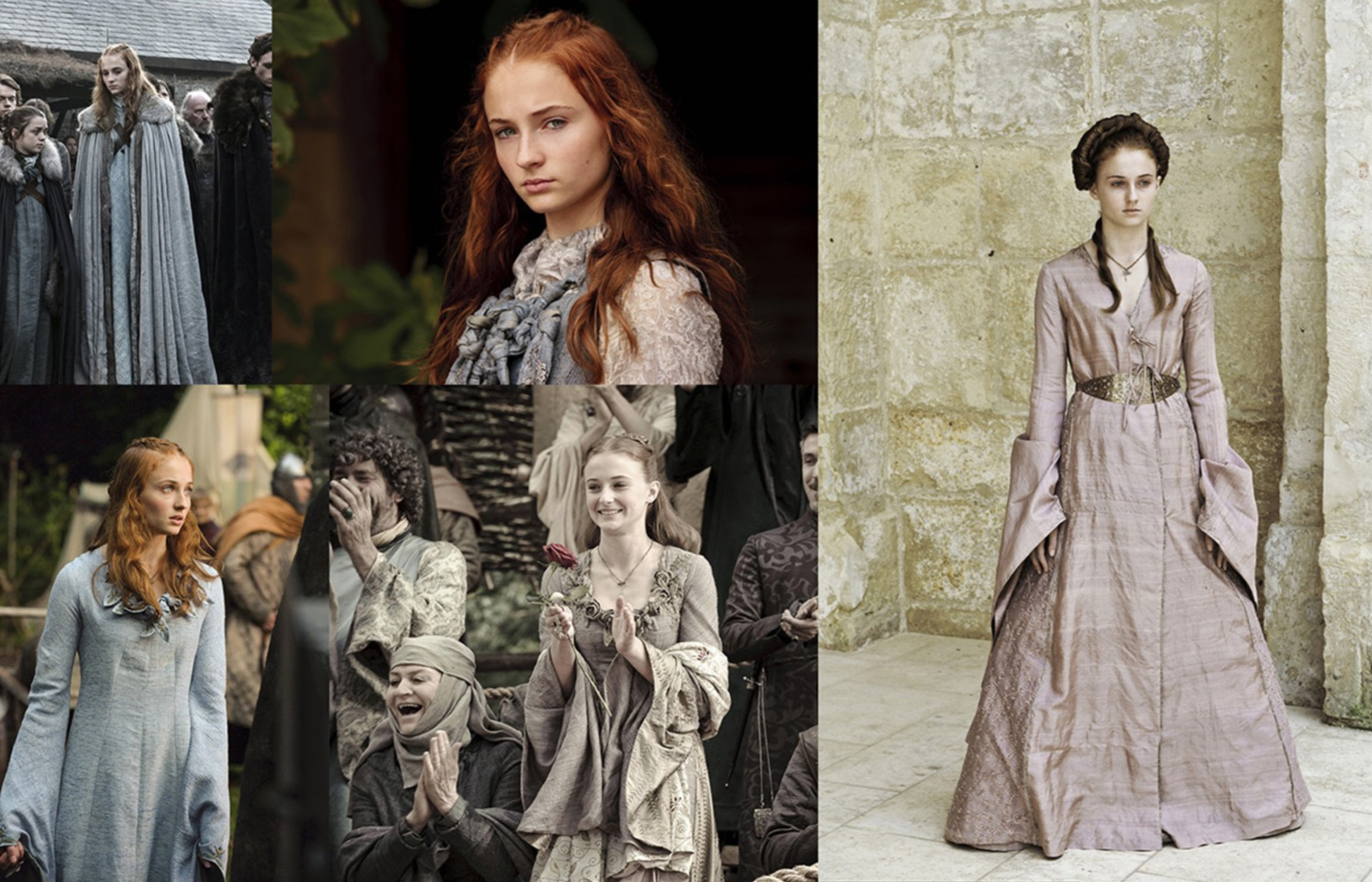 Sansa begins her story in her ancestral home of Winterfell, wearing garments that any high-born lady of the North would, but dreams of becoming queen and dressing in all the finery that comes with it. It is noted that Sansa is a skilled stitcher and makes much of her own clothing. It is evident, however, that because she is young, there is room for improvement, as the dresses she wears are a bit ill-fitting and simple. Still, she delights at the prospect of wedding Prince Joffrey and creates a new dress with a far less Northern influence, replacing high collars and cloaks with knotted roses and other warmer-climate motifs. 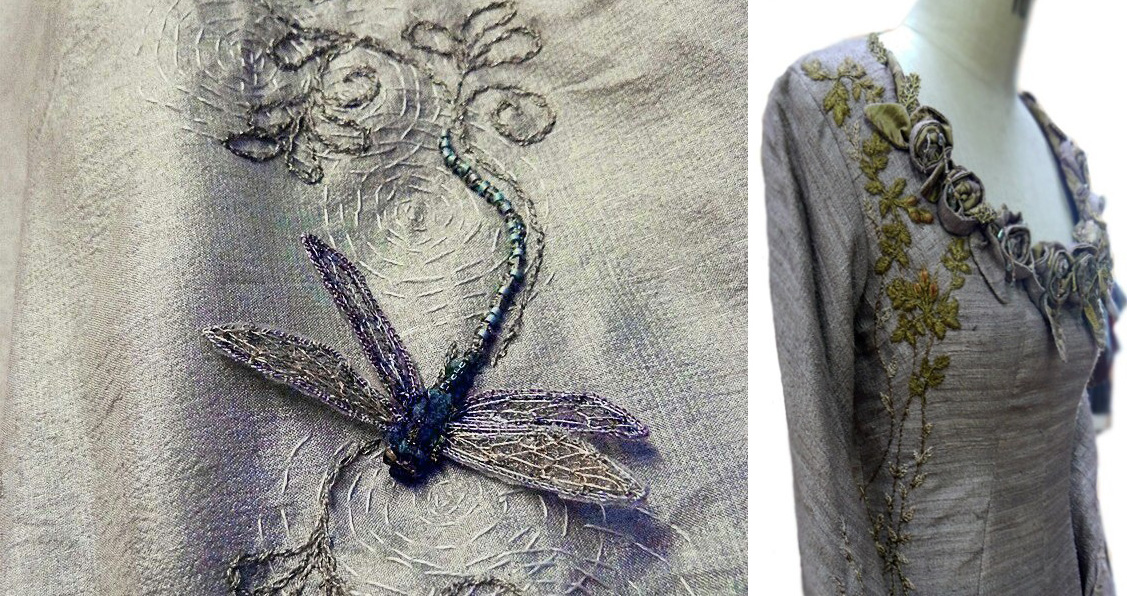 When her father Ned is called to King’s Landing to be King Robert Baratheon’s Hand, she relocates to the Red Keep with him and her sister Arya. There, Sansa slowly begins dressing with a more Southern influence, taking note of the elements of the dress of the current queen, Cersei Lannister. By mid- season, she is regularly sporting the elaborate up-dos of the other ladies of court, and eschews her simpler Northern gowns for Cersei’s robe-like wrapped dresses with detailed embroidery, secured with metal belts, in an attempt to fit in with her new companions. Her signature blue color is still evident in her robes until she is manipulated by the Lannisters and eventually forced to watch the beheading of her father. Afterwards, she begins wearing muted pinks and mauves to try to fade into the background and endure her still-standing engagement to the monster that ordered her father killed. 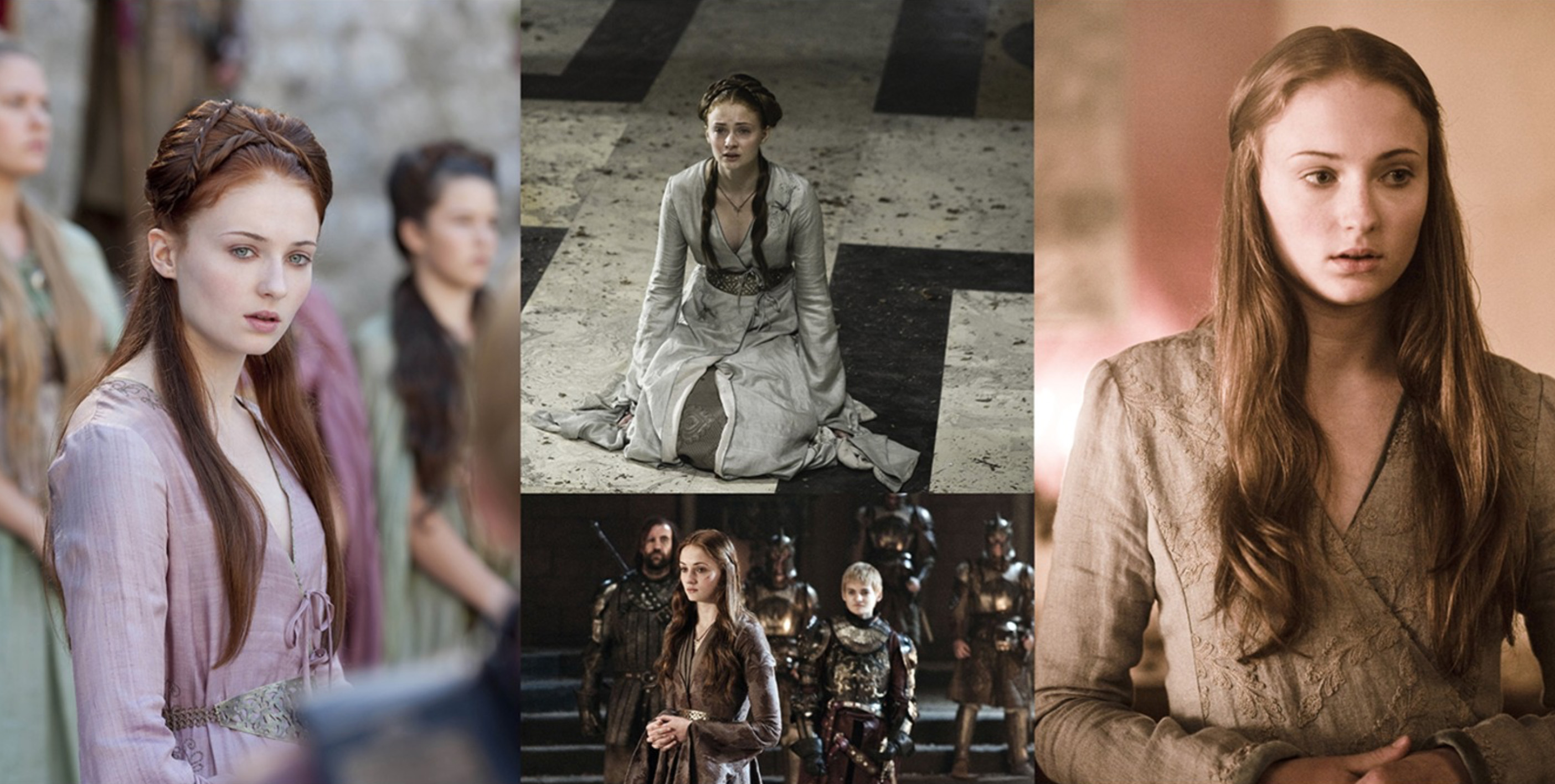 Throughout Season 2, Sansa’s finery and clothing details become less and less a priority for her, as she continues to navigate her way around her psychotic betrothed and her imprisonment to his family. The embroidery becomes less intricate and the delicate pinks and blues give way to heavier purples. In fact, the last time we see her in the Northern pale blue she began the story in is when she begins menstruating, signaling to her captors that she can now bear children, thus belonging fully to them.

When King’s Landing is attacked at Blackwater Bay, Sansa is forced to take refuge with the other women and children of the court. Before this, however, she sees Joffrey off to battle with veiled sarcasm, wearing what will become her new signature wardrobe for the foreseeable future- a dusty mauve colored robe in a heavy damask, with a muted purple scarf under the neckline. Once the city is made safe with the alliance of Houses Lannister and Tyrell, Sansa appears at court wearing the same mauve tones, to watch Joffrey dole out awards and subsequently be replaced by Margaery Tyrell as the future queen, much to her relief. 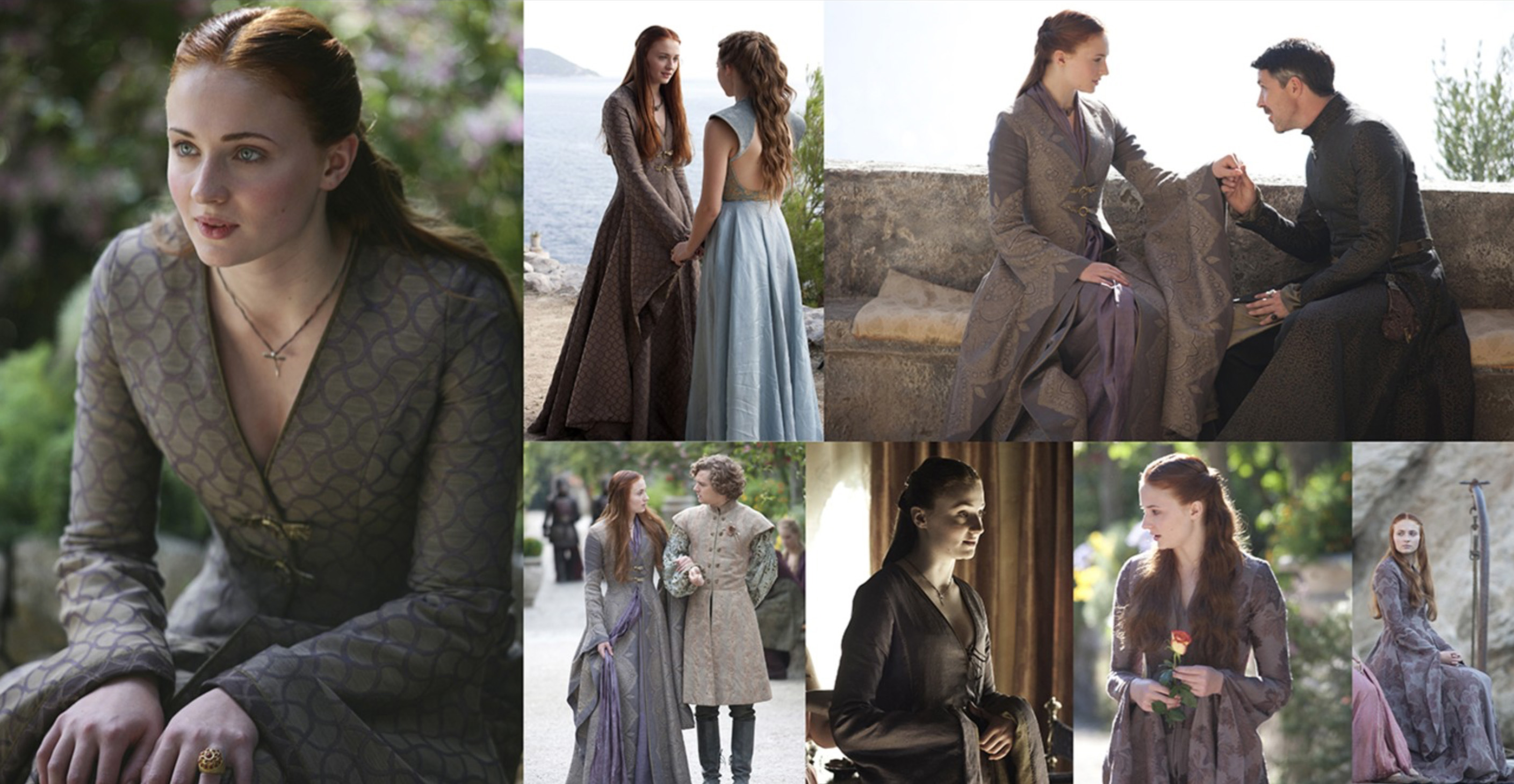 Sansa’s storyline in Season 3 is spent in three variations on the same theme. The purple-on-purple damask robe from the previous season, a more brownish purple with a series of interlocking shapes, and a light mauve with a bolder golden woven pattern. She is no longer the queen to be, but still a ward of the Lannisters so she believes that her best bet is to keep a low profile and remain “muted.” When Margaery and Sansa begin spending time together, Sansa starts to take note of a few of Margaery’s style choices, as well as her influence as a kind-hearted politician and friend. Once marriage is proposed between Sansa and Loras Tyrell, Sansa starts to implement a few Tyrell touches to her look- notably, she begins styling her hair off the face like Margaery for the first time when she meets with Loras following the proposal, quickly adapting to her happy prospect. But keeping Margaery’s influence only to her hair ensures that it isn’t too obvious that there is a plan happening behind the Lannisters’ backs. Still, had she successfully married Loras and left for Highgarden, it would have been nice to see Sansa’s take on the fashions of the Reach. 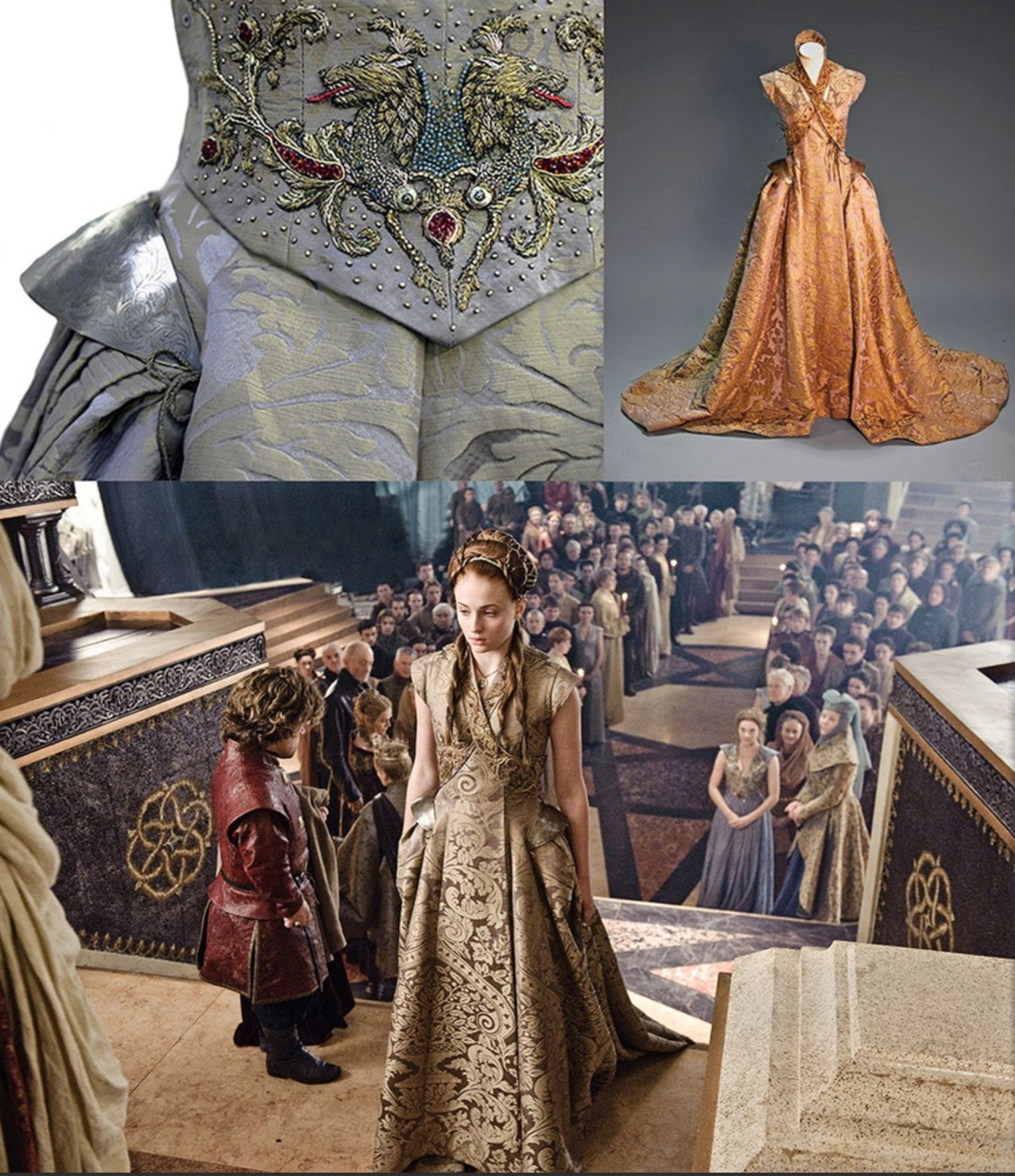 Unfortunately, the plot is quickly put to an end and, to her dismay, Sansa is wed to Tyrion Lannister. Her wedding gown is a culmination of the many elements that were beyond her control that lead her to this point, as well and the many strong women she’s been tutored by, for better or for worse. It is rendered in her muted purple but it has been overtaken with a Lannister-gold woven damask. The cap-sleeves are influenced by Margaery’s own cap-sleeves, the metal hip pieces call to mind Cersei’s armored gowns, and the embroidered piece that wraps from her neck and across her chest calls to mind the embroidered collars of her mother, Catelyn Stark. 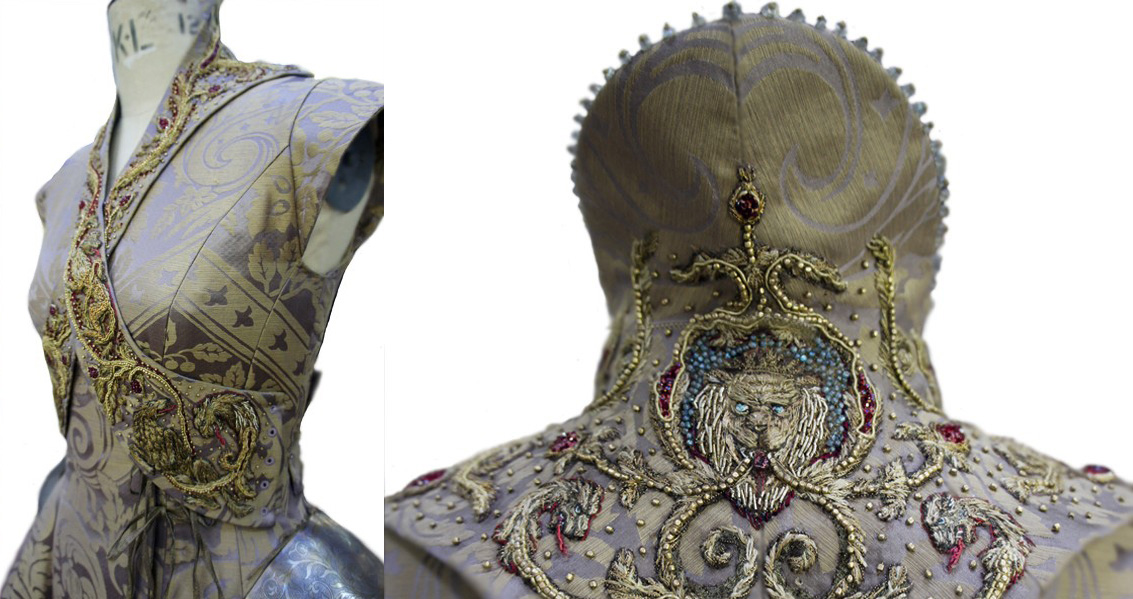 The embroidery, itself, has elements of Stark direwolves and Tully fish, but as the embroidery winds upwards, the direwolves are tangled with lions, leading to the highest point of the piece at the back of her neck features a crowned Lannister lion, her new family by law. Embroiderer Michele Carragher stated that she and designer Michele Clapton wanted the embroidery to look as if Cersei had a hand in designing it, hence the lion ending up on top. Her hair is also back to the full Lannister court updo that she last sported in the Season 2 finale. 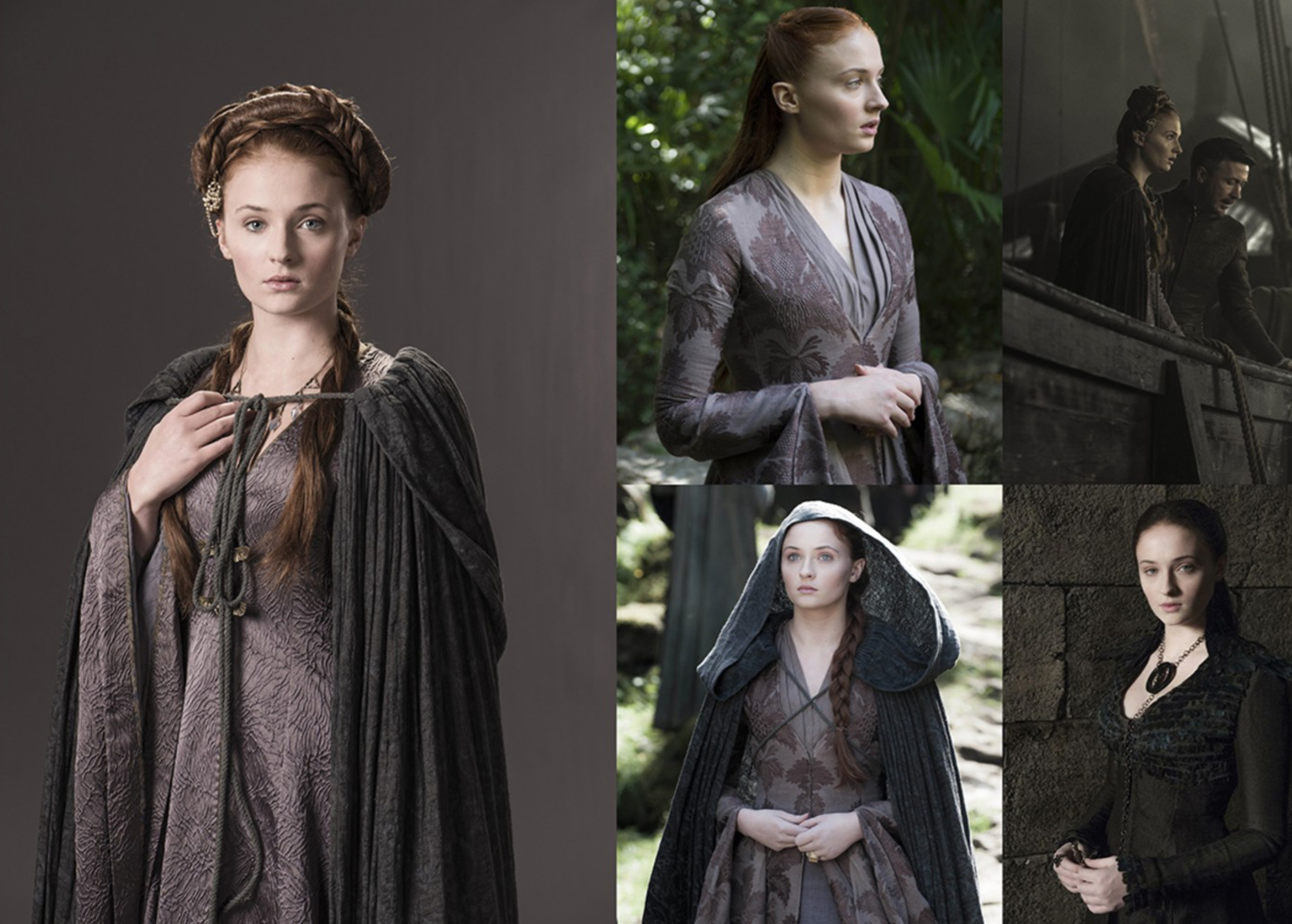 Season 4 begins with the aftermath of her family’s slaughter at the Red Wedding.  Sansa returns to her mauves in hopes that she will again fade into the background and be ignored so she can mourn in peace. Her peace is cut short when she is forced to join the entire capital in celebrating the Royal Wedding of Joffrey and Margaery. She dons a new robe, entirely in a deeper purple silk than usual, with a floral relief pattern (side note: upon further inspection, this looks like it could be cut from a similar fabric to Maragery’s purple “Winds of Winter” dress). This sartorial change is in direct parallel to the drastic change her story is about to take. She unknowingly partakes in the murder of Joffrey, orchestrated by Olenna Tyrell and Littlefinger, by wearing a necklace with jewels made from a lethal poison.

She is spirited away to a ship where apparently Littlefinger had the forethought to pack an extra dress from Sansa’s wardrobe, because she begins wearing a different pattern than the one she escaped in. She takes refuge in The Eyrie with her unstable aunt Lysa and cousin Robyn Arryn, regularly wearing her purple damask until Lysa is murdered by Baelish after their very recent nuptials. He becomes the de facto Lord of the Vale, and she begins to play the game as well as those she has learned from all these years. Her style subsequently takes another bold turn with the now infamous “goth” Sansa dress she created herself, using dark fabric and feathers- a nod to her earlier “little bird” motif- and creating a necklace that embodies her own needle and thread- a nod to Arya’s sword, Needle, and finished the look off with a darker hair color. This is the ultimate power dress for her, and additionally symbolizes her knowledge of how to manipulate Littlefinger’s “mockingbird.” 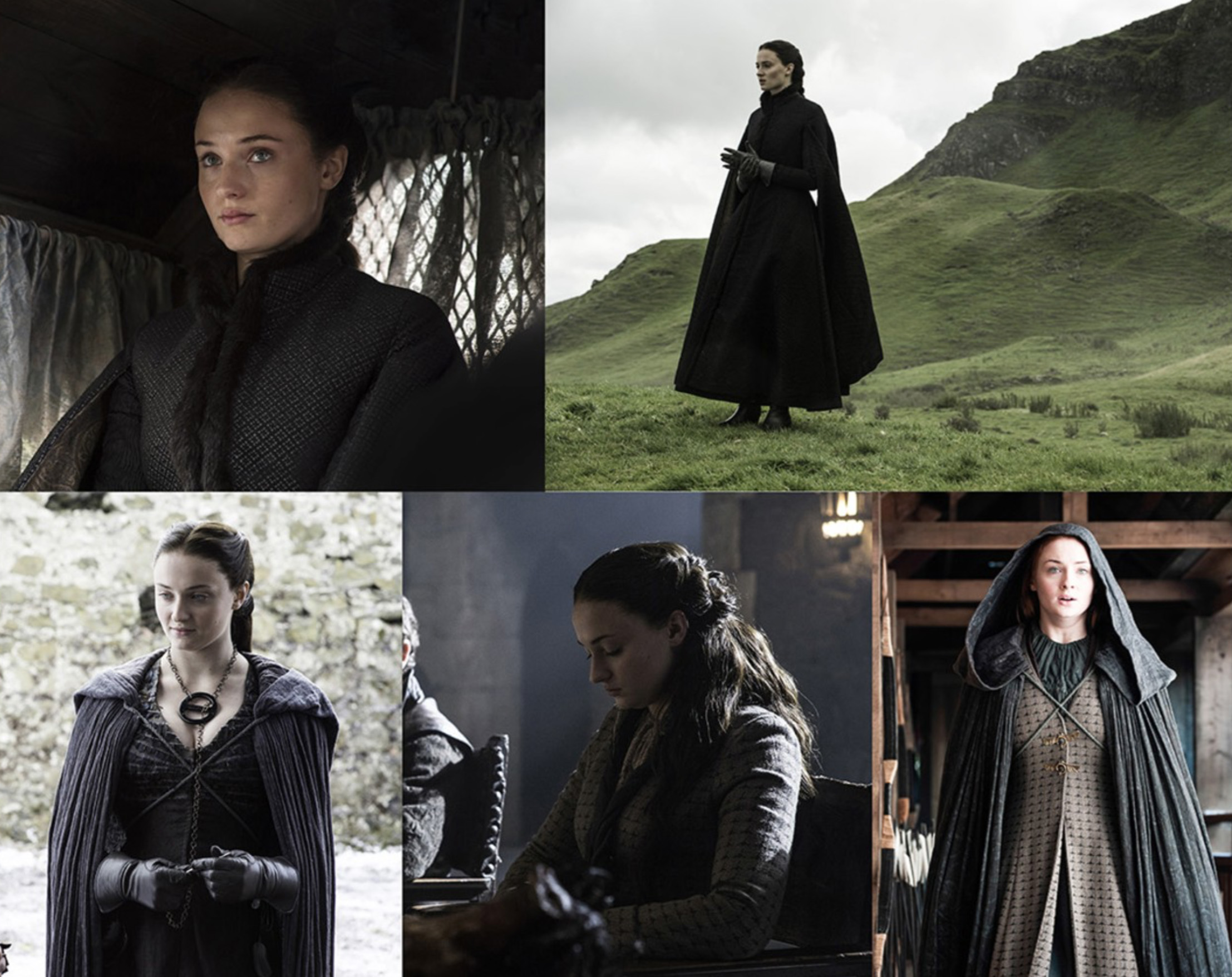 Sansa’s clothing in Season 5 seems to be all over the map. She begins the season leaving The Eyrie and setting out on the road to Winterfell with Littlefinger, wearing an almost carbon copy of his fur-lined, black winter robes. She arrives at Winterfell to her Littlefinger-brokered engagement to Ramsay Bolton, wearing her feathered black power dress again, subtly making sure they know that this is her home. Throughout the rest of the season, Sansa wears what looks like the old robes of Catelyn’s that she found in the castle. Either that, or she made clothing from her memory of her mother, from the shape of the robe, to the embroidered collar, to the gathering of the neck of the Tully-blue underdress. She even begins styling her hair similarly to Cat. Interestingly, much of Sansa’s way of relating to or channeling others is through her hair.

The shape of her second wedding gown is meant to evoke the large furs of her father and brothers, and is fastened with Tully fish clasps- another homage to her mother. The pure white color perfectly complements the snowy North, but also signals to the Boltons that she is still pure and virginal. It is interesting to note that the chevron patter on the majority of the gown is the same pattern that is worn under the armor of Mace Tyrell and his army in “Blood of My Blood.” This is a subtle signal that she is still armed and on her guard, and rightfully so. 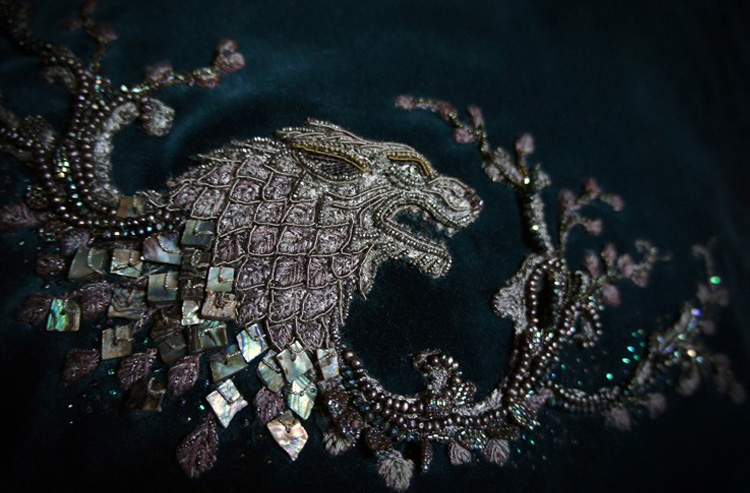 After escaping the Boltons and Winterfell, Sansa finds herself reunited with Jon Snow at Castle Black in Season 6. There, she spends most of her time strategizing with Jon on how to reclaim their home, and less on creating new clothes for herself, but she goes back to wearing her hair in the Northern style of two braids at the crown of her head leading back to a full plait, the same as her introduction in Season 1. She starts wearing furs in practical use for warmth as well as for a visual tie to Jon. The ultimate “Sansa Stark” dress, however, comes when she parleys with Ramsay before the Battle of the Bastards.  She creates a brand-new gown, rendered in a Stark blue-grey velvet, finally, ultimately returning to her roots. It is finished off with an intricately embroidered direwolf, embellished in steel grey, silver, and mother of pearl beads. It is elegant, stately, at the same time both delicate and strong, and it is a giant “fuck you” to Ramsay. 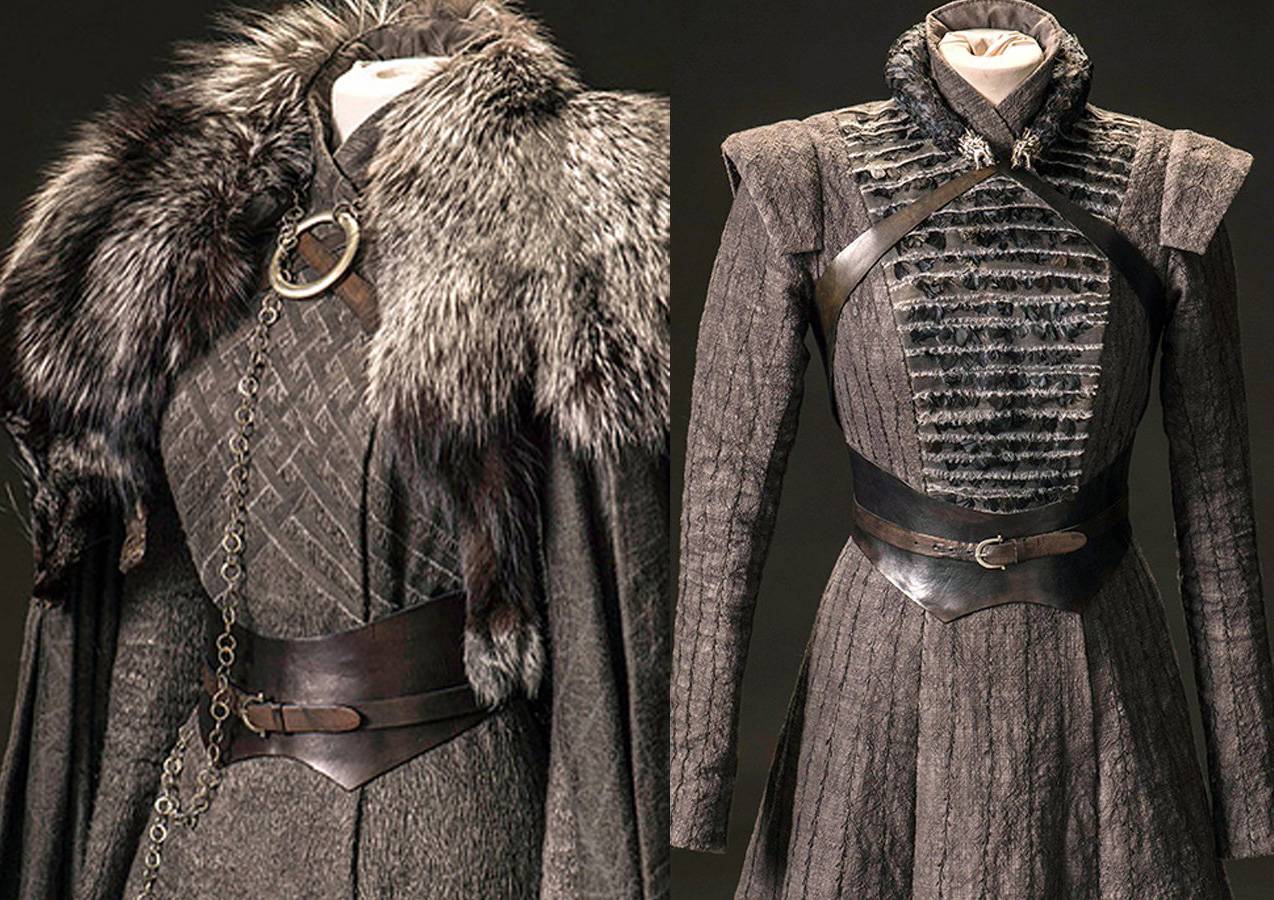 Now, in Season 7, as the Lady of Winterfell, fully in control of her future and governing Winterfell in Jon’s stead, Sansa is dressing the part of commander. Her color palette exists solely in the blacks, greys, and browns of the North, and she wears a formidable fur cloak to emulate the male leaders before her, but again, keeping design elements as reminders of all those that have shaped her journey along the way. Her needle necklace has been reimagined in a solid steel and elements of her gown call to mind armor, to protect herself once and for all from those that would seek to manipulate or harm her. Sansa has now come into her final evolution, or, to borrow ASoIaF text, gone from “porcelain, to ivory, to steel.”