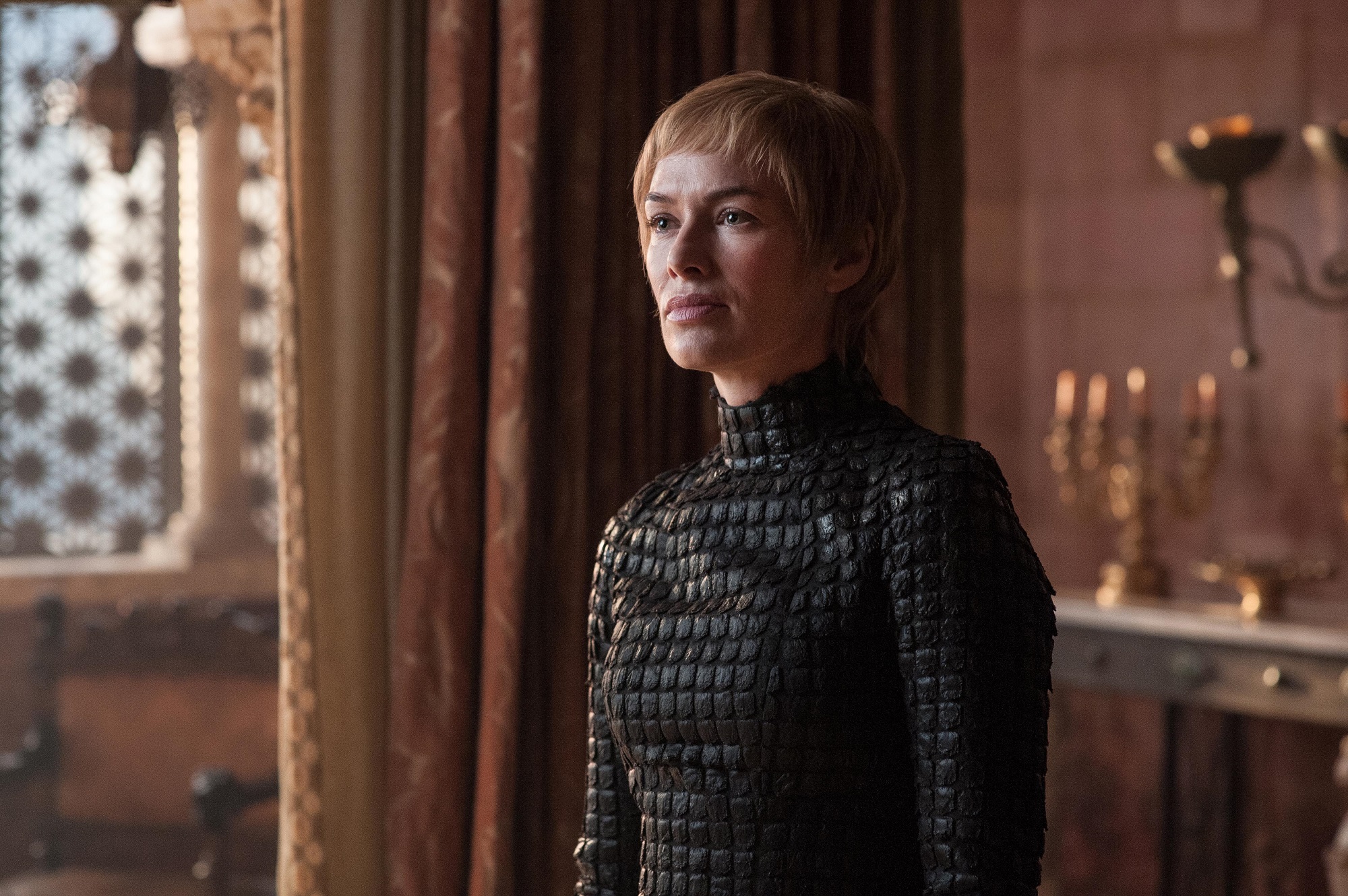 The aftermath of “Eastwatch” left me excited to see how the final episodes of Season 7 will unfold, but it also left me with the notion that there might not be many new costuming prospects as the finale gets closer and closer.  War is in full swing, and with the expedition north of The Wall underway next week, I believe the majority of what we’ll be seeing as we move forward will be furs and cloaks as opposed to embroidered sigils and and metalwork, though we did get a few new things in this past episode- a different pattern on Sansa’s dress, Gendry’s leather tunic, etc., but not enough to have that great an impact on the story.

That said, Sue and I discussed a way to continue the costuming talk in the event that there aren’t costume-heavy episodes.  I hosted a panel at Con of Thrones earlier this summer, that focused on the leading female characters and how their clothing choices have evolved as they themselves evolve throughout the series.  We figured it might be nice to re-open the discussion, starting with everyone’s favorite mad queen, Cersei Lannister, and what drove her to wear what she wears currently in Season 7. 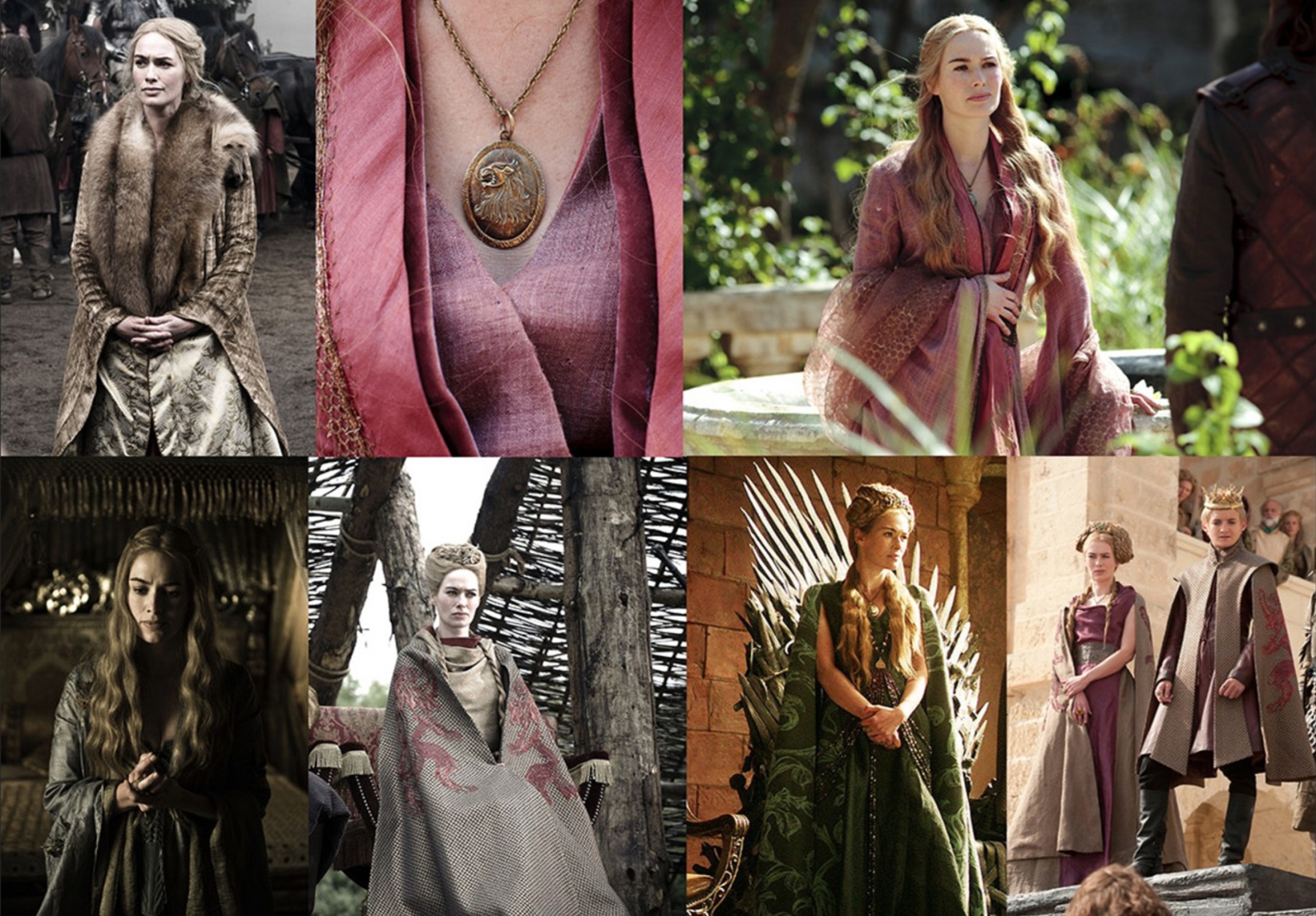 It is clear from S1E1 that Cersei uses the way she dresses to send a message to others.  She is richer, more powerful, and more influential than any woman in the Seven Kingdoms.  Look at the golden fur coat she wears when she arrives at Winterfell- she is the Queen of Westeros, married to King Robert Baratheon, and she shows it by wearing the most expensive and expertly crafted clothing money can buy.  Season 1 was finding its footing and trying to establish a universe that wasn’t a clichéd fantasy world that we would expect if we hadn’t read the books.  The elaborate asymmetrical hairstyles and mix of hard and soft elements in the garments is unlike what we would come to expect, for example, from female characters in films like Lord of the Rings.

Cersei is the trendsetter, the be-all-end-all for a young girl like Sansa Stark, because she is grander and takes more risks than other ladies like Catelyn or Lysa Tully, but there’s almost sense of holding back in her choices because she is consort to Robert.  To appease his ego, the majority of her Lannister reds and lion-heavy embroidery aren’t featured until after he dies.  Her color palate of pinks, blues, and greens is muted and much softer than in later seasons.

After Robert’s death, Cersei’s clothing becomes more structured and imposing, even going as far as virtually dressing like Joffrey at Ned Stark’s sentencing.  This is meant to seem like she and her son have a united plan for Ned, until Joffrey pulls a fast one and has him executed.  Still, it is Robert’s death, when her house becomes the ultimate power behind the throne, that Cersei finally lets her true Lannister out in her clothing. 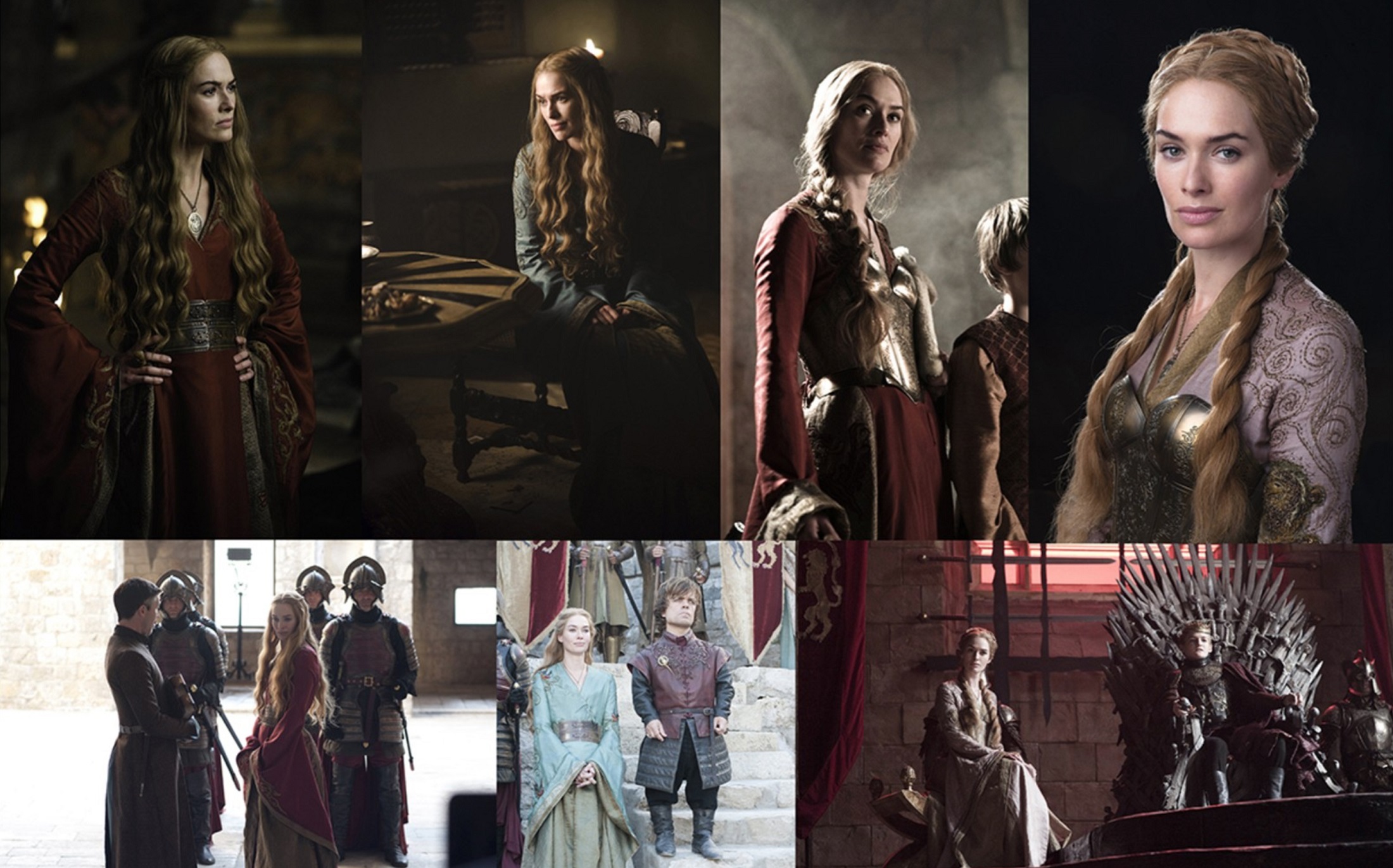 Season 2 is all about Cersei coming into her own as a power-player, even if it’s through attempting to manipulate Joffrey.  It is here that we first see her deep red, heavily embroidered robes with an armored belts.  A look that will become her signature for the majority of the series.  She now has the power, but her paranoia of losing it is evident with each passing episode.  Yet there are still a few gowns we see her in that aren’t completely Lannister’d out, which give us the idea that she’s not gone completely on the offense.  Curiously, she has a sparrow motif embroidered on her gowns, perhaps to show that she’s finally broken free from the confines of being married to Robert.  She wears these softer gowns in other instances, but most notably when Myrcella leaves the Capital for Dorne.  Her loving, maternal side comes out- one that is helpless to protect her child as she sails to another part of the world.

The Battle of the Blackwater is when Cersei’s true paranoia starts.  Jaime has been captured, Joffrey is called out during the battle, Myrcella is gone.  Tommen is the only child she is able to look after as she, Sansa, and the other ladies of the court are shut away to wait out the battle.  She feels backed into a corner.  She wears a metal armor breastplate over her red robes to signal her being ready for battle, something that she reiterates in S7E5, “So we fight and die, or we submit and die.  I know my choice.”  But while Cersei uses her armored battle dress to intimidate Sansa, it is a defense mechanism to hide the fact that she is truly fearful for her and her son’s life.

Once the Tyrells sweep in and help the Lannisters win the Blackwater, everyone receives rewards and accolades dressed in their battle-worthy armor.  Cersei, sitting next to the Iron Throne, is still wearing her breastplate, making sure that she is also seen as a victor along with her father Tywin, and the likes of Loras Tyrell.  She also further uses it to antagonize Sansa as Sansa’s betrothal to Joffrey is set aside in favor of Margaery Tyrell.  Cersei is so eager to distress Sansa that she doesn’t yet see what she’s gotten herself into with Margaery. 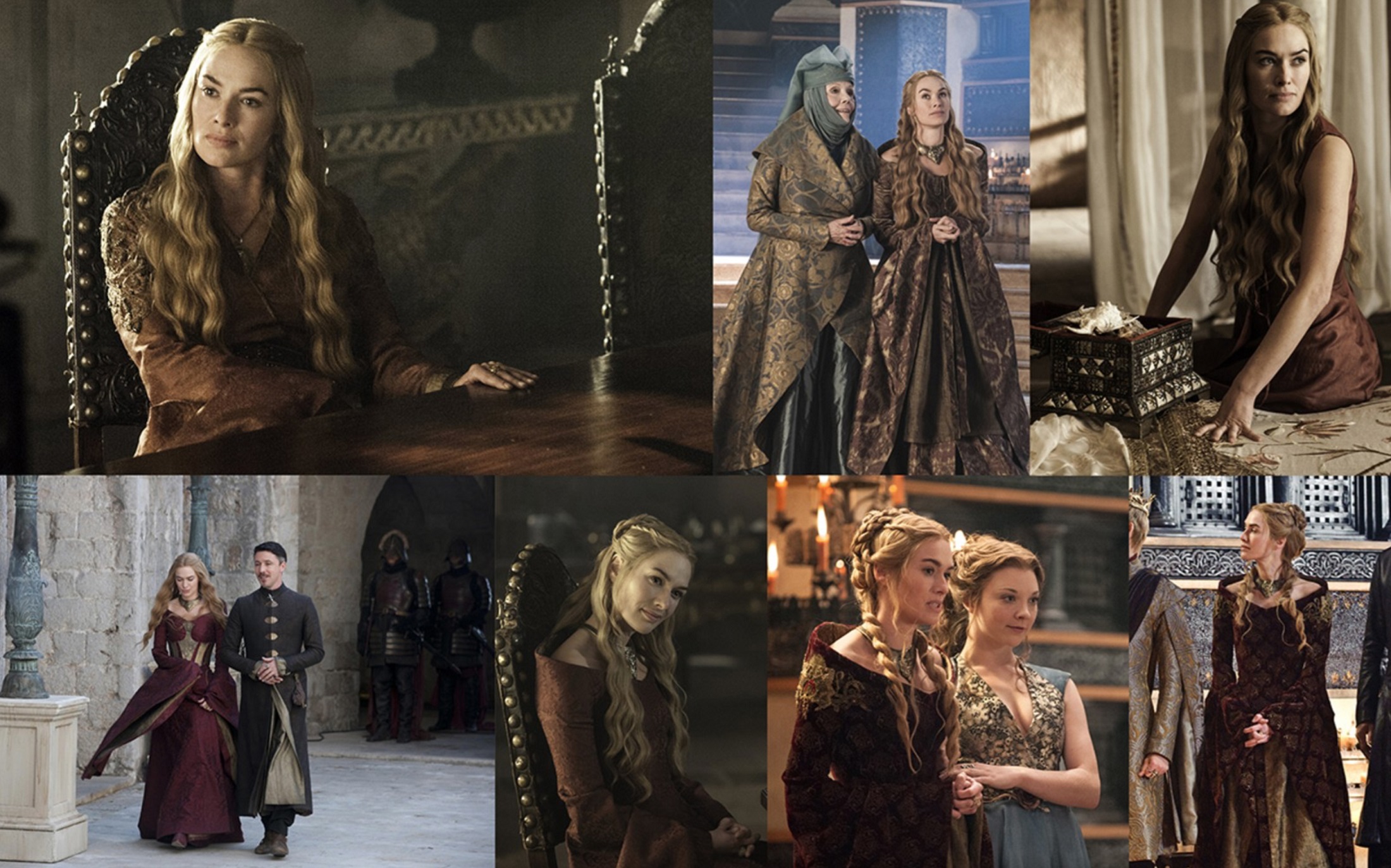 In Season 3, Cersei finds herself to be no longer the setter of trends, now that Margaery is in line to become the next queen.  Margaery uses her PR skills to not only win over Joffrey, but the people of King’s Landing as well.  In doing so, the ladies of court begin adopting her Highgarden fashion choices, much to Cersei’s annoyance.  Cersei retaliates, not by challenging Margaery with even newer and more exciting clothing, but with more armor and more protection.  In fact, the dialogue in S3E1 directly touches on how Margaery and Cersei are using their clothing to spar with one another.

Margaery: Isn’t the queen’s gown magnificent? The fabric, the embroidery, the metalwork.  I’ve never seen anything like it!

Cersei: You might find a bit of armor quite useful once you become queen.  Perhaps before.

She sees Joffrey slipping away from her control and feels the need to pack on the steel plate to keep her safe from losing her standing with the people, and with her children.

Oddly enough though, she takes Margaery’s Season 2 Alexander McQueen-inspired “cone” dress and implements the shoulder treatments into her gowns, as a way of keeping relevant among the common folk, but adorns it in heavy gold beading so no one will question her power or loyalty to her family.  Another interesting thing to note is in S3E4, when Cersei, Olenna, Margaery, and Joffrey visit the Sept of Baelor, how similar Cersei and Olenna look.  Each has their own signature look but the grandeur of these matriarch’s brocades and silhouettes calls back to one another.  Cersei is no longer the young queen and is now passing into the next stage of her life, according to Westerosi standards at least, much to her dismay.  We don’t have knowledge of Maggy the Frog’s prophecy until a few seasons from this point, but the grounds are being laid and everything about Margaery screams the “younger and more beautiful” queen that will take all she holds dear. 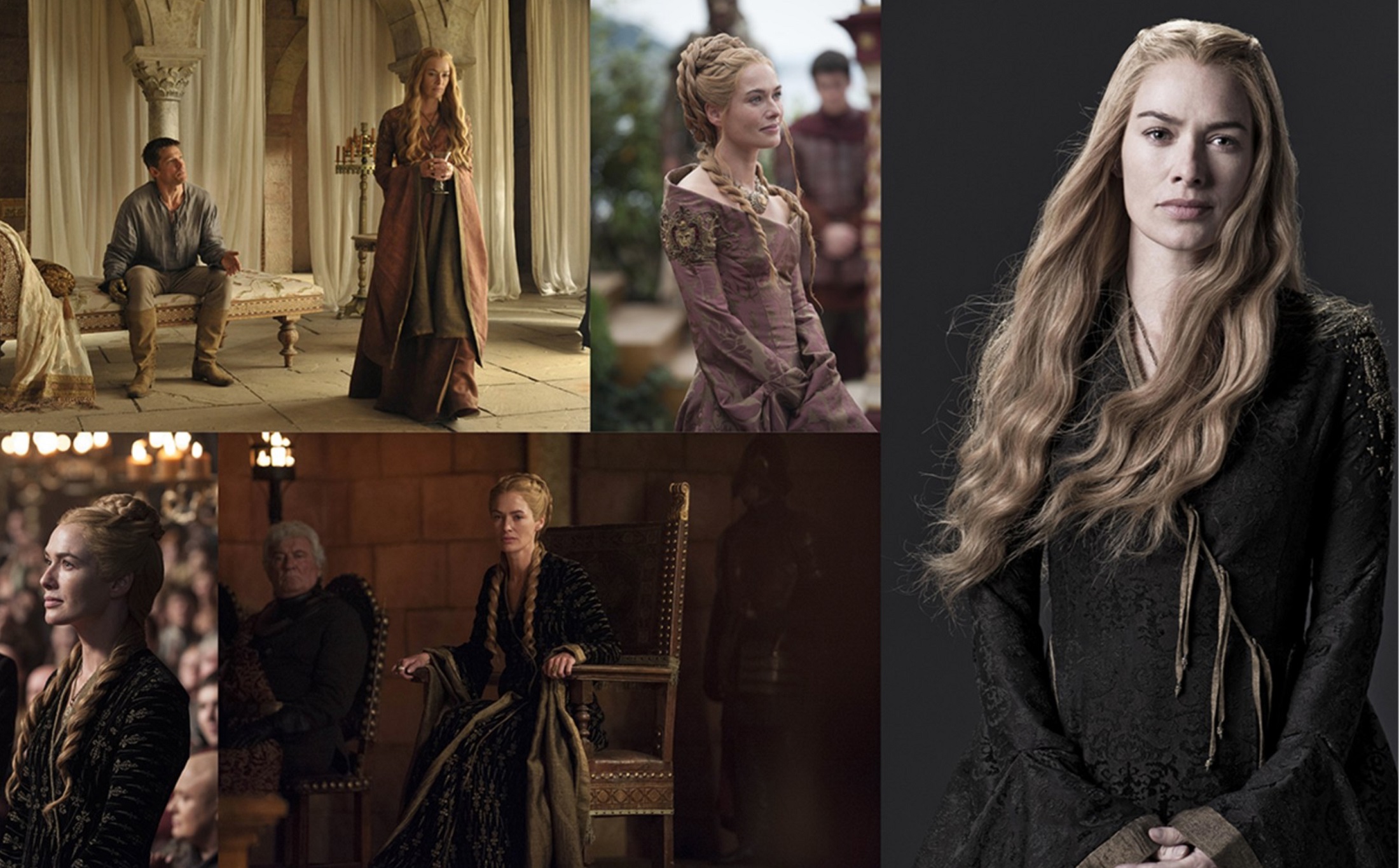 The beginning of Season 4 continues Cersei’s affront on Margaery- the same shoulder treatments, both of them vying for the highest hair at the royal wedding, but it all comes undone when Joffrey is poisoned at his wedding feast.  The Capital goes into mourning, but Cersei never really shakes it.  Even into the following seasons, she dons black versions of her red robes and the proud Lannister-sigil embellishment is replaced with skull beading, half-dead lion embroidery, and dagger motifs, a not-so-veiled threat to the murderer of her son, whom she believes to be Tyrion. 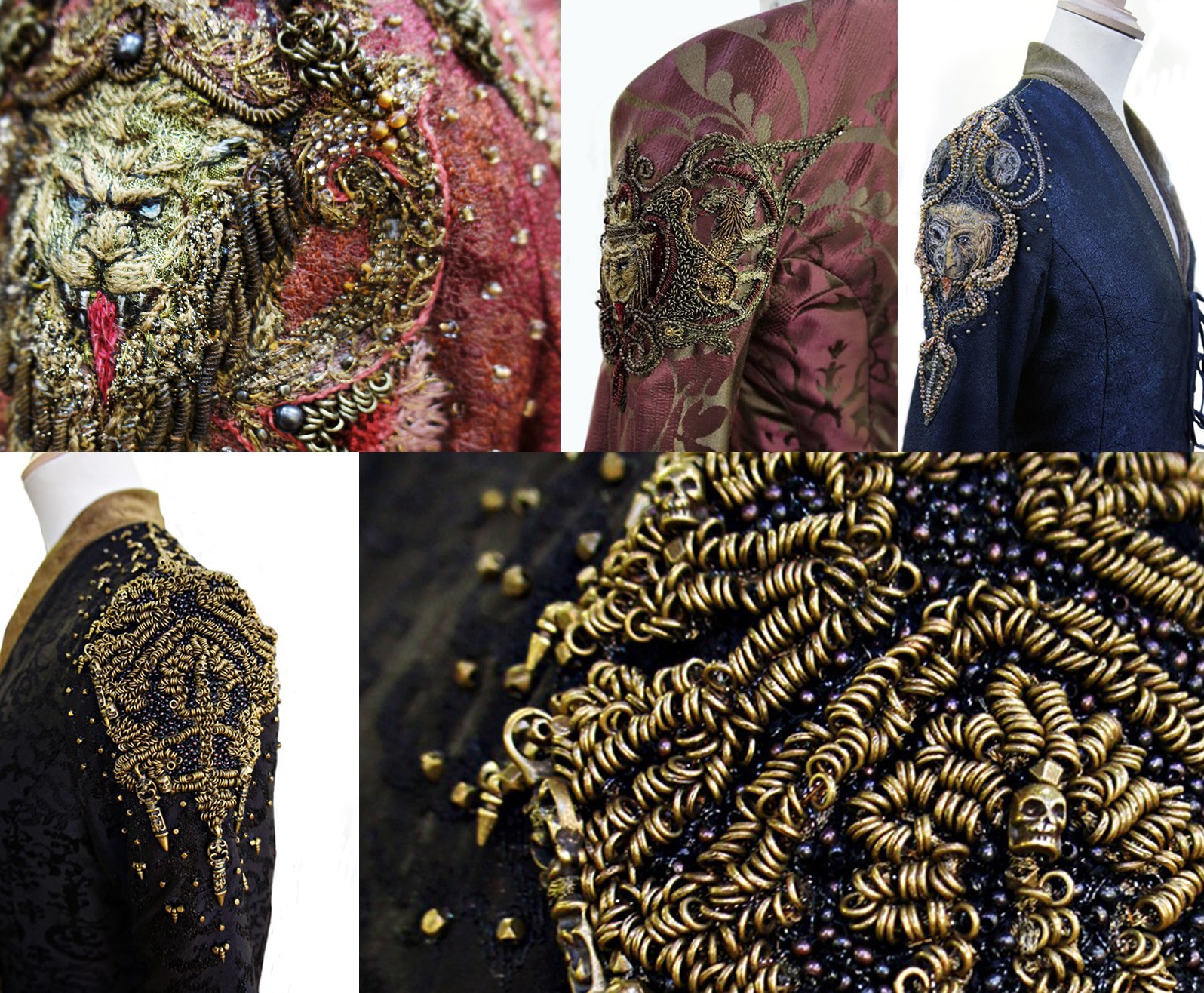 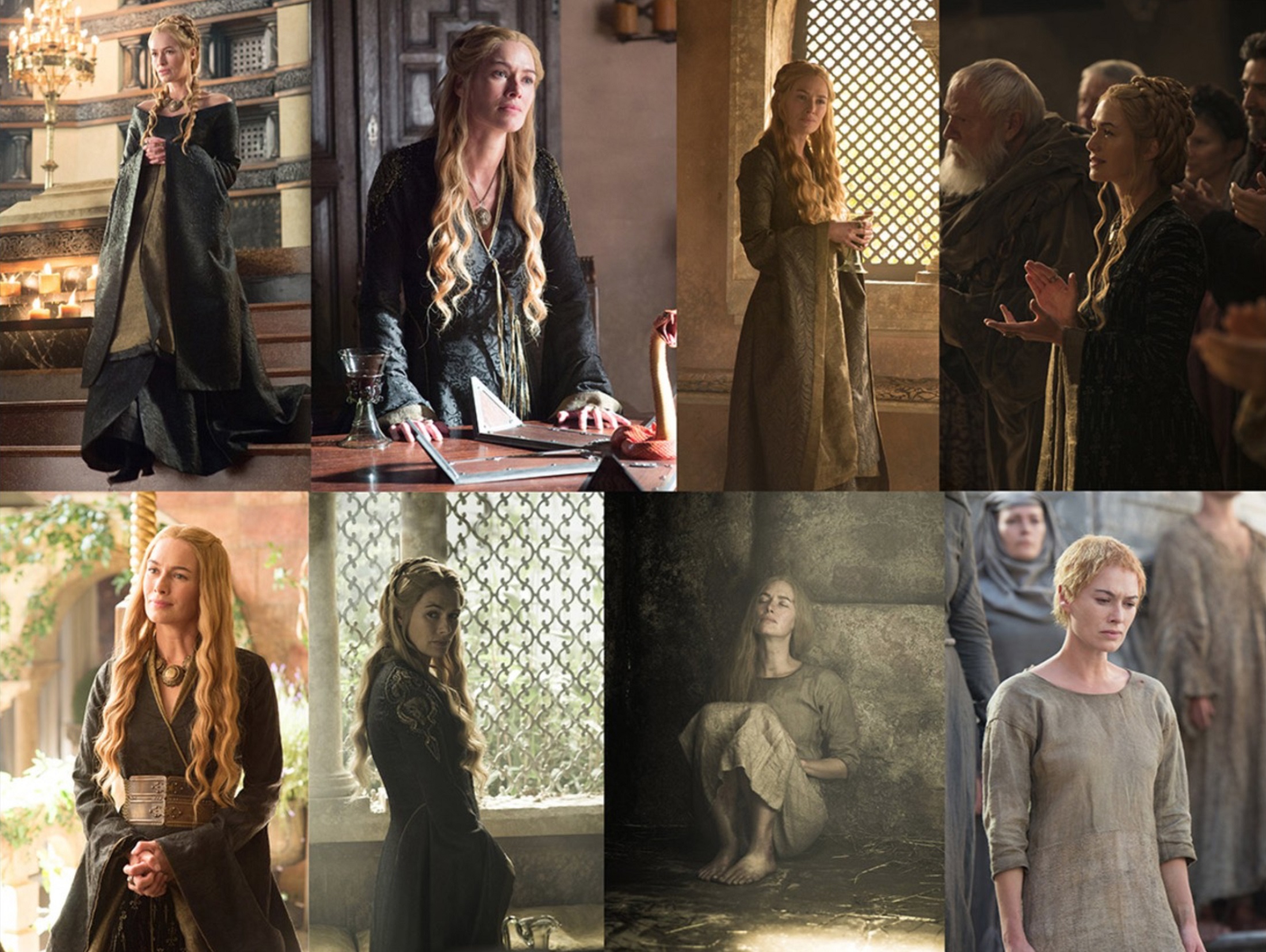 Save for her brief stint in the Black Cells in Season 5, and her S6E1 hopeful red dress when she believes Jamie to be returning with Myrcella, she continues to wear her same black mourning robes until she finally seizes control in S6E10.  She obliterates all of her enemies in King’s Landing, and becomes The Queen on the Iron Throne, finally wearing exactly what she wants to wear.  Her entire life she resented the fact that no one took her seriously because of her gender, but now she is making sure no one will ever question her rule as a female monarch by dressing in her new, imposing silhouette. 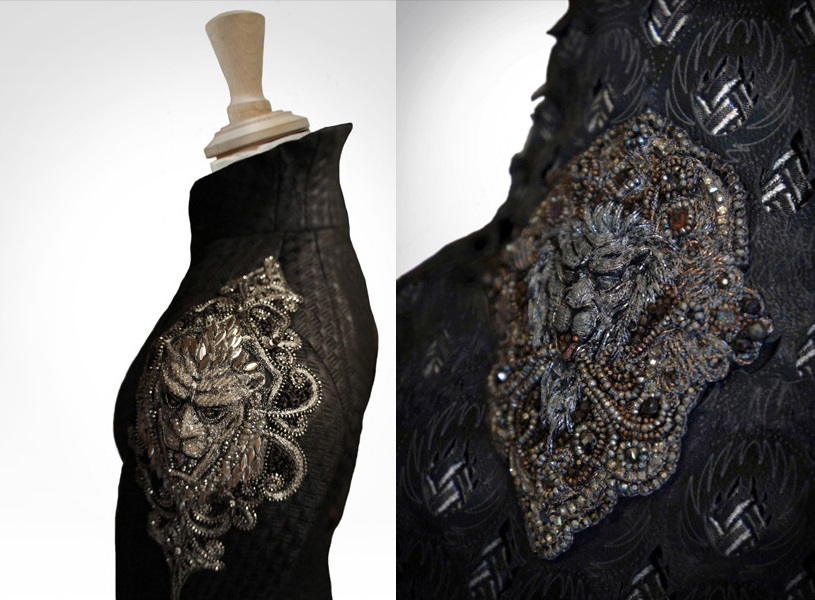 As the earlier Season 7 posts state, she’s now emulating Tywin’s high-neck, black leather motifs, as a way of exacting her power, and also keeping her safe from her enemies.  Every inch of her body is covered and protected.  Cersei has also lost all of her children, the last things that kept her hopeful and soft, and that is also reflected in her unwavering commitment to wearing black- an impactful intimidation tactic, but still reflective of a permanent state of mourning for her family.  Her once golden embroidery has been replaced with the cool steel colors of the Iron Throne, rendered in intimidating spikes and armor, and she keeps her hair shorn to eschew all femininity.  Cersei will not give up the throne lying down so she is prepared to die fighting for what she believes is hers. 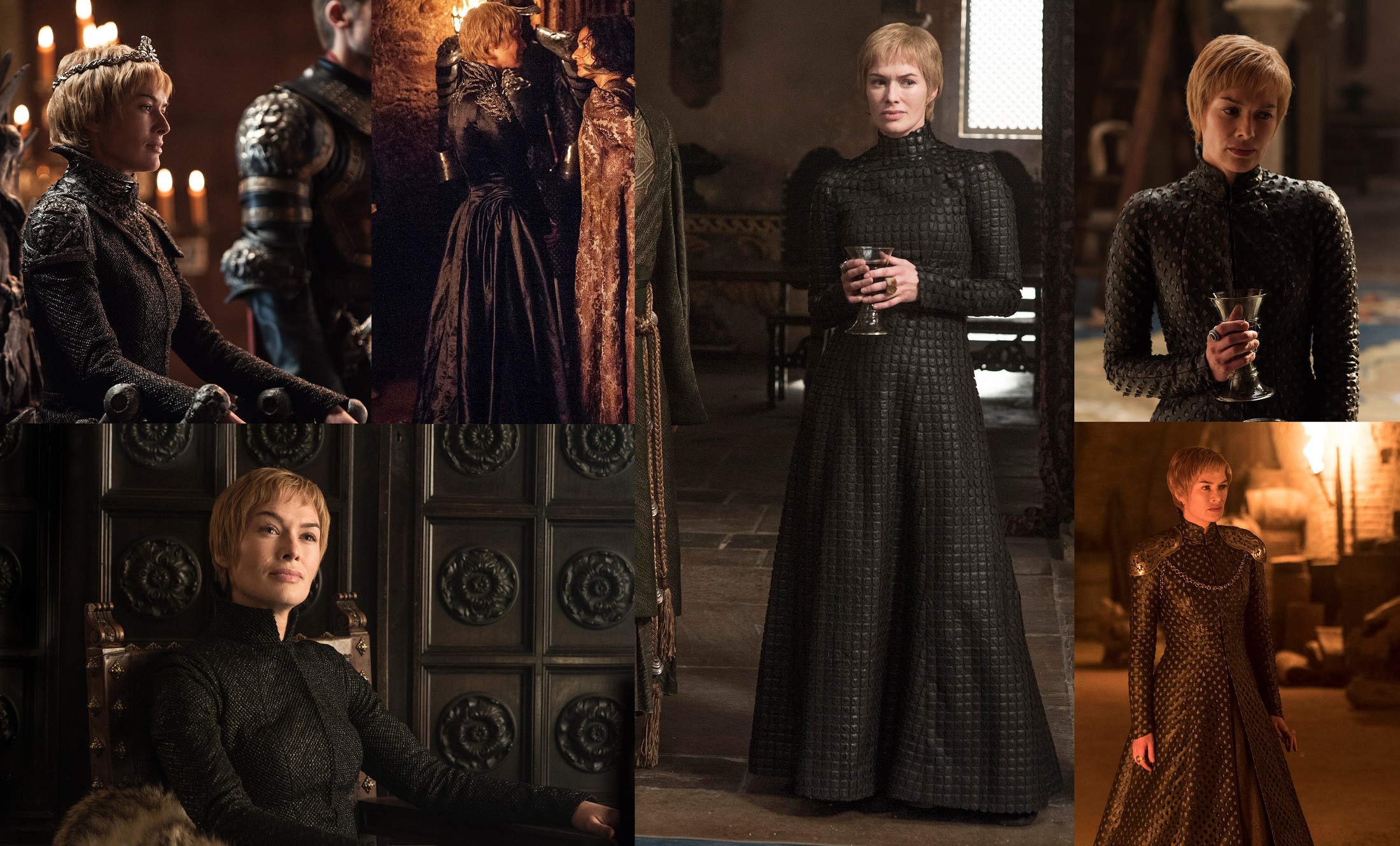 If Cersei makes it to Season 8, I will be interested to see if her costuming stays the same, or if something happens to send her style into yet another direction.