Game of Threads: The Bells | Watchers on the Wall | A Game of Thrones Community for Breaking News, Casting, and Commentary 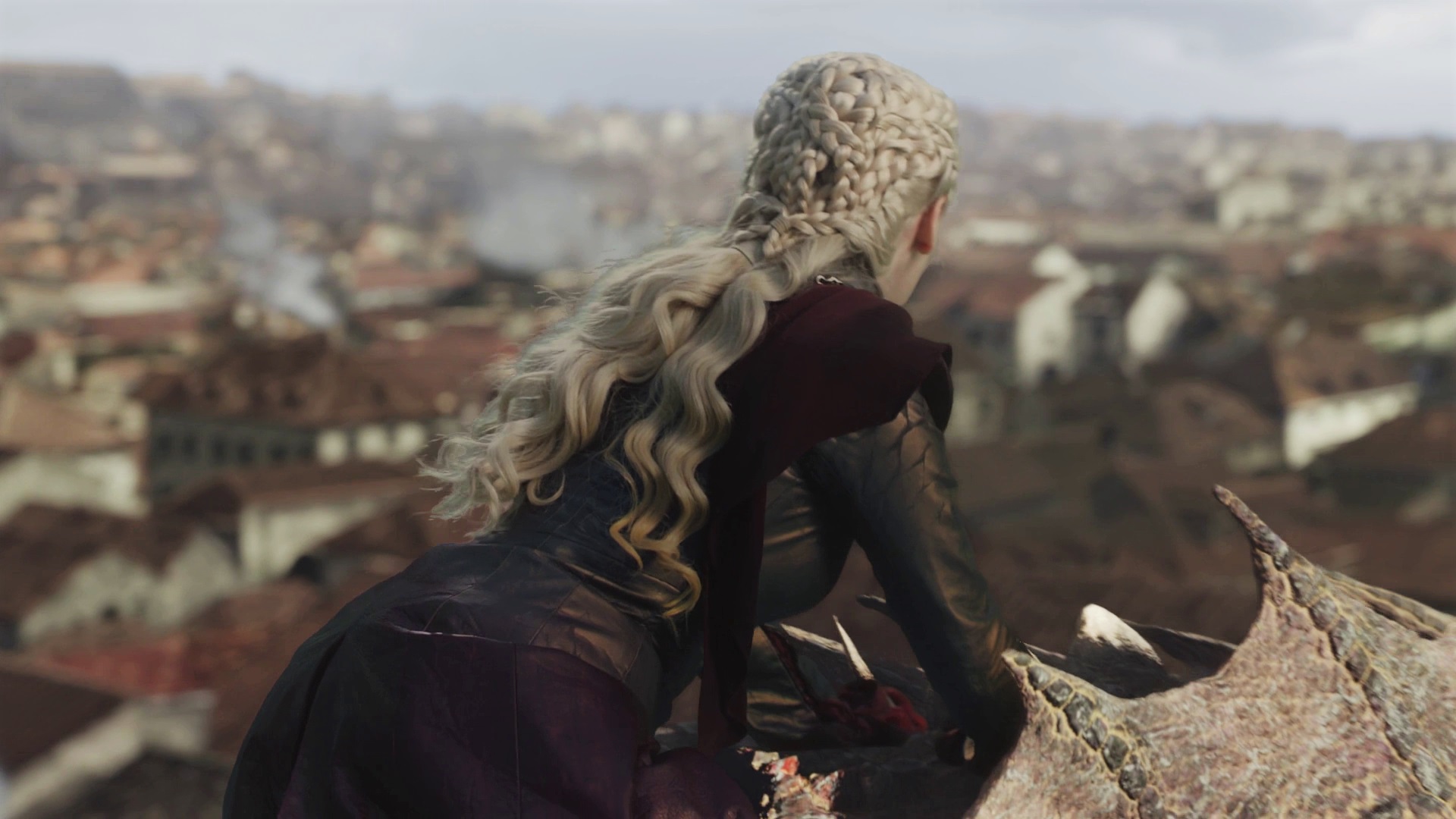 Michele Clapton has never shied away from giving us heavy symbolism during important moments for the characters. Sometimes it’s visually very obvious like Sansa’s “Eyrie” dress, Margaery’s wedding gown, or Cersei’s “Tywin” homage when she takes her crown. Sometimes it’s subtler like a dagger woven into a textile, or the deeper meaning of a particular color. Clapton, in my opinion, really shines in those subtleties. They are more like a secret for the character as well as the actor, more personal, more meaningful. So often in the series, we see very surface adornments of allegiances to great houses, kings, queens, and so on, but once we really take a deeper look at the fabrics and embroidery, we can see the secrets that tell the stories of so many of the leading characters. 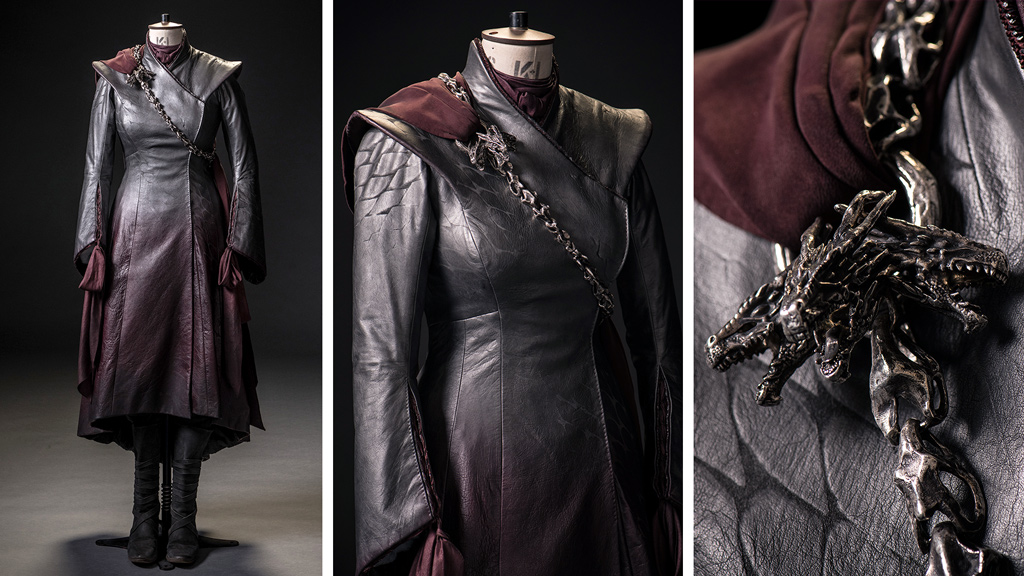 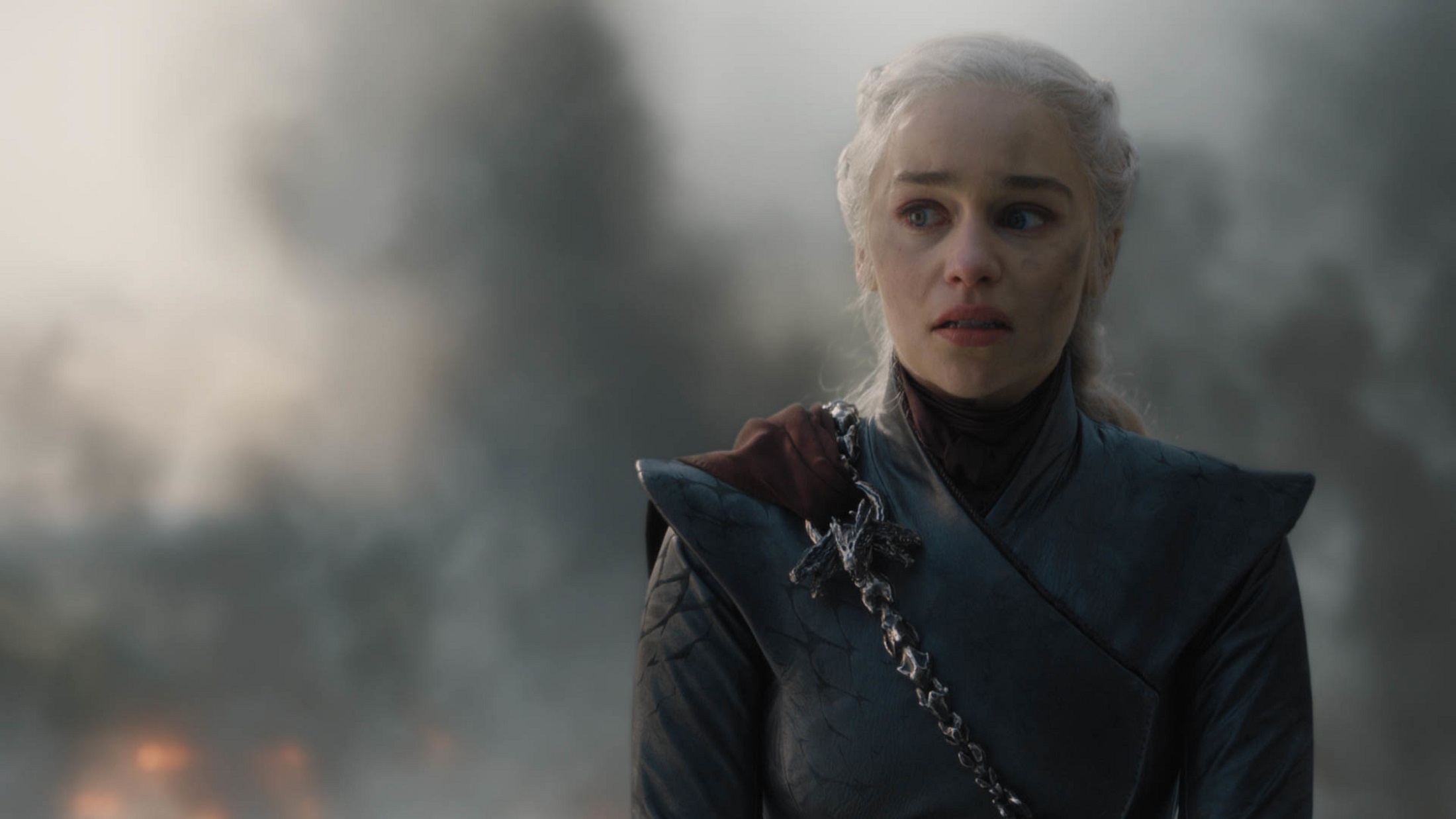 Take Daenerys’ riding coat that she wears this episode. At first glance, it looks like a black leather version of the red coat she wore to last episode’s feast. That enough would be impactful, as it can be argued that smoothed, black leather has often signified a call to action (Cersei taking the Iron Throne, Sansa’s Winterfell armor, the uniforms of the Unsullied, and just about everything Tywin wore,) and this was absolutely a call to action for Dany. It’s also the most aerodynamic riding coat she’s had yet.

When you look closer, however, the leather is embossed with large dragon scales that look as if they are beginning to close in around her body. Dany has often implemented a scaled motif into her outfits by way of embroidery and embellishment. This is meaningful to her, and extremely beautiful, but beading is delicate and merely a decoration. It’s not integral to the overall structure of a garment. Having the scales embossed into the actual fabric shows what Dany has been all along: a Targaryen, a dragon, capable of terrible destruction. The scales are part of the DNA of the coat, and by extension, a part of her own DNA. It’s no coincidence that she’d be wearing something like this when she tragically falls victim to her bloodline.

But again, it’s something that only Dany knows. It’s for her, and not anyone else. Contrast it to the white fur coat that she wears upon arriving in Winterfell back in the season premiere. The garment is declarative and sends a message (whether you subscribe to the “savior” idea behind the color, or the “Queen of Meereen” symbolism), but it isn’t her, especially in the fabrication. She’s never had to pile on fur for warmth because she’s never needed to keep warm, and her trying to dress for the North in her own way has only furthered her isolation from the people of Westeros. Her hair is also being worn in a less crown-like way than she used to, and has been slowly evolving into a more reptilian style, really tying her visually and emotionally to Drogon and her two fallen children. This whole look is a walking embodiment of her and her ancestors: leathered dragon scales flying through the air, raining fire over the lands below.

It can also be noted that the textile of red cape she wears ties her directly to Cersei. It has a very velvet-like quality to it (though I believe it’s sueded leather), which looks like it could have been cut from the same fabric as Cersei’s dress this episode. 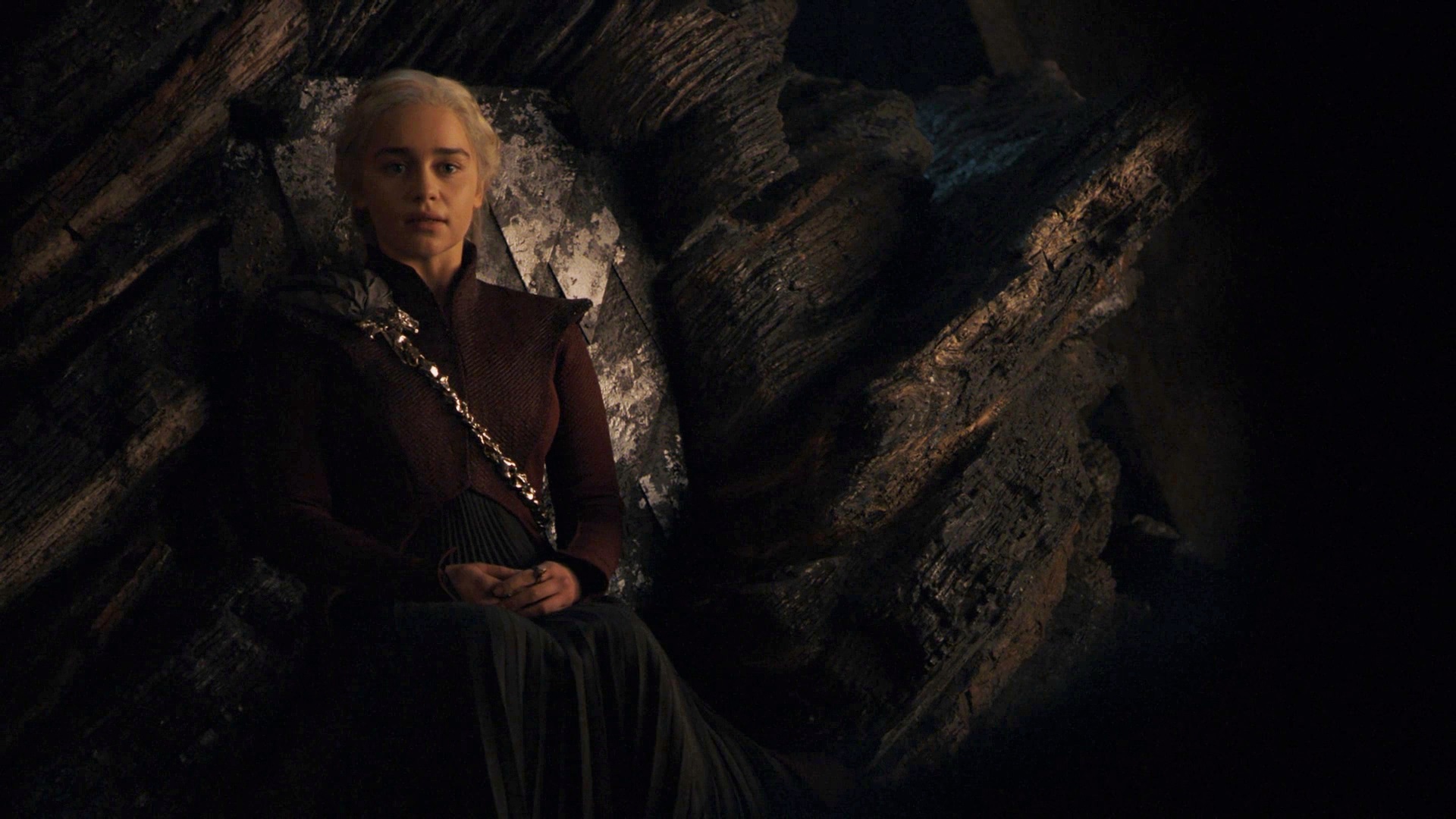 This coat, of course, is preceded by the red ensemble she also wore last week. Once again, she’s making a case to Jon and testing his loyalty and his love. She also wears it in the Dragonstone throne room addressing Tyrion. It’s become her formal, authoritative outfit and this time the deep red alludes to the fact that she’s out for blood.

Cersei also becomes another version of herself by the time she meets her end. Yes, it’s the same red velvet dress that she wore in the last episode, but with a few key, meaningful differences: she isn’t wearing any of the armored elements and, most notably, she is without her crown for the entire episode. 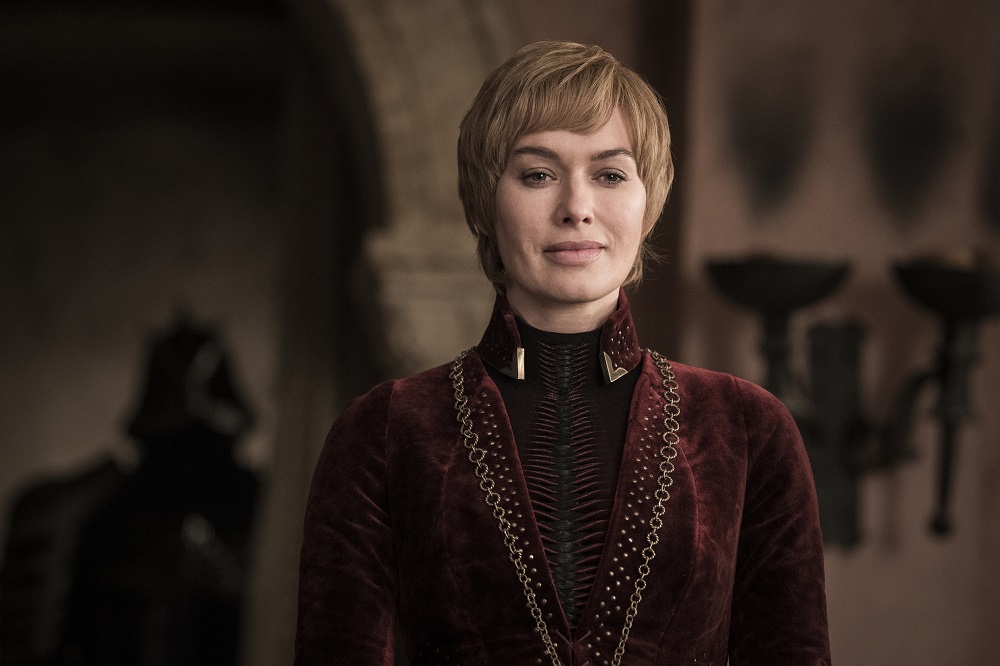 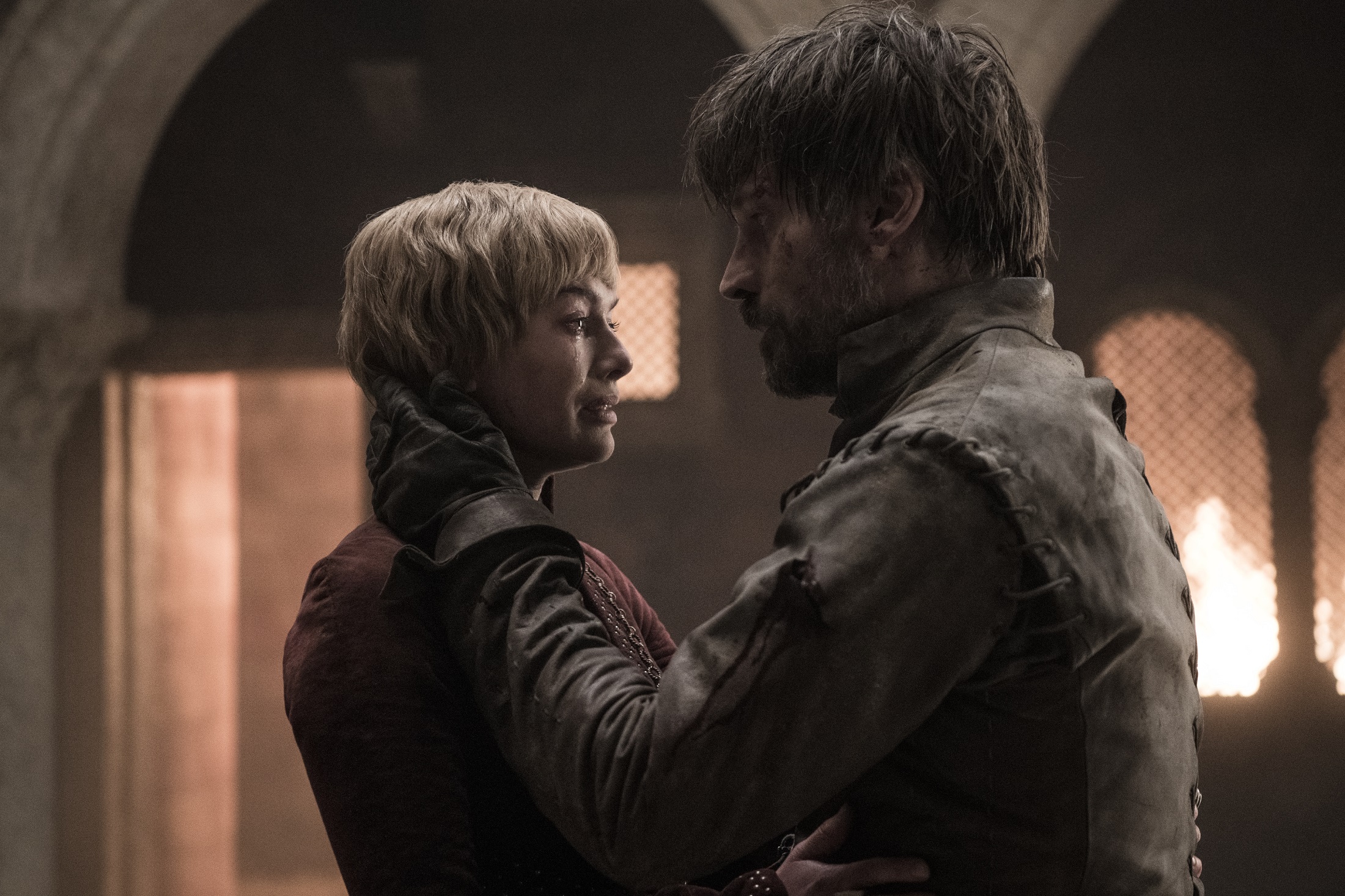 Her metal epaulettes and extra chains are removed, leaving only her gold Lannister necklace, which makes her an embodiment of her house: red and gold. No silver crown or full-body black, which is almost visually marked as an end to that era of her life the minute she leaves the Mountain (who is in his silver and black armor) and flees for her life. The shape of the dress and elements in the detail are tied with her rule over the past two seasons, but in the end, she’s no longer the cold, calculated queen that she fought so hard and so ruthlessly to be. While velvet is a weighty, royal fabric, it’s also soft to the touch, and will carry any marks and bruises it’s subjected to forever.

Cersei’s clinging to the only two things she has left: Jaime and their unborn child, their love and legacy, golden lions on a cloth of red. As the walls of “everything she holds dear” come crashing down around her, Cersei is seen stripped of her power, literally and figuratively, leaving her crushed and buried by the very symbol of that power. 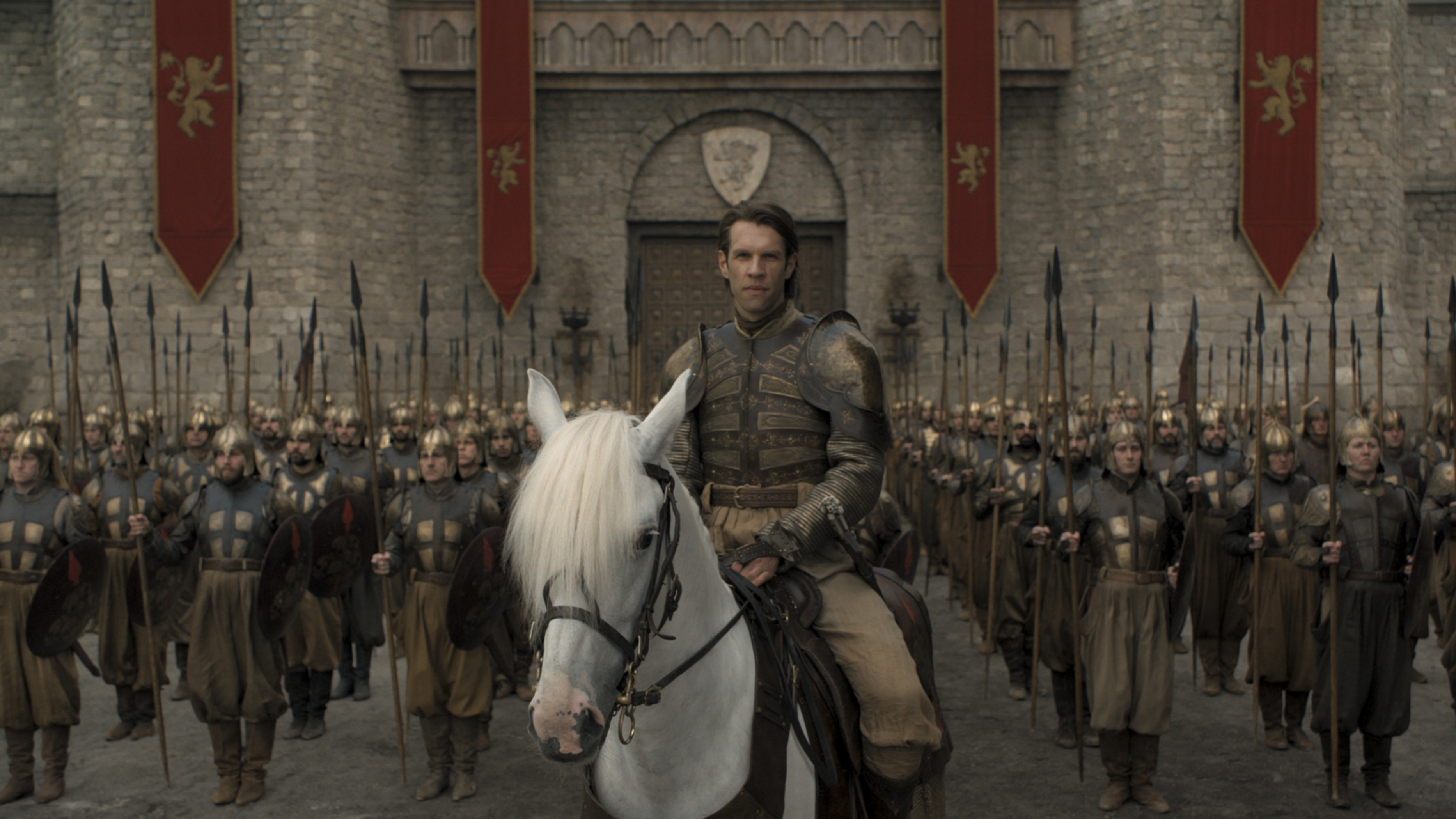 The Golden Company definitely has some interesting armor to discuss, but I’m going to save that for the mass armor article I’m planning once the series has concluded…but feel free to sound off in the comments!