Game of Thrones Fandom-Wide Survey, Part 4: Episode Ratings! | Watchers on the Wall | A Game of Thrones Community for Breaking News, Casting, and Commentary 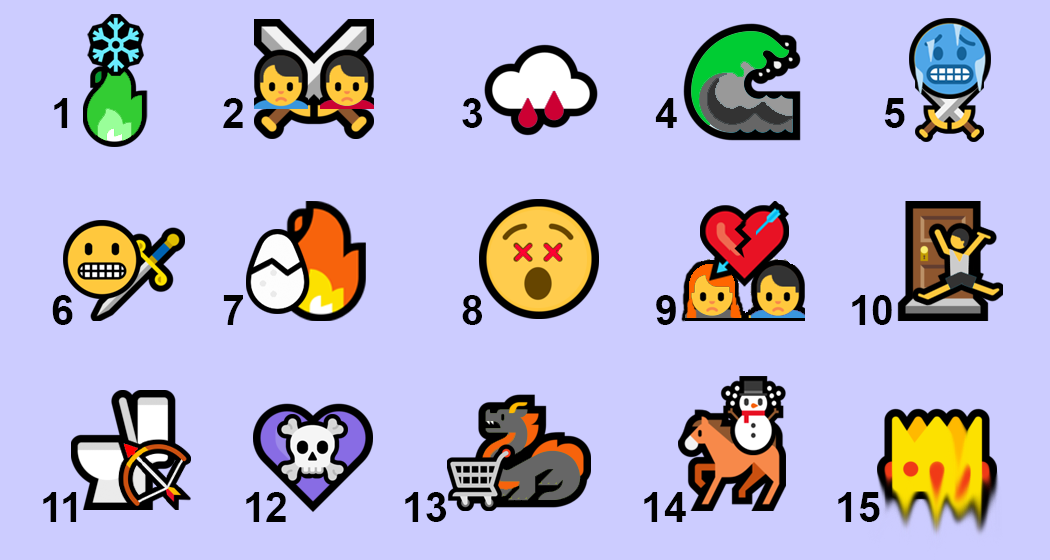 We’ve reached the thrilling conclusion of our survey results! In Part 4, we’ll learn how respondents rated each of Game of Thrones‘ 67 episodes. We’ll also take a final look at differences in how men and women (and other groups) see the show.

If you want to have some fun, the 15 top-rated episodes are represented above, emoji style. They may involve the episode’s name, an episode plot point, or both. Some require more interpretation than others. A couple may require too much interpretation entirely. (David Rosenblatt successfully vetoed the very confusing original image for No.1.)

Note this is “rating” episodes as opposed to “ranking” them — the rankings below come from the average rating. Got that?

There are many other “1 to 67” rankings out there; many are based on the opinion of the writer or of a small group of people. At the other extreme is IMDB, where thousands and thousands have rated episodes. However, there’s no way of knowing if someone has voted multiple times, or when the votes occurred (Right after someone watched? Months after, when they happened upon the IMDB site?), or how a respondent chose which episodes to vote for.

Which is not to say other lists are better or worse than the below. They were just largely compiled in a different manner.

So, let’s get started. These are listed in reverse order, and the charts show the overall rank; season, episode and title; average rating on the 1 to 10 scale; and the episode’s rank among the 10 (or seven) in its season. Each season has a different background color. 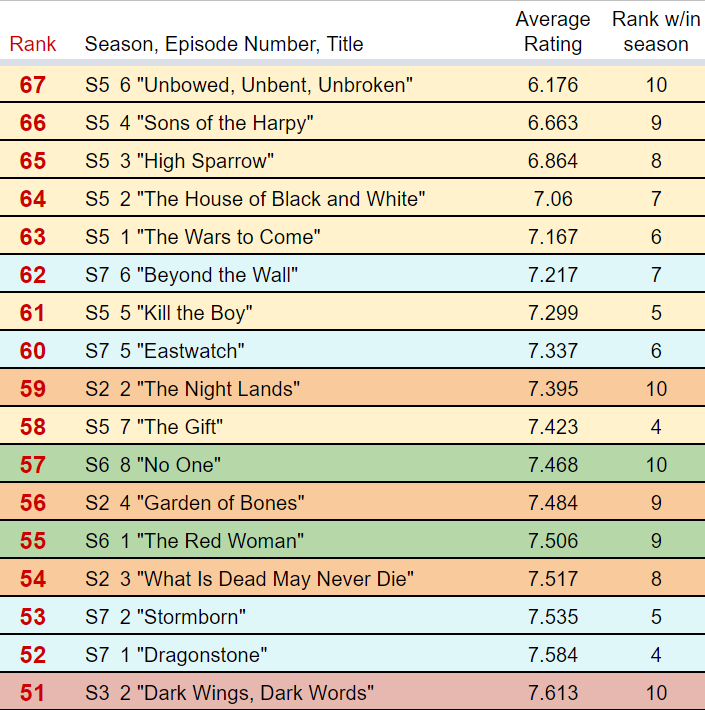 So yes, that’s seven episodes from Season 5 in the bottom section alone.

Petra: It’s no surprise which episode is No. 67. But it’s interesting how many episodes including crowd-pleasing moments are listed here. Arya poisoning the Freys in “Dragonstone” was received well, as I remember.

Here are the next 15 episodes, including the  bottom-rated episode from what we learned in Part 1 was the top-ranked season (Season 1): 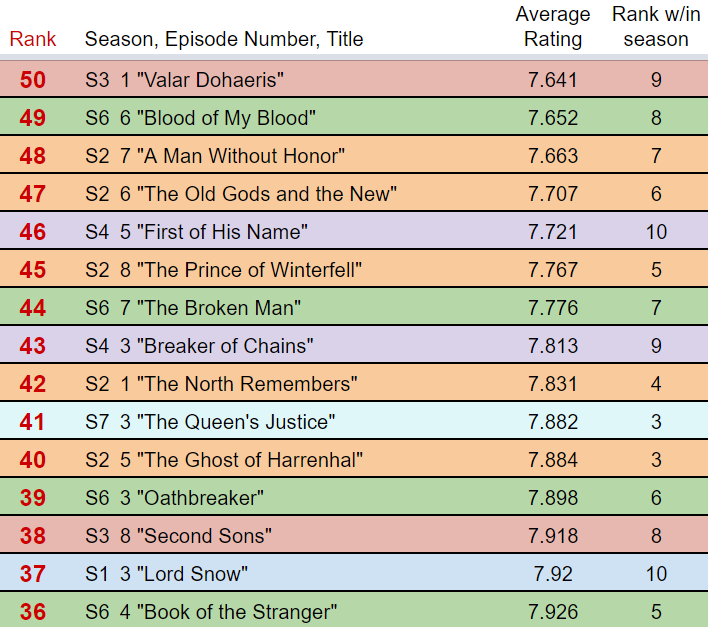 We’ve blown through eight of the 10 episodes from Season 2 now. It’ll be a bit before we see the remaining two.

Petra: I expected “The Broken Man” to rank higher, given that the Hound’s return was so well-received. 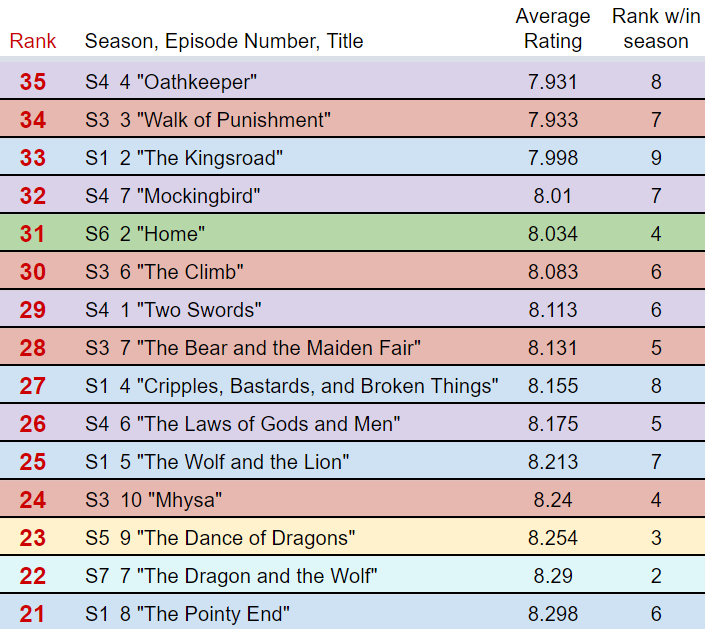 Petra: I’m always interested in whether people rank episodes by individual favorite scenes or by the episode as a whole. Going by this list, it seems to be the latter (which I suppose is fairer). The fact that “The Bear and the Maiden Fair,” which contains the fan-favorite rescue scene, ranks in the middle surprises me.

We’re up to the top 20! Should we take a commercial break? No? Okay… 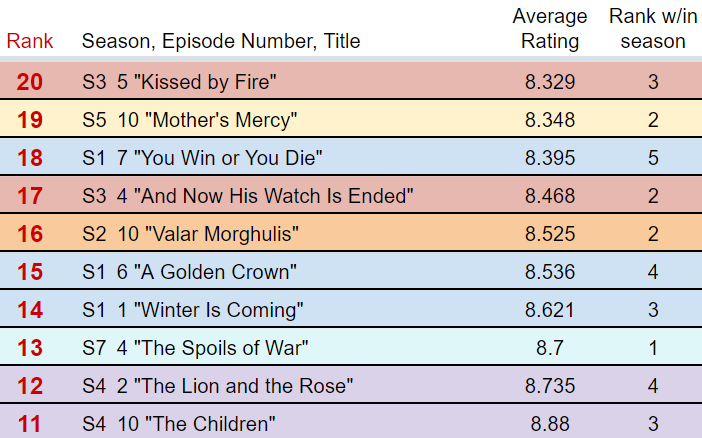 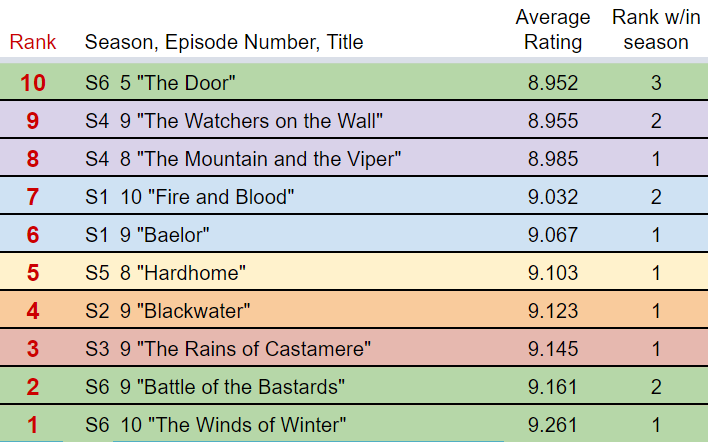 Is “The Mountain and the Viper” a relative outlier in this ranking, versus other Top 67 lists? I feel like it’s often seen as a second-tier big-time episode, not an all-timer along the lines of “The Door.”

Petra: There’s a fair balance of different seasons (sans Season 7) in the top 10. No surprise that “The Winds of Winter” is at No. 1.

Views on the top episodes differ based on if the person read the books or not — to a point. Interestingly, “book first,” “show then book” and “show only” respondents all had the same top 11 episodes, but the order differed. Here’s a look at that. 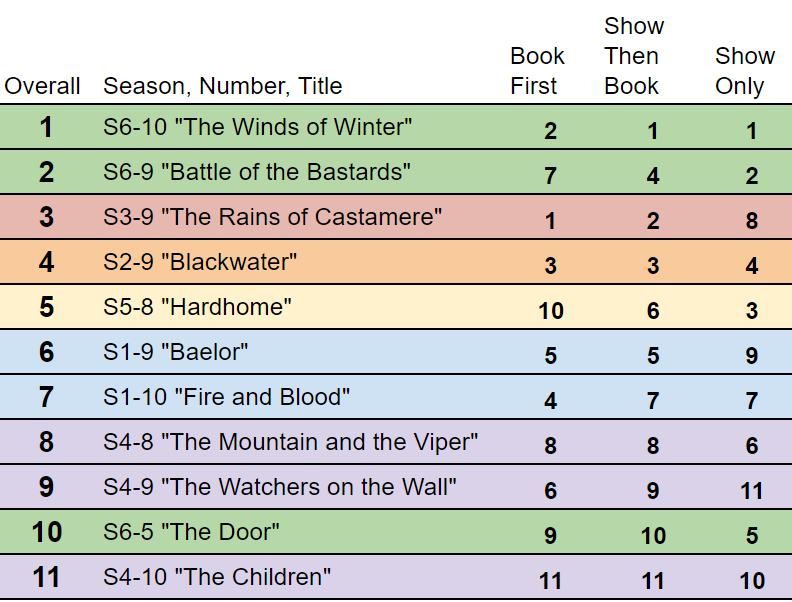 Petra: It makes sense that, since “Rains of Castamere” brings one of the most famous scenes from the books to life, book readers would favor it — while show-only viewers prefer the Season 6 finale that delivers so much wish fulfillment.

Looking at the series as a whole, the per-episode viewpoints of “book first” and “show-only” viewers diverge over time. The chart below shows that the groups had nearly identical average ratings (8.41 and 8.37 out of 10) for Season 1’s episodes. But the most recent three seasons see a much larger gap, with consistently higher episode ratings from show-onlys. 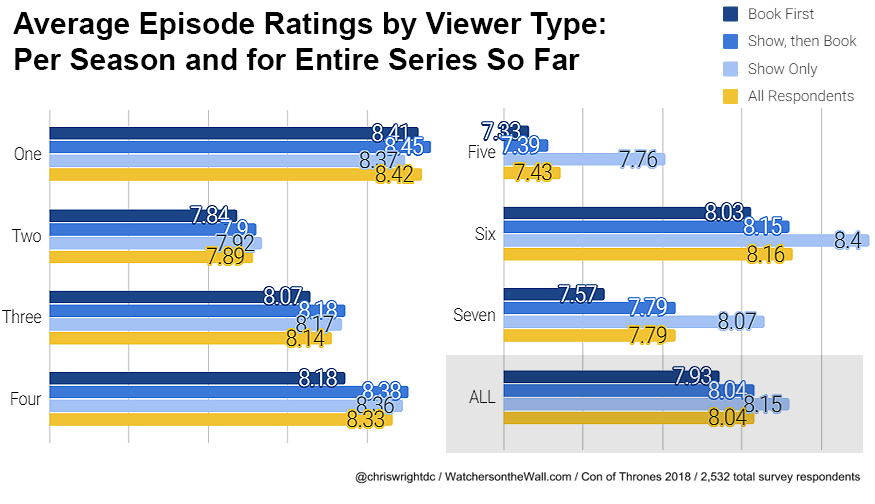 Our respondents were consistent. Remember those season rankings from Part 1? They went 1-4-6-3-2-7-5. If you instead rank the seasons based on their average episode rating (the yellow bars above), you get the same order.

Looking at individual episodes, the 10 below had the biggest difference in ratings among the three groups. No surprise that all are from the past three seasons: 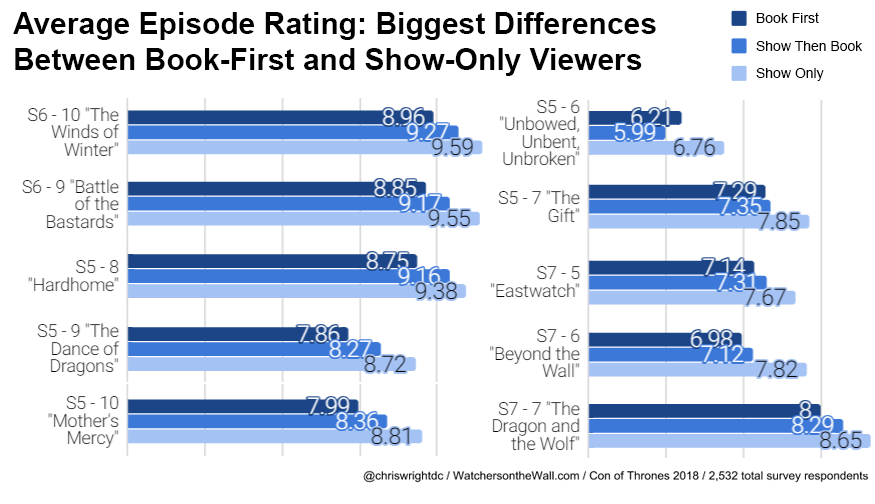 These results are a bit skewed since overall, show-only viewers gave out higher ratings. So we can also look at how far apart episodes were ranked, based on those ratings. For instance, “The Kingsroad,” Season 1 Episode 2, was ranked 26th by book-firsts and 38th by show-onlys despite having virtually identical ratings from the two groups (8.01 and 7.98).

Here are the 10 episodes with the biggest gaps in ranking, as opposed to rating. On the left are those ranked more highly by show-only viewers; on the right are those favored by book-firsts. 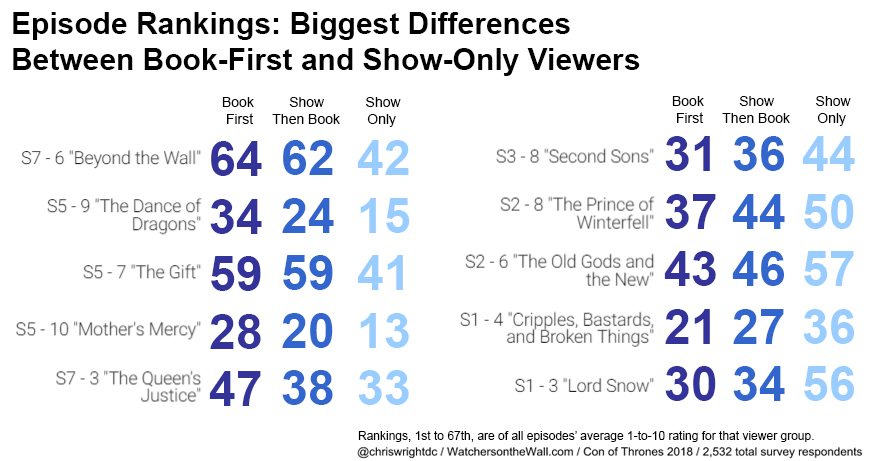 If the episodes on the right seem somewhat random, that may be because they are from early seasons.

All right. Time to take a deep breath and venture into one final look at overall results…

Game of Thrones is viewed by people of every age, race, gender identity and political orientation out there. And it’s worth pondering if different groups of people absorb and consume the show differently. (Hint: They do.) But before proceeding, let us recall this nugget from Part 2.

“It’s easy to overinterpret demographic results such as these. Most will fall into one of three categories:”

The same certainly applies here. But let’s take a cautious look at the starkest differences across demographic groups when it came to survey responses. 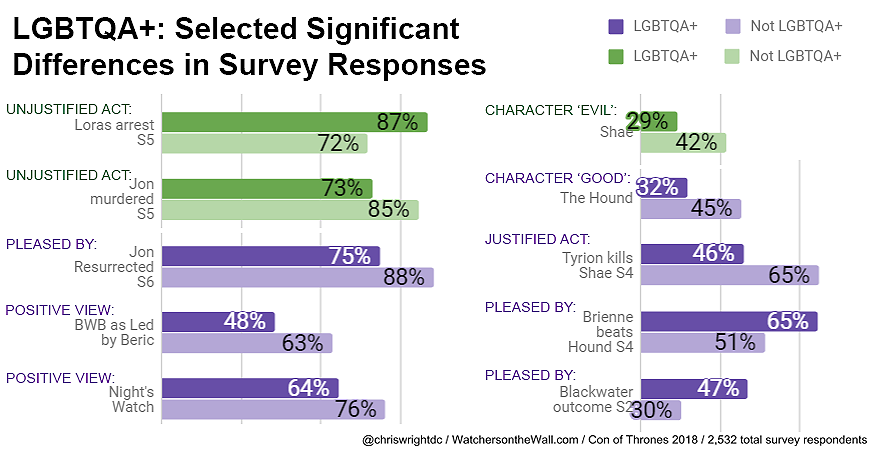 Nearly nine in ten LGBTQA+ respondents saw the arrest of Loras as unjustified. They appear to have an affinity for Shae — look at that 19-point difference regarding her murder — but the Hound not so much. There are also potentially “WTF?” results regarding Jon Snow and the Night’s Watch.

There was a consistent gender-based response to the death of Renly. Note that men were also more pleased by Stannis’ defeat of the Wildling army. (By the way, “Nonbinary” or a blank to fill in were also options for the gender question; not enough did so to attempt using in this breakdown.) 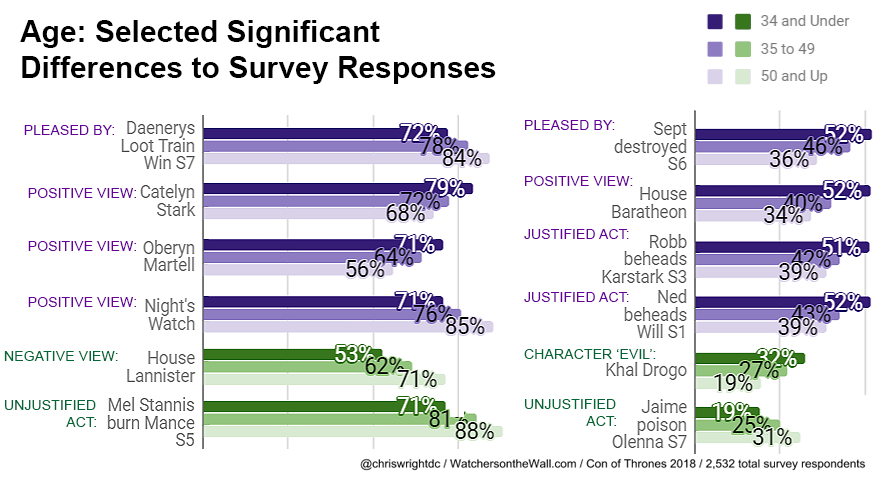 The three age categories let us look at the most significant trends. Younger respondents appeared to find violent acts more justified across the board. The only statistically significant exceptions, which aren’t listed above due to the smaller margins, were Dany burning the Khals and Brienne killing Stannis. In both cases age 50+ respondents found the acts more justified than those age 34 and under, by 9 and 7 percentage points respectively. 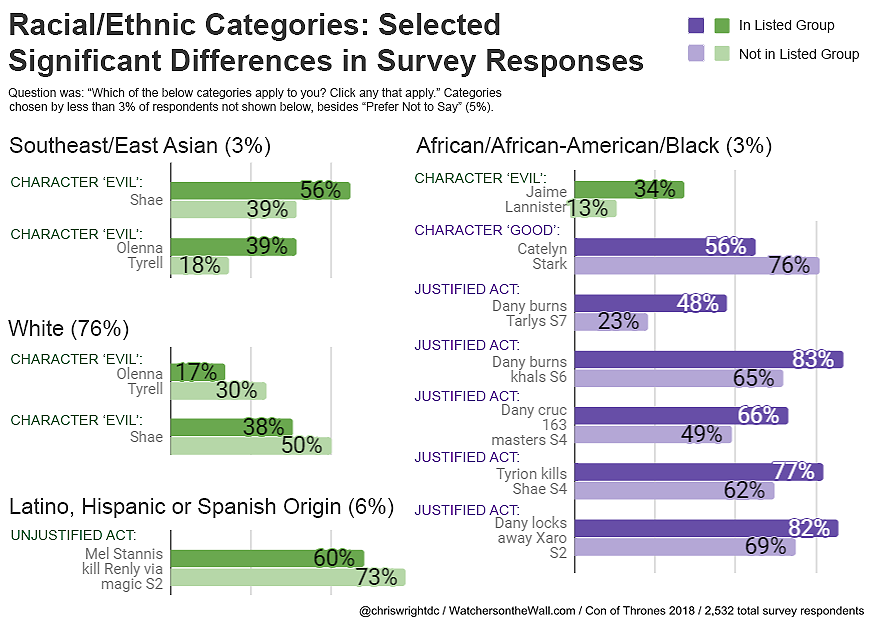 This was a difficult question to parse, since respondents could of course check more than one box, and a large majority selected white, with other racial or ethnic groups individually getting relatively little representation. African/African-American/Black respondents had more big differences, and most of those focused specifically on Dany, whose actions they consistently found more justified than others. The nearly 25-point difference on the burning of the Tarlys is the third-widest demographic difference in the entire survey.

North Americans appear to be bigger fans of Brienne than those elsewhere in the world, and Europeans are a bit more fond of House Lannister and seem to be less enthused by Dany. What say you, Luka Nieto?

Wrapping Up: Viewing in a Vacuum

We’ve looked a lot at how the survey has illustrated differences in viewpoints between book readers and show only-viewers. Part 1 reviewed how the groups see the show’s seasons and plotlines, for instance. You can refresh your memory on that with the chart linked here.

The survey also asked how often respondents talked to others (online or in “real life”) or read about the show, both in season and when it’s not airing. From those responses, I created three groups, from little interaction to high interaction. By looking at survey results across those three groups, we can see how groupthink might play a role in how people perceive the show:

The act of discussing and reading about Game of Thrones appeared to affect perceptions of four of the 10 plotlines we measured (see Part 1 for full results on those questions). Those who spent, say, an hour or less a week interacting regarding the show had more positive views of the Dorne plot and Season 7’s wight hunt and Winterfell scheming. On the other hand, they were less positive about the “Theon as Reek plot,” which those with high participation in Game of Thrones discussion liked more.

Petra: I’ve found from my own involvement in the fandom that a lot of fans warm up to Theon’s story by learning of the varied opinions other people have of the character. Those who don’t discuss him with others tend to have a more straightforward “rat bastard” opinion of him. So, I appreciate that the stats support my own anecdotal evidence.

We can go one step further, and look at the smallish group of respondents who A) have not read the books and B) interact very little with others about the show. This is as close as we can come to some sort of laboratory environment where there’s no outside bias seeping in.  Here are the biggest differences we saw with “isolated” viewers. Look to bottom right for some true chasms: 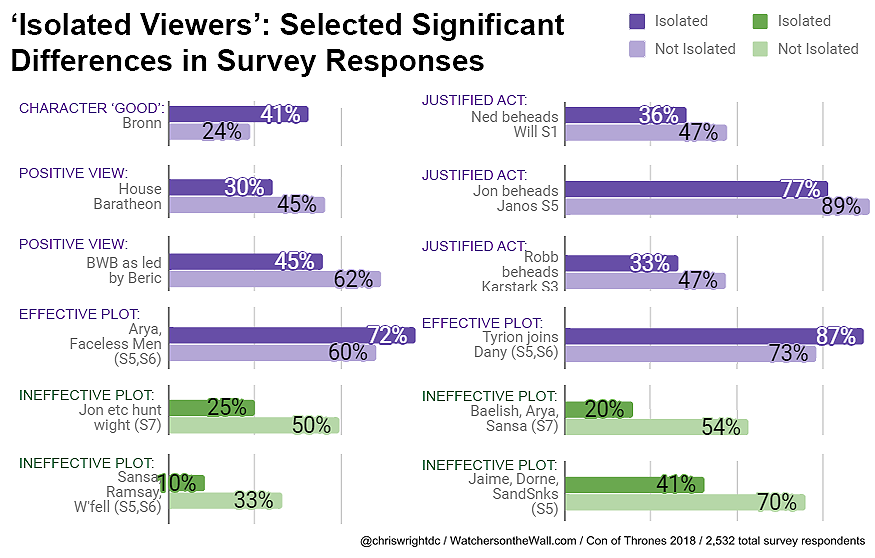 The Season 5 Dorne plot, by far the most maligned overall, was nonetheless seen as ineffective by only 41 percent of these viewers in a relative vacuum, compared with 70 percent of other respondents. And we see differences of more than 20 points for three other measured plots.

That’s it! Special thanks to Petra, for assisting with the survey questions and co-hosting the Con of Thrones panel on the results, plus of course offering her thoughts for these posts. And thanks to Sue the Fury for her patience, as I waded through mountains of data (plus Watchers Patrick and David for QA’ing some things).

Further exploration of how those who haven’t read the books and don’t participate in online discussions see Game of Thrones differently may be in order … but that can be someone else’s endeavor!