Game of Thrones Season 5 sets in Split and Klis appear ready, while there may be trouble for production in Dubrovnik | Watchers on the Wall

Some of our Game of Thrones cast and crew have descended on Los Angeles for tonight’s Primetime Emmy ceremony, but preparations for Season 5 continue in Croatia.

Our latest look at the new set in Split reveals some darker colours than most of us anticipated, and the installation of an overhead green screen.

Preparations at Klis Fortress look to be nearing completion as well, with all of the beams securely in place.

Filming of the Meereen storyline will likely be first up when the Croatian leg of filming commences later this week. Our sources tell us that Unsullied extras have been confirmed to be working from August 28th – September 2nd, and again from September 8th – September 16th. We’ve also received word that slave extras will be filming on September 5th and 6th.

While Split and its surrounding areas seem ready to roll, preparation in Dubrovnik may have hit a road bump. WotW reported in late June that HBO had asked permission to shoot a particular scene in the streets of Dubrovnik, and according to a new report from TMZ, permission has not yet been granted.

Spoilers ahead, read on at your own discretion. 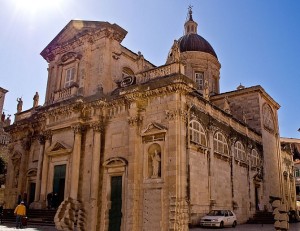 The scene in question would have included a naked actress accompanied by about 500 extras walking from Dubrovnik cathedral to Sponza Palace. According to TMZ’s sources, the Church of St. Nicholas is strongly against the scene, which they perceive as a public display of sexuality, and the local film commission will not give production a permit to film.

While it’s not hard to believe that the film commission and city officials would stand behind the church, this new information does come from an un-cited source, and has not been confirmed.

The Church of St. Nicholas lies roughly 60 meters north of the end point of the walk, Sponza Palace, so it is possible that the church raised concerns about the production of such a large, and let’s face it, touchy, scene being filmed in close proximity.

This could also explain the confusion about the numbers of extras reported to be working in Croatia by Embassy Films over the weekend. With 1,000 extras in total, and 750 in Split, the number initially reported to be used for the walk didn’t quite fit in.

TMZ also claims that producers have not yet found a workaround to the problem.