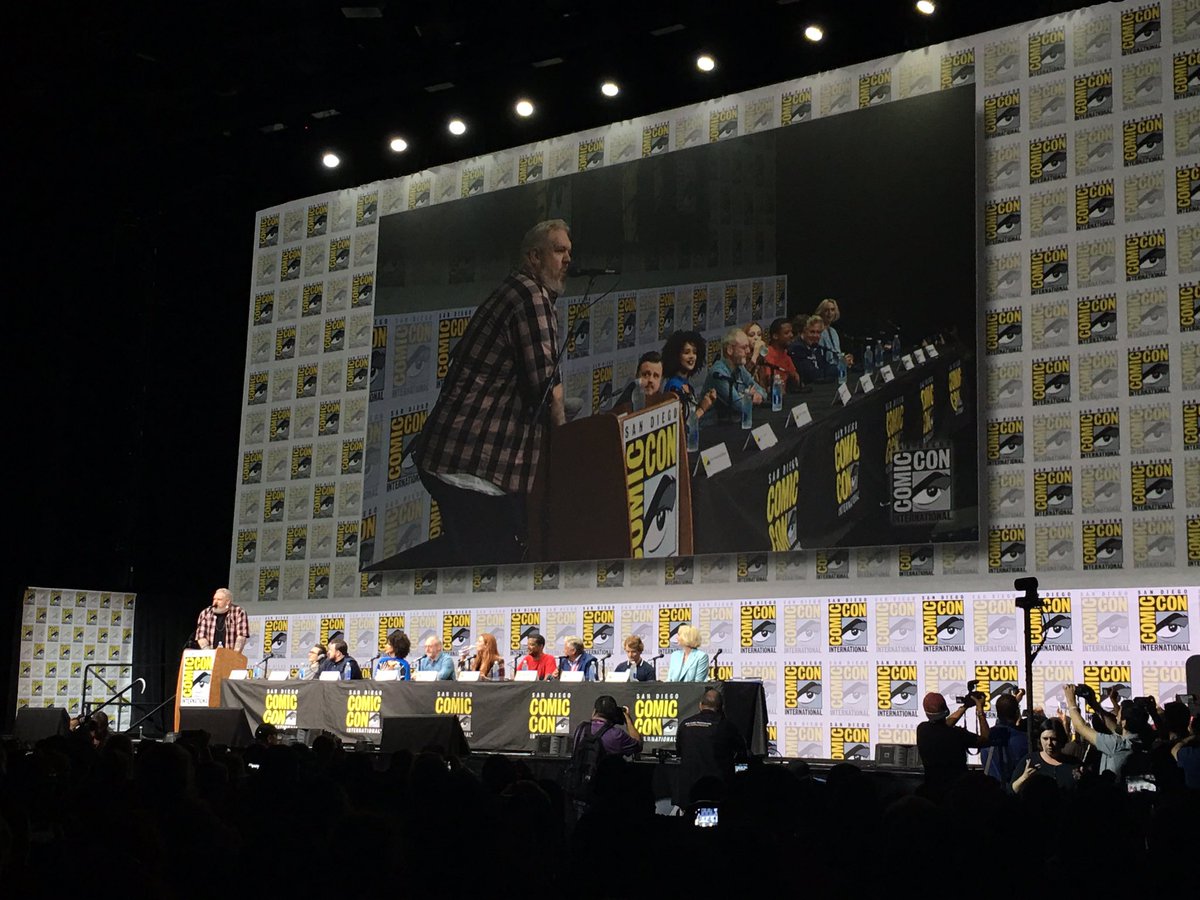 The cast has come and gone, a new trailer for season 7 has dropped, and the dust has settled on the Game of Thrones panel at San Diego Comic Con once again. Every year GoT is one of the hottest tickets in Hall H, and this year was no exception. There were no major news releases this year, since the new season has already premiered, but along with the trailer for upcoming episodes, audience members were treated to a fun-but-light-on-content panel moderated by a beloved former cast member, Kristian Nairn– Hodor himself. Cast members on the panel included Isaac Hempstead Wright (Bran), John Bradley (Sam), Nathalie Emmanuel (Missandei), Liam Cunningham (Davos), Sophie Turner (Sansa), Jacob Anderson (Grey Worm), Conleth Hill (Varys), Alfie Allen (Theon) and Gwendoline Christie (Brienne).

A few highlights: in a clip from Flicks and the City, the cast reveal who they wish hadn’t been killed.

At the end of the panel, the cast took a few questions from the audience…including the Night King.

Gwendoline Christie addresses the differences (and similarities) in being a part of Star Wars and Game of Thrones both.

Polygon has a few notes from the panel as well.

Gwendoline Christie was asked about the much-discussed Tormund/Brienne dynamic, and the actress had this to say.

“What I love about Brienne of Tarth is that I don’t think at the foremost of her consciousness is a value system based on how men appreciate her…But who doesn’t like being appreciated as both really? But I don’t think that’s what she’s invested in at all. I think she’s finding it incredibly awkward.”

In one interview, EW spoke with Christie, Cunningham, Bradley, and Hempstead Wright after the panel. Christie teased changes we may see in her character over the next season.

“I think we’ve seen Brienne being an incredibly honorable character, but one who has operated from a received sense of what honor is,” Christie added. “And now in the world, it’s not at all as she expected, and no one’s clear as to whether they’re good or evil. And that gray area means that there’s an increased decision-making process that happens moment to moment.”

The actors had much more to say on topics including the reality of the Citadel and endgame motivations in the EW video.

In another interview, EW talked with Anderson, Turner, Allen, Emmanuel and Hill.

After their panel, the cast headed off to spend time doing autographs for fans at Comic Con.

It’s all smiles with Conleth Hill at the #GoTSDCC autograph signing at #SDCC2017. pic.twitter.com/c1H4OHIpt2