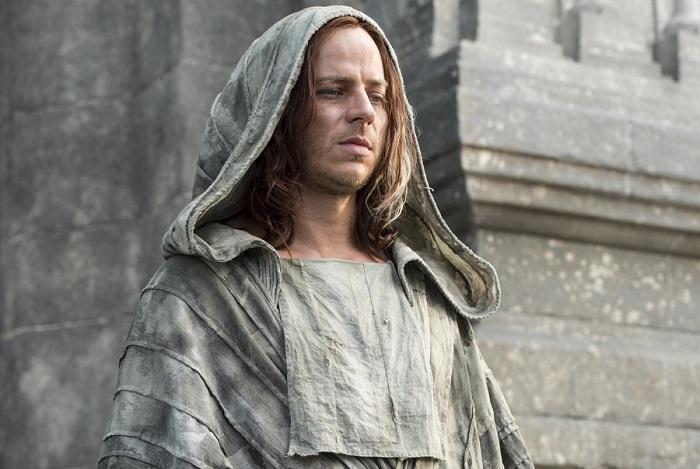 An exciting episode of Game of Thrones saw an unexpected return and a host of events building on the drama of the season premiere. “The House of Black and White” brings us a batch of new interviews today, examining the rejections and returns.

First things first, make sure you check out our brand-new exclusive interview with Brienne of Tarth herself, Gwendoline Christie!

Christie also spoke with Entertainment Weekly about the events of last night’s episode, and the fateful meeting at the inn.

“Brienne kneels before Sansa in an exact mimic of the oath she made to Catelyn Stark,” the actress says. “And Sansa says, ‘No.’ But in the script, it says there’s the tiniest look in Sansa’s eyes. The script says the look is telling Brienne: ‘Get the f–k out of Dodge.’” 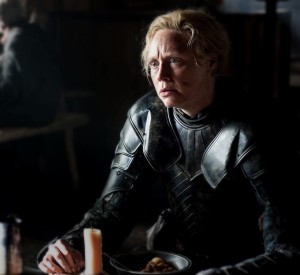 “We can be romantic about it and say that, in that moment, maybe there’s a connection, some part Catelyn that’s within Sansa, that’s trying to help me, to urge me on,” Christie elaborates. “And then there’s the horse chase, which we filmed over days. Really high-speed horse chase, through the forest, rearing the horses. Daniel Portman—Podrick —is a brilliant rider and had to fake being a terrible one.”

Christie talks about telling her castmates about getting cast in Star Wars: The Force Awakens and more so check out EW for the full interview.

EW also talks to last night’s big surprise returning actor Tom Wlaschiha. (Well, it was less surprising for those of us avidly following casting spoilers.) The German actor dishes on quite a lot so here are just a couple of the high points.

“I thought it would be fun to start the new season with a different vibe. Even though she’s found him, she’s grown up and is much more conscious in her choices. So he is going to teach her, as promised, but he is not going to make it easy for her. We will learn different sides of Jaqen and how the whole group at the House works.”

On his feelings for his protege and his plans: “He definitely cares about Arya. But the question is: If he’s hiding it and why is he hiding it? Is it part of a bigger plan? And we still don’t know why he surfaced in first place. He was a prisoner in King’s Landing. Why was he there? Was it all part of a bigger plan and, if so, who is behind it? I like that his character is so mysterious.”

Wlaschiha also was interviewed by Access Hollywood, where he discussed the filming of his return.

“We shot pretty much in order and… Episode 2 was the first one we shot in Croatia. Basically, when the kindly man changes into me, thankfully,”

Tom talks about learning he’d be coming back to the show, and how it put him in a daze while out with a friend shopping.

“I was walking just aimlessly, just listening to him and when the call was finished, I was looking for my friend to tell him the news, and then I couldn’t find him for five minutes because I’d gotten lost in the store.”

What was important to me personally was that we’re not picking up where we left off in season two, because in season two she kind of had the impression at the end that they were friends,” he noted. “So I thought it would be really interesting to show a different side of Jaqen now that she finds him again — he will still teach her, but he’ll be more demanding, and I think that goes very well with Arya’s journey from being a little girl to becoming a young adult. Jaqen knows that now he can ask more of her, and he’s not gonna make it easy on her.

It seems apparent from all of Wlaschiha’s interview responses about the evolution of Arya and Jaqen’s relationship that he interprets his Faceless Man as the same Faceless Man who was Jaqen H’ghar in season two so I think that answers that question.

HBO/MakingGameofThrones has a new interview with Conleth Hill up, delving into Varys’s connection with Tyrion.

Hill says of the characters’ relationship, “There’s a fondness and a mutual respect – a recognition that they’re both survivors who both have been persecuted all their lives because of how they are, as opposed to who they are. We know from past episodes that he thinks that Tyrion would be a very, very useful member of a council or a Hand of a King. He admires his political prowess and, equally, his compassion.”

And does Varys really care about Tyrion’s well-being, they ask?

Hill responds, “I think the only person who can help Tyrion is Tyrion. Varys is kind of enabling, making sure that Tyrion stays safe and hoping that he recovers and turns a corner. But I think there would be something wrong if someone who just murdered their father and ex-girlfriend suddenly got over it.”

To celebrate the arrival of Dorne on the scene, this week HBO brings us a bonus video on Dorne and the Water Gardens with interview segments from the cast and behind the scenes footage.

In this week’s Inside the Episode, David Benioff and D.B. Weiss discuss Doran’s inaction and his difference from Oberyn, Kevan’s challenging of Cersei at the Small Council and Dany’s choices regarding Mossador’s actions and the law.

Nikolaj Coster-Waldau and Lena Headey share their thoughts on their characters’ reactions to the threat against Myrcella in last night’s episode.