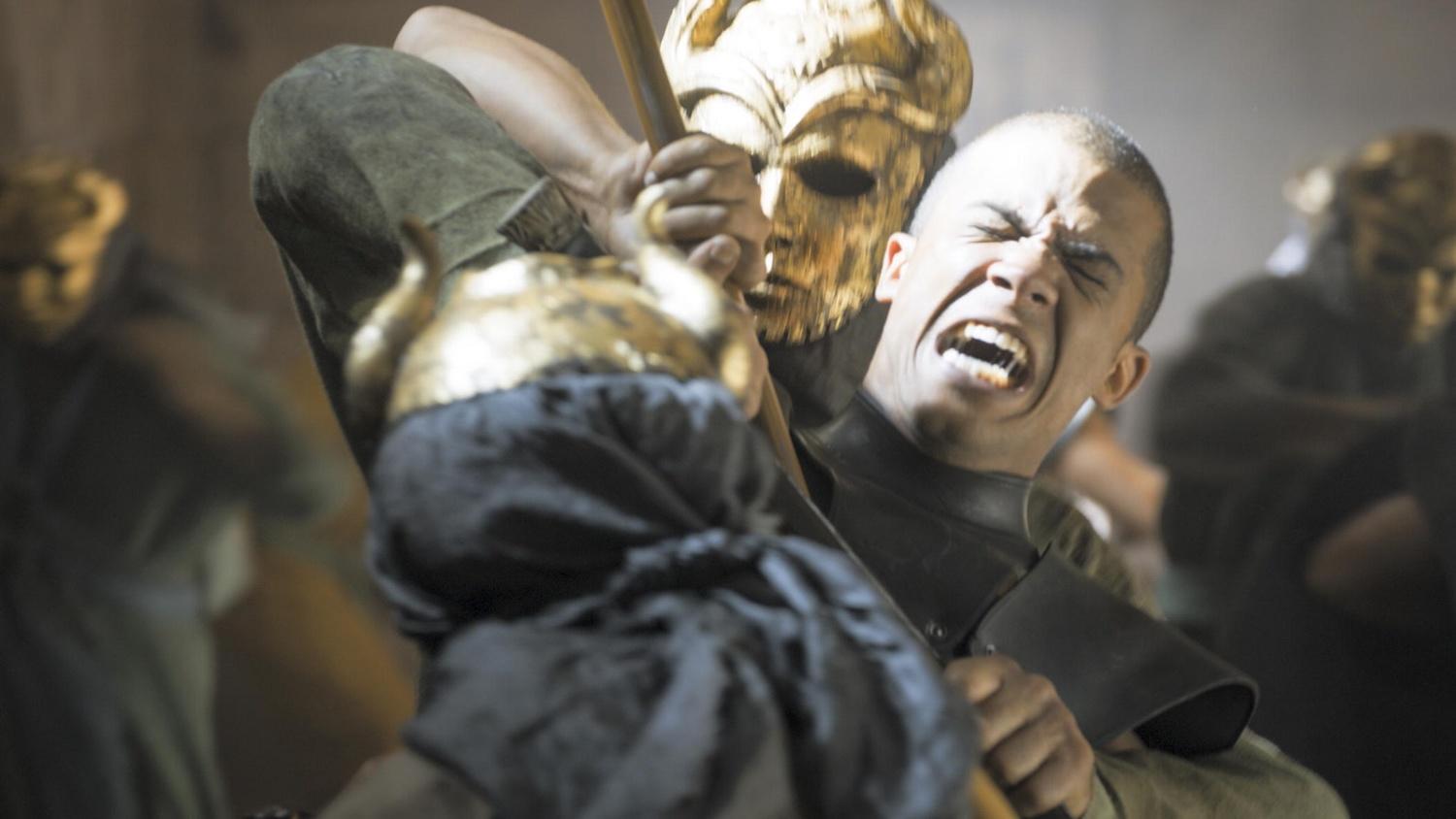 Last night on Game of Thrones, “Sons of the Harpy” threw down hard with major moments and the expansion of the Dornish contingent.

Several new interviews and videos offer insight into the episode, but be warned, SPOILERS are coming!

Ian McElhinney talks to Entertainment Weekly about the shocking exit of Ser Barristan Selmy, a character still very much alive in the novels.

Selmy’s death at the hands of the Sons of the Harpy after fighting his way through a pack of them has left many fans of the books shaking their heads. McElhinney himself admits to being “disappointed” but adds that “I think you have to accept—as I have accepted—that the demands of TV are different than the demand of book writing. With TV there’s a pressure to create a number of high points.”

He names several of his favorite moments on the show:

One of my favorite scenes up until this point was the scene where he [tells King Joffrey in season 1] “to hell with this” and storms out. I enjoyed shooting that. I would have liked to work more with people like Lena, for instance. I find it extraordinary I’ve gotten to this stage and never met Peter. The scene where I leave Daenerys and end up in the fight and get killed, it’s a lovely scene and a lovely set up for what happens. It’s very well written, I’m very happy with the way I’ve come to an end.

Check out EW‘s article for the complete interview.

McElhinney and his co-star Jacob Anderson spoke with TVGuide about the big fight scene, with the men sharing how they created the sequence in the narrow area where the Sons of the Harpy trapped Grey Worm and Barristan.

Anderson says, “It was really hard, which why it was good to practice in my flat, at home actually. The first year on the show, I did the same thing because we had quite a long corridor in our old flat. It’s quite good to learn that way. This year, that corridor was tiny. There was like no space, there was barely space for the spear. You could probably have two spears in terms of width on that set. So me and all the Unsullied guys and the Sons of Harpy guys had to be really careful with each other. I’m sure I actually caught a few Sons of Harpy, in fact, I know I did.”

He also says that they wanted the fight “to feel scrappy and they wanted it to feel like they were being ambushed.”

McElhinney explains that there was a stuntman there for him, if needed. “But the bottom line is that nobody ever wants — they don’t want, you don’t want — for a stunt person to be doing the fight for you. You want to get to the stage where you’re doing it yourself. They want that to happen too. It’s always much more believable and much more effective when that happens. So we didn’t need to use a stuntman to cover any of the moves, and that’s all to the good.”

The interview has a lot of good discussion so visit TVGuide.com to read the entire article. 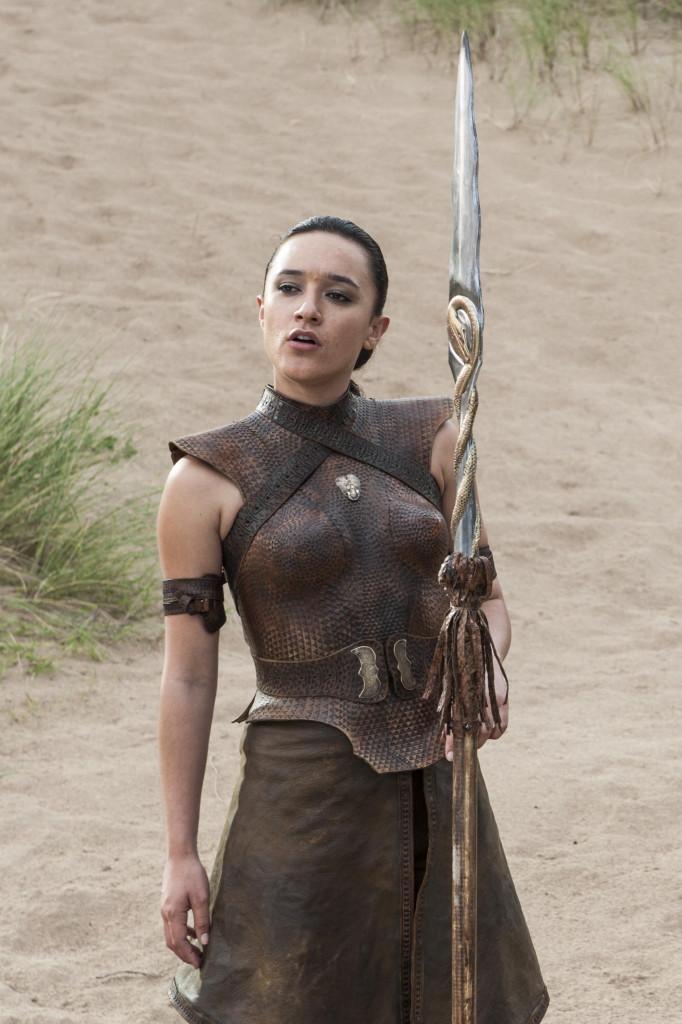 The Sand Snakes made their big debut last night, and Keisha Castle-Hughes discusses it today with Variety. She describes her character Obara as “very unemotional in comparison to the rest of the Dornish people,” and as the leader of the Sand Snakes.

Castle-Hughes feels the connection between Obara and Nym is most significant.

And you see from the get-go that Nymeria does nothing unless Obara gives her approval. And they’re a really wonderful duo because Obara reacts off of instinct and is very reactive, and even though she’s unemotional about it, she doesn’t have a rational bone in her body. Nymeria is much more rational and might try to think of the long game, and Obara needs someone like that in her life. In fact, Jessica — who plays Nymeria — and I had set up this backstory that Nymeria was literally the only person in the world who could tell Obara no, and she probably wouldn’t take it lightly but she’s the only person that she could ever take advice from.

Keisha reveals that while she trained with Wushu techniques, she also used her knowledge of working with a Taiaha, a Māori weapon that’s similar to a spear.

See what the actress had to say about Jaime Lannister and Pedro Pascal at Variety.com. 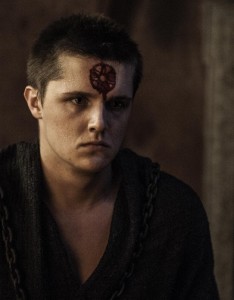 The recently returned Lancel Lannister, Eugene Simon, talks to Terri Schwartz at Zap2it and makes it clear Cersei should be more worried about her cousin-lover.

“I think that he has a list, most certainly, but I do think that she is the rib-eye steak on that list,” Simon says. “A good way of understanding how intimately he is aware of her methods and her choices is even in the first scene that we ever see Lancel meet Cersei; the fact that she’s on that balcony having her wine and the fact that he knows where to find her just demonstrates the extent to which their old, intimate life would have given him knowledge of what she does when she’d wants to be alone. He knows that.”

Check out the full interview over at Zap2it.

Alan Sepinwall over at Hitfix has an interesting piece talking with show producer Greg Spence about just why Game of Thrones seems to make odd choices about what locations do- or don’t- appear in the opening credits.

Basically it boils down to money and time.

It would be untenable, both from a production point of view, and probably from a cost point of view, to make a completely customized 3D animated, 90 second sequence before every single episode. That would be a tremendous financial and creative burden. What you do see is a very complicated 3D build. The guys at Elastic begin working in October in order to deliver the sequences to us in February and March. So it’s quite a bit of manpower and man hours that goes into it.

He further explains that the locations sometimes represent the areas rather than the actual specific locations. “Now, we have the Eyrie, that early in the season we were associating with Littlefinger and Sansa in their trip. They’re not right in the castle, but they’re nearby when they pass Pod and Brienne on the road. So frequently, because those two are in that region and near there, even though we don’t literally go into the Eyrie, that’s the place that we chose to best symbolize where Littlefinger, Sansa, Brienne and Pod are. Until they have a meaningful interaction somewhere else, we would leave that in the main title.”

In this week’s Inside the Episode, David Benioff and D.B. Weiss share their thoughts on the Sand Snakes’ decision to join Ellaria, Sansa’s return to her Stark roots, and Stannis’s love for Shireen.

George R.R. Martin gives background on the High Sparrow and the warrior monks, the Faith Militant.