Game of Thrones Memory Lane 408: The Mountain and The Viper | Watchers on the Wall | A Game of Thrones Community for Breaking News, Casting, and Commentary 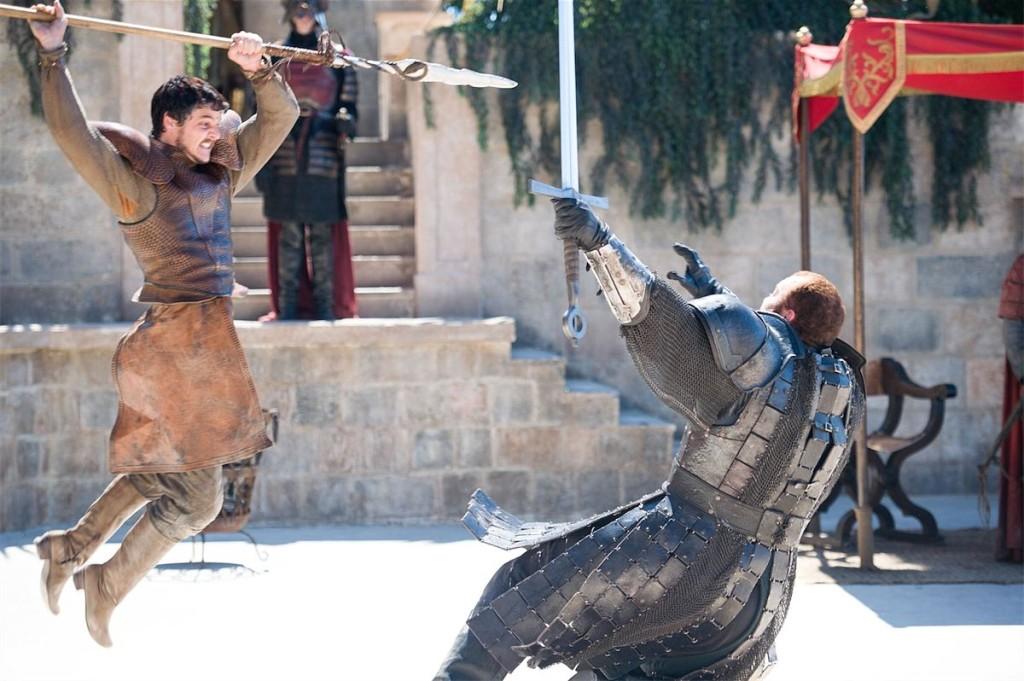 With less than two weeks to go until the new season, we bring you one of the series’ most talked about episodes for today’s trip down memory lane. “The Mountain and The Viper” was written by David Benioff and D.B. Weiss, directed by Alex Graves and premiered June 1st, 2014. It was a shock to Unsullied and Sullied alike as it depicted one of the series’ most anticipated moments which the episode was named for. This was a fantastic episode for conflict, climax, and characterization, as we’ve come to expect from the Game of Thrones showrunners.

We begin in Mole’s Town with Gilly as the wildlings further descend south towards Castle Black. The carnage commences in tune with Ramin Djawadi’s “Thenns” as Gilly takes Little Sam and hides while the townspeople are slaughtered. She is found by Ygritte who spares her and the baby and warns them to shush. 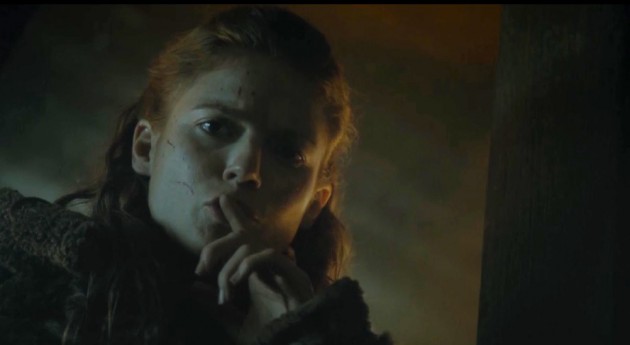 In an interview with Zap2it, Rose Leslie comments on why Ygritte spared them:

I do believe that it was the child. I believe that underneath it all, yes of course she is a scorned woman, but she is still a woman who has loved, who does still love Jon Snow, and I think the whole maternal side of that came out. Seeing this rather innocent-looking woman with her baby in her arms and knowing that she was innocent, knowing that she wasn’t really part of the fight and knowing she has nothing to do with the rampage that [Ygritte] in her head is on, which is to pursue Jon Snow and to make sure that he hurts as much as she has done in this last season. I was so grateful for being able to have the character trait that she can see that divide and not just, as they say, go on this murderous rampage and destroy everything that she sees.

At Castle Black, Sam is inconsolable and riddled with guilt as he believes Gilly and Little Sam are both dead because of him. There’s a dark irony in Sam’s choice that is luckily undercut when they’re reunited. In a way, because Ygritte spared them, her relationship with Jon gets to live on through the two even after they’re both gone. It’s nice to see that some characters still get a happy(ish) ending when such is very rare on Game of Thrones.

Outside Meereen, the Unsullied are bathing when Grey Worm spots Missandei with interest. She later confides with Daenerys where she asks the great question surrounding eunuchs:

Daenerys: When the slavers castrate the boys, do they take all of it?

Missandei: All of it?

Daenerys: The pillar…and the stones? Haven’t you ever wondered?

Grey Worm and Missandei later converse in Dany’s audience chamber and further set up a (slowly) blossoming relationship between the two. We’ll see this more in Season 5 and hopefully much more in Season 6.

In the North, Ramsay and Reek prepare to take Moat Cailin.
He mocks the Greyjoy sigil as Reek avoids his gaze.

Ramsay demands his attention to go over the plan again ensuring he remains obedient. A minute detail but avoiding eye contact while Ramsay teases the Kraken could be taken as an insubordinate effort to retain what small bit of Theon he has left. By keeping that small piece of himself, it leaves room for Sansa to help redeem him in Season 5. Sadly, the small effort is diminished when Ramsay reminds him who/what he is and for how long. He’s Reek, not the lordly, formidable, Theon Greyjoy.

Ramsay: Until your rotting in the ground. Remember what you are, and what you’re not.

The shot of Theon riding to the gates of Moat Cailin with the Greyjoy banner is haunting. His singularity represents his journey throughout the series so far where no matter how surrounded he was, he always felt lost and alone. Additionally, the graveyard around him acts as subtle imagery to the death (The Starks) that surrounds him. 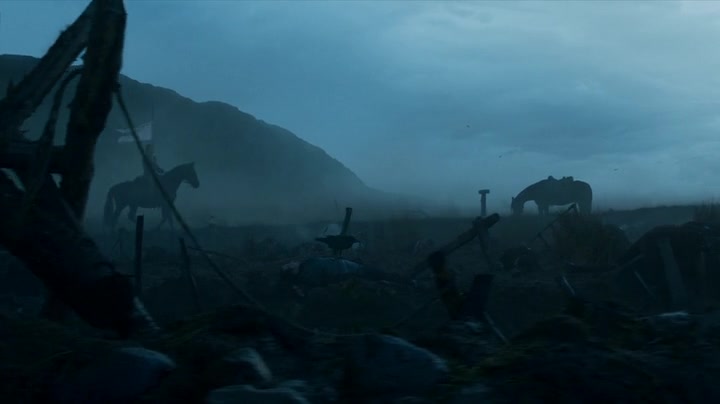 His attempts to free the ironborn are subdued as he’s mocked and called a “whipped dog” for suggesting surrender. Reek struggles between playing Theon and obeying his master as his inner conflict crawls across his face. Their commander takes an axe to the head as the ironborn agree to a surrender and Ramsay flays them all regardless. “You didn’t really think I’d let them go, did you?”

In the Vale, Baelish is questioned following the death of Lysa and is surprisingly vouched for by Sansa who also reveals her true identity. He also snags the support of their soldiers by proposing Robin leave the Vale to train.

Back in Meereen, Ser Barristan receives word of Jorah’s betrayal through a pardon from Robert Baratheon. He is later called before the Khaleesi where she exiles him, disgusted by his betrayal.

Jorah: I have loved you…

Khaleesi: Love…love?! How can you say that to me? Any other man and I would have you executed but you, I do not want you in my city dead or alive. Go back to your masters at King’s Landing, collect your pardon, if you can.

Khaleesi: Don’t. Ever. Presume to touch me or speak my name again. You have until dusk to collect your things and leave this city. If you’re found in Meereen past break of day, I’ll have your head thrown into Slaver’s Bay. Go. Now. 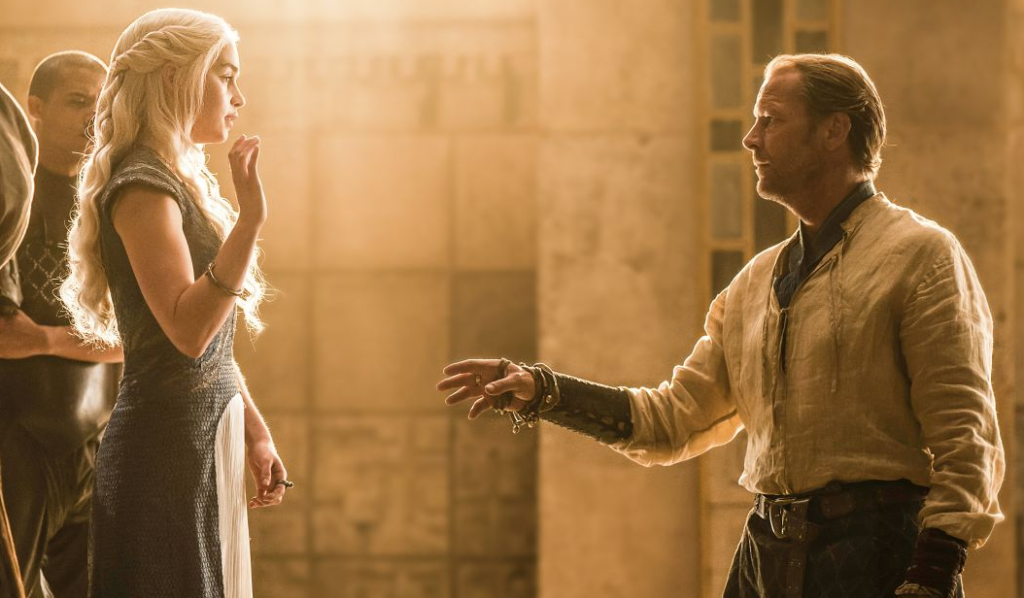 An exceptionally powerful scene from Emilia Clarke and Iain Glen. Both actors perfectly convey the long-awaited confrontation between the two and the wave of emotions between. From Dany’s fiery anguish in the betrayal of the man who she trusted almost her whole life to Jorah’s broken heart and clear remorse, the scene cuts deep and leaves a scar that won’t even begin to heal until next season.

In the adventures of The Stark and The Hound (term coined by Oz, the Unsullied), Arya finds hilarity in the darkness as they finally reach their destination to learn her Aunt Lysa died only three days ago.

The look on both of their faces is ultimately priceless and adds to the many gif-able scenes this episode. Shortly after, it’s worth noting the quote about death Baelish gives to Robin:

People die at their dinner tables, they die in their beds, they die squatting over their chamber pots. Everybody dies sooner or later. Don’t worry about your death, worry about your life. Take charge of your life, for as long as it lasts. That is what it means to be Lord of The Vale.

While he’s speaking to himself in this moment, it’s fun to go back and see that he teased Shae and Tywin’s deaths only two episodes before. His “take charge of your life” statement is especially appropriate once we are impressed to learn Sansa picked up some tactics from him as she explains why she lied. As they prepare to leave the Vale, we are introduced to Alayne Stone aka Dark Sansa.

In Tyrion’s cell, he goes through all the “-cides” finding there’s no word for killing your cousin, another example of his witty deflection defending him from the present. He then reflects on his cousin who found pleasure in smashing beetles with a rock. Tyrion displays his own befuddlement, even weeping for the dead insects, with those who enjoy killing (akin The Mountain). Jamie mirrors his confounded nature and wishes him luck.

Before the trail, Tyrion advises Oberyn wear more armor, at least a helmet (ouch, that foreshadowing) and not to drink before a fight as their fates are linked. Oberyn assures him that “today is not the day I die” and assures a worried Ellaria that he is “going to kill that.” Phew, I thought this might end badly. The two share a kiss and an exchange before the combat begins.

Ellaria: Don’t leave me alone in this world.

The Red Viper shows off his skills with a spear as The Mountain is unimpressed. He doesn’t know nor care who he is referring to him as “some dead man.” Oberyn reveals why he came to King’s Landing and demands a confession for the crimes against his sister.

It’s the first time we’ve seen a spear used as a weapon and it couldn’t have been in the hands of a more impressive fighter. Pedro Pascal channels the venomous tenacity for justice of Prince Oberyn perfectly and quickly, if not instantly, became a fan favorite that will sorely be missed. In a final plunge with his spear (“YOU KILLED HER CHILDREN!”), we breathe easy thinking he’s won. Victorious glances are shared around the audience (Ellaria, Jamie at Tywin, and, of course, Tyrion) as the match appears finished. Oberyn, however, is not. He demands a complete confession and the name of the individual who gave The Mountain the order of execution. He smiles at Ellaria one last time and the tables drastically turn.

And in that moment, we were all Ellaria

Being Unsullied for this episode was especially a treat. You really thought Oberyn was going to win. Not only through seeing him gain the upper hand towards the climax of the match, but also for having his fate linked with Tyrion’s. You “knew” Tyrion would live so Oberyn had to. I remember making the exact motion as Ellaria, grabbing my head in absolute shock at what I’d just seen.

Cersei and Tywin grin as he sentences Tyrion to death in the name of King Tommen.

Fading to black with no initial music for the end credits allows time for one to reflect on what they just watched.

Deaths: Many of those just introduced quickly met their demise as the citizens of Mole’s Town and Ironborn men were executed, Price Oberyn “The Red Viper” Martell also met his gruesome end.

“I’d have killed Joffrey with a chicken bone if I had to.” – Arya
“I’d pay good money to see that.” – The Hound

“Whoever dies last, be a good lad and burn the rest of us. Once I’m done with this world, I don’t want to come back”. – Eddison Tollett

“Today is not the day I die.” – Oberyn Martell 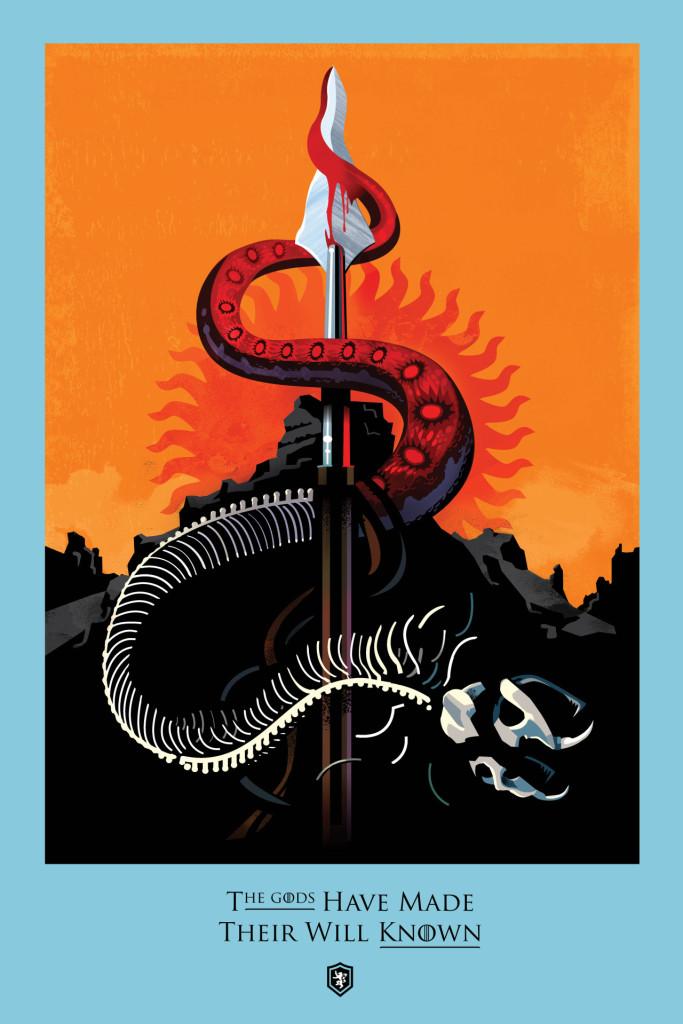 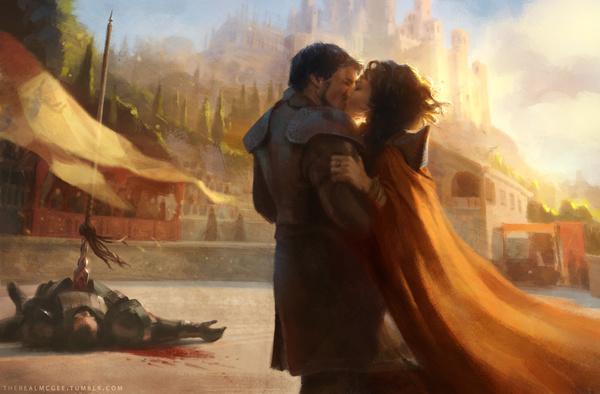 Join us tomorrow for Season 4’s famous exclusive Castle Black episode 9: “The Watchers on The Wall.”