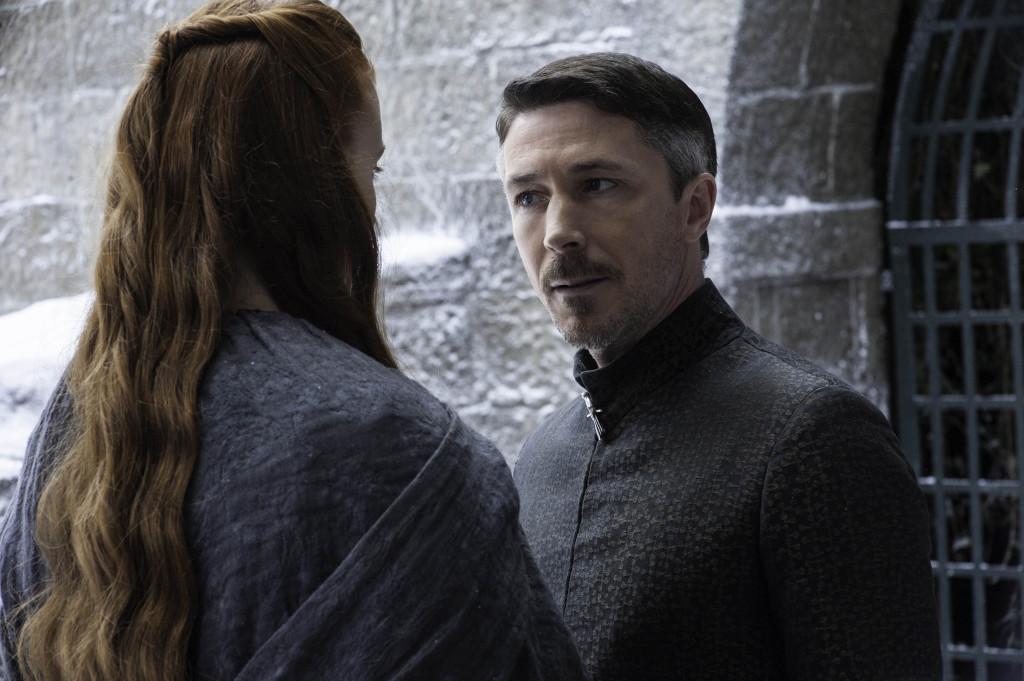 Curious to know more about the distorted mind of our Editor-in-Chief here at WotW? When it comes to the death of a loved one and an episode named after the jackass that killed her, she will choose you to write up a memory about it.

Sorry, but there is something undeniably wrong with that.

Welcome to today’s chapter of How the Westeros Was Won. Game of Thrones Episode 7 of Season 4 featured a man seeking a champion, a young lady seeking her Aunt, and a misunderstood mentally damaged woman seeking reciprocating love. But the mockingbird had other plans… 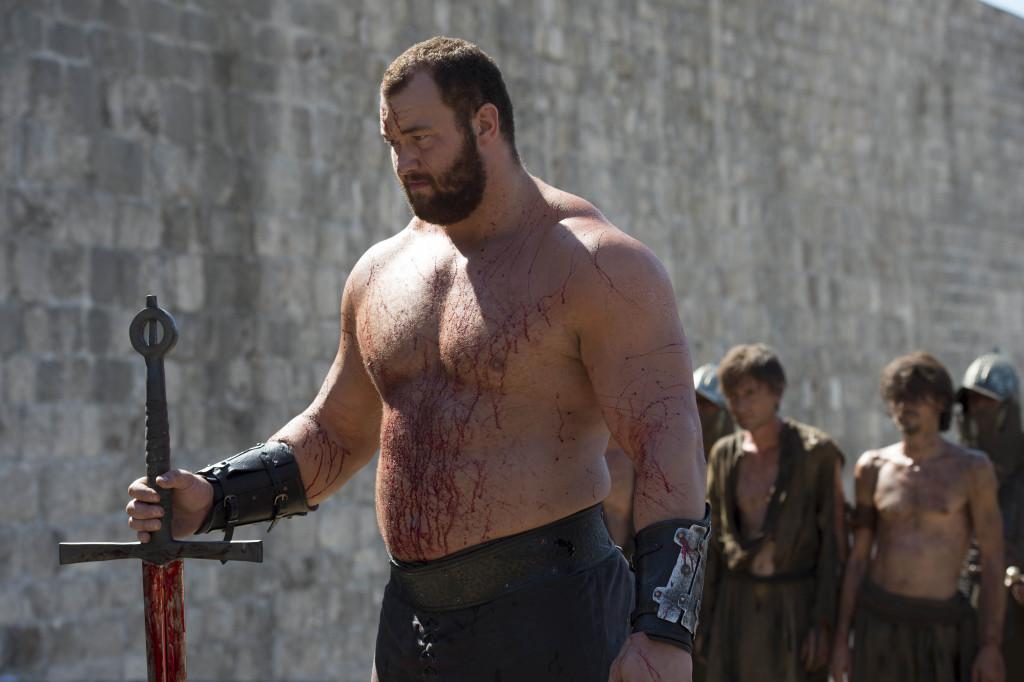 The Mountain returns to KL at the request of Cersei. As he empties human bodies of vital organs for no good reason other than to remind viewers of his beastly strength, Cersei tells the Mountain that he is to serve as the Champion in the trial by combat for the fate of Tyrion. 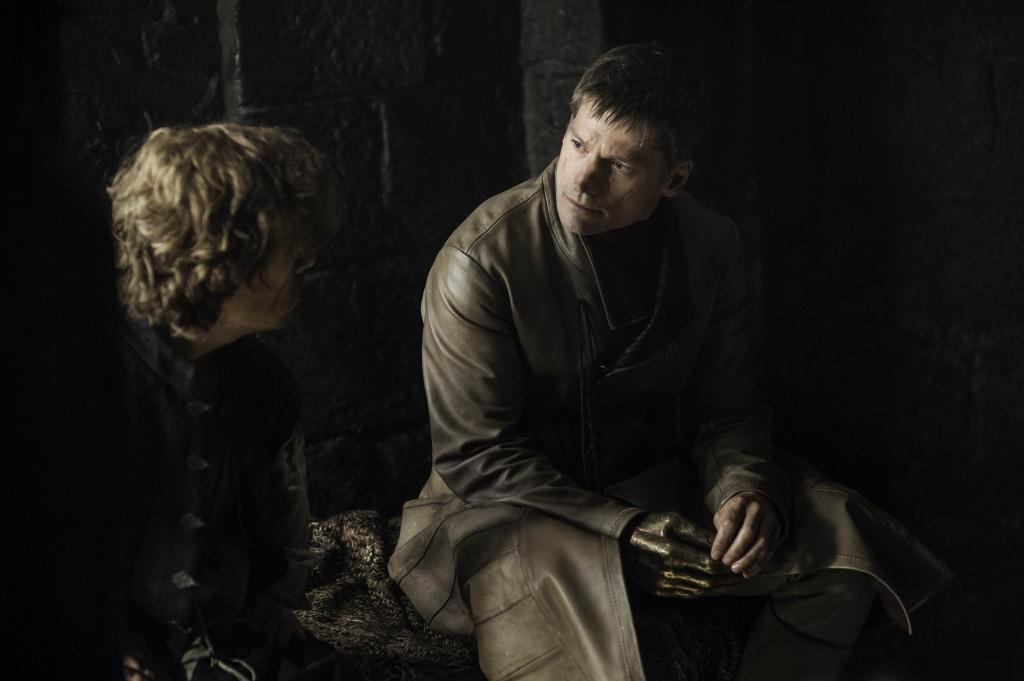 A captive Tyrion is visited by various acquaintances that may potentially be able to offer support. The first is his brother, but Jaime would decline due to his inability to fight effectively with only one hand. 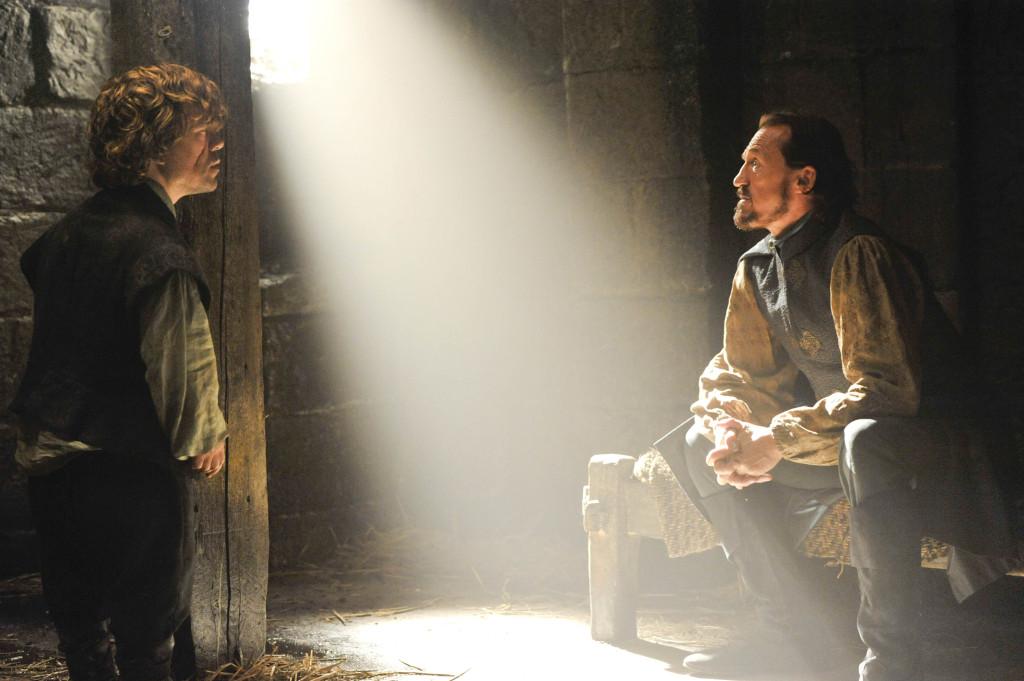 The next would be Bronn who fought as his champion at the Eyrie in Tyrion’s first escape of a trial by combat. However, Bronn would decline citing the strength of the chosen opponent and his bright future with Lollys Stokeworth. 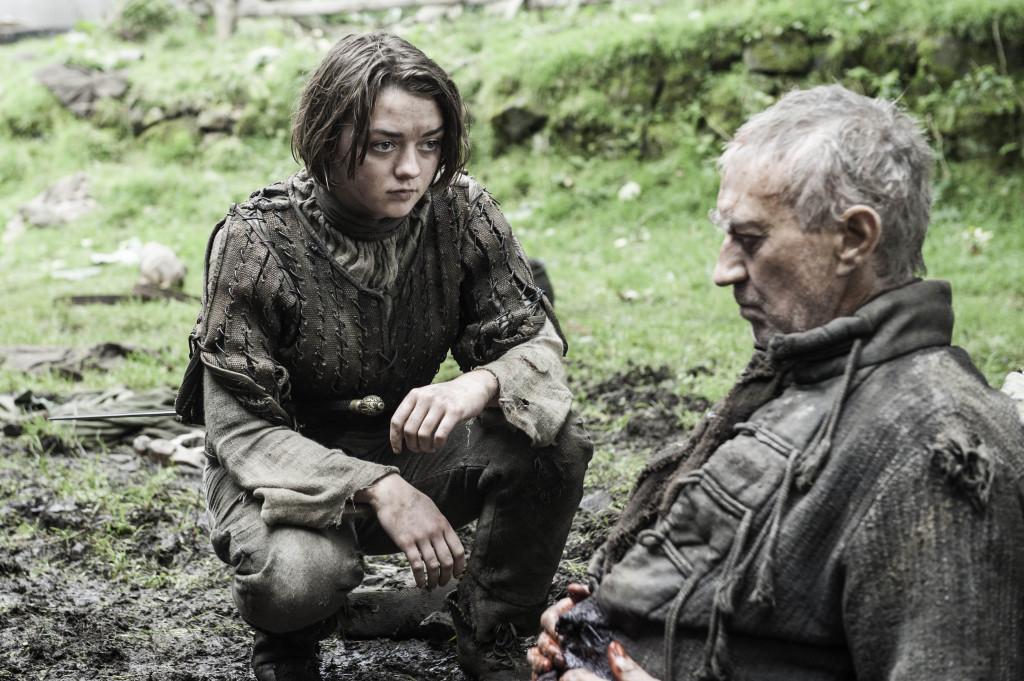 The Stark and the Hound maintain their odd couple adventures en route to the Vale to see Aunt Lysa. And the Hound continues educating Arya on efficient and effective killing procedures as they come across the dying man. 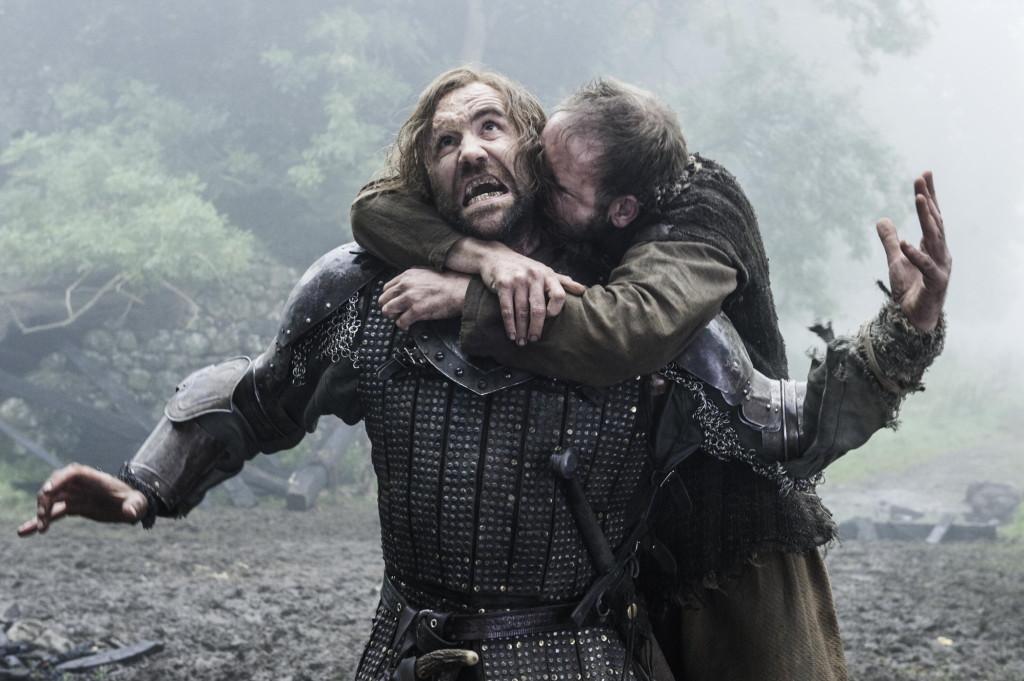 Shortly after the mercy killing, Arya’s old friends and former cell mates of Jaqen would reappear in a poor attempt to collect the bounty on the Hound put forth by Tywin Lannister. Biter takes a chunk out of the Hound’s shoulder before having his head almost twisted completely off, and then Rorge meets needle. 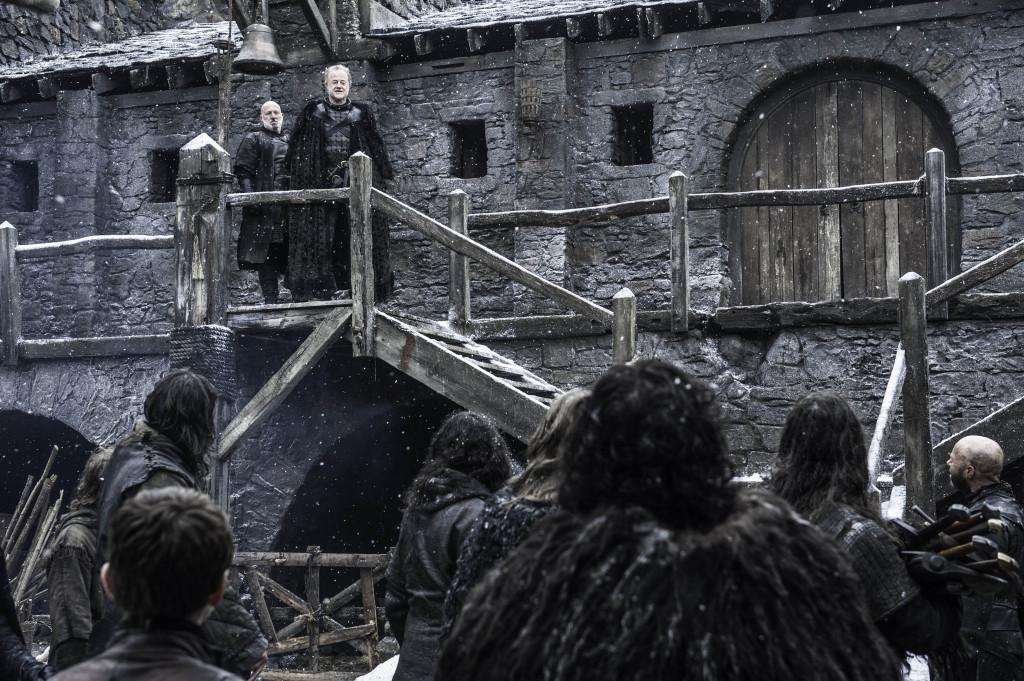 Meanwhile at the Wall, Jon returns and suggests that the best course of action in facing 100,000 wildlings would be to seal the tunnel. But in true Alliser form, he denies the request (a decision that he would later admit to Jon was a mistake). 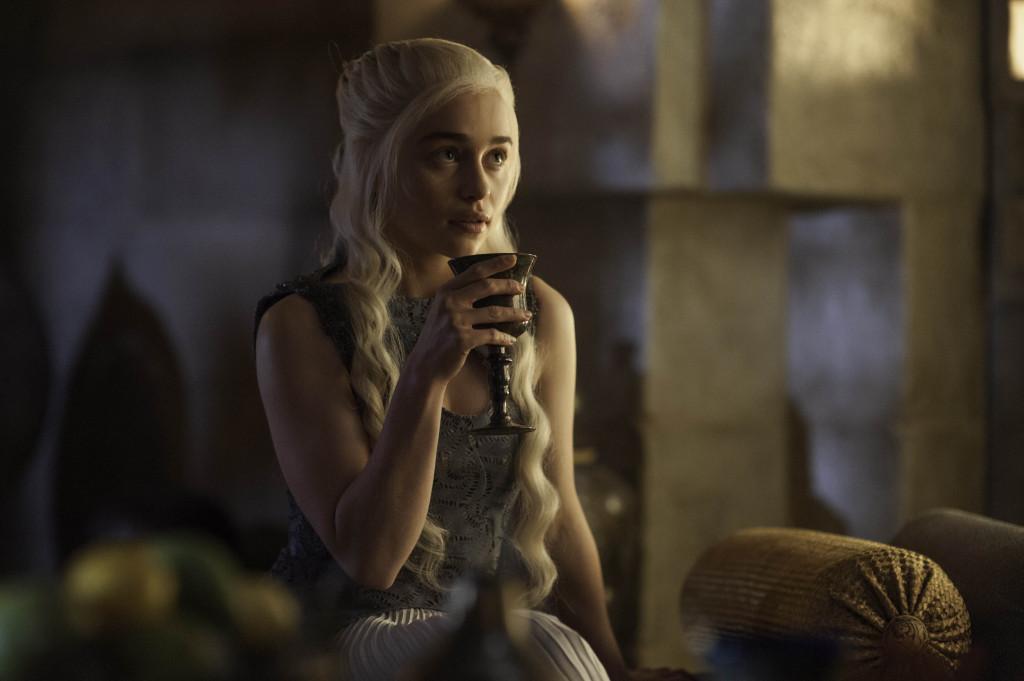 Daario visits Dany and requests that she send him to what he does best… kill her enemies. Much to the delight of women worldwide, Dany requests he do that “other” thing he does best and take off his clothes. The next morning Jorah passes Daario and suffers the burn of all burns when Daario tells him “she’s in a good mood.” Jorah discovers that Dany has sent Daario to Yunkai to retake the city.

Because D&D apparently believe in equal opportunity nudity, Red Velvet enjoys a bath while speaking to Selyse about magic and potions and their upcoming trip. Shireen’s inclusion on the trip is also discussed. For those of you keeping score at home, this was yet another time in which I speculated that Shireen would eventually be sacrificed, and most of you told me I was nuts.

Arya and the Hound would share another bonding moment as the Hound attempts to sew himself up. Arya would point out that the wound needed to be burned. But as we were already aware, the Hound doesn’t care for fire and tells Arya more about the incident between him and his brother and that ultimately, the incident was over a toy. 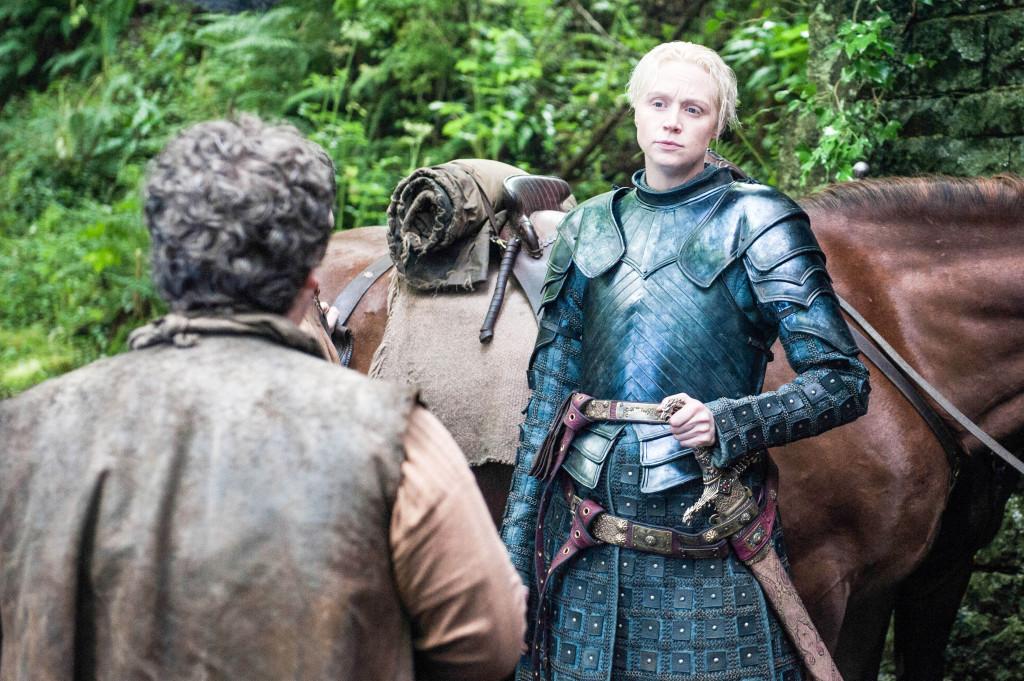 And what would a season be without an appearance by the Pie? Bri and Pod would stop by the Inn for some pie and would get more than they bargained for. Thanks to Hot Pie, the other odd couple would learn that Arya was indeed alive and as a result would make the decision to head for the Vale.

And we can’t overlook the Pie baking advancements… 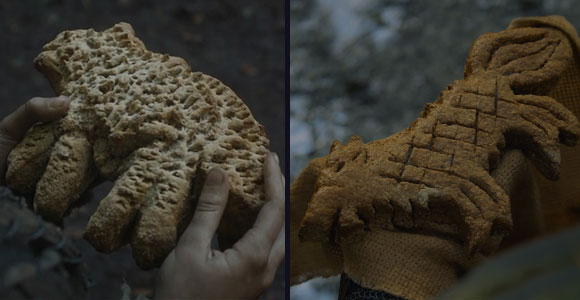 Later, Tyrion’s champion would arrive in the form of Oberyn Martell. Oberyn tells Tyrion of the story of when he was a baby and how he was mistreated by Cersei after their mother died. This matchup was not necessarily a surprise to viewers as Oberyn had mentioned his disdain for the Mountain as early as episode 1 of season 4. The stage was set, and it was a damn good place to end the episode.

But, oh hell no. No one of significance had died yet.

So there was this… 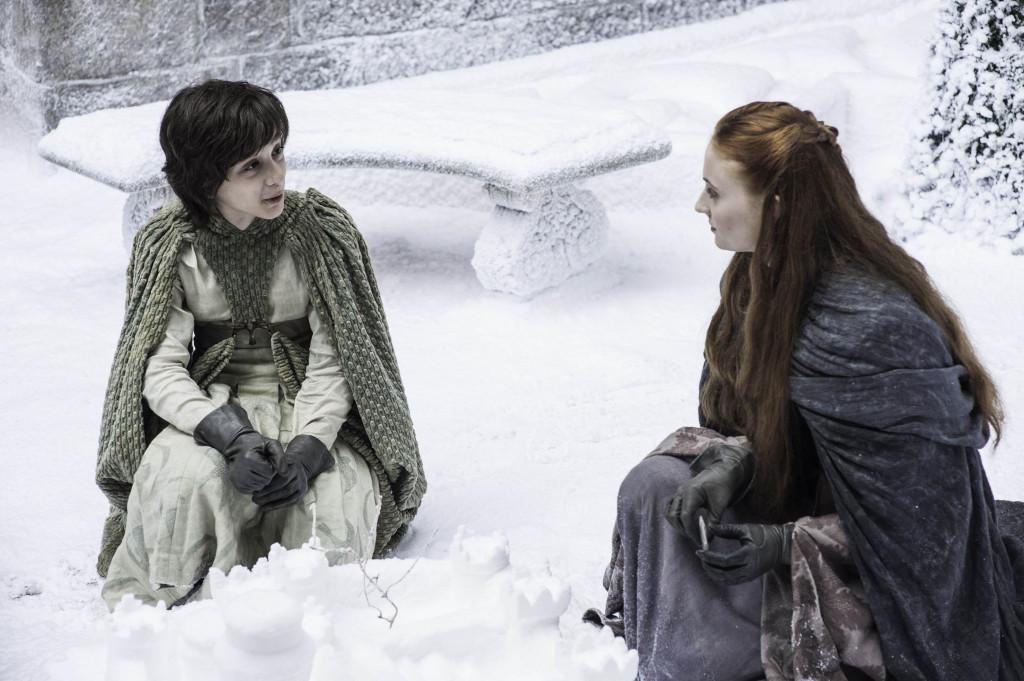 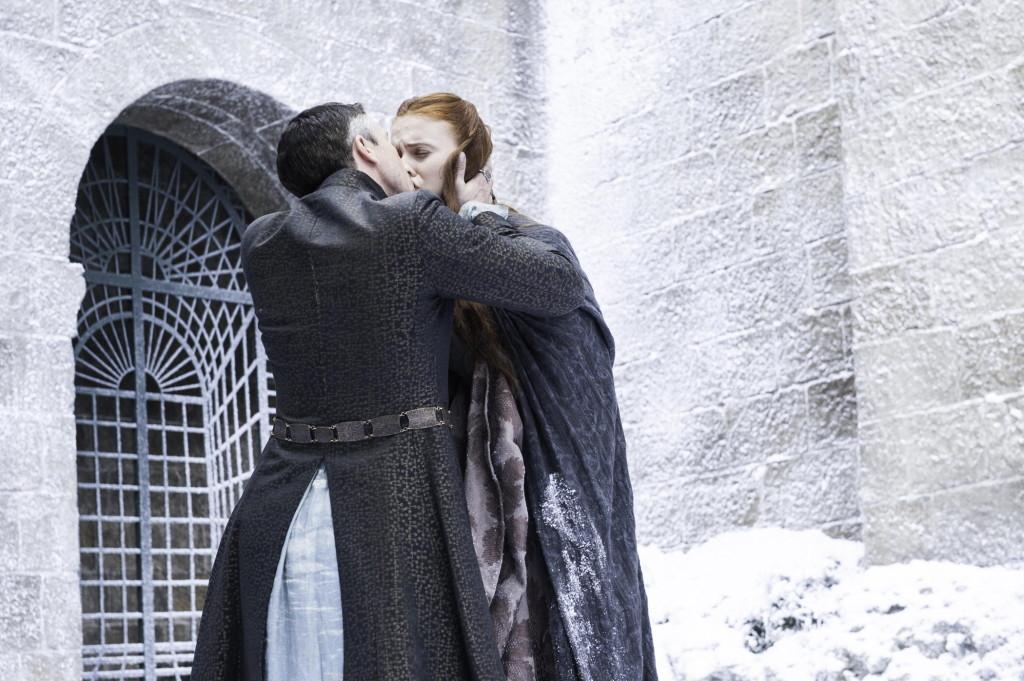 which led to this… 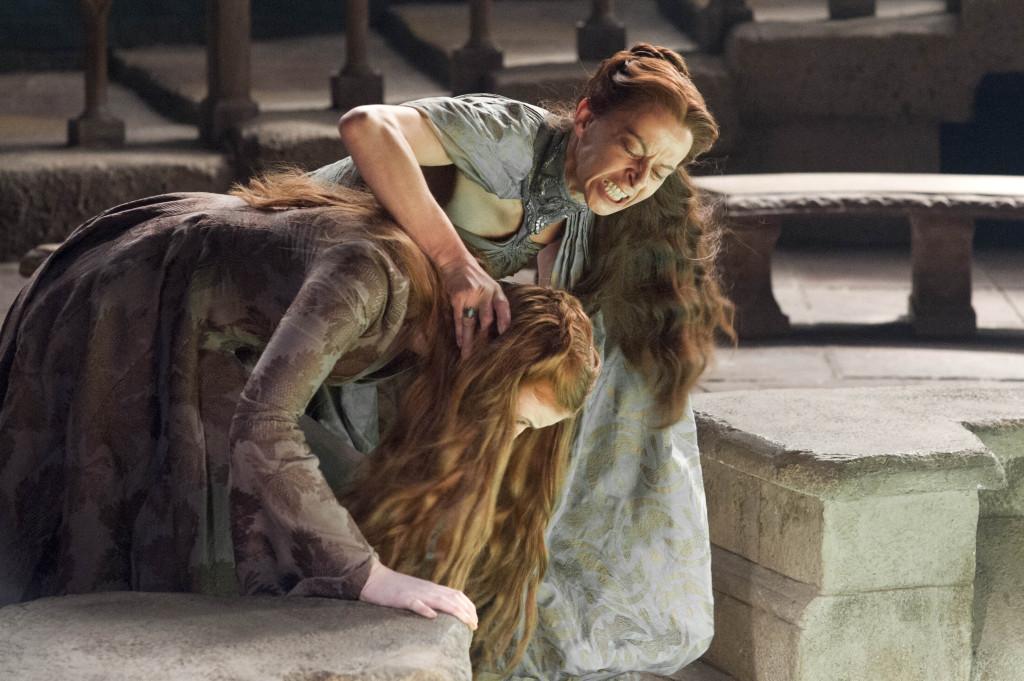 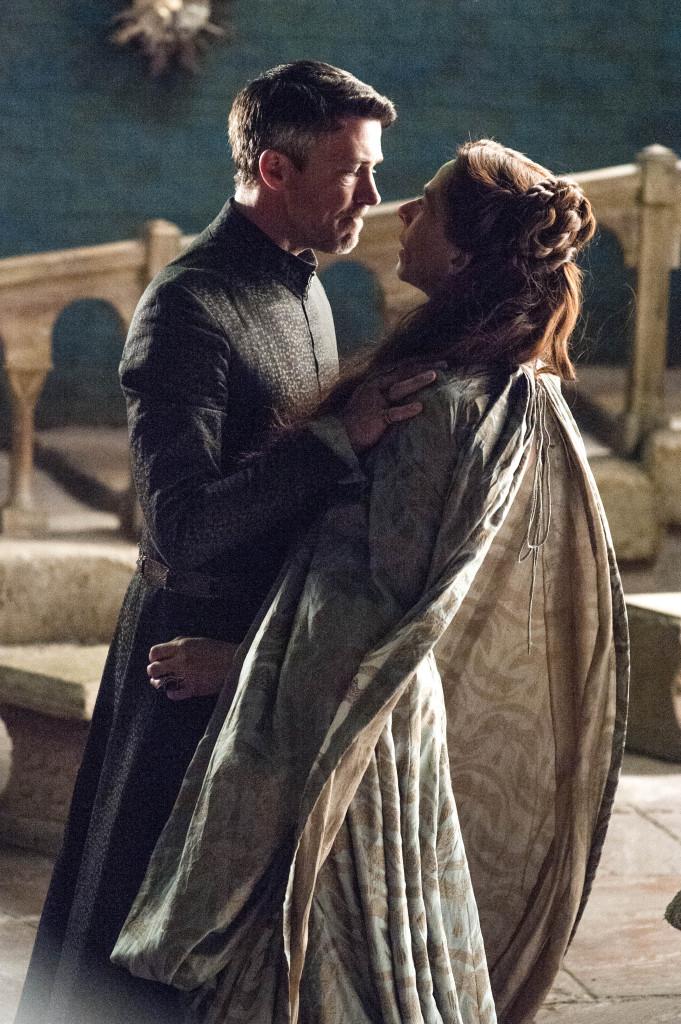 Most of you are well aware of my feelings surrounding Lysa. In contrast, most of you could venture an educated guess on how I subsequently feel about Littlefinger. If you were paying attention, the occurrence itself was not overly shocking. Baelish has always been about positioning himself to be in an advantageous situation to survive, if not to win the game itself. With Lysa gone and Robin still young and immature, her death would leave the Vale and its knights controlled by LF.

But the rationalization doesn’t ease the pain. It doesn’t relieve the grief. It doesn’t mitigate the suffering.

Damn you David and Dan. Damn you GRRM. And damn you Littlefinger. You murdered Lysa for no other reason than to shock your readers and your viewers and to further your own agendas. You could have allowed Lysa an opportunity to be happy if only for a short time longer. You essentially owed it to her for putting the whole damn story in motion.

But you didn’t. You couldn’t even accord her with an honorable ending. Instead, it was dishonorable death by moon door.

Firsts: The Dying Man, the Mountain v.3, Daario’s butt, and the first mention of Lollys Stokeworth and her sister Falyse.

“You’re the golden son. You could kill a king, lose a hand, fuck your own sister. You’ll always be the golden son.” – Tyrion  “Careful. I’m the last friend you’ve got.” -Jaime

“And what about what I want? Justice for my sister and her children.” – Oberyn “If you want justice, you’ve come to the wrong place.” -Tyrion

and that one led to endless possibilities for memes: 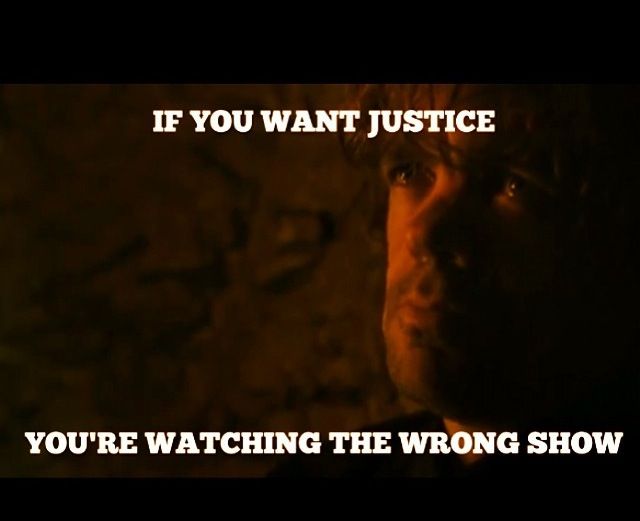 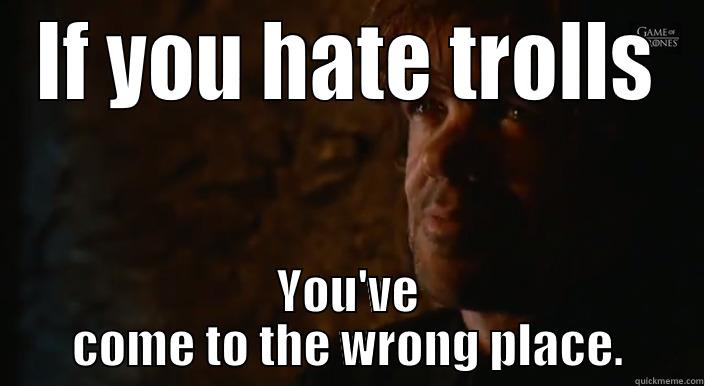 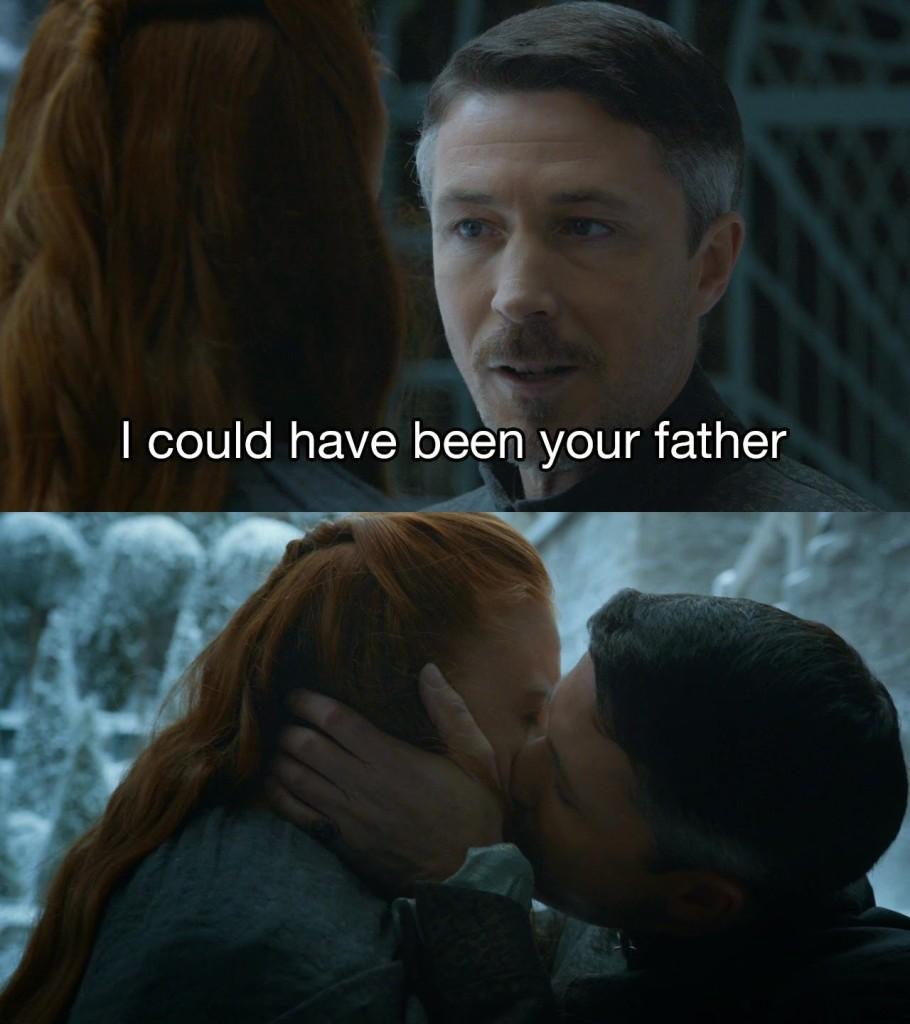 And my dear Lysa’s final scene… 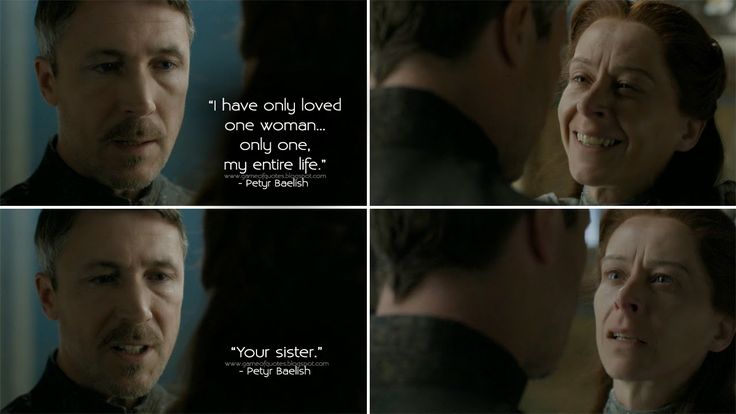 Say what you will about “batshit crazy” Lysa, and it will likely be accurate. But I’m convinced that no one could have pulled off her character like Kate Dickie.

Confession: the Beautiful Death for the ep was quite creative. But make no mistake, there is nothing beautiful about it. 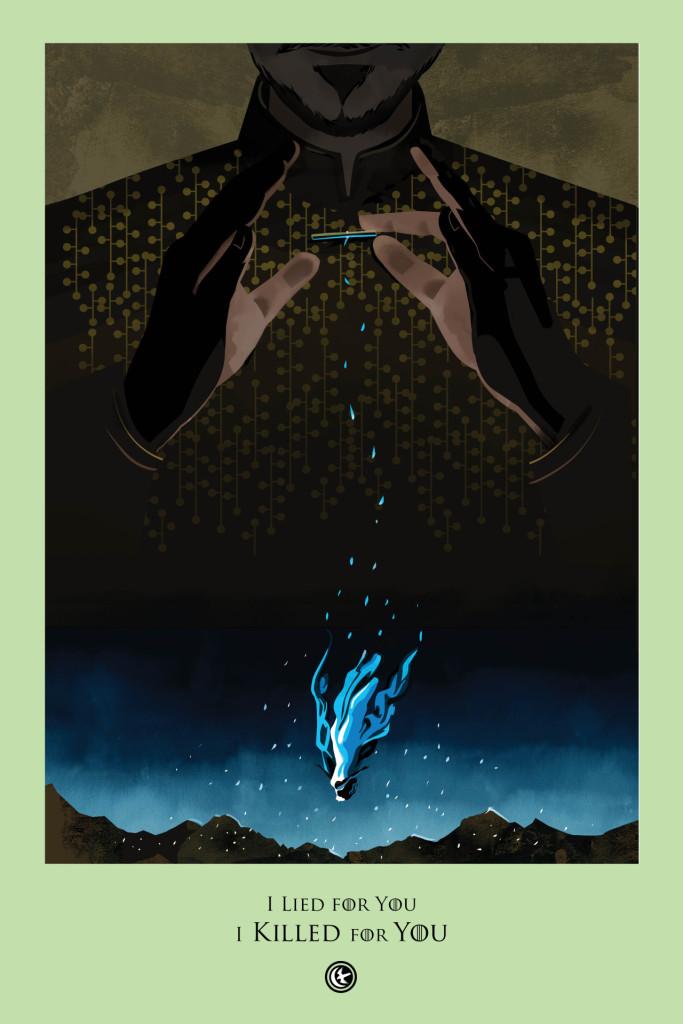 Death stings the victim only once, but those left behind feel the pain of loss with every passing memory every day. But a man must move on.

Two weeks, kiddos! In-season Looking Forward is just around the corner. And rumor is that there is a premiere tonight. We’re on the homestretch.

Get ready, and may there always be peace in your realm. –Oz